The classic isometric RPG finally gets the spit-shine it deserves.

Nostalgia is a powerful force in the entertainment landscape, but even given the sheer abundance of throwback media products on offer, it’s rare to see a revival that can truly match the source material.

Pillars of Eternity II is, to its enormous credit, one of those “exceptions that make the rule”. A follow-up to the eponymous 2015 original, it’s again a game built largely in homage to Baldur’s Gate and the isometric PC RPGs that were popular throughout the 1990s. Pillars II, however, 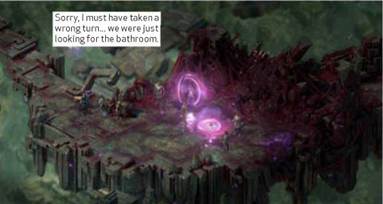 outdoes its predecessor in several key areas — and as a result, itfeelslikeatrue(and modern) heir to the throne.

It gets the basics right.

This is a game that’s as much about negotiating your way through conversational conflicts with myriad multi­cultural fantasy denizens as it is about killing monsters in gorgeously illustrated dungeons. Critically, though, Pillars II polishes up and rethinks the original’s shortcomings — most critically, all in-game dialogue is now fully voice acted, meaning players no longer have to commit to reading reams of speech- rendered-as-text and often feeling like they’re playing an interactive novel. It’shard to overstate how much of a difference this seemingly small change makes to the experience as a whole — it dials up the immersion and engagement, and really makes the world come alive. In short, it makes the game feel, well, more like a game.

Developer Obsidian has also made some smart snips, like limiting your party to a slightly more manageable five characters, rather than six, and they’ve combined that with a customisable and reasonably flexible party AI system that means less stoppingandstarting(and micromanagement) while in combat… although, critically, not so much that you can just pop off for a cup of tea while battles sort themselves out.

The world map has also been overhauled to give players much more freedom — with the setting having moved to the Deadfire Isles (which resembles a sort of colonial-era Caribbean), your home base is now a ship, which you can freely use to sail and explore wherever you like… although there’s no guarantee you’ll be able to handle what you’ll find.

All those new ingredients add up to a reformulated recipe that, while keeping the core flavours largely unchanged, makes Pillars II friendlier, more consistently pacy and — for those who like this kind of isometric-RPG dish — an absolutely scrumptious affair. This is a delicious master work that equals the best the genre has to offer.

Baldur’s Gate fans,your ship has docked: Obsidian has delivered an isometric RPG worth of the classics.