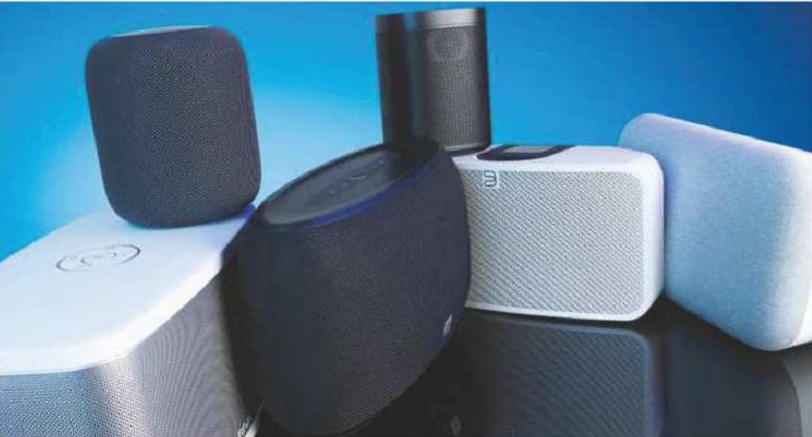 AS WELL AS being vital to voice-recognition tech, any built-in microphones also allow the speakers to calibrate their sound output to suit the layout and acoustic properties of the room they’re placed in. Some speakers, such as Apple’s HomePod, perform this calibration automatically each time they are switched on. But for models like the Sonos One, we follow the instructions in the app and use Apple or Android tablets to manually optimise the sound to the room before listening commences.

Although wired and wireless connectivity options are available, our tests focus on streaming music via a wi-fi network, which provides greater bandwidth for our lossless music files. Apple’s HomePod only works with Apple devices, so we test this with an iPad and iMac computer, while an Android tablet is used with the Google and JBL speakers that rely on Google’s Chromecast software.

Each manufacturer provides its own app to control its speakers, and these also offer access to online streaming services. However, models that support Apple’s AirPlay can stream any music service from any Apple device without needing it to be embedded in the manufacturer’s own app. This gives us the opportunity to stream hi-res MQA material supported by Tidal’s streaming service for the Queen and Johann Johannsson tracks as well as 16/44.1 files.

This crucial process is very carefully controlled so that we get reliable and consistent results in a relaxed and friendly atmosphere. Our listeners must not feel that they’re being tested, despite being unaware of the brand or price of the products they are auditioning.

The session begins by setting the volume level to an agreed point, one that all three panellists feel comfortable with, yet that is high enough to make differences easily discernible. Then the choice of music is agreed – it needs to be familiar, but also well recorded and of sufficient variety to give meaningful listening comparisons. The chosen selection of music is played, and the panellists are encouraged to discuss their impressions of the sound of the product. This is then repeated, and periodically the panel listens to earlier products for reference purposes. The consensus, or otherwise then forms the basis of our sound quality section.

At the end of the session, there’s a final debrief when panellists discuss their findings. It’s an exhaustive process, but carried out in this way is free from prejudices based on brand, price or appearance, while the different sensitivities of the listeners help to round out the analysis in order to make it more widely applicable.

SMART SPEAKERS HAVE been with us for a few years now since Amazon first launched its Echo offering back in 2014. Costing less than £100, its mediocre sound quality hasn’t won it many fans among audiophiles, but it’s Alexa voice-recognition system has proved to be a big hit and kick-started a new category of intelligent speakers almost overnight.

Google’s Home smart speaker arrived a couple of years later, but it wasn’t until Apple unveiled its HomePod in early 2018 that smart speakers finally began to put more emphasis on sound quality and raised the bar for the rapidly expanding sector. It’s a competitive area, and in recent months a number of respected audio manufacturers have updated their own smart speaker designs that look to combine good sound quality with state-of-the-art smart technology and more flexible connectivity options.

Sonos was the first, adding support for Amazon’s Alexa voice assistant to its entry-level Sonos One speaker, which is no longer just a gimmick, but the way many of us now interact with our music systems as we go about our daily routine. With additional features such as multi-room connectivity as well as the option to pair two speakers for wireless stereo sound, it’s worth looking at the full range of features provided by each model to determine if it can form part of a wider music system in your home.

To find out which sounds the best and has the smartest tech, read on…

His master's voice As loudspeaker voice activation technology increasingly favours the big hits and playlists, EdSelley wonders about the future of the album and finding new music As a reviewer, I try to be as open-minded as possible to ...
0
Read full review

KEF has taken its LS50 Wireless active speaker and made it smaller, cuter and more affordable. David Vivian is smitten. Read our KEF LSX Review. Good ideas are usually and usefully scalable. This can mean zooming down as well as up or, in ...
10
$1,249.98 Buy It Now
Read full review

WIRELESS SPEAKERS COME in all shapes and sizes and Samsung’s VL5 has a striking, minimalistic design that mixes seamless white aluminium with a wood finish on either end of our review sample - it’s also available in black. It’s a robust and solid ...
9
Read full review

A relative newcomer in the consumer market, can Riva's years of industry experience give it the edge? As the new generation of intelligent speakers puts an emphasis on sound quality, Clif Joseph listens to six popular models. Wireless Speaker ...
10
Read full review

JBL's considerable audio know-how meets Google's digital tech, but will it be a match made in heaven? As the new generation of intelligent speakers puts an emphasis on sound quality, Clif Joseph listens to six popular models. Wireless Speaker ...
8
Buy It Now
Read full review

A newcomer to the audio market, this is a credible attempt to combine smart tech with strong sound As the new generation of intelligent speakers puts an emphasis on sound quality, Clif Joseph listens to six popular models. Wireless Speaker ...
7
Read full review

It might not be the smartest, but the Pulse Mini 2i offers excellent multi-room and hi-res steaming support. Read our Bluesound Pulse Mini 2i Review. As the new generation of intelligent speakers puts an emphasis on sound quality, Clif Joseph ...
8
$499.00 Buy It Now
Read full review

This compact smart speaker sounds good, but will its unwillingness to play nicely with others hold it back? Read our Apple HomePod Review. As the new generation of intelligent speakers puts an emphasis on sound quality, Clif Joseph listens to six ...
8
Read full review

AS THE SMALLER of a brace of powered speakers, the MusicCast 20 represents the entry point of Yamaha’s wireless speaker range. Read our Yamaha MusicCast 20 Review. MusicCast is the company’s ambitious multi-room system and as well as working on its ...
8
$299.97 Buy It Now
Read full review

THE HOME SPEAKER WAS A HIT WHEN IT ARRIVED DOWN UNDER, BUT DOES GOOGLE'S WINNING FORMULA WORK WHEN THE VOLUME'S CRANKED UP TO THE MAX? Read our Google Home Max Review. As the new generation of intelligent speakers puts an emphasis on sound ...
8.5
Read full review
About 7Review