With a feature checklist as long as your arm, the SR6014 is the real-world star of Marantz’s 2019 AV receiver lineup. Positioned under the brand’s prestigious line of ‘AV’ class separates, yet within striking distance of ordinary mortals courtesy of its £ price tag, it’s a home cinema hotshot that appears to offer everything.

2. The porthole display is a brand staple

Available in black or silver-gold, the design is classically Marantz, with a curved front fascia and dual knobs for input and volume control flanking a circular display window.

This porthole may look cool, but its small size could prove problematic when viewing from a typical sofa distance.

The rear panel is better connected than Richard Branson’s LinkedIn profile. There are seven HDMI inputs, all user assignable and 4K HDCP 2.3-enabled. They’re partnered by a trio of HDMI outs, two of which can feed a TV and screen in a single room, with the third available for second-zone duties.

The HDMI board (v2.0) is well specified, handling 2,160/60p with 4:4:4 sub-sampling, Dolby Vision and HLG compatibility, and BT.2020 passthrough. Low-resolution sources can be upscaled to UHD if you’d rather not leave this to your display.

An eighth HDMI input is provided on the brushed aluminium front panel, behind a fascia trapdoor. It sits alongside a USB port, setup mic jack, analogue AV inputs and a full-size headphone output.

Around the back again you’ll also find four digital audio inputs (two coaxial and two optical), plus a fistful of analogue audio inputs, as well as an MM phono stage for turntable hookup. More unusually, this Marantz provides a full 7.1 phono analogue channel input bank, as well as pre-outs for front, center, surround, surround back and height, plus two subwoofers (11.2).

Pro installations can take advantage of the RS-232C control port, and maybe the receiver’s Crestron Connected protocol support. There’s also an IR flasher input, in case you want to hide the AVR in a cupboard.

In short, there’s nothing you can’t connect to the SR6014, be it a 4K source or legacy games console. The only thing missing is an S-Video input, but I’ll forgive it that.

Easy as you go

AV receivers can be unfashionably challenging to install, but Marantz, like its stablemate Denon, offers a comprehensive graphical guide to simplify things. You really won’t need to scratch you head too hard when putting your system jigsaw together. An intelligent HDMI Auto Input Rename function even saves having to manually label source devices.

The SR6014 employs nine channels of amplification, which means it can be configured for 7.1.2 or 5.1.4 Dolby Atmos. Naturally it can also run 5.1.2, or a flatbed 5.1 or 7.1 speaker array. It’s totally flexible, and speaker terminals are colour-coded.

useful if you don’t want to annoy the neighbours unduly, or other family members. At least that’s the theory.

During initial setup, the receiver guides you through the room calibration process. MultEQ XT32 can store and balance up to eight measurements, with 512-step filter resolution (which I can only guess is a lot). I only made four measurements, because my sofa just isn’t that big.

There’s also Sub EQ HT, which provides individual DSP tailoring of each subwoofer in a dual subwoofer setup, and a live-matching mode to correct the level.

To be honest, I tend to find Audyssey EQ somewhat unpredictable; it’s the sonic equivalent of NTSC (Never The Same Colour). For this audition, it did a reasonable job, but took a bit too much weight out of the LFE channel, which had to be manually corrected (starting by turning Loudness Management off in the audio menu).

The EQ process concludes with the option of Dynamic Volume control, designed to smooth out bumps in volume, 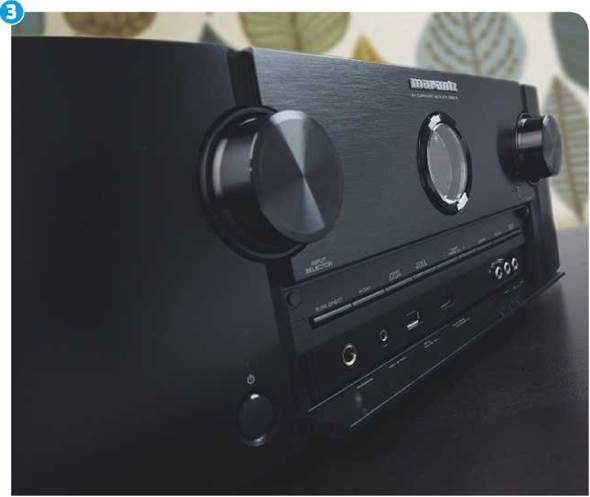 perhaps due to a commercial break. In the UK at least, there seems little reason to utilise this. I also switched off Audyssey Dynamic EQ, which takes a similar approach for when listening at low levels.

The MultEQ system can be further tweaked with the help of Audyssey’s MultEQ Editor app. This is a paid optional extra and worth the outlay if you want to get really involved in system calibration.

The SR6014 is HEOS multiroom compatible. This feature has been common on Denon AVRs for a while, but is being 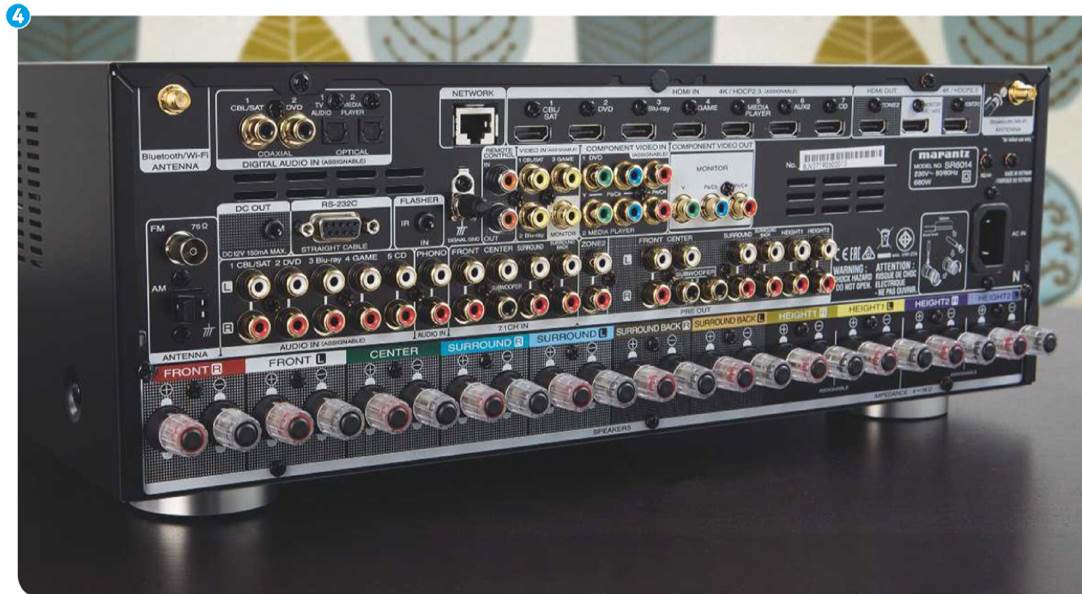 migrated across to Marantz. This could be seen as controversial for a brand famous for its hi-fi advocacy.

What’s new here is the ability to simultaneously stream a two-channel downmix of the primary multichannel output to a second zone. So you could have a movie soundtrack playing in your kitchen, meaning you won’t lose track of the plot when you nip out for popcorn.

And there’s more to come. Bluetooth headphone support is promised before the end of the year, via firmware update. This will bring with it simultaneous multichannel and headphone playout.

Setup and wired in, the SR6014 sounds far from shy. Power output is rated at 110W (into 8 Ohms) with two channels driven, which translates as more than enough power to pressure load the average media room.

Any fears from the broad specification that the SR6014 is a homogenization quickly prove unfounded. Marantz’s Hyper Dynamic Amplification Module (HDAM) circuitry ensures the AVR retains the distinctive, dynamic musicality the brand is known for.

A woodland sequence, replete with chirping magpies, foraging squirrels and cavorting deer, here becomes a symphony of surround elements, all convincingly placed fore, aft and above.

Equally entertaining, but for entirely different reasons, is the opening bombing run to wartime drama Unbroken (Blu-ray), which remains a terrific system-tester. When enemy flak explodes around the room, the Marantz doesn’t struggle, handling the fast, sharp transients brilliantly well.

My neighbour brought round a bag of home-grown tomatoes, even as all hell was breaking loose in the lounge. She looked quite startled. It genuinely sounded like WW2 had begun all over again. The use of proprietary HDAM modules, rather than more conventional op-amps, possibly explains why this AVR can deliver explosions with such whip-crack efficiency. My neighbour threw her toms at me and fled.

Things get even more bombastic when you load up an IMAX Enhanced disc (for this audition I used the new IMAX Enhanced demo platter, there not being any genuine movie discs available yet). The receiver immediately recognised the metadata flag, signposting it as IMAX DTS:X on the info screen, thereby triggering a change to bass management handling.

The buffalo stampede from Alpha duly proves ferociously thunderous. The dynamics of the IMAX soundmix, coupled to the unrestrained brutality of the Marantz SR6014, is literally jaw-dropping.

The soundstage is enveloping and cacophonous, yet blisteringly sharp and clear. More complex sound design can be heard in the disc’s scenes from Bumblebee. When John Cena and his merry troops chase the yellow Autobot through the forest, there’s astonishing precision to the action – gunfire, ricochets, thudding collisions and the musical score are all intoxicatingly drawn.

In fact, there’s something about the character of the Marantz which immediately lures you into the onscreen action. It doesn’t just make a glorious noise, it seems to make an emotional connection through its delivery too. This receiver is empathetic.

While only nine channels of power are available, the SR6014 is capable of 11.2-channel processing, which can be exploited with an external stereo amplifier to create either a 7.2.4 or 5.2.6 speaker layout. And if you’re not able to pepper your pad with ever more loudspeakers, Dolby’s Height Virtualization Technology aims to create a threedimensional soundfield without height speakers or Dolby-enabled upfirers.

Marantz’s SR6014 is a mouthwatering AV receiver. As premium kit, you would expect it to boast an expansive specification, and this is indeed one of the most satisfyingly specified AVRs currently available (the lack of Auro-3D support, previously found on Marantz’s SR7013 and SR8012 models, is hardly a deal-breaker). But it’s also a glorious performer. It’s splendidly dynamic, with a clarity here that’s clinical and musical in equal measure.

Connectivity is class-leading (both regards HDMI and analogue), there’s provision for system expansion if required, and it’s a dream to use. This really is the AV receiver upgrade you’ve been waiting for. Marantz clearly doesn’t just do hi-fi anymore

This superbly specified nine-channel AV receiver is a storming home cinema performer. Your neighbours might not love it quite as much as you will, though.

3. The front flap hides an additional HDMI input, plus USB and headphone out