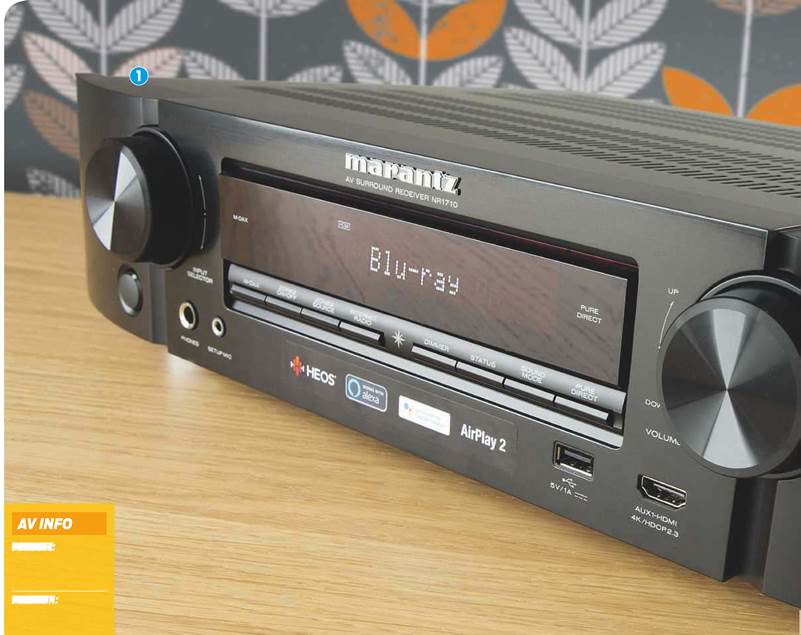 1. The chassis design and panel is unchanged from last year’s NR1609

2. The remote layout is excellent with functions clearly labelled

POSITION: Top of the NR series, below Marantz’s SR models

The NR1710 is the latest space-saving AVR to roll off the Marantz production line, designed, says the brand, to bring the ‘Marantz sound’ to living room environments where, often, a full-size receiver dare not tread. It’s pricier than some rival machines with more boisterous specs. Should you put your discs on a diet?

While fully loaded in terms of features (more on that later), power rating is ‘only’ 90W-per-channel, and closer inspection of Marantz’s data reveals this is a measurement into a 6 ohm load, with one channel driven, a 1kHz signal and 1% THD. Switch to a 20Hz-20kHz input, aim for less distortion and up the load to 8 ohms, and Marantz suggests power drops to 50W. And that’s a two-channel figure.

It’s at this point where your room size, speakers and preferences come into play. If you have speakers with relatively low sensitivity, a listening position a good few metres away from your LCR stage, and a desire to listen at reference level, this isn’t the AVR for you. (And, really, you need a dedicated room).

So who is it aimed at? The style-conscious, perhaps, and those with a lack of space on their AV shelf. But the NR1710 also aims to prove you don’t have to be big to be clever.

Marantz has introduced some new features compared to last season’s NR1609 [see HCC #300]. Chief among them is the ability to run a powered second audio zone using two of the AVR’s seven channels, with the same source as your movie room (downmixed from multichannel) or something else. If that’s of no interest, you can use those channels for a 5.1.2 or 7.1.2 cinema setup. And if you only want trad 5.1, the step-down NR1510 offers just that.

Other 2019 talents are Dolby Atmos Height Virtualization, eARC functionality and (via a firmware update that should land very soon) Bluetooth headphone support.

Features you’ll find higher up the Marantz ladder that are missing here are IMAX Enhanced functionality and the brand’s proprietary HDAM amplifier module design. But much else is shared across the range – including HEOS multiroom integration (with its lineup of streaming services), Amazon, Google and Apple voice control, Apple AirPlay 2, and Bluetooth/USB/network streaming.

Connectivity is a bit Jekyll and Hyde. Something we’ve highlighted every time we’ve looked at one of Marantz’s NR models is the inclusion of a lone HDMI output. Two would be better, especially at this price – sister brand Denon’s AVR-X2600H costs less and has twin HDMI outs. But one is all you get, alongside a component video output that might as well be bunged up with Blu-tack.

On the plus side, there are eight HDMI inputs (one on the front panel next to the NR1710’s USB port), and analogue and digital audio inputs, too. Note there’s no analogue multichannel in/out, and no provision to expand the AVR’s seven-channel presentation with external amplification.

Design-wise, this is a fetching slice of AV. It retains the curved fascia of its bigger brothers, but at half the height the effect is more stylish. It also replaces Marantz’s usual ‘porthole’ display window with something more traditional (and better).

The handset is about as button-stripped as any AV receiver zapper is likely to get.

It’s also really intuitive to use, with good labelling of keys. It’s not backlit, though.

Ease of use is a major facet of the NR1710, in fact. The step-by-step setup process is brilliant, and the (online) user manual clear but detailed. Take time to rename your sources, hide ones not used from the front display, and create up to four Smart Select modes (which automatically switch to a source, volume level and sound mode), and the UX is even better.

System calibration is delivered by the Audyssey MultEQ suite, in the base (non-XT32) iteration. A self-assembly cardboard stand is provide to accurately position the microphone, and you’re required to take at least three measurements (covering your three- seater sofa, basically). This isn’t a system or AVR for dedicated tweakers (although manual channel EQ is an option, and there’s decent >

flexibility when it comes to setting your own subwoofer crossover), but Audyssey’s optional Editor App introduces more scope.

For on-the-fly adjustment, there are centre and subwoofer level sliders, plus tone control.

The NR1710 followed a beefier, full-size Pioneer VSX-934 on my test bench, but I never found it wanting for power. By the time it began to sounded a little ragged, I was easily at higher volumes that I’d normally listen to.

Marantz is often cited as having a house sound, one of musicality and refinement, and (with stereo music playback in particular), this shines through here. In partnership with two Q Acoustics 3010i standmounts, it brought a strong mid-range clarity and subtlety to Lynyrd Skynyrd’s Cheatin Woman, giving the plaintive vocal its own space above the bluesy basslines and keyboard work.

It’s a lucid presentation, without a trace of a hard edge.

The Atmos soundmix of Leon: Director’s Cut (4K Blu-ray) requires more in terms of precision, steering and soundstage cohesion. Running in 5.1.2 with Focal’s Sib Evo package, the NR1710’s sound is tight and snappy, and the power plant doesn’t struggle to up its game for hard-hitting effects. Chapter 4’s apartment block raid is tense and dramatic. Gary Oldman’s monologue is breathy yet distinct, while shotgun blasts crack with dynamism.

The wind-swept game of cat-and-mouse at the end of The Equalizer 2 (4K Blu-ray) sounds even better.

The NR1710 remains in control while the hurricane rages and LFE effects are chucked about with abandon.

When Denzel Washington leaps out to attack an unsuspecting baddie, the slice of his knife-blade is deliciously sharp and quick.

Less is often more regards post-processing options, although some might find Marantz taking this notion a bit too seriously. Dolby Surround and DTS:X upmixers are on hand to scale flat soundtracks to your 3D system, and Dolby Height Virtualization and DTS Virtual:X pledge to create a 3D soundstage without any overhead/upfiring speakers at all, and that’s pretty much it.

Virtual 3D audio is an interesting idea, but no one should expect it to completely succeed. The Dolby mode did have a tangible impact when I stripped the system down to 2.1-channel, though. With The Equalizer2’s full-bore soundmix, it seemed to push audio elements a little further into the room. For non-Dolby sources, Virtual:X is similar, but I found it more aggressive in its processing.

Creating its own niche

A slight – and surprising – niggle concerns the NR1710’s remote, which I found slow to react at times. A bigger concern for Marantz is this receiver’s competition. The price tag elevates it beyond some other, traditional seven- channel designs (include some from Denon), and not that far off its full-size, more powerful SR line. Its slim design, broad specification and engaging sound performance make it very easy to recommend, however

3. As well as HDMI, the NR1710 has plenty of analogue hookups

Q ACOUSTICS 3010i CINEMA PACK: A gorgeous 5.1 system that offers excellent value for money gets you four standmounts, a matching centre and a compact sub – and a performance that suits the Marantz’s articulate performance.