Thorens TD 148A Review – Automatic for the people

Who wants the inconvenience of having to get up and lift the needle out of the groove at the end of every LP? Thankfully, Thorens has a retro solution to an age-old problem. Read our Thorens TD 148A Review.

Looking back to the Seventies, you’d be forgiven for not being disappointed about the number of innovations that the turn of the Millennium actually delivered. From a Jetsons-like fantasy’ where everything is automated, flying cars are the norm and every house has a robot butler, the reality comes across as something of an anti-climax. And it’s easy to understand why. Back then you could be woken by a teasmaid that had prepared your brew for you or could sit back and listen to music as your turntable of choice did all the heavy lifting so you could listen from the comfort of your sofa. Arguably the pick of the automated turntables was Thorens TD-224, which first appeared on the scene in 1962. Like something from a Doctor Who episode, it gave a tantalising vision of the future by picking a new record from a stack alongside the platter every time the previous LP reached the end in order to keep the music flowing. While music streaming solutions are undoubtedly the current day equivalent, they lack the Heath- Robinson charm of automatic vinyl spinners, and so it is something of a retro thrill to reveal that the TD 148A that sits before US here is Thorens latest addition to its current range of fully automatic turntables.

As the flagship offering from the German company’s fully automatic models, the TD 148A bears more than a passing resemblance to the semi-automatic TD 1601 (HFC 470) with its TP92 tonearm. However, the new TP95 cold drawn tube with its rubber/alloy damper collar fitted halfway along its length takes over proceedings here. It comes, of course, with a counterweight and spring- loaded downforce adjustment. Its bearing housing has also been given an update so that it now is more in line with other Thorens offerings as well as not looking too dissimilar from what we’ve seen from fellow­compatriot Dual.

Otherwise, the Thorens DNA running through the TD 148A is unmistakable. The plinth comes in a choice of walnut and gloss black finishes and the belt-drive system at its heart is powdered by a 12V DC motor run from an external PSU. Proriding plenty of torque, start-up time is impressively speedy though it’s not the quietest motor you’ll ever see. The Thorens branded belt is looped around a plastic sub-platter onto which a 2.3kg glass platter rests. A bundled felt mat sits on top of this and a choice of three speed settings (33, 45 and 78rpm) is provided by a switch on the left of the chassis.

Setup is suitably simple and even vinyl virgins should find that they’ll be up and running with little in the way of stress. Simply remove the transportation locks, fit the belt, place the platter guide over the spindle and add the mat. Tracking force and anti-skating are easily adjusted, thanks to dials on and around the base of the tonearm’s gimbal housing. Placement on a level and solid surface is essential as the feet are not adjustable and. for that matter, not especially convincing when it comes to absorbing the nuntable from external ribrations. Ortofon’s 2M Blue

moving-magnet cart comes supplied, while a hinged dust cover that easily attaches to the back is also bundled.

Though not especially heavy, there’s a reassuring robustness to the chassis and an impressive build quality that ensures that the controls are light, but convincing in action. Look under the hood inside the plinth and the machinery that makes the magic happen in terms of automation is a marvel of miniature engineering.

Operation continues the theme of simplicity. Choose your speed, set the record size lever to the appropriate position (30cm for a 12in and 17cm for a 7in) and then press Start – it’s that easy. The TD 148A now takes over, spinning the platter up to speed before elegantly lifting the tonearm and gently placing the stylus into the lead-in groove. Once the record reaches the end (or the control lever is moved into the Stop position), the mechanism reverses the process, gently lifting the arm and returning it to its resting position before switching off the platter. Should you wish to do so, you can ignore the auto system and operate things manually in the traditional way, but why would you want to? The only minor niggle is that there is no auto-start setting for 10in discs, which considering that 78rpm is available feels like a bit of an – admittedly minor – oversight.

When it comes to fully automatic decks, Thorens really has the ‘serious’ end of the business fully covered off. Yes. there are a number of relatively lightweight, lower cost plug-and-play ‘USB turntables’ available via the online mass market retailers, but these are not always what we might call proper hi-fi. For that you should revisit Thorens’ comprehensive semi- and full-auto ranges, from the TD 190-2 right up to the high-end suspended sub­chassis TD 1601 with its electrical lift and auto shut off

In much the same way that the automatic controls enable the listener to forget about returning the tonearm to its resting place, the performance similarly makes it easy to ignore the hi-fi capabilities and just enjoy the music. Partnered with PMC’s twenty5.24 floorstanding speaker consistency is the key takeaway here: the TD 148A handling treble, mid and bass with equal sensitivity and control. Arguably the main reason behind this is the Ortofon 2M Blue, which although typically adds some sparkle to proceedings here sounds neutral – suggesting that the deck itself has a slightly soft disposition.

The top-end is both sweet and clean, with plenty of detail easy to pick out. This is all presented with an appealing sense of poise and polish so that cymbals and high percussion are reproduced with no hint of hardness.

Kicking things off with Vivaldi’s Four Seasons, it seems apposite to put the 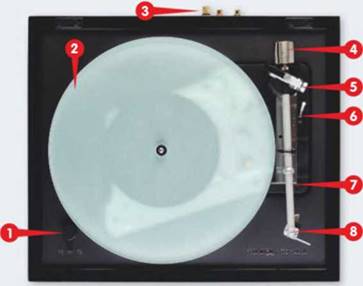 Thorens through its paces with the Spring movement. As the chorus of violins soars out into the room it’s difficult to escape the feeling that though the Ortofon 2M Blue is a great performer, it is at heart an affordable design with a tendency to occasionally over step the mark. The result is that while there is an appropriately thrilling sense of energy to the performance it is very much at the expense of any sense of subtlety.

Pleasingly, switching to music with a more electronic or acoustic lilt sees some of the finer nuances reappear. For example the accompanying piano on Runrig’s The Story displays the sort of warmth and richness that’s more commonly associated with far costlier rivals. There is just the right amount of overhang to every note to evoke the impression that you’re listening to a real instrument in a believable acoustic. From the same album. Rise And Fall delivers superbly focused central images with the vocals of Bruce Guthro and Rory Macdonald locked bang in the centre of the soundstage as they belt out their parts. The flipside of this, however, is that there’s a slight dilution to the action taking place in the far flung boundaries of the soundstage. And so it proves here, with the stereo images convincingly marshalled to the fore resulting in the focus being on specific hotspots across the width of the stage,

The desire for automatic turntables dates back to the early days of vinyl when the four to five minutes of muic per side offered by 78rpm discs necessitated frequent visits to the record player to flip sides. The Victor 10-50 from 1927 was perhaps the most popular domestic offering. However, as long players superseded 78s in the Fifties the need became less of an issue,  although automation still remained popular.

In the Sixties, the likes of Garrard and Thorens ensured that just because a turntable was automatic it needn’t eschew hi-fi sensibilities, and the LAB80 and TD-184 respectively proved to be enormously popular among the more discerning audio enthusiasts that liked to stay in their armchairs.

And the trend continued into the next decade as Japanese innovation ensured that automation became the go-to feature as prices increased. Arguably the Eighties saw the last hurrah for the feature as linear- tracking tonearms became the norm, making the sci-fi vision of fully automated playback a reality. The Nineties witnessed the decline in popularity of vinyl full stop, so it was no surprise that as interest in the format waned the outlay required for diminishing sales no longer added up and manual operation became the order of the day. The more recent vinyl revival has seen add-on options such as the Little Fwend Automatic Tonearm Lifter (HFC 447) introduced and useful though it no doubt is, it’s no substitute for the real thing.

rather than painting a big and uniform musical picture. With the main vocals located in the centre of the soundstage, both the backing instruments and vocals appear more tied down to the left and right speakers. As a result, the backing vocals on Rise And Fall are too easily drowned out by the main protagonists, rather than complementing them. It’s like listening to a three-channel setup (left, right and centre speakers) where there is little in the way of overlap between the three.

And it’s not just vocals. Ordinarily, the solo piano on Elegy reveals some distinctive background effects as the pedals are used, however here these are once again squeezed out into the background leaving the energy of the performance to dominate.

While all of this is going on the lower registers are pretty well represented. Throughout the testing period the bass remains firm, fairly detailed and decently tactile. While it won’t offer the sort of thump to the sternum that the very best can when fed a pounding dance beat, its typically taut handling of rock and pop music is more than up to the job. Correctly sited on a level surface, the turntable never flounders or booms and is able to pick out deeper bass elements with apparent ease. Upper bass is more vividly detailed still as the TD 148A’s excellent speed stability blesses it with an impressively secure sense of tunefulness. The bass guitar starts and stops with clean precision, while the woody resonance and richness of acoustic bass sounds entirely believable – very much as we’ve come to expect from Thorens.

Easy to setup for beginners and seasoned audiophiles alike, the TD 148A is beautifully built, user friendly and offers the sort of convenience in use that is ideal for those that don’t want to have to leave the comfort of their armchair. Admittedly, it does fall a little short of the high standards that are set by Thorens’ manual turntables – particularly when it comes to soundstaging – but the inclusion of the Ortofon 2M Blue is a worthy addition. Whether or not you’re willing to make the compromise for the cake of convenience is something you’ll have to decide for yourself •

Easy setup, great convenience and a solid performance, but the sound stage is rather curtailed at times

THORENS TD 148A Fully-Automatic 3-Speed Turntable with Cartridge (Black)
out of stock
as of September 27, 2021 1:41 pm
BUY NOW
Amazon.com

£369.00
Added to wishlistRemoved from wishlist 0

£299.00
Added to wishlistRemoved from wishlist 0