WHILE SOME DESIGNS fade into history, others leave a permanent mark. The striking yellow Kevlar drivers of Bowers & Wilkins’ 601 speakers mark them as an example of the latter, and now, two decades after they were launched, the 600 series has grown up, just as many 601 owners will have. Read our B&W 607 Review. 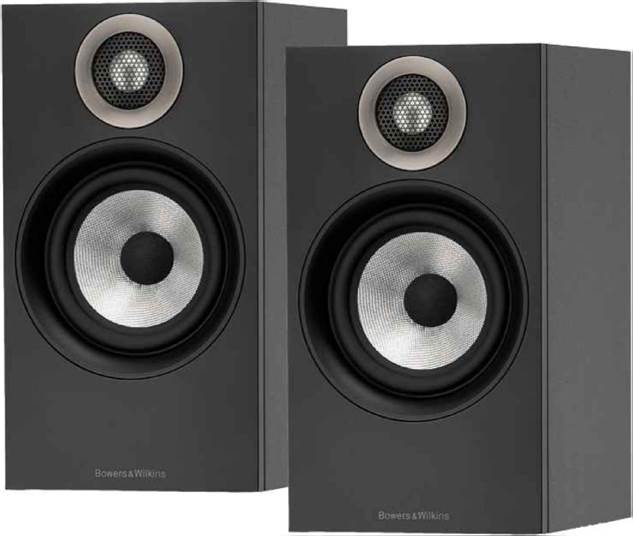 The 607 is the smallest and cheapest speaker set in Bowers & Wilkins’ new 600 series family. Taking the place of the previous 686 S2, the 607 sits alongside the slightly larger 606 and the floorstanding 603. There’s also a matching centre speaker, the HTM6, and a trio of active subwoofers for adding the .1 speaker to home cinema systems.

The 607s are genuinely compact bookshelf speakers. They measure 30cm tall and a sliver over 20cm deep, but they’re razor- sharp performers in their weight class. Bowers & Wilkins’ ‘Continuum’ cone technology has trickled down from the top-ranking 800 Series Diamond range, and features alongside a new, decoupled tweeter design. The result is a supremely detailed, incisive sound; it’s truly impressive how much music flows from such little boxes.

The 607s are the very definition of understatement. Housed in a plain, monochrome box with sharp, clean lines, you can take your pick of black or white, depending on which better suits your tastes.

They might not be as striking as some of their rivals, but there is something rather mature about the new 600 Series. Gone are the garish yellow Kevlar mid-range drivers of yesteryear: the silver cone of a 130mm B&W Continuum driver now takes centre stage, with a rim of classy brushed metal skirting the redesigned tweeter above, and the reflex port has been moved to the rear of the cabinet.

The tweeter is a new aluminium double dome design. This is shielded from prodding fingers by a thick metal mesh, and is physically decoupled from the cabinet surrounding it.

It’s an ingenious piece of engineering: the tweeter is suspended within a rim of silicone rubber, and this prevents vibration from the mid-range driver from travelling through the cabinet and affecting its high- frequency performance.

Other changes are merely aesthetic. B&W has swapped the speaker grille pegs for hidden magnets to give a cleaner look when the grilles are off. At the rear, a pair of binding posts allows you to use the 607s in singlewired, bi-wired or bi-amped setups.

As with most of its speakers, Bowers & Wilkins recommends the 607s are mounted on stands, placed at least half a metre from rear and side walls, and placed between one-and-a-half and three metres apart.

That obviously won’t be practical in every room, but the pair of port bungs in the box make it possible to tune the bass response to suit less-than-perfect positions. Those bungs can be used to completely seal the rear ports, or you can remove the central cylinder of foam to partially block the port and subtly reduce the bass output.

In our listening room, we got the best results by leaving the ports wide open and mounting both the 607 speakers on top of a pair of heavy, sand-filled Atacama stands about two metres apart, toed-in slightly and well away from any walls.

To their credit, the 607 speakers remained unfazed even by challenging tracks.

There obviously isn’t the chestcompressing weight or dynamic slam you’ll get from larger speakers, but the soundstage is pleasingly deep and wide and, what’s more, the tiny speakers do a fantastic job of driving the pounding rhythms forward while revealing every detail and texture in recordings.

Listen longer and harder, however, and it’s clear that the 607s are not a forgiving pair of speakers.

The pronounced lift in the upper treble unearths huge amounts of detail, even at the low volumes that make them perfect companions for late-night listening, but it also ruthlessly exposes bright or harsh recordings, and bright-sounding ancillary equipment. Partner the 607s with an in-your-face DAC, amplifier or record player, and your ears may not appreciate the onslaught.

While this can have the positive effect of teasing every whisper of detail from a pop or rock track, even conservatively produced recordings can veer towards excessive brightness at high volumes. The 607’s insight into the recordings is phenomenal, but it comes at the expense of mid-range warmth.

A similar story unfolds across even the best classical and jazz recordings. While most, if not all, sound fantastic – the 607s’ pinpoint detail, soundstage depth and imaging allows instruments to live and breathe between the speakers – the treble lift means that those instruments also sound lightweight and thin. The tonal imagery the 607 presents is eye-popping in its clarity, but it’s the aural equivalent of Photoshop.

When they’re in their element, however, the 607s are an intoxicating listen. For psychedelia and electronic music in particular, the 607s’ enthusiasm has the knack of transporting the listener into the very heart of the recording.

While it could be expected that the 607s’ mature, monochrome aesthetic would be partnered with an equally safe, sensible character, the reality is that they are anything but. For a small pair of speakers, they’re both incredibly exuberant and scalpel-precise, and while that won’t be to everyone’s tastes – especially when the Q Acoustics 3010i sound more than good enough for less than half the price – their bold, unapologetic character proves very compelling indeed.

Bowers & Wilkins has reimagined its classic 600 Series, and the 607 offer a thrilling sound profile