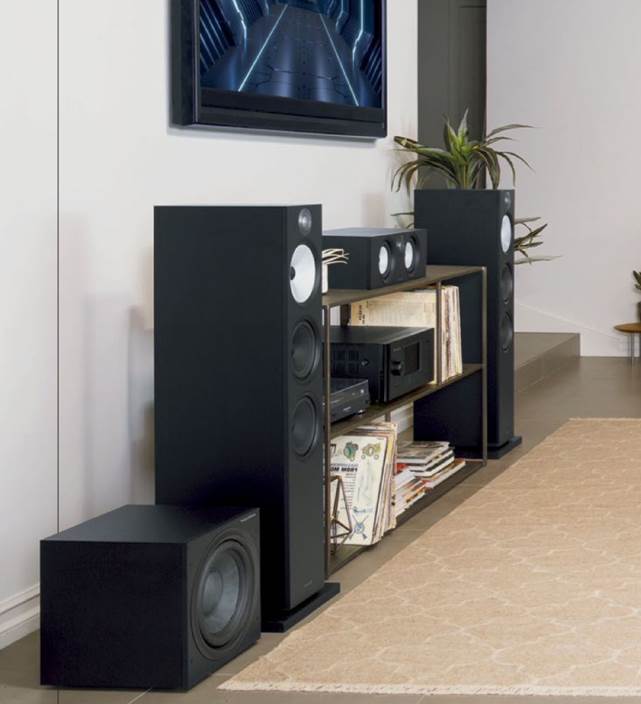 The floorstanders and standmount designs in B&W’s 600 Series can be used on their own for great stereo, but put them together and you have the makings of a serious 5.1-channel movie surround sound system.

Here at Best Buys Audio & AV we have been reviewing Bowers & Wilkins loudspeakers for, literally, decades. In all that time we’ve yet to be disappointed by them. That continues with the new B&W 600 Series, now up to its sixth generation.

Just to put things in context, the B&W 600 Series is the company’s, well, ‘entry level’ series of full-sized speakers. Of course, B&W also has compact systems for a variety of purposes. Above the 600 Series are three more expensive ranges: the 700 Series, the 800 ‘Diamond’ Series, and the legendary and unique Nautilus stereo speakers.

There is one set of floorstanding speakers in the range, a centre channel, two bookshelf speaker-sized models and three subwoofers. For this review we listened to a package for surround sound, which included the 603 floorstanders and the HTM6 centre speaker at the front, with the 607 compact speakers for surround — they’re the smaller of the two bookshelf-sized models — and the ASW610XP subwoofer.

That subwoofer is top of the three available models, and it consumes nearly 30% of the total cost of the system, so let’s start with that. In fact there are two 10-inch models (plus an 8-inch one): this ASW610XP and the ASW610. Both are compact, with the ‘XP’ only a little larger than the other one. But at over 18 kilograms, it’s nearly 50% heavier, and with 500 watts on tap, has 150% more power. We’re assuming that the ‘XP’ means ‘eXtra Power’, and that much of the weight is due to a sturdier enclosure. It has both line inputs and speaker-level inputs, and it has separate level controls for the two. In addition to the regular controls, there’s also a three-position switch for bass extension (the best -6dB point is specified at 18Hz) and a two-position switch for EQ, to allow some tuning for location. It comes with both screw-on feet and spikes. The grille is removable and the finish is black or white, with a black or grey grille. That’s the colour scheme across the range.

All the full-range speakers share the same tweeter. It’s an aluminium-dome model. Actually, B&W call it a ‘Decoupled Double Dome’, which is a design that the company has been using in its various ranges for some years. This one is recently upgraded.

It comes with an extended tube behind the tweeter body, a concept drawn from the Nautilus which is intended to gracefully dissipate rear energy from the driver. ‘Decoupled’ means

that it has some mechanical isolation from the exertions of the larger drivers. Over the front of the dome is a sturdy wire mesh to protect it.

The 603 floorstanding speakers are three-way models. Underneath the tweeter is a 150mm FST Continuum cone midrange. This uses a Kevlar-like weave, but the finish is silvery rather than yellow, and B&W has yet to reveal exactly what it is made of, likely for fear of copying, as happened with its classic yellow Kevlar. And beneath that are two 165 mm bass drivers. Crossovers of 400Hz and 4000Hz are used, so the midrange covers the most sensitive frequencies without interruption.

These speakers come with a good-sized plinth to extend the speaker’s footprint, providing greater stability. The tweeter height is just a hair under a metre from the floor with the plinth and spikes installed. As with all the speakers, they are bass-reflex loaded with rear ports, and they permit bi-wiring.

The 607 standmount speakers have the tweeter plus a 130mm Continuum cone for bass/midrange, covering down to 52 hertz. They have a rather low sensitivity of just 84dB.

The centre-channel HTM6 has the tweeter and two of the 130mm drivers. Its bass response is fairly limited — 72 hertz — but it is more sensitive than the 607 speakers at 87dB.

We installed this speaker system with each unit in the usual position, creating a 5.1-channel surround sound system. We have ceiling speakers installed and our AV receiver (a Denon AVR-X3500H) supports overhead channels from Atmos and the like, but we left them switched off since they weren’t part of this system.

The Denon receiver was happy to auto-install the speakers. It set all the speakers to a ‘Small’ size with the bass crossover at 60 hertz. We fiddled with trying out the front left and right speakers at 40 hertz, but in the end returned to the 60 hertz setting. It provided a more balanced sound on wide-ranging content. We switched off the default EQ and left the speakers with their native sound, processed only by the receiver diverting that sub-60Hz bass to the subwoofer.

The Denon receiver is rated at 105W per channel, so a middling output. Given the quite low sensitivity of the 607 speakers used for surround, we were a little concerned that they might run out of capacity — or the amplifier might — with surround-heavy material. That turned out not to be the slightest problem.

We ran through several of the movies and scenes which truly test the surround performance of a speaker system, not least the street battle in ‘Heat’. That has much-louder-than-usual gunshots from the full 360-degree soundstage, including the rear and side/rear directions. The 607s didn’t falter in the least, happy delivering the bite and impact (supplemented a little by the sub) that this scene required.

For a more up-to-date cinema sound we tried out the opening catastrophe Superman is inflicting on a city in ‘Batman v Superman: Dawn of Justice’. Given all the buildings being destroyed, this has a bass-heavy track, and even at near-cinema levels it was delivered with power and authority by the system. But it was this which decided us on switching the front crossover frequency back to the higher setting. The front speakers seemed to be lacking just a little of the truly deep stuff.

We do confess to liking deep, deep bass. Clear and tight, of course, but strong bass extension is one of the things that really tickles us. The subwoofer with this system simply belied its size. The bass was clear and tight, and we expected nothing less from a B&W subwoofer. But it was also remarkably extended. With ‘Titan A.E.’ there was a true sense of bodily impact during the opening minutes as the earth is destroyed.

We don’t think that was from the 13Hz parts of the LFE channel on this movie, but there was certainly significant stuff in the 20Hz region, and even a bit below.

There was also plenty of capacity in this subwoofer. It went loud. It wasn’t so much a matter of keeping up with the other speakers in the system. It was more a question of whether they could keep up with it. Don’t worry, they could.

But we would not be averse to combining this sub with a higher-end speaker system. As it was, given the dependence of the whole system on the subwoofer for deep bass, it proved to meld pretty much perfectly with the other speakers both in surround and stereo modes.

Just to make sure our impressions were right, we measured the output of the subwoofer, with our measurement microphone placed up close to the sub’s cone. It came in at 21 to 111Hz ±3dB. Add one more decibel of latitude and it reached out to 145Hz at the top end. And for the -6dB point? We had it at 18.3Hz. That’s pretty incredible from a subwoofer that’s a little more than a foot on a side. It shows what a good company can do with gobs of power and a very, very sturdy box.

When we did our stereo listening, we did what we normally do: we chose the ‘Direct’ mode on the home theatre receiver. With Denon receivers that cuts out the subwoofer and ensures that there is no signal processing. Part way through the stereo listening we changed our listening regime. You see, while we enjoyed the sound immensely from the pair of 603 speakers, and had they been the sole elements of the speaker system we would have remained satisfied, we felt that even with stereo music they would benefit from the addition of a little more bass. So we switched to ‘Stereo’ mode, and made sure all processing was switched off except for the bass crossover.

With that added heft, the sound was extremely good. With or without, stereo imaging was excellent, with a fine three-dimensional sense. With that sub in place, tonal balance was very nearly perfect, with no emphasis on any part of the spectrum over the rest, and fine detail throughout.

‘Entry level’ is a relative term. The Bowers & Wilkins 600 Series system again demonstrates that an ‘entry level’ floorstander-led B&W loudspeaker system is better than top-of-the-line systems from many other brands.