We report on a classic with a modern twist as Spendor launches a flagship inspired by its iconic 1970s models. Read our Spendor Classic 200Ti Review.

As any hi-fi enthusiast will know, Spendor has an illustrious history, its co-founder Spencer Hughes creating the company’s first speaker, the BC1, using knowledge he’d gained while working at the BBC in the ’60s. Yet for the past decade the brand has been working hard to reinvent itself, its affordable A and higher-end D series selling into the mainstream speaker market.

At the same time, however, Spendor has continued to make its Classic range, a series of speakers that embody the spirit of its original ’70s designs. Now it has plans to revamp all of these models, with the flagship Classic 200Ti being the first to be unveiled.

The 200Ti you see here is the very epitome of this approach (the standard walnut/cherry finish). However, it’s only ‘retro’ up to a point – even if the speaker’s appearance might lead you to surmise otherwise. Spendor doesn’t employ old technology to painstakingly recreate the sound of past classics like the BC1. Rather, the drive units used – as well as the build and engineering – are as contemporary as those found in the company’s A and D series [see p25].

The 200Ti is a sealed-box, wide-baffle, three-way design – features all pretty much de rigueur back in the ’70s when they were also the mark of a serious loudspeaker. Measuring 1087x370x513mm (hwd)

and weighing 55kg, the cabinet is large compared with those found in Spendor’s contemporary range and also dwarfs many other floorstanders on the market. We’re talking old-school British engineering here, and if you’re not careful when manhandling these speakers into position you could find yourself booking an urgent appointment with your osteopath.

The cabinet features relatively thin side panels that are lightly-braced but have viscoelastic damping pads bonded to their inner sides. These panels – finished in walnut – are attached to a rigid front baffle finished in brushed titanium. Spendor says the former are designed to flex slightly at low frequencies in concert with the speaker’s bass drivers, but that the cabinet suffers virtually no audible movement at mid or high frequencies.

This structure is said to add what the company calls ‘charm’ to the music, meaning the speaker has a subtle coloration baked-in by design. This has been carefully voiced to bring a ‘warmth’ to the sound that Spendor says many listeners And ‘irresistible’.

The two 310mm bass drivers have been developed specifically for the larger loudspeakers in the Classic series and have a diecast alloy chassis allied to a rigid, light Kevlar-composite cone.

New suspension and surround materials have also been brought into play, said to

‘The acoustic guitar flew into the room with superb attack’

bring improvements in linearity compared with the 12in Bextrene-coned woofer used for every large Spendor Classic since the launch of the BC3 of 1973.

At 550Hz these twin bass drivers hand over to a 180mm midrange unit fitted with the company’s beloved EP77 polymer cone, and this uses a cast magnesium alloy chassis. High frequencies come courtesy of

Finally, the speaker cabinet, which has tri-wire terminals on the rear, sits on a dynamically-damped plinth finished in satin black that has four levelling feet attached via forged-steel inserts.

A grille that attaches to the front via magnets completes the package.

The Spendor 200Ti is an unusual combination of old school and modern design and, as a result, rewards with a sound that is highly distinctive.

It is effortless, barrel-chested, open and highly dynamic and all this is possible with the cabinets positioned close to the rear wall. Indeed, thanks to the infinite baffle design, you can happily place the 200Ti less than a metre into the room.

Mind you, there’s no getting away from the sheer physical size of this speaker, but if you’re looking for a big box able to move a lot of air yet do it with real authority and control, then the 200Ti deserves to be heard. It packs its almighty punch in a way that’s measured and civilised, rather than trying to be the biggest headbanger in town.

Tracks such The Beloved’s ‘The Sun Rising’ [Happiness; WEA 2292-46253-2] showed this to great effect. It features a powerful looped bassline with lower notes that many smaller speakers are simply unable to resolve. However, the 200Ti was meticulous about carrying each and every one, regardless of all else that was going on, such as the synthesiser glides, vocals, percussion and lead keyboards.

At listening levels so high that many rival designs would be breaking up, the 200Ti simply kept pounding out this bassline, largely devoid of cabinet boom or ‘time- smear’. There was no sense of any exertion and as every additional layer of sound was added to the mix – building in a dense crescendo – the speaker stayed clean. This is a feat you rarely hear from domestic hi-fi loudspeakers of any type or price.

The 200Ti also has the ability to go very loud, and to do so effortlessly. What’s more, it tracks the dynamics of a piece of music faithfully, so one can easily follow the accenting of even relatively quiet instruments. The acoustic guitar on Fourplay’s ‘Once In The A.M.’ [Between The Sheets; Warner Bros WPCP-5506] certainly isn’t the loudest instrument in the mix yet the 200Ti followed it brilliantly. And whenever a single string was plucked hard, the sound of it flew from the speakers and into the room with superb attack.

Yet there’s a pleasing tonal smoothness to the presentation too. Feed the 200Ti a rough, fuzz-box drenched indie rock track such as Teenage Fanclub’s ‘What You Do To Me’ [Bandwagonesque; Creation Records –

BACK TO THE FUTURE

The 200Ti has what company CEO Philip Swift describes as ‘the heart, soul and style of the original Spendor Classics, but with advances in performance and appearance’. Its roots stretch back to the classic Spendor BC3, which sold from 1973 to 1984, and the original BC1 of 1969. The BC1 was notable for its use of a then-innovative 200mm Bextrene midrange cone, which was similar to the KEF B200. Above 3kHz, a Celestion HF1300 tweeter took over up to 13kHz, whereupon a 20mm Coles 4001 supertweeter handled the highest frequencies.

Delivering all this was a sophisticated 14-element crossover, but Swift says the crossover used in the new 200Ti [see inset, right] is superior, thanks to the use of precision wound inductors and high-linearity plastic film capacitors to better integrate the drivers. ‘Careful attention has been paid to ensure that the new loudspeaker presents an easy load,’ Swift says, ‘one that is compatible with a wide range of amplifiers, from powerful solid-state to the most esoteric tube designs.’

CRE CD 106] and one is easily able to pick through the mass of layered guitar effects to appreciate that this is in fact a very tidy and well marshalled production.

In fact, here we see Spendor’s ‘charm’ manifest itself. This track has a really grungy feel, but the 200Ti gentrified it slightly, smoothing its rough edges. This didn’t detract from the sheer fun, because there was detail to be heard that often lies undiscovered with so many other designs. For example, the drummer’s constant pan rolls, right at the back of the mix, were clear to hear.

The smooth tonal balance extends to the bass, which is smooth and subtly sweet, and there’s never the sense that the low end is overpowering the rest of the music. The midband was unfailingly even, never pushing itself to the fore yet still allowing obviously ‘well lit’ recordings to reveal themselves.

For example, The Dolphin Brothers’ ‘Catch The Fall’ from their 1987 album of the same name [Virgin CDV2434] sounded suitably shiny. This production features lots of bright-sounding electronic instruments and the 200Ti duly confirmed this, but even at high volumes it didn’t grate or annoy.

The track’s heavily-processed cymbal sound was delicately handled, confirming my thoughts that the tweeter used here is a classy item, as it had also made an especially silky job of the ride cymbal work in the Teenage Fanclub track.

True, those coming from speakers with premium ribbon tweeters may find a subtle lack of air and space with some recordings. But few of the rivals that better the 200Ti in these terms are a match for its physicality and controlled power.

Indeed, the sheer physical size of this big Spendor seems to have been deployed to deliver a wide bandwidth sound, rather than copious bass. Its size also appears to help with its soundstaging ability, because it is easily able to conjure up a cavernously wide sonic picture when required. Isaac Hayes’ ‘Cafe Regios’ [Shaft: Original Soundtrack; Stax 0025218880220] was hugely expansive, the brass and strings enjoying oodles of space around them, while individual instruments, such as the rhythm guitar, were portrayed with pin-point accuracy.

Spendor’s new 200Ti should raise eyebrows in the high-end loudspeaker market. It’s a great all-rounder with an enjoyable, likeable character that is huge fun to listen to. What’s more, it will slot right into many rooms and systems with ease. There are ‘market watchers’ who might regard Spendor’s Classic range as being a little too quirky, but this new flagship speaker is both mainstream and highly capable.

Although it has a large cabinet, the 200Ti uses closed box bass loading, which reduces sensitivity and/or bass extension compared to reflex loading, so Spendor’s claimed 89dB sensitivity is impressive. We weren’t able to verify that figure, though, our measured pink noise figure being 1.6dB shy of it at 87.4dB. But there is an upside to this: as we’ve come to expect from Spendor, the 200Ti avoids presenting a challenging load to its amplifier and is thus easier to drive than many competitors. Although our measured minimum impedance modulus of 5.1ohm suggests that a 6ohm nominal impedance would be more appropriate than Spendor’s specified 8ohm, this is a relatively high figure these days and it’s accompanied by well- controlled impedance phase angles. As a result the minimum EPDR (equivalent peak dissipation resistance) is a relatively benign 2.4ohm at a high 920Hz, where 1.7ohm is more typical.

Forward frequency responses, measured on the tweeter axis with the grilles removed [Graph 1, below] show an essentially flat trend, without a presence band dip, and the irregularities sufficiently small to limit the response errors to ±2.5dB and ±2.3dB – excellent figures for a three-way passive speaker.

Pair matching over the same 300Hz-20kHz frequency range is first class too at ±0.8dB. Diffraction-corrected nearfield LF measurements showed the bass extension to be 43Hz (-6dB re. 200Hz), with mild peaking (about 2dB) at 70Hz suggesting that the bass alignment may be slightly underdamped. The cumulative spectral decay waterfall [Graph 2, below] evinces some low-treble resonances, the strongest associated with the response peak at 6kHz. KH 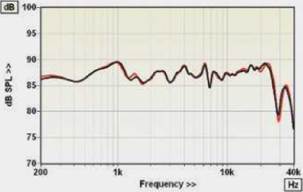 ABOVE: The 200Ti’s response is impressively flat in trend, though bass is slightly underdamped 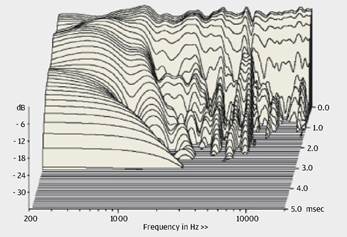 ABOVE: Cabinet is well damped but (midrange) driver resonances are visible through the treble at ~6kHz 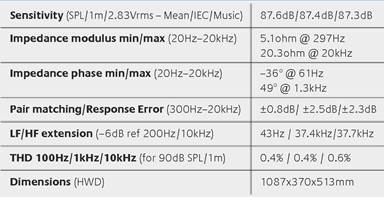