A packaway portable projector capable of creating bigscreen entertainment wherever you go, even on battery power. So cool! Read our BENQ GS2 Review. 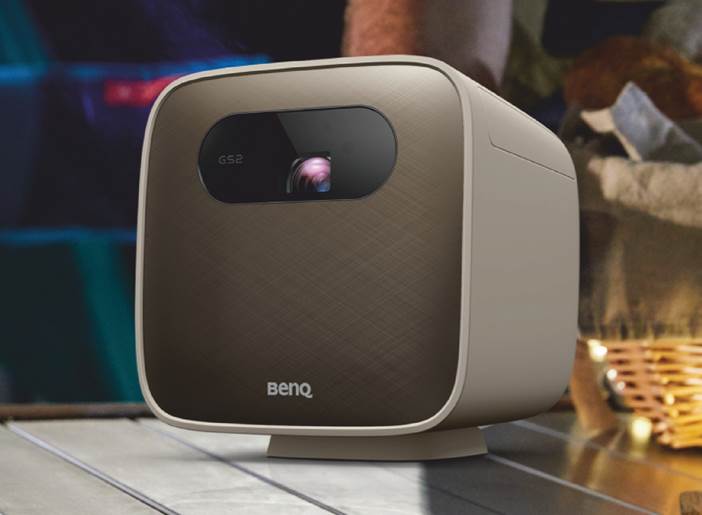 A couple of years ago we spent some time with BenQ’s GS1, a nifty little Wi-Fi and Bluetooth-enabled portable unit with built-in battery, great for a few hours of group entertainment anywhere — projecting onto the side of a tent while camping, perhaps. What could be cooler? Well, the new BenQ GS2, it turns out.

Where the GS1 was (kind-of) a traditional projector in miniature, the GS2 is very different, a near-cube, coloured a gentle tan. Impact protection is built in: the box proclaims that the unit can cope with a half-metre drop (we didn’t try). And it’s IPX2 rated — that’s splash-proof, but don’t leave it out in a storm. It comes with a nicely retro canvas carry bag.

The GS2 can tilt back on its base to guide the direction of the picture, and there’s auto keystone correction to fix the resulting wonky shape. A threaded hole is compatible with camera tripods.

On top are soft control buttons and a harder panel that pulls out to expose the HDMI input, a USB-A slot and USB Type-C socket, plus a 3.5mm analogue audio output for plugging in a speaker. But the GS2 does have two speakers built in, each driven by a 2W amplifier.

Also in that section is a deep bay with a USB socket inside. You plug the included Wi-Fi dongle into that, so that it disappears completely from sight. The dongle supports dual-band Wi-Fi standards up to 802.11ac. The projector also supports Bluetooth for connecting speakers and headphones. There’s an external power pack, but also a built-in battery rated for three hours of operation.

The projection engine uses DLP technology. The digital micromirror device is a small 0.3-inch model offering 1280 pixels across by 720 vertically, while the projection engine supports incoming signals of up to 1080p. So that’s the same resolution as the GS1, but the brightness has been bumped up from 300 lumens to 500 lumens, presumably because of a change in the lamp model.

There is no optical zoom, so you just move the unit to align the image with your projection surface. BenQ clearly considers 100-inch screens about the maximum size — that’s the largest it shows in the table in the manual. To fill such a screen the projector would need to be 2.88 metres away.

Given Wi-Fi, the BenQ GS2 is a smart projector. It runs on Android, with several apps running on it. You can cast from your smart devices, including Apple devices using AirPlay. It supports Miracast. It can connect to your network, which is obviously the way that you’ll use it at home. But it can also act as a Wi-Fi hotspot, so you connect your phone 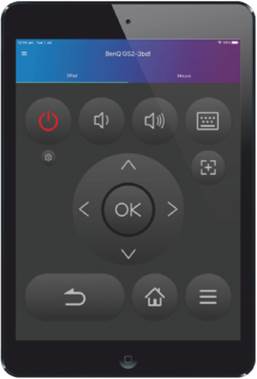 directly to the projector and mirror content, even when away from your home network.

It comes with a slim aluminium remote, but can also be controlled using the BenQ Smart Control app (shown below) on Android or iOS.

We initially puzzled over how to adjust the focus — no knobs, no buttons labelled ‘Focus’. So we just turned on the projector and one of the first things it did was flash up a blue test pattern to adjust its own focus. Clever! The projector also has auto keystone, though to our eye this left the uprights slightly splayed out towards the top. We have an abiding hatred of keystone correction anyway, especially on a 720p display where you don’t want to waste any pixels, so we just switched that off and made sure the projector was properly aligned. If like us you do try the auto keystone then turn it off, go into the manual keystone adjustment afterwards and adjust it back to zero, as any auto keystone adjustment remains in place even after ‘auto’ was switched off.

We just turned on the projector and one of the first things it did was flash up a blue test pattern to adjust its own focus. Clever!

app) to adjust the focus manually. Not that we needed to — when we inspected the screen closely we could see that the individual pixels were properly focused. From a couple of metres away this ‘screen-door’ effect ceased to be visible, and there was also no rainbow effect at all. Nevertheless, with eyes accustomed to Ultra-HD displays these days, 720p display inevitably feels rather soft.

The colours were good, if not as rich as some. Black levels were actually quite good, with the black top and bottom bars on 2.35:1 movies barely distinguishable from the surrounding screen. Brightness uniformity was good, with the dullest part of the picture at 80% of the brightness of the lightest part.

We noted that when running on battery power the picture brightness roughly halved. When plugged in, the image was visible even under room lights. The battery- operated brightness was just a little too dark to be entirely enjoyable, but of course we understand that there’s no point having a bright picture if the battery is going to run out halfway through a regular movie!

It was clear that all content, whatever the frame rate, was converted to 720p/60 for display. That resulted in marked judder with all 50Hz material, and some visible judder with 24p video. And with interlaced 50Hz material, all progressive-scan conversion was based on the assumption that the content was video-sourced, though the resulting deinterlacing artefacts were softened here by the lower resolution of the display. 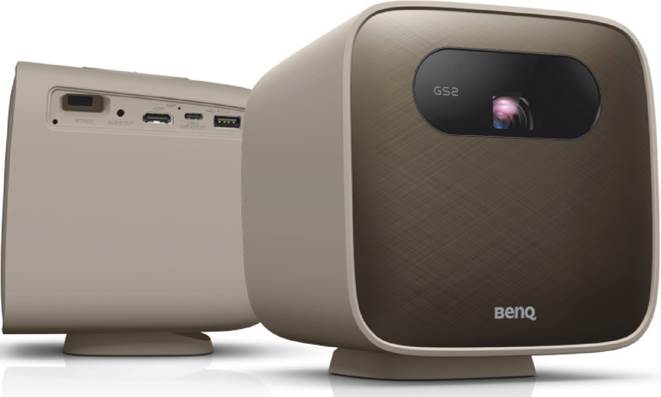 Much of the fun of the BenQ GS2 is its portability and its networking capabilities. The few apps installed by default include Netflix, Prime Video, YouTube, iQIYO (a Chinese-based movie and video streaming service) and Aptoide, that last a store for additional apps, a seemingly limitless number. ABC iView is there, though we couldn’t find SBS On Demand.

When you fire up the projector you are presented with a home screen that sets out all its capabilities. You can arrow around the inputs, the installed apps and a row of settings. If you use the Smart Control app, you can choose to change to a mouse-pad tab and slide an arrow around.

On the home screen, the top line invites you to connect to the BenQ GS2, though it lists the name of the Wi-Fi access point; you actually need to look for the name of the projector. AirPlay did most certainly work when we selected ‘BenQ GS2-3bdf’.

The screen mirroring with an iPhone, an iPad and a Mac was fast and reliable, with the barest minimum of lag. We wouldn’t play reflex-based games this way, but for regular computing it was fine.

It seemed a little fussy about devices: it worked with our Samsung Android tablet, but not with our Huawei P30 Pro phone, or either of our two Windows computers. By ‘would not work’ we mean that those devices simply could not see the BenQ projector, so we couldn’t connect to it. (Both the phone and those Windows computers work with our smart TV.) However it did work with our old Google Pixel 2 phone. That phone does not support Miracast, relying on Google’s Chromecast instead.

Yet we could use the Smart Control app on the Huawei phone, and it controlled the projector perfectly well. Why it couldn’t see the projector as a wireless display? Who knows. The mysteries of Wi-Fi operation.

If you’re after a home cinema experience on a big screen, then of course look for a dedicated home projector offering 1080 or Ultra-HD. (BenQ certainly has several fine models in the genre.) What the BenQ GS2 offers is a fun, versatile and smart display experience in a portable form. As such it’s a great success. 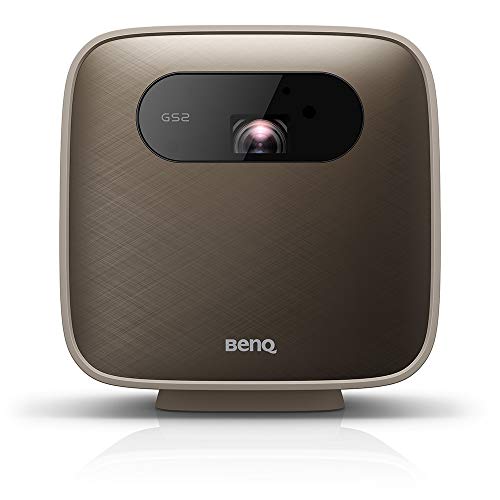