David Price spends some time with a re-imagined iconic standmount that’s anything but a seventies throwback. Read our WHARFEDALE LINTON Review.

Plenty of audiophiles have a fondness for retro design, but many would agree that it’s modern technology and fresh thinking that shapes our world. This is true up to a point, but plenty of hi-fi companies such as JBL and Technics, for example, are re-examining past ideas too. 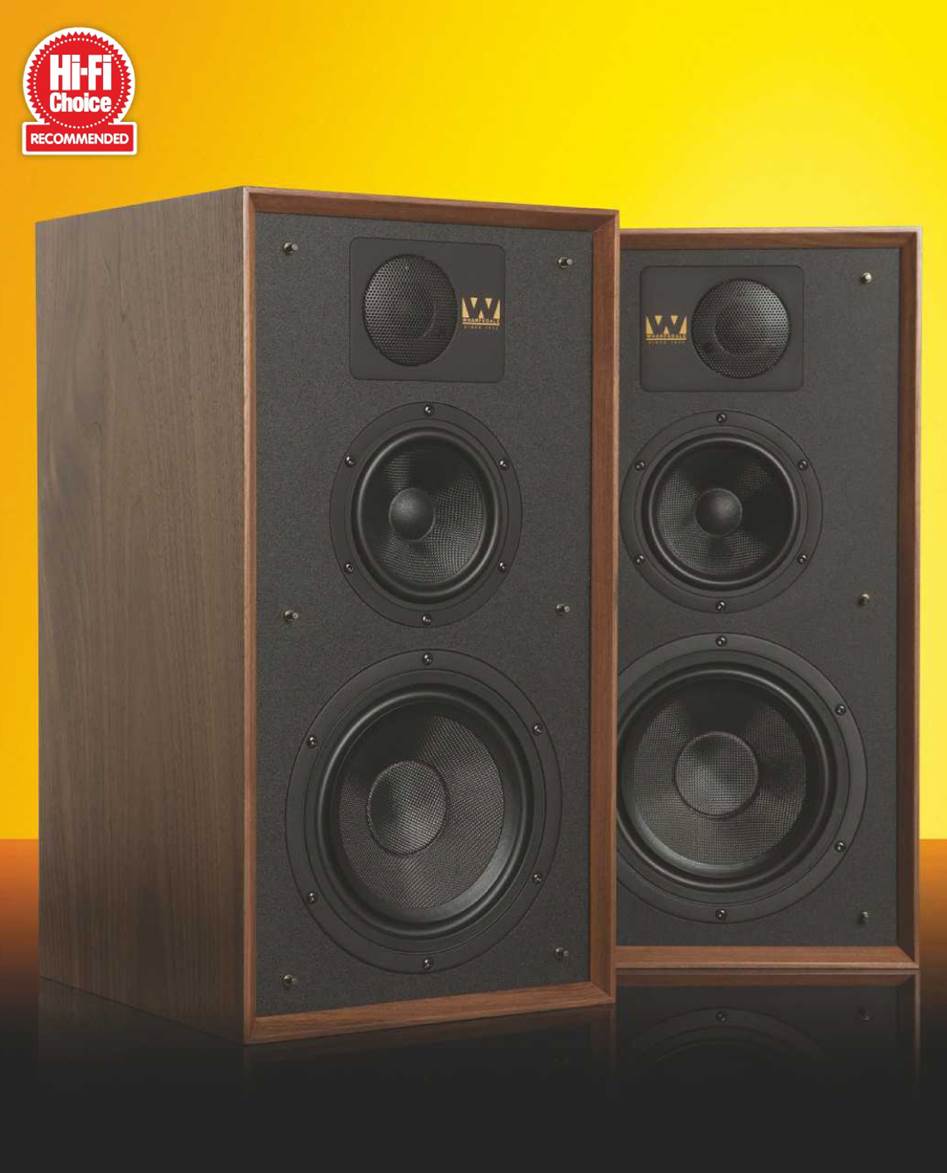 Adding to its Heritage collection – which re-engineers former models using contemporary techniques and materials – Wharfedale’s new Linton does just this; being a large, wide- baffle standmount speaker it’s very much in the mould of big seventies designs, and totally out of fashion compared with the small footprint ‘tower’ floorstanders of today. Yet designer Peter Comeau tells me: “This is not a throwback to days of old, far

A large-scale, gutsy presentation but with decent subtlety and smoothness

from it. This is simply good engineering practice. The broader baffle and larger-than-normal bass and midrange units not only elevate sensitivity, but also are aligned to a baffle step that is lower and broader in frequency than modern, slimline systems.” In other words, by not following fashion he can do the right thing as far as the physics of speaker design are concerned.

Trouble is, the vagaries of marketing are also critical to how modern loudspeakers are designed. Comeau notes that the company’s 85th anniversary has given him the chance to do something more than slightly different. “As we found when we launched the Denton 80th Anniversary (and then Denton 85), there’s a strong customer base for this style of speaker. Retro maybe, but more likely a response to good-quality

furniture appearance allied to the full-bodied sound of speakers designed from the fifties to eighties.”

The name Linton will ring like a bell to audiophiles of a certain age – myself included, as my father had a pair of 3XPs in the seventies. It was the poor man’s high-end loudspeaker; a true three-way with a real wood cabinet and a warm, musical sound. The new one is far larger, however, and instead of paper and polymer for its bass and mid drivers, it uses woven Kevlar in 200mm and 135mm sizes respectively. Also, the old soft-dome tweeter is now a 25mm fabric dome with a metal grille over it. Crossover frequencies are 630Hz and 2.4kHz.

The cabinet is reflex-loaded via twin rear-mounted ports, unlike the original’s infinite baffle design, and this confers dramatically better sensitivity (90dB up from 86dB) and bass extension (35Hz down from 60Hz). “It uses a sandwich of high-density chipboard with MDF skins that scatters panel resonance more effectively than the almost ubiquitous modern use of MDF alone”, he adds. “Finally the crossover has been designed using computer software together with hundreds of hours of listening tests and refinement”.

So big and heavy is this 18.4kg speaker, that it makes the original feel like a toy – and the real walnut or mahogany veneered cabinet is done to a much higher standard than of yore. The grilles are removable, but the speaker sounds better with them in place as they’re specially designed to aid dispersion of the tweeter. Interestingly, the speakers are ‘handed’, and should be positioned with the tweeters inwards. I can’t overstate how much better made everything feels than its ancestor, so the price of per pair is all the more surprising. There’s also an optional pair of dedicated stands (not shown) for per pair, but if you buy both together the total cost is just £. Together they look very good, but I’m not totally convinced by the stands’ wood inserts – which look like a bit of an afterthought.

The problem with nostalgia is that it isn’t what it used to be, as the old gag goes. Yet actually this speaker sounds strangely modern – far more than you would expect by looking at it – while avoiding the pitfalls of both classic and new designs. The Linton sure is quite different to your average modern ‘tower’ loudspeaker, with a sense of physicality and heft to the lower registers that’s really something special. I start off with ELO’s Mr Blue Sky – a classic late-seventies slice of pop – and this speaker belts it out with relish. There’s an uncanny feeling of lots of air moving around the room, yet despite this it still sounds really relaxed, showing tremendous grace under pressure, never breaking into a sweat.

Thanks to this relaxed, insouciant character, the music saunters along happily and everything sounds fun – whatever musical genre you choose.

For example, Rush’s Subdivisions is an ► 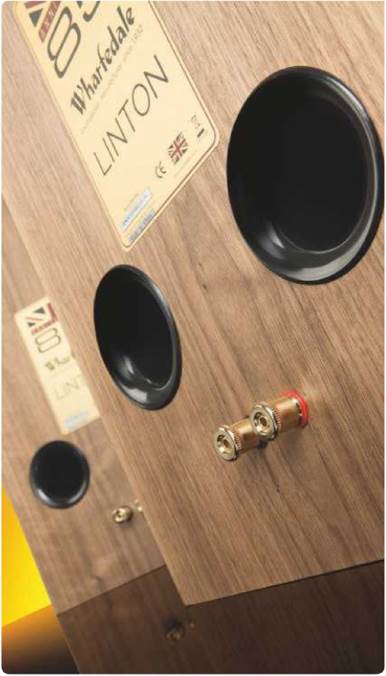 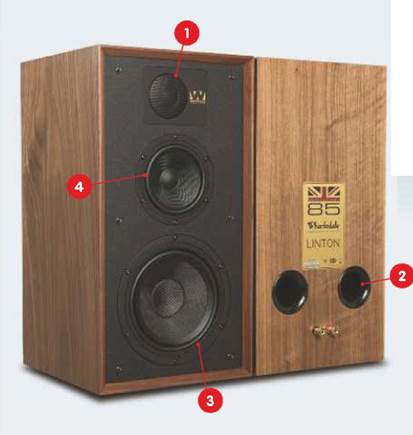 early eighties digital recording that’s both dense and compressed, yet the Linton makes it seriously special. As the song powers along, it separates out the individual elements of the mix with surprising ease. I can enjoy all the musicians playing together really tightly, hearing them coming together to make one cohesive whole. It also seems uncannily easy to peer into the mix, separating elements with aplomb.

Although it gets the thumbs up for its ease, scale and musicality, the

Wharfedale isn’t without criticism. Listen hard and you can hear a slight opacity to its upper ranges – and this is most obvious with shiny, super-clean recordings like Scritti Politti’s Perfect Way. This eighties classic shows up the tweeter’s slight lack of delicacy, although it never sounds coarse. At the same time, it’s clear that the midband softens things out a bit, lending its own – admittedly subtle – sonic fingerprint to the proceedings.

For example, it is unable to resolve the chiming sound of the track’s early digital synthesiser in all its glory, and brings just a touch of nasality to vocals in absolute terms. Given its very modest price, this is not a criticism, but merely a remark. Yet the great thing about the Linton is it covers its tracks so well. Although not the greatest speaker ever made, you never find yourself dwelling on this point. Instead whatever I play, it gets into the musical groove.

Provided that you spend time properly toeing-in the speaker to the best angle for your listening position – and it can be quite a fine balance – you’ll doubtless be impressed by the stereo imaging. It doesn’t quite have the pinpoint precision of some rivals with coaxial tweeter/midrange drivers, but it’s still pretty good and gives the lie to the claim that wide baffle speakers don’t image well. Every recording I play sounds surprisingly large and expansive. Haitink’s superb reading of Vaughan Williams’ Symphony No.2 sounds wonderfully atmospheric with a great sense of the recorded acoustic, for example. Depth perspective is a real standout strength for this speaker, too.

Another pleasing facet of the Linton is its dynamic headroom; it’s able to track musical crescendos really well for a loudspeaker at this price. This, allied to its more than decent timing, makes for a lively, vibrant rendition of anything you care to play through it. Rather like the re-imagined or re-released JBL and Klipsch speakers I’ve also heard recently, it isn’t especially neutral – and nor does it set out to be. Yet it’s undoubtedly unalloyed fun offering up a large- scale, bold and gutsy presentation, but still with a decent amount of subtlety and smoothness. This standmount has excellent table 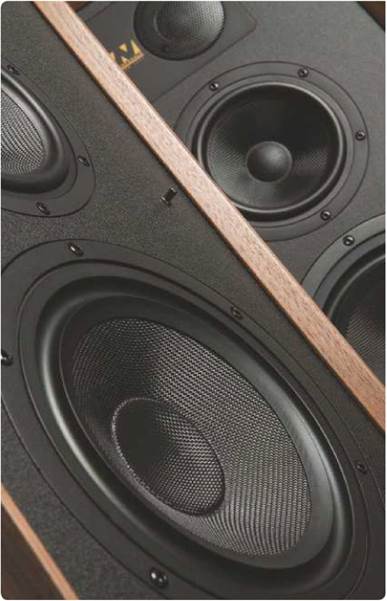 It might look a little retro, but the performance is utterly modern manners, so to speak, yet is never a boring listening companion.

The new Wharfedale Linton re-imagines the past, rather than recreating it. It delivers so much of what was great about old-school wide-baffle loudspeakers – the ease, effortless musicality and room filling physicality – yet consigns the age-old problems of vagueness, dynamic compression and poor transient response to the dustbin of history. It’s a special speaker in its way, but what I most like about it is that it offers all this for such an attractive price

Most standmount loudspeakers at this price are small- scale designs like the Spendor A1. Costing £ it’s wonderfully smooth and open and is more detailed and revealing. But its bass falls off an octave or two higher up and its sensitivity isn’t nearly as good by comparison. It’s a fine small speaker, but it only serves to underline the superb value the new Wharfedale Linton offers.

£79.99
Added to wishlistRemoved from wishlist 0

$174.77
Added to wishlistRemoved from wishlist 0