A contender with a reputation among rivals for pulling magical sonic rabbits from improbably small cabinets. Read our Totem Sky Tower Review.

Although not pictured, each Sky Tower comes with three rocket-shaped ‘hooves’ you have to screw into the base before settling down to listen. From a distance, they’re the only things remotely diverting about the appearance of this painfully plain but not inexpensive little two-way floorstander. In a way, they set the tone, for all is not as it seems.

Stability enhancers? To a degree. Spike receptacles? Not needed or recommended according to Totem, yet each is threaded to accommodate the very same if you feel you really have to. Their primary function is isolation and they’re called Composite Claws. Machined from high-density composite, their shape is said to break up standing waves to control surface resonance, tighten bass and heighten the soundstage as they acoustically decouple the cabinet from the floor.

And it’s not your average cabinet. Uniquely, it benefits from a sparing 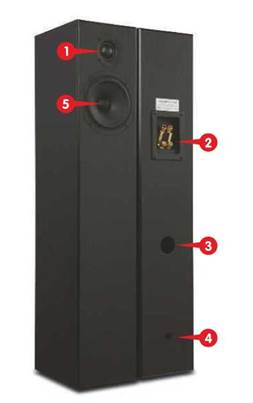 application of Borosilicate damping and the rigidity and air-tight precision afforded it by Totem’s signature artisanal cabinet construction where the joints between panels are made using traditional interlocking mitring for superior fit, strength and seal. The box is light rather than heavy to reduce energy storage, but is claimed to be up to five times stronger than conventional V-Groove cabinets. Internal and external veneering resists warping, while the variable density fibreboard is denser at the extremities than the interior to reduce repetitive nodes and resonances.

What Totem describes as “the world’s only 33mm soft dome tweeter” is claimed to be capable of extending to 30kHz and is joined by a customised 146mm mid/bass driver with a copper-capped voice coil said to be good for 36Hz. Typical Totem.

Things don’t get off to the rosiest of starts – at least not playing at the low to moderate volume levels the other speakers in the group have no qualms with. The Hegel H120 amp I’m using is no powder puff, but I have to push its gain scale a good 10 points – therefore making the Sky Tower noticeably louder in the room than the group norm – before it springs to life. Despite its quoted and entirely reasonable 88dB, it’s an insensitive little box in the field but beyond that it simply needs more poke to perform at even a semblance of its best.

At lowish volumes, it doesn’t seem to want to get out of bed, sounding strangely airless, leaden and dull, though you sense that structurally and tonally everything is in place, somehow waiting to be energised or engaged. And engage it most certainly does when gifted the requisite front-end encouragement. Amazingly, it gives the velvety and, for some, elusive lowest octaves underpinning Boz Scaggs’ song a good go and, though not quite as successful as the larger Amphion, KEF and Triangle, it makes a better fist of it than the Dynaudio and game Spendor.

Like all small Totem speakers, the sheer size and dimensionality of the sound seems to defy logic but does great things for the epic soundscape of Combat Continuum. Just as remarkably, there’s nothing shiny or overtly analytical about the Sky Tower once it’s motoring – nothing obviously ‘hi-fi’. I hesitate to use the word ‘organic’, but there is a flesh-and-blood quality to the presentation that’s incredibly affecting and moreish. It even makes the most ‘digital’ of productions sound human, but add vinyl, Rega Planar 6, Chord Huei, Chet Baker and Bill Evans, and a little bit of heaven enters the room 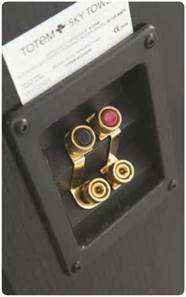 Capable of sonic magic, but not really one for low-level listening