Along with its more voluminous cabinet – taller, wider and deeper than the dainty 607 – comes a larger (165mm) Continuum cone mid/bass driver and the same 25mm tweeter. Behind their Continuum cones, though, the mid/bass drivers aren’t quite the same. The motor system and chassis has been slimmed down and doesn’t have a neodymium magnet. And while the decoupled, double dome aspect of the tweeter is the same, the aluminium dome lacks the 700 Series’ rigidity-enhancing carbon coating or a housing that incorporates heat-sinking behind the dome. That said, the new tweeter uses an upgraded neodymium magnet and wears a new grille mesh from the 700 Series.

The 606 sounds positively huge for its size and, quite a surprise this, more open, airy and expressive through the midrange. The resolution, ambient detail and transparency on offer here frankly beggars belief at the price. This is allied to bass performance that digs half an octave deeper than B&W’s 707 S2 with less apparent effort, if a little more box colouration. The 606 is no less insightful (if a little less subtle), but entertains on a scale and with an enthusiasm the more expensive 707 S2 can’t quite match.

WE SAY: Exceptional sound quality with outstanding midrange and bass, is there a better way to spend £?

Just as with the units in DALI’s five-figure flagship Epicon range, the 130mm mid/bass driver cone of the Spektor 2 uses a mix of low-mass paper with wood fibre reinforcement. The idea is that the embedded wood fibres give the diaphragm’s surface an uneven structure, which is claimed to minimise resonance and improve resolution. The 25mm tweeter is also a recipient of trickle-down tech from the top, featuring an ultra-lightweight weaved fabric soft dome that DALI claims weighs half as much as the market norm. Although it isn’t alone in making its own drivers, DALI is keen to point out it has designed a crossover that doesn’t have to concern itself with frequency correction.

The Spektor 2’s exuberant sense of life and pace is immediately apparent. It isn’t just that it has more treble energy than most at this price, but that it also brings greater clarity and intensity to bear. It bests many rivals for bass power and extension, too. True, it can’t quite match the best for smoothness or poise and balance at very high volume levels, but for most of the time it simply sounds more open, detailed and dynamic than the rest. Its ability to track a rhythm and keep its finger on the pulse of the music is right on the money. For brio and musical involvement it shows the way and is hard to beat.

WE SAY: It might look a little old-school, but its sparkling energy, transparency and sense of fun are anything but… 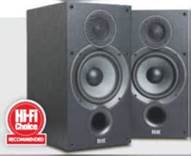 Two years after the game-changing Debut range comes the Debut 2.0, designed by Andrew Jones. The driver lineup is ostensibly as before, with an aramid fibre bass/ midrange driver crossing over to a 25mm cloth dome tweeter. It’s under the skin where things have changed a bit more than first appearances suggest. The new mid/bass driver is the same size and basic material, but the Aramid weave is different and the rear of the cone is coated with damping material. A new convex dust cap is also fitted, which should offer a smoother roll-off at the top end and, thus, lower distortion. In addition, the bass port has moved from the rear to the front, allowing greater placement flexibility.

Initially it is difficult to reconcile the big sonic display and impressive focus coming from these small cabinets. This is not a poorly defined ‘stereo wide’ effect – rather, each instrument occupies its own space and is easy to pick out. The B6.2 does a – possibly class-leading – job of imaging accompanied by a fine sense of detail across the midband, which works wonders on detail and picking out individual instruments’ character.

WE SAY: With well-judged bass, sweet treble and outstanding imagery, this is a thoroughly competent budget option 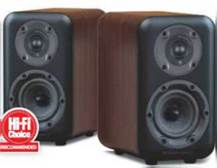 The performance of your loudspeakers can be significantly improved by employing a decent pair of stands. While these speakers are often referred to as ‘bookshelf’, the fact is that they’re unlikely to give their best in such a location and the less said about placement directly on the floor the better. To really give their very best, you need to budget an additional £ for a solid pair of stands that gets the tweeter as close as possible to ear height

when you’re sat down in your favoured listening position. Next, you’ll need to experiment with toe-in and positioning to ensure the very best results. One final tweak that’s worth considering is placing four pea-sized blobs of Blu-tack between the stand and the speaker to couple the two together. This has the added advantage of ensuring that the speaker is less likely to fall off and protects its underside from scratches.

A new version of the S15 standmount we saw in HFC 420, the fundamental spec hasn’t changed and still combines a 25mm soft-dome tweeter with a 133mm mica/polypropylene mid/bass driver. The drivers are integrated by Dynamic Balance Technology, which considers the speaker’s output and works on the relationship of the drivers to achieve the best performance. Also worthy of note is the bass reflex port. This is a rear-mounted cylindrical type, but instead of simply venting out the back there’s an additional plastic surround structure designed to smooth the airflow.

This is an admirably consistent and entertaining speaker to listen to. It powers through music with the sort of drive and determination that is unusual for a small cabinet. Polk’s claim of there being more bass than rivals is debatable, but the bass it does have is well defined, light on its feet and well integrated with the rest of the frequency response. The upper registers blend seamlessly with the bass and it’s here that demonstrable improvements have been made. The presentation has been significantly altered without impinging on the sense of fun that permeates the entire performance. It gains an element of civility that is the difference between it being a model that will delight a specific group of listeners to something that will attract many more admirers.

WE SAY: Extracts greater refinement without sacrificing any of the virtues that made the original S15 so appealing 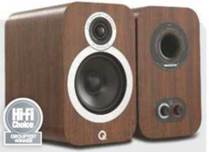 Superseding the 3020 (HFC 426), the 3020i boasts 25 percent extra internal volume, which means better low-frequency performance with enhanced sensitivity and bass extension. The 125mm mid/bass driver uses a cone precision formed from impregnated and coated paper and mated with a newly developed, low-hysteresis, rubber surround – claimed to accelerate without flexing and stop very accurately without unwanted resonances. The 22mm micro-fibre soft-dome tweeter is decoupled from the baffle to isolate it from vibrations from the mid/bass driver and has a wide surround for increased dispersion.

From the off, the 3020i’s smooth, extended treble hasfine inner detail and integrates seamlessly with a midband that is poised, open and articulate, which in turn, melds with the weighty, tuneful bass. Donald Fagen’s The Night Belongs To Mona can sound bloated and ploddy on less-disciplined speakers, and yet the 3020i walks the line perfectly – its bass sounding full and firm with no sign of dissolving into turgidity. But it’s the pure musicality and coherence that stuns – the sheer scale and generosity of the sound and its unerring ability to lay bare the spirit and emotional power of the music. It delivers both strength and subtlety with apparent ease.

WE SAY: Beautifully judged and balanced sound quality, the effortless musicality makes the 3020i a real star

As the larger of two standmounts in Wharfedale’s four-strong range, the D320 borrows a number of parts from the popular Diamond 11 Series – but is intriguingly different in other aspects. The mid/bass driver is a 130mm woven Kevlar design partnered with a long-throw driver system that’s also found on the current Diamond lineup. The 25mm soft-dome tweeter is closely related to the version found in the Diamond 11 and a computer-designed crossover mates the two drivers together. The most interesting departure from usual Wharfedale designs is the position of the bass port on the underside of the cabinet so it remains unaffected by proximity to walls.

Nils Frahm’s Wintermusik reveals a soundstage that extends well beyond the cabinets and a depth and three-dimensionality to the piano that many similarly priced speakers will struggle to match. Tonality is also good. The D320 might not find every last detail in a piece of music, but it delivers voices and instruments in a way that balances richness and refinement with enough treble detail to keep it sounding exciting. The bass response is good rather than great, but the integration between the midrange and lower frequencies is seamless. Music is expertly handled and there’s a little extra sparkle that engages on both an emotional and cerebral level.

WE SAY: A fantastic little standmount that is ideally suited to being the starting point for any budget or second-room system

With the D320s, Wharfedale has produced a fine pair of speakers. Read our Wharfedale D320 Review. Wharfedale's Diamond series has been the bedrock of its product output since introduced in the early 1980s, but the 11th generation, released last ...
8
£190.82 Check Amazon
Read full review

Hailing from its new entry-level 600 Series, B&W's larger stand mount has a high-tech spring in its step. David Vivian is smitten. Read our BOWERS & WILKINS 606 Review. As Oscar Wilde once observed, “...but some of us are looking ...
10
Read full review