In an ideal world you’d want to experience movies with the same speakers used to craft their soundtracks. M&K Sound has been making professional studio monitors for decades, and its S150 is about as iconic as you can get. But what if you fancy a similar level of performance from a speaker that’s a bit cheaper and a bit more… normal looking? 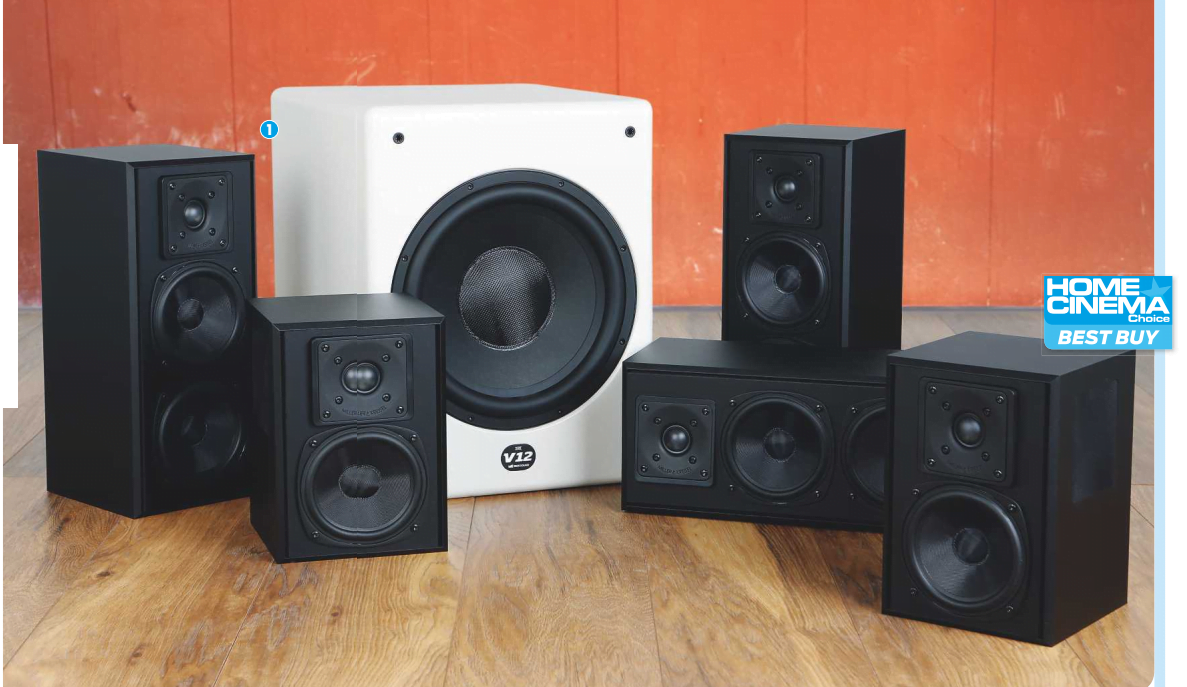 This particular question is no longer hypothetical thanks to M&K Sound’s recently upgraded 750 Series. The range represents an entry-level option within the company’s home cinema audio lineup, integrating innovations and high-performance technologies first introduced in the S150, and presenting them in a speaker with a more conventional driver layout, traditional cabinet design and acceptable ticket price.

Sensibly, the 750 Series employs a similar logic to studio monitors, keeping the left, centre and right speakers identical. Well, almost. The LCR750 is used for left and right channels, while the LCR750C is a dedicated centre speaker. The only difference is the latter is designed to be used horizontally rather than vertically, with an appropriately reorientated grille logo and binding posts.

The speakers each have 1in soft fabric dome tweeters and 5.25in stiffened fibreglass cone woofers, as do the S150s. However, instead of the latter’s funky three- tweeter-plus-two-woofer configuration, you get a more familiar tweeter-at-the-top-and-two-woofers-underneath layout. The HF drivers are given an ‘integrated’ wave guide and shallow horn load to boost dispersion characteristics. Aluminium rings, meanwhile, aim to kill distortion at high SPL levels.

Imaging both on- and off-axis is, says M&K, improved by the speakers’ having a gentle angle to the tweeter installation, which means the left and right units are identified as such on their rear panels. As part of this ‘high frequency prism’ approach, M&K employs tensioned curved metal grilles that fit into slots at the LCR750s’ sides – essentially making them spring loaded (so watch out when removing them).

To complement the front three channels in this 5.1 system is M&K Sound’s more compact SUR55T tripole speaker, which is designed to match the timbre of its siblings while providing a more diffuse surround presence. It uses the same front-mounted tweeter and woofer, but adds two 3in mid-tweeters – one on either side in a dipole orientation – to combine pin-point accuracy with an enveloping soundfield.

The SUR55T also has the same integrated wave guide, aluminium rings and high-frequency prism system, along with a curved metal grille. As with the LCR750 speakers, the left and right units are identified as such.

The original 750 Series was the first speaker to be certified THX Select more than 20 years ago, and these acoustically upgraded versions continue that tradition.

The specs of the speakers are largely uniform in terms of performance, with the LCR750/C delivering a claimed frequency response of 80Hz to 20kHz and a claimed sensitivity of 90dB. The SUR55T has the same frequency response but is slightly less sensitive at 85dB. These numbers aren’t quite as good as the S150 monitors, which drop a little deep and are easier to driver, but they’re very close.

All three models are available in an attractive black vinyl finish, which is fine by me because I’m from the Henry Ford school of colour choices when it comes to home cinema speakers. The build quality is excellent, with pleasingly inert sealed cabinets, and at the rear are high-quality gold-plated binding posts, along with holes in different configurations for various wall-mounting options. In terms of overall style, there’s not much here to >

1. The same 1in tweeter and 5.25in midbass units are shared across the system

get excited about, but you wouldn’t buy these speakers to please your fashionista friends.

The lower frequencies in this setup are provided by the V12, which is the largest of M&K’s compact subwoofers. I actually use a pair of V12s in my own reference system, so it’s a model with which I’m very familiar, and while not quite as burly as the big and beefy X12 [reviewed as part of the IW150 in-wall package, HCC #289], it remains a powerful and responsive boom box.

The V12 carries THX Select 2 certification and uses a 12in forward-firing driver that’s housed in a sealed enclosure. The sub’s grunt is generated by an amplifier capable of delivering 300W RMS, with peaks up to 500W, and the claimed frequency response is a respectable 20Hz to 200Hz. M&K might consider the V12 ‘compact’, but it still weighs in at a hefty 22kg.

Around the back it’s all fairly straightforward in terms of connections, with just a stereo/LFE phono input and stereo phono output. The controls are equally as basic, with knobs for adjusting the volume, crossover and phase settings, along with a switch for selecting off, auto or on.

Our V12 is in its alternate white satin finish, which obviously isn’t a match for the LCR750 and SUR55T models, but would no doubt fit with some of M&K Sound’s other speakers (such as its M Series models.

The V12 isn’t the only member of the M&K lineup to grace my reference system, I also have three S150 speakers at the front, and a pair of S150T surround speakers at the sides. As a result I’m well positioned to compare the 750 Series with the exact same model to which it’s supposed to offer a more cost-effective alternative.

‘There’s an undeniable transparency to the delivery, combined with some simply exceptional detail retrieval’

In testing, the system was controlled by a Lyngdorf MP-60 AV processor, and the speakers driven with an Emotiva XPA-11 power amplifier [reviewed next issue] – so precision and headroom certainly weren’t an issue.

This combination also provided a solid platform for evaluating the neutrality, tonal balance and dynamic range of the speakers.

It was immediately apparent that despite the price differential, the 750 Series has managed to retain everything that’s great about the more professionally- oriented S150 speakers. There’s an undeniable transparency to the delivery, combined with some simply exceptional detail retrieval. The three main speakers produce a highly cohesive front soundstage, although as a purist I’d suggest installing the centre speaker vertically so it precisely matches the left and right speakers, if your setup allows.

The soundtrack of Le Mans ’66 (4K Blu-ray) gives the M&K package a thorough sonic shakedown, with its extensive steering of sound effects from channel to channel as preposterously fast cars screech around the race track. It proves very revealing of the overall tonal balance and cohesion in play here; there’s no obvious shift in the aural signature as cars zoom from speaker to speaker, where less uniform setups might struggle to maintain those purring engines. At the same time, the appropriately named V12 subwoofer meshes well with all five passive speakers, vital as these models can’t compete with towering floorstanders when it comes to bass. Setup with an 80Hz crossover (the THX standard), the V12 picks up where the cabinets leave off – and the don’t roll off a cliff as they reach their lower end – weaving in an undercurrent of low-frequencies to give the turbo-charged engines a deep and throaty roar. 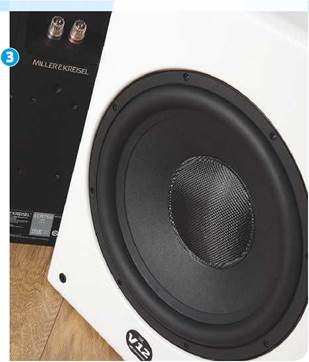 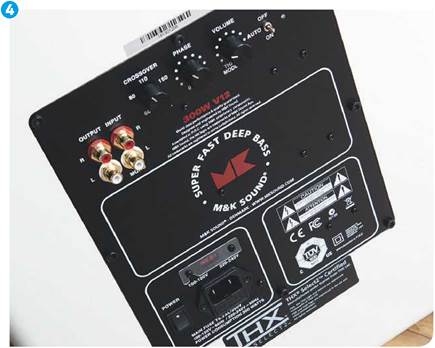 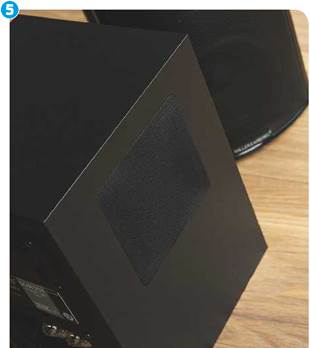 The overall even-handed delivery and precision of these speakers draws out layers of detail within the soundtrack, whether it’s the unique acoustic signature of different engines or the doppler shift of sounds moving towards or away from you. The speakers also reveal the subtle atmospherics of the grease-stained factories, resulting in fantastically evocative soundscapes.

This ability to capture the ambience of a scene is again in evidence with the 1080p Blu-ray platter of Freddie Mercury biopic Bohemian Rhapsody. Queen’s first gig is a smallscale affair, with the band squeezed on to what barely qualifies as a stage. The soundmix enhances these cramped surroundings, from Freddie’s nervous and breathy introduction to the feedback created by the band’s instruments.

There are plenty of succinctly placed audio cues to envelope you, with the SUR55T speakers picking out the chink of beer glasses with a delicious high-frequency hit, and the murmur of the less-than-approving audience. Simultaneously, the tripole design spreads the sounds along my room’s side and rear walls to create a greater sense of immersion. The result is an experience so intimate you can almost smell the beer.

At the other end of the spectrum, the band’s stadium­sized heroics at Live Aid are delivered with all the gusto and epic scale you’d expect, despite the relatively compact nature of these speakers. The LCR channels locate each instrument within the mix, the high-frequency detail is

‘Entry-level is a relative term, but M&K’s 750 Series offers a level of performance that’s in excess of the price tag’

exceptional, and the V12 subwoofer delivers a low end so tight and controlled that you can’t get a credit card between the bass guitar and drums.

Freddie’s vocals are rendered with operatic clarity, and there’s a neutrality to the LCR750’s delivery that simply reproduces the music as it’s meant to be heard, without obvious colouration or excessive warmth. The SUR55Ts ensure the Wembley Stadium crowd spreads out like a sea of humanity, creating waves of voices that lap against the walls of the room. It’s the perfect reminder of just how immersive a good 5.1 mix can be.

Joker (4K Blu-ray) comes across as a sonic experience as disturbing as the film’s title character, with accurate, highly directional audio effects and Hildur Gudnadottir’s plaintive, cello-driven score given the grit and texture it demands. And there’s a playfulness to the mix that again makes good use of the M&K system’s transitional knack. When Joker imagines himself on The Murray Franklin Show and the camera moves around the studio, the house band moves with it, seamlessly passing from speaker to speaker. Dialogue is clear and well-integrated within the wider soundstage. There’s very little action in the film, but the M&K array has the dynamic delivery to handle its unexpected moments of brutal violence.

M&K Sound is to be congratulated for producing a range of speakers that successfully combines the benefits of its S150 studio monitor with an overall package that’s easier on the eye and the bank balance.

The upgraded 750 Series can’t really be called ‘budget’ and entry-level is a very relative term, but there’s no denying these speakers deliver a level of performance that’s in excess of their price tag. The S150s still have the edge, but at less than half the price M&K’s LCR750s give you a lot of acoustic bang for your hard-earned buck

JVC DLA-N5: This is JVC’s most affordable native 4K HDR projector, and it makes that extra resolution count with crisp visuals backed up by a peerless black level.

3. The V12 generates bass energy via a single 12in woofer