Klipsch’s new The Sixes are more than just a loudspeaker – they are a versatile all-in-one system. Jon Myles explains all. Read our KLIPSCH THE SIXES Review. 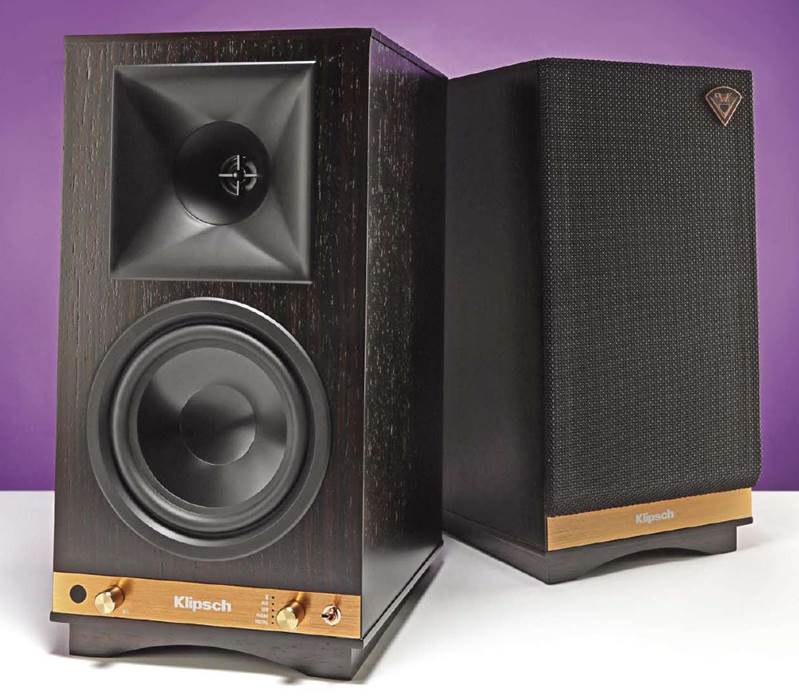 If there’s a big trend in hi-fi at the moment it’s the all-in- one system. Think of Naim’s Mu-So 2 combining streaming services, amplification and loudspeakers. Or – king of the pile – Devialet’s Reactor 900 that gives you a loudspeaker with a 900 Watts per channel amplifier, plus superb design. Now American manufacturer Klipsch has joined the party – but with a twist.

Unbox The Sixes and they look like a typical pair of Klipsch loudspeakers. Pride of place goes to the six-and-a-half inch mid/bass driver allied to a one- inch aluminium tweeter housed in a proprietary horn-loaded enclosure.

The difference, though, is that these £800 speakers include amplification and a complete set of inputs – including a phono stage for a turntable. So forget extra boxes – they can accept a variety of sources and handle everything else themselves.

Volume can be adjusted up and down by the right loudspeaker’s front-baffle rotary control. The amplification for both loudspeakers has been fitted inside the right-hand cabinet. It includes line-level analogue and TOSLINK/USB digital with a 24bit/l92kHz-capable DAC, Bluetooth – plus an MM phonostage. There’s also a subwoofer output for those with a stronger addiction to bass.

To call them wireless would be going a bit far. The main (right-hand loudspeaker) needs to be plugged into a power socket while the pair are connected by a supplied cable. That said, afterwards there’s little to worry about.

The Klipsch’s have 100 Watts of power on board and will accept almost any input.

They also boast a rather attractive mid-1970s retro look with walnut cabinets accentuated by gold logos at the bottom of each loudspeaker. All 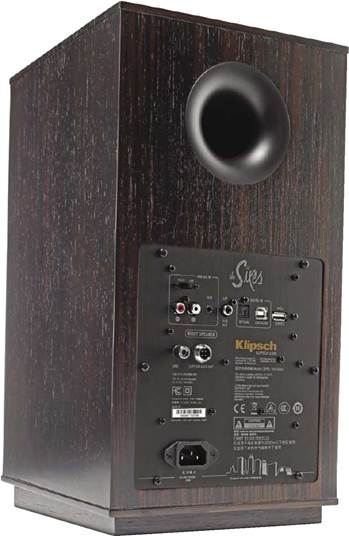 The rear of the main ‘speaker includes digital and analogue inputs – all you need is a source for a complete system. 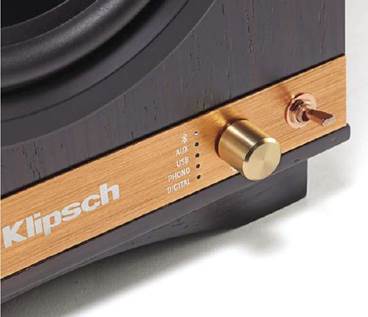 standby mode or choose which input to use.

Alternatively there’s a small remote control that allows you to use everything – including volume, source selection and on/off – from your armchair.

The loudspeakers themselves measure 22cm x 43cm x 28cm and feature a rear-ported enclosure to boost bass response. That means they are not small and do benefit from good, substantial stands to bring out their best – but that holds for any loudspeaker of this size.

On the back are inputs for the integrated phono pre-amp (more of which later), Bluetooth wireless technology, digital optical, analogue RCA as well as USB.

So they are fairly well-equipped and cut down the number of boxes needed to play music. In fact all you need is a source which, at the most basic level, could be an iPhone or Android device equipped with Bluetooth.

The only downside is the exposed screws on the top of the cabinets which, frankly, look a little agricultural.

With a large horn-loaded tweeter and sizable mid/bass driver taking up most of the fascia you’d expect these ‘speakers to be big, bold and brash. But that’s far from the case. Instead they sound accurate and well-balanced, fast and with a good sense of detail.

With New Order’s ‘Bizarre Love Triangle’ via an iPhone on Bluetooth there was a pleasing sense of poise. Bass was deep and taut without being over-dominant while the mid-range sounded smooth. Most impressive, however,

the intricate electronic work stood out, each keyboard stroke ringing crisp and clear. It made the whole track a joy to listen to

was the detail on offer. The intricate electronic work stood out, each keyboard stroke ringing crisp and clear. Put together it made the whole track a joy to listen to.

On Elvis Costello’s version of ‘What’s So Funny ‘Bout Peace Love And Understanding’ his voice stood out – strong and powerful. The guitar work was also brilliantly replayed. Again there was real drive on offer but without sounding coarse or harsh.

Turning the volume up via the right loudspeaker showed the Klipsch’s can happily fill a medium-sized room with ease without collapsing in on themselves.

In fact they stay refined and well-controlled. That Tractrix horn- loaded tweeter also means they sound larger than they look, the sound expanding from each side of the cabinets in a seamless fashion.

With Mahler’s epic No 4 I got excellent separation between the instruments – the violins sounding vibrant and complete air between every element of the orchestra.

The phonostage is also worth a mention. For a sole MM equipped device it sounds remarkably smooth. Yes a standalone device could better it – but that would rather negate the whole point of the Klipschs. They are positioned as an allin-one system which are capable of handling any input you have. Which is something they do very well. The only difficulty here is that the turntable will be close to the loudspeaker, signal leads rarely being more one metre long.

Klipsch have hit a sweetspot with The Sixes. 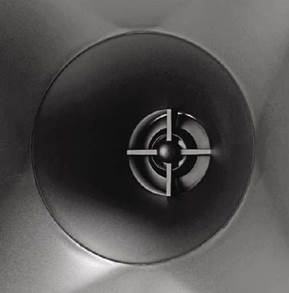 The tweeter sits in a specially-designed waveguide which works well.

Amplification, a DAC and a range of digital and analogue inputs plus a balanced sound make them something of a bargain. Well worth considering if you want a capable all-in-one system that’s easy to use and has trad. design.

Through analogue Phono input set to Aux, frequency response of The Sixes loudspeaker was flat from 50Hz to 16kHz our third-octave analysis of pink noise shows (green trace), measured on-axis. Measuring 20 degrees off-axis there was some small treble loss of a few dB. Overall then, The Sixes are accurate, lacking the treble lift of so many modern designs. In comparison they will sound less bright but are in fact truthful and will be easier to live with in the long term, by not emphasising CD distortion.

Although treble has not been raised, output across the upper mid-band – above 2kHz – is strong from the wide- flare Tractrix tweeter horn, so there will be detail in the sound.

Klipsch have brought up output below 400Hz (ignoring the floor return dip at 180Hz) to ensure a good sense of body but bass rolls off below 50Hz – as expected from a small-ish cabinet with internal volume shared by drive electronics. The port (red trace) is tuned to a high 80Hz, rather than below main driver output as is common, so it supports upper bass rather than low bass. As a result output drops sharply below 40Hz, so no subsonics.

Unusual is the addition of a phono stage. Applying RIAA pre-equalised pink noise The Sixes were perfectly accurate here, as our orange trace shows.

Sending in pink noise from an iPhone file via Bluetooth yielded the same result, so the external inputs maintain accuracy.

The Sixes returned a fine measured performance. They are more accurate than most loudspeakers, which says a lot about the company’s design rationale. 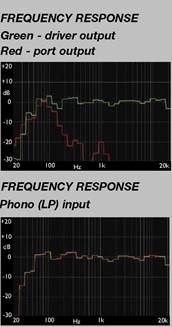 All-in-one loudspeakers that include everything you need to be the heart of a system. Just add sources and it all comes together.