This budget-buy 4K set will appeal by virtue of its well-stocked smarts, tidy design and Dolby Vision support, says Steve May. But does its picture performance stack up? Read our Hisense 55A6GTUK Review. 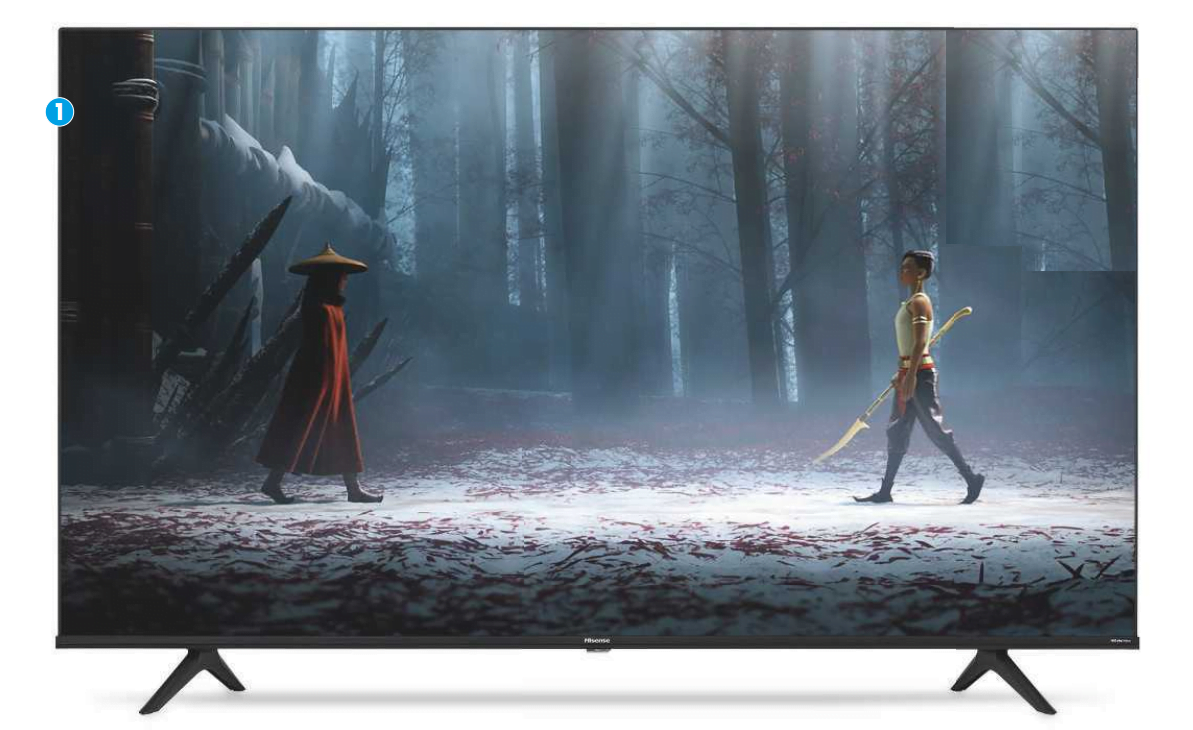 INTRODUCING THE A6G, a new 4K UHD entry-level screen from Hisense for 2021. Aggressively priced and available in a multiplicity of screen sizes (43in, 50in, 55in, 65in and 75in), it’s clearly designed to attract 1080p upgraders, and those of us already in ownership of a main 4K display looking for an affordable largescreen for our kitchens, bedrooms and escape rooms.

Save up to $500 per pair on select bookshelf speakers

Hisense is pushing the technology envelope this year, with mini LED and OLED models both incoming, but this is the brand on high-value home turf.

The A6G offers plenty of curb appeal for the cash. It’s neatly turned out, with Dolby Vision HDR on hand to make the most of apps on the brand’s useful Vidaa 5.0 streaming platform.

The dark-grey bezel is regulation thin, while two plastic feet splay left and right. You’ll need wide AV furniture to match, but it’s a good screen to wall-mount, tipping the scales at a featherweight 11.3kg.

As befits its cheaper status, there are only three (side-facing) HDMI ports. These are billed by Hisense’s specification as v2.1, and offer eARC, ALLM and VRR, but can’t handle 4K/120 playback. Additional connections are a digital optical audio output, a pair of USBs, Ethernet to support Wi-Fi, headphone jack, and old-school composite AV.

The set comes with a slim remote control, festooned with content provider shortcuts: Netflix, Amazon Prime, Rakuten TV, You Tube and Freeview Play are just a button press away.

When it comes to smarts, the A6G is a slick entertainer. Hisense’s Vidaa 5 smart interface may be stripped back when compared to some rivals, but if you just want to binge it’s a good bet. The interface is full-screen, and offers easy access to video-on-demand services.

A quad core processor helps keep navigation sprightly, and there’s a choice of either Google or Alexa smart assistant compatibility for voice control and search.

You get to choose your team during setup.

Freeview Play, which is practically a must-have feature in the competitive budget arena, ensures all the main catch-up services (BBC iPlayer, ITV Hub, My5 and All4) are on tap, accessible via a rollback seven-day programme guide, alongside a warehouse of boxsets. There’s also a satellite tuner, although it’s generic rather than Freesat.

Space Sweepers (Netflix, Dolby Vision) provides a tough challenge for the A6G. It features plenty of deep space, and even deeper shadows onboard the titular spacecraft.

With room lights off, the limitations of this panel quickly become clear. The gloomier recesses of the ship are washed out; panel uniformity is poor. If you shift in your seat, you’ll see the backlight glare dance from left to right. Letterbox movie bars are greyed out.

So far, so good. But, inevitably, there’s a price to be paid for all the pennies saved. For a start, the 55A6G isn’t a wide colour gamut panel, which means it won’t get the best from a 4K disc library. There’s also no local dimming, and the nearest you’ll get to Deep Learning is trying to memorise the menu.

‘Hisense’s A6G isn’t exactly a high performer, but it offers a lot of tech and screen real estate at an agreeable price’

But we’re okay with that. You have to expect some compromise at the shallow end of the pool. The question is, are the compromises too obvious?

The TV employs an AI upscaler able to make more of less. Hisense’s processor does a decent job of upscaling the suspension bridge seen in the background of the opening shot of 10 Cloverfiield Lane (Blu-ray), with no overt jaggies. It did, however, struggle to do much with Blood of the Vampire, a 1958 schlocker broadcast in noisy SD by Talking Pictures TV.

It’s a question of picking your battles.

Picture modes comprise Standard, Cinema Day, Cinema Night, Dynamic, Sports and Custom. Given this budget set’s low average picture level, the Cinema presets are a little too dull for comfort. And while the temptation might be to go to blackout viewing conditions to counter this, that brings other picture foibles. More on that later.

Motion interpolation is covered by Hisense’s 60Hz MEMC (Motion Estimation, Motion Compensation) system. This automatically kicks in when the set’s Sports Mode detects relevant over-air content. Settings are available in Smooth, Standard, Clear, Film and Custom flavours, the latter allowing for manual adjustment of judder and blur reduction. All feel slightly different, but there’s a distinct aroma of soap here, so for movies I’d suggest turning the processing off completely.

Perhaps unsurprisingly, the 55A6G transpires to be more HDR aware than HDR capable. I measured peak brightness at around 300 nits in the TV’s Standard preset, using a 10 per cent white window. This correlates to a lack in tangible intensity with HDR content, even with small details. However, while this may not be the brightest performer in its class, the provision of Dolby Vision helps manage tone-mapping.

Saving the day, however, are rich hues and stunning fine detail. When our dysfunctional crew lands at the UTS Commercial District, this neon city-space-turned-nightclub makes even Blade Runner look staid, despite the absence of any wide colour boost.

And the TV’s contrast limitations are easily forgotten with a good source. When John Boyega goes snooping around a decommissioned Jaeger scrapyard in Pacific Rim: Uprising (4K Blu-ray) the inevitable lack of shadow detail is outweighed by visual gloss and pop.

This isn’t a screen for gamers, though. I measured input lag over 40ms with Game mode selected and a 1080/60 feed. Not a performance that will excite competitive joystick junkies.

The A6G isn’t exactly a high performer, but it offers a lot of technology and screen real estate at an agreeable price. Couple it to a good 4K source, and you’ll be rewarded with sharp, vibrant images. Dolby Vision handling softens the blow of its meagre brightness, and the Vidaa smart platform is well- designed and well-stocked.

That said, this Hisense is getting its elbows out in a crowded market. The likes of Philips, LG, TCL and Toshiba are all prepping similarly tempting ranges, and there’s also competition from the company’s own Quantum Dot A7 range. It’s too early to crown a budget TV champion, but this is a solid early entrant

This good-looking connected Dolby Vision TV is solid value if you keep the lights on and stick with 4K content. It’s not for gamers though.

Add your review  |  Read reviews and comments
Where to buy hisense 55a6gtuk ?

£495.00
in stock
Check Deal
Electricshop
Last Amazon price update was: May 21, 2022 11:19 pm
× Product prices and availability are accurate as of the date/time indicated and are subject to change. Any price and availability information displayed on Amazon.com (Amazon.in, Amazon.co.uk, Amazon.de, etc) at the time of purchase will apply to the purchase of this product.

SPACE SWEEPERS: Floating in Netflix’s orbit since February, this South Korean ‘space Western’ offers plenty of eye-candy, robots and set-piece action, plus well-drawn characters and a fast-paced plot – which is not what you always expect from a straight-to- streaming sci-fi. A sequel has already been announced.