As loudspeaker voice activation technology increasingly favours the big hits and playlists, EdSelley wonders about the future of the album and finding new music

As a reviewer, I try to be as open-minded as possible to technology developments. If my initial response to a product leaves me struggling to understand its purpose. I always try to consider how it came into being in the first place. There are exceptions – I’m looking at you Google Glass – but generally this approach has helped me be broad minded when it comes to technological innovation.

It’s fairly obvious how voice control has come about. My car has a voice-activated phone system, which makes it so much safer to drive that I see it as an essential addition for future purchases. Growing up in the eighties and as a big fan of the TV series Knight Rider, I like the idea of artificial intelligence developing to the point where I can enjoy the sort of easy-going banter with my own car as David Hasselhoff experienced with KITT.

Harman Kardon’s Citation 300 single-chassis speaker represents the first time I’ve lived with a voice-controlled audio product for any length of time and I’ve come out the other side with some enthusiasm for this method of control, but with some concerns about how it will develop, too. While I don’t doubt voice control will quickly get slicker, I wonder whether any improvements will be directed to music playback beyond the basics.

There are some foibles that I mention in the review itself, but the most maddening is that as a fan of Finian Greenall, it is difficult to get the speaker’s Google Assistant voice control tech to understand my request to: “play Fink” – the artist’s performing name. To do so, reveals some form of caveat that makes the software assume I am a member of the EastEnders cast and that I’m actually trying to say “think”.

I’m pretty sure that this sort of nuance will be refined over time, but more of a concern is the way voice recognition systems seem to ignore album playback. As noted in the review, the Citation 300 tends to naturally select a track over an album of the same name and doesn’t ever feel like it’s expected to search for music by album name. This was elegantly demonstrated to me by my five-year-old son who has little interest in the construct of an album but knows what he likes. His instruction “OK Google, play the White Lies” took us on a tour of the band’s output faster than me asking it to play a specific album.

On its own this is more of an irksome detail point than anything else, but on a wider level it points to a more worrying development as there is no way of easily 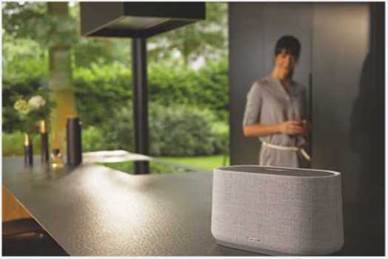 Voice activation has its uses, but its method of music selection is controversial

browsing an artist’s output, for example. You have to know the name of the album and ask for it directly or you get a playlist as the software and streaming service see fit. In a world where the album is already losing ground to the playlist, this looks like another nail in its coffin.

Another worrying development concerns how to use the interface for discovering new music. Ask Google’s Assistant to “play new music”, and you’ll be greeted with an awkward apology followed by silence. On a more basic level, unless there’s some sort of industry plan for this type of speaker to play unwanted ads. I can’t easily see how it could be used to bring new releases to this particular audience. Of course, there will still be umpteen other media channels vying for our attention to ensure new content gets heard, but there is a sense that the future of voice-controlled music involves an endless stream of your favourite tracks like some sort of audio comfort blanket, with limited opportunity for discovering anything new.

As far as I’m concerned, the benefits of employing voice control in my music system are more about substituting spoken commands for hard buttons – being able to say “stop” to either the Naim ND5 XS 2 (HFC 446) or Volumio Primo (HFC 450) network music players would benefit both as they lack any form of physical controls – but it seems that instead of this sort of helpful control, the tech is destined to amplify some music playback bad habits that are controlled by the service providers. I’m interested to see how this develops in future voice control products, but would be intrigued to hear your own thoughts and experiences at here.