Boom! Just seeing that word on the screen is not too startling, by itself. But if someone whacked a bass drum a few feet away from your chair, you’d jump! It’s the same story when you replace the sound from those tiny speakers in your TV with wraparound home theater sound.

George Lucas, the creator of Star Wars and a master of movie excitement, has said, “Sound is 50% of the experience. If you don’t have a good sound system, you cut the experience dramatically.”

The key word here is “experience.” Add realistic sound to whatever’s on the screen (a movie, TV show, video game, concert, or ballgame) and suddenly you’re no longer just watching — you’re experiencing! Two-dimen­sional images become three-dimensional events. TV and movie viewing is transformed into a senses-grabbing cinematic experience, letting you enjoy the sights, sounds, and power of the movie theater in the comfort of your home.

Sound that surrounds you

When stereo was developed, music lovers who had only experienced mono were in heaven. Imagine one muddy channel of sound — the kind you’d find on an old-fashioned transistor radio — being replaced with 2 distinct channels! Suddenly, familiar recordings offered greater clarity and precise detail.

Now imagine the same kind of change taking place when it comes to watching a video. Although a movie soundtrack can be played through your regular stereo speakers, or just through the speakers built into your television, imagine the clarity and precision possible with multiple speakers surrounding you! Just like a movie theater, which uses lots of speakers to engulf you in sound, Dolby® Surround uses sev­eral carefully placed speakers to achieve the same effect — right in your own living room! 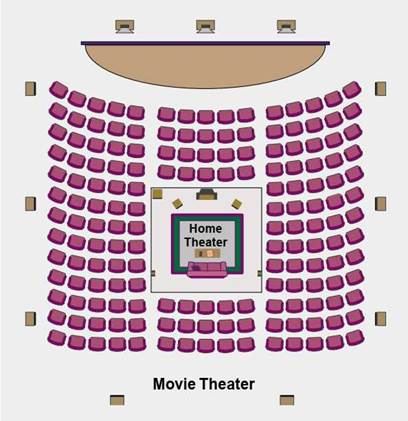 Turn your living room into a movie theater, with surround sound that re-creates the cinema experience!

Whether they’re tiny speakers (called satel­lites) that hide away discreetly on shelves, or large, floor-standing tower speakers, you hear details you never dreamed were there. A multi­channel soundtrack can even convey the impres­sion of movement — so as a horse gallops across the screen, you can hear its hoofbeats begin far to your left, drum closer, seemingly thunder right past you, then slowly fade away in the distance to your right.

Dolby Surround comes in two flavors, Dolby Digital and Dolby Pro Logic, that add excitement and immediacy to every scene. Dolby Digital has rapidly become the standard for great home theater surround sound. What’s more, it’s widely available. You can find the Dolby Digital logo on thousands of DVDs, and it is the chosen audio format for HDTV (see pg. 14 for more information on HDTV). Read on to find out all about why Dolby Digital 5.1-channel sound has taken the world by storm.

Introduced in movie theaters in 1992, Dolby Digital is simply a digital form of encoding audio data, which ensures accurate reproduction of sound. The fact that Dolby Digital is digitally encoded means that it can be stored and sent as a digital signal — and digital signals are not prone to degradation the way analog signals are. As a result, it was chosen as the stan­dard audio format for DVDs and High-Definition Television (HDTV) — a guarantee that it has a future.

5.1- channel surround is a much newer system than Dolby Pro Logic, but it has quickly estab­lished itself as the preferred format. It offers top-notch audio precision and depth, and much clearer dialogue than other surround formats or regular TV listening. As a result, even though it can take the form of stereo, even mono, sound, Dolby Digital is often simply referred to as a “5.1-channel” system.

In 5.1-channel sound, there are five full-range (3-20,000Hz) channels of sound, for impressive depth and precision. Two chan­nels offer full-range stereo sound in left and right front speakers (your regular stereo speakers can fit this bill). A third channel plays through the center channel speaker (usually positioned right above or below the television’s screen, so dialogue seems “attached” to the faces on the screen). The last two full-range, stereo channels of sound are sent to surround speakers, creating a spacious, ambient atmosphere and distinct special effects. 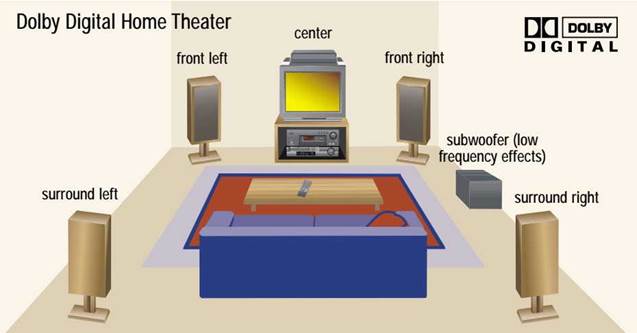 State-of-the-art “5.1-channel” Dolby Digital home theater surrounds you with six discrete channels of crys­tal-clear, dynamic digital audio. With 5.1-channel surround, your main, center and surround speakers are all fed separate full-bandwidth information, for increased three-dimensionality and more precise localization of sounds (it’s important to have surrounds capable of handling all this information). Dolby Digital decoding also sends a channel of “low frequency’ effects,” which adds bass excitement and immediacy to a soundtrack.

The “ 1” (or subwoofer) channel, with a frequency range of 3-120 Hz, contains the additional low bass information (also called low frequency effects, or LFE) needed for the optimum excitement and impact of movie scenes involving explosions, crashes, and other sensational effects. It is referred to as “.1” because 3-120 Hz is a very limited amount of the soundtrack’s frequency range.

Since all six channels are digital, they can be transferred — without loss — from the movie studio to your living room. This advanced home theater technology delivers pristine detail, incredible dynamic range and unparalleled sound localization. It’s a significant improvement on earlier surround formats like Dolby Pro Logic, because the full-frequency stereo surround speakers add more spacious ambience and clearer off-screen effects, while the dedicated subwoofer channel gives realistic bass impact to the faintest rumbles and loudest roars.

In a 5.1-channel Dolby Digital soundtrack, all the sound elements (dialogue, sound effects, and music) are encoded as six discrete channels of digital audio. 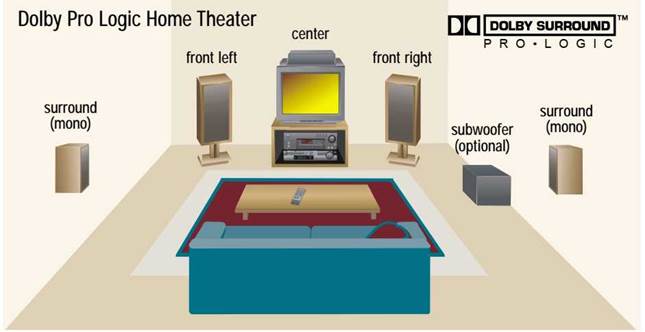 To re-create the realism and impact of the movie theater experience, Dolby Pro Logic home theater places you in the middle of a three-dimensional soundfield. It’s a 4-channel system: (1) center channel for dialogue and on-screen sound; (2&3) front left and right channels for sound that moves with the action; and (4) a mono surround channel for ambience and effects.

components —just be sure, if you’re thinking of adding to your system, that there are compatible inputs and outputs on each component. The digital audio connections you’ll be making will probably use either an optical digital (or Toslink) connection, or a coaxial digital connection. In a few cases, DVD players with built-in Dolby Digital decoding may let you run 6 analog channels (the five full-range channels and one limited channel of 5.1 audio) into a Dolby Digital-ready receiver.

Dolby® Pro Logic™ was the home theater surround sound standard for years, and is still a very common form of Dolby Surround. It’s the decoding format needed when your video source is a Dolby Surround-encoded videotape or stereo TV broadcast.

To make all this happen, the movie sound-track goes through a Dolby Surround encoder, which “squeezes” four channels (left, right, center, and surround) into two matrixed channels. These channels are then stored on a videotape or broadcast in the same (matrixed) stereo format.

Your A/V receiver’s Dolby Digital or Dolby Pro Logic decoder converts the matrixed two-channel signal back into four-channel surround sound. The steering logic circuitry built into the decoder precisely directs sound to the appropriate channel, so each speaker plays the sounds intended for its location.

The rear surround information passes through a time-delay circuit before it reaches the surround speakers, adding a sense of space, and making off-screen sound effects seem distinct and realisti­cally placed. Although this surround information is mono, keep in mind that it’s necessary to use a pair of speakers to achieve the intended surround effect in your home theater. And remember — even if Dolby Pro Logic can’t quite measure up to the precision and intensity of Dolby Digital, it’s still a great way to get surround sound out of a number of home theater sources!

What’s the buzz about DTS?

Digital Theater Systems (DTS) first appeared on the scene in 1993, providing commercial movie theaters with a digital surround sound alternative to Dolby Digital. Nearly 9000 theaters worldwide support this format, and hundreds of movies have been encoded for the cinema in DTS. Now, DVDs with DTS encoding seem to be gaining some momentum.

There are drawbacks to DTS, though. Because DTS uses less compression, it is diffi­cult to fit lots of other features (like multiple viewing options and languages) onto a DVD. Additionally, even though many manufacturers have incorporated DTS decoding into their receivers and decoders, relatively few DTS- encoded DVDs are available — as of May 2000, fewer than 100 could be found. (However, there are many DTS CDs available, offering impres­sive surround sound for music listening.)

Because of the vast amount of Dolby Digital- encoded software already on the market, and the fact that it’s the standard for DVDs and HDTV, we see Dolby Digital as the dominant home surround sound format for the foreseeable future. Remember that most DVD players are DTS -compatible, in that they will send the encoded signal along to a receiver or decoder, but very few can decode DTS. Many people choose to buy a receiver or decoder with both Dolby Digital and DTS decoding, for flexibility no matter what happens. The most important thing to keep in mind is that both Dolby Digital and DTS provide superb digital sound.

$39.95
Added to wishlistRemoved from wishlist 0