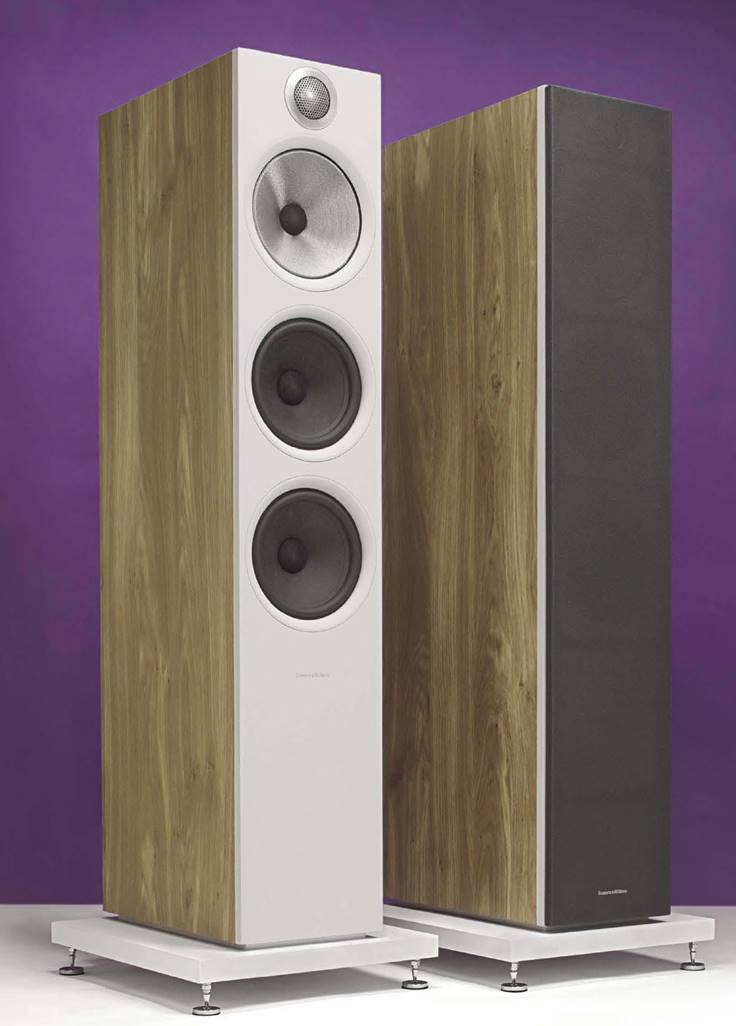 B&W have moved on from using attractive dark yellow Kevlar cones to a new silver-finish synthetic material in a midrange unit they call Continuum. Point being their recent 603 S2 Anniversary floorstander I am reviewing here moves even further into synthetic fibre cone technology for squeaky clean sound devoid of colour – and certainly not yellow. Brace yourself then for what I found to be a very B&W-ish loudspeaker, forthright – but with deep, powerful bass.

And the good bit is a price of £. But for me there was a wrinkle that I cured with a soldering iron and a few resistors, more of which later.

Floorstanders come in standard pattern at 1metre high or thereabouts and the 603 S2s didn’t break convention, measuring 1055mm high on the plinth supplied, 190mm wide (excluding plinth) and 370mm deep including plinth. Weight was high-ish at 24.1kg, making them feel heavy and solid, if not impractically so; I could just about lift them and easily walk them into position. Bringing my attention to the attractive light Oak veneer finish on our samples, with Black and White as alternatives. Spikes are supplied for firm floor standing, but also hemispherical soft feet for those who’d rather not puncture the floorboards, in mimicry of woodworm. A hex key is also provided to bolt the stabilising plinth to the loudspeaker.

What you get here is a bright silvery Continuum synthetic-cone midrange unit that’s large at 150mm (6in), dominating the front baffle. Above it lies a ‘Decoupled Double Dome’ aluminium treble unit, as B&W describe it. They work together via the upper bi-wire terminals, the lower ones feeding two 165mm (6.5in) paper bass units. In single­wire use links on the rear terminal assembly connect the two sections together. Crossover from bass units to the midrange+tweeter was around 600Hz our measurements showed, so the paper bass units handle lower midrange frequencies of this loudspeaker, giving a darker sound than that from the sheeny midrange+treble assembly.

What we have then in the 603 S2 Anniversary is at least one paper­cone bass/lower-midrange unit, a Continuum synthetic cone upper midrange unit and an aluminium dome tweeter – an unusual line-up attempting to blend three different materials. So perhaps expect unusual sound?

Since I’m starting to talk about sound quality whilst describing physical make up, perhaps best to move onto to how they sounded.

Being a modern loudspeaker with no hint of past values, I hooked up the B&Ws to an Audiolab 6000A Play amplifier, through Chord Company Signature Reference loudspeaker cables.

CD and hi-res were fed into the Audiolab’s on-board DAC from our Oppo UDP-205D Universal player acting as CD transport, connected through a QED Quartz glass optical cable for electrical isolation – and it was interesting to hear the sound stage cleaned and composed slightly when I removed the alternative electrical interconnects from Oppo analogue output to Audiolab analogue input. Earth current noise is an issue in high-performance digital systems, giving the curious old TOSLINK optical digital connection useful advantage in electrically isolating player from amplifier to eliminate such noise – why I prefer an optical digital link. The Audiolab 6000A amplifier with its on-board ESS ES9018 DAC gives a fast and intensely detailed sound, one that would match these ‘speakers I felt.

B&W’s Kevlar cones needed long run-in and we similarly ran the 603 S2s for 72 hours to ensure they were on-song. I span a rake of our high dynamic range (uncompressed) review CDs and the overall impression was one of superb insight, with swathes of well lit fine detail. There was an engaging sense of depth to the sound too. Very obvious however was that the tweeter delivered remorseless treble. The effect was to sharpen sound stage images, giving them pin sharp precision to solid effect: every fine cymbal tap in the Pink Panther Theme was thrown out in bright, hard light. But Dadawa’s voice crackled in Canton Story, where it is normally a hushed soft whisper and this just wasn’t right. But I had the grilles off. Measurement had shown the grilles reduce treble by – 1dB or so and putting them on ameliorated these effects; still bright and sheeny balance but acceptable. This is a “modern sounding” loudspeaker shall I say.

Measurement showed that linking the bi-wire terminals with 2 Ohm resistors soldered to 4mm banana plugs, replacing the shorting links supplied, brought the tweeter into correct alignment without affecting the upper mids and this gave a welcome easing of high frequency attack. OK, seems a bit left-field, but a mod like this is easy for a dealer to do, or can be done at home with 2 Ohm – preferably carbon film – resistors. You don’t even need a soldering iron, they can be simply hooked onto the terminals in place of the bi-wire links.

With these resistors in place the 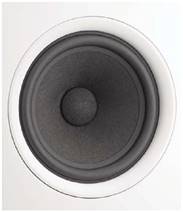 The twin bass units have paper cones and work up to the lower mid-band, around 600Hz.

603 S2s remained crisp and bright, but the tweeter was brought into correct balance. The reason I did this was to more readily appreciate the B&W hard rock sound that underpins their reputation. From the off, with Safri Duo’s Samb Adagio the 603 S2s delivered powerful bass that ran subsonically deep: our room thundered and I could feel the lows hitting me. Better, their bass was tight and rhythmic, not soft and bloated. The intro bass line in John Campbell’s Down In The Hole had fluid power; no one would not like this, I thought. I had some suspicions however.

An optional stabilising plinth is supplied, with spikes and/or soft feet to prevent floor damage.

lower down. There was some box thrum, as is to be expected, but it wasn’t a no-no like excessive treble.

Replacing Elvis with Sinead O’Connor however changed the picture. Opening Bodrans of the Chieftains moved the room in inspiring fashion, at the start of Foggy Dew. There was insight aplenty and a great sense of drama – this is the B&W sound. But Sinead O’Connors vocals had hard tone at times, “to die beneath an Irish sky” moving towards edgy.

At all times the 603 S2s imaged very well, setting up a sharply defined sound stage that ran in rainbow image between the cabinets. This helped toward their drama.

B&W have world-wide reputation for producing a dramatic sound – and this their 603 S2 Anniversary loudspeakers managed. Deep, fast and impactful bass was a big draw. 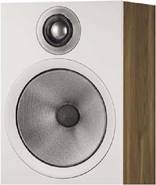 The upper-midrange 150mm Continuum unit works in conjunction with an aluminium tweeter, both fed by the upper bi-wire terminal.

Excessive treble with grilles off was not; they need grilles on or the tweeter brought into line with a 2 Ohm resistor. A very charac­terful loudspeaker then and one that I suspect many would love for its sense of lithe power. But best to listen first in a demo. as it is sparklingly forward.

Frequency response of B&W’s 603 S2 Anniversary is fundamentally flat but there is variation around the tweeter’s 3kHz crossover frequency and upward into its working region. Also, with grille off tweeter output was raised by +4dB at 10kHz – enough to make its contribution conspicuous. With grille on this was usefully reduced by -1dB or so. As the Continuum bass/midrange unit provides strong output up to 3kHz, peaking slightly at 1.5kHz, projection of detail and apparent insight will be strong. So in all, a bright and forward sound with strong detail.

There is no lift in output toward lower frequencies, from the bass units and Continuum midrange unit; the ‘speaker runs flat down to a low 40Hz. This will result in a lack of warmth or body to the sound, giving a dry analytic approach. But the 603 S2 reaches low, its port being tuned to 35Hz our impedance trace shows. Acoustic output from the port is strongest from 35Hz down to a very low 20Hz, giving the potential to produce very deep baas, deeper than most other floor standers of the size.

Bass is traded for sensitivity and at 88dB the 603 S2 is reasonably sensitive, but not up with 90dB rivals. However, 88dB from one nominal Watt is loud, making the 603 S2 suitable for low power amplifiers; 40+ Watts is sufficient. Like most modern loudspeakers it is low impedance,

measuring just 5 Ohms overall with pink noise, in order to draw current. The bass unit measured 4 Ohms. Amplifiers are designed to handle a 4 Ohm load nowadays, so no problem here.

Fitting 2 Ohm resistors in place of the bi-wire links usefully brought down high treble to give a flat response, whilst not affecting output from the Continuum midrange unit, which is part of the high- pass network.

The 603 S2 has strongly raised tweeter output and will sound bright. The Continuum midrange plus bass units run flat but very low, to give a dry sound with deep bass. A good set of results, if ‘distinctive’. NK 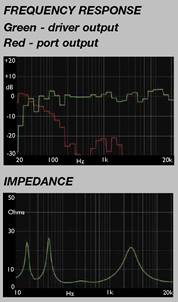