The Formation Bar splits its nine drivers across left, centre and right channels

Take Bowers & Wilkins’ Formation Bar, add a pair of its Formation Flex speakers, plus the Formation Bass subwoofer, and you arrive at a high-end wireless 5.1 system promising both convenience and premium sonics.

While the ticket of this 5.1 ensemble might induce a coronary in the less well-heeled, at least these products boast the kind of design and build quality one associates with the brand. All the components in this system share the same aesthetic DNA, with an emphasis on style.

The Formation Bar is gorgeous to look at, with a sleek cylindrical cabinet that tapers off at either side, a diamond-shaped sub-structure dressed in stretched black fabric, and eye-catching brushed-metal end plates.

Under the hood the Bar continues to impress, with nine custom drivers in a three-channel layout. There’s a dedicated centre speaker for dialogue, and the drivers are positioned to deliver a wider soundstage. Each channel gets a 1in Double Dome tweeter, and a pair of 2.5in woven glass fibre mid/bass units. Six separate 40W digital amplifiers provide power.

The build quality is equally as impressive, and the Bar is wide enough to complement TV sizes of 65in and larger. There’s a choice of stand or wall mounting, but if you choose the former, be aware the Bar is over 10cm high and liable to block many modern screens.

There’s no display of any kind, although due to the Bar’s simplicity that’s less of a handicap than you might imagine. In addition, there are hardly any controls on the unit itself, just power, volume and a Form (setup) button.

But if you’re thinking you’ll just use the remote instead, you’re in for a shock, because B&W has decided not to include one. If your TV has an IR remote the Bar can learn the volume commands, but that’s hardly ideal and didn’t work with my LG C8 OLED.

As a result I used the Formation Home app as a controller, and call me old-fashioned but I don’t appreciate opening my smartphone just to change the volume. I expect many Bars will be installed in systems that use integrated control, but it’s still irritating.

That the Bar perhaps has one eye on the custom install market goes some way towards explaining its physical connections. The single optical digital audio input will probably suit professionals who often shun HDMI to avoid CEC issues, but for a soundbar at this price to lack even a single HDMI port seems bizarre.

The absence of HDMI doesn’t just limit the Bar to not supporting ARC and CEC, it also means it can’t decode lossless audio and immersive formats like Dolby Atmos and DTS:X. But it is capable of decoding 5.1-channel content, which brings us to the Flex and Bass.

The Flex is a two-way wireless speaker that sports a similar design to the Bar, with a black fabric grille, gloss black top and brushed metal base. It uses the same Double Dome tweeter, combined with a 4in woven glass fibre cone mid/bass.

The matching, cylindrical Bass is an active wireless subwoofer, designed to complement any speaker in the Formation Suite by adding low-end grunt down to a claimed 20Hz. This is achieved using an opposed dual driver layout based around a pair of 6.5in woofers and 250W amp stage.

Compared to traditional subs, it’s stripped of features, aside from its support of the Formation mesh network. This is easy to setup, robust, effective, and has no perceivable delay (B&W claims less than a millisecond). I found the app great for initial installation, but the user interface can be confusing.

While you can use aptX HD Bluetooth and Apple AirPlay to stream music, the Formation platform has no UPnP software of its own. To take full advantage of the system’s 24-bit/96kHz high-res audio support, you’ll want to look at Roon music playback software. 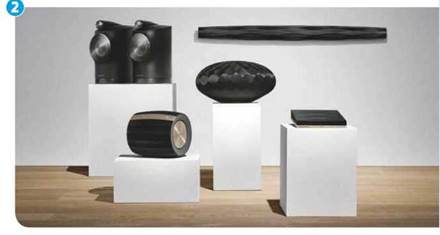 Also in the range are the Wedge and Duo speakers 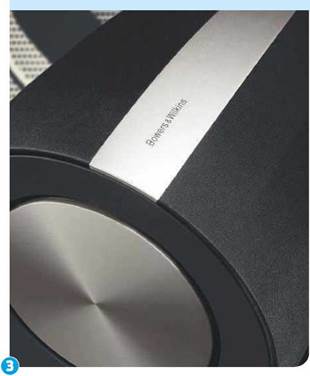 At each end of the Formation Bass sits a 6.5in woofer

As a result of these limitations, this system really needs to deliver in terms of its sonic performance. In this area the Bar doesn’t disappoint, and even on its own this soundbar produces an enjoyably wide, open and musical soundstage.

It’s all about detail and precision, with a beautifully rendered midrange and exceptional high-frequency response. The left and right speakers are wide enough to ensure good stereo separation and excellent imaging, while the digital amplification generates plenty of power and impressive dynamic range.

Listening to high-resolution music via Roon gives this soundbar a chance to reveal its full potential, and Pink Floyd’s The Division Bell sounds wonderful. David Gilmour’s majestic guitar solos sweep out across the room, Richard Wright’s keyboards weave seamlessly throughout and Nick Mason’s drums have a lovely percussive kick.

With TV shows this ‘bar remains equally accomplished, taking its stereo performance and adding a centre channel. Masterchef: The Professionals might not be considered home cinema nirvana, but the score packs clarity and Sean Pertwee’s narration is clear and anchored to the screen.

The same is true with sporting events, the Bar revealing an ability to produce a soundstage wide enough to recreate the most cavernous of stadiums. The noise of a rugby crowd is an enveloping wall of sound, each tackle feels like a train crash, and the commentators are always coherent.

It’s an engrossing 3.0-channel experience, but the lack of any surround presence is evident. The addition of the Flex speakers immediately helps fill the acoustic hole at the rear, and the resulting five-channel system is both easy to setup and remarkably cohesive.

The BBC/HBO co-production of His Dark Materials offers a multichannel mix filled with atmospheric effects that help sell the alternative world of Lyra’s Oxford. From the stuffy university cloisters to the bustling Gyptian barges, the sound design is delivered with all the energy of the series’ young heroine.

The Bar has some pretty good low-end extension, although the claimed response of 40Hz feels optimistic. The Bass subwoofer, on the other hand, is capable of mining some genuinely impressive depths, which is all the more surprising given its bijou size.

With all four devices running in 5.1, you get a commanding multichannel soundstage that retains exceptional tonal balance and remarkable integration. Effects are steered slickly, and the sub delivers bass that is tight and responsive. Aquaman (Blu-ray) comes across as entertainingly full-bodied, its ridiculous amounts of low-frequency energy hitting with the necessary seismic impact. However, reducing what was originally an immersive Atmos mix down to basic Dolby Digital feels like a retrograde step in this era of object-based mayhem.

Overall, this Formation array does an impressive job with 5.1-channel lossy audio, making it sound as good as possible. But at the back of my mind was the thought that a system at this price should offer more. For all of its looks and quality, the Bar in particular feels more like a well- made active speaker than a modern soundbar.

There’s no denying that for the same cost as this setup you could buy an AV receiver and speaker package with support for object-based audio, HDMI connectivity, and integrated hi-res streaming. Such a package would suit home cinema fans and tech-hedz better. B&W’s Formation Suite is clearly aimed at a very specific segment of the market

This wireless 5.1 system sounds fantastic, but with no lossless support, HDMI connections or even a remote, it's hard to recommend at this price.

ROON: An annual subscription fee of $ gets you this clever music playback/ collation software, which sits on your networked PC/Mac and will output your audio files (including hi-res) to the Roon Ready Formation Bar. Also offers EQ/upsampling.