Easily the most eye-catching model of our quartet, but do its images also stand out? 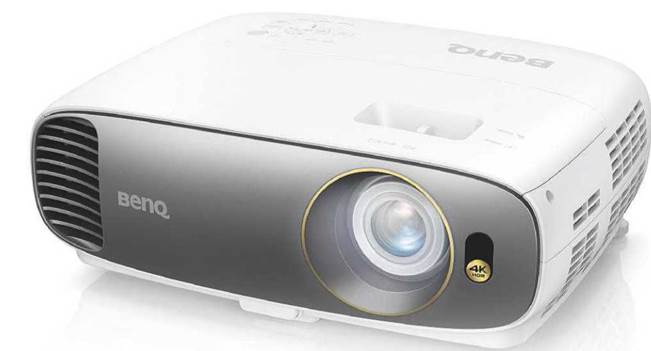 FIRST IMPRESSIONS OF BenQ’s W1700 are strong. The glossy white finish of its top edge and curvy sides contrasts neatly with its grey fascia, while the addition of a yellow stripe around its lens edge makes it look more fun than its rivals.

Yet as with Acer’s V6810, it isn’t exactly overloaded with setup flexibility. Again it only manages 1.2x optical zoom, and there’s no horizontal or vertical image shifting. You’ll either need to physically align the PJ with your screen/wall or use the projector’s automatic keystone feature, which isn’t ideal.

The W1700 has the same connections suite as the Acer V6810, but is unique in this four-way test in offering 3D playback – although, inevitably, we weren’t supplied with any glasses that would have enabled us to check this feature out. Note that 3D resolution here is capped at 1080p24 – the PJ can’t upscale 3D Blu-rays to a 4K pixel count.

The W1700 features a lens with low- dispersion coating to minimise colour errors, and carries an ‘Auto HDR Natural Color Rendition’ engine designed to counter the pushed reds and greens that HDR projectors can suffer with. There’s also processing aimed at retaining greyscale accuracy and colour balance during dark HDR scenes, as well as increasing the punch of the brightest picture areas. So it seems clear that BenQ is taking the W1700’s HDR duties seriously, despite its affordable price tag. This seriousness is mostly backed up by its performance.

Daylight exterior sequences in the Jumanji: Welcome to the Jungle 4K Blu-ray instantly reveal the W1700 to be remarkably bright. Skies look exceptionally bold and vibrant, making them seem more lifelike than they ever could in standard dynamic range mode.

This brightness doesn’t just materialise in Jumanji’s picture peaks, either; there’s also a higher average brightness level throughout the film than you usually get with PJs. This stops the night-time race to the Jaguar statue from looking too dull.

The W1700 also impresses with its sharpness. Close-ups of each ‘game character’ when they first arrive in Jumanji’s jungle world appear detailed and sharp.

Motion is clean and natural during the movie’s Rhino stampede sequence, and colours throughout are surprisingly lush considering the W1700 doesn’t carry any wide colour technologies.

It also suffers less with single-chip DLP’s rainbow effect colour striping issue than I’d have expected from such a bright model, and runs pretty quietly while using the best-quality Smart Eco lamp mode.

The W1700’s colours do lose their usually commendable balance with very aggressively mastered (to 4,000 nits, rather than the usual 1,000 nits) HDR titles such as fantasy flick Pan. Its biggest weakness, though, is its uninspiring contrast performance.

During the Jumanji sequence where Dwayne ‘The Rock’ Johnson races up a torchlit path, for instance, the night skies and dark jungle look distinctly grey rather than black. This issue makes dark scenes feel flat and unconvincing – despite the projector’s processing keeping shadow detailing visible amid the greyness. All-round, however, there’s plenty to admire here.