A stereo amplifier plus tuners plus a whole host of streaming networking functionailty thanks to Yamaha’s MusicCast platform. And one other very important button 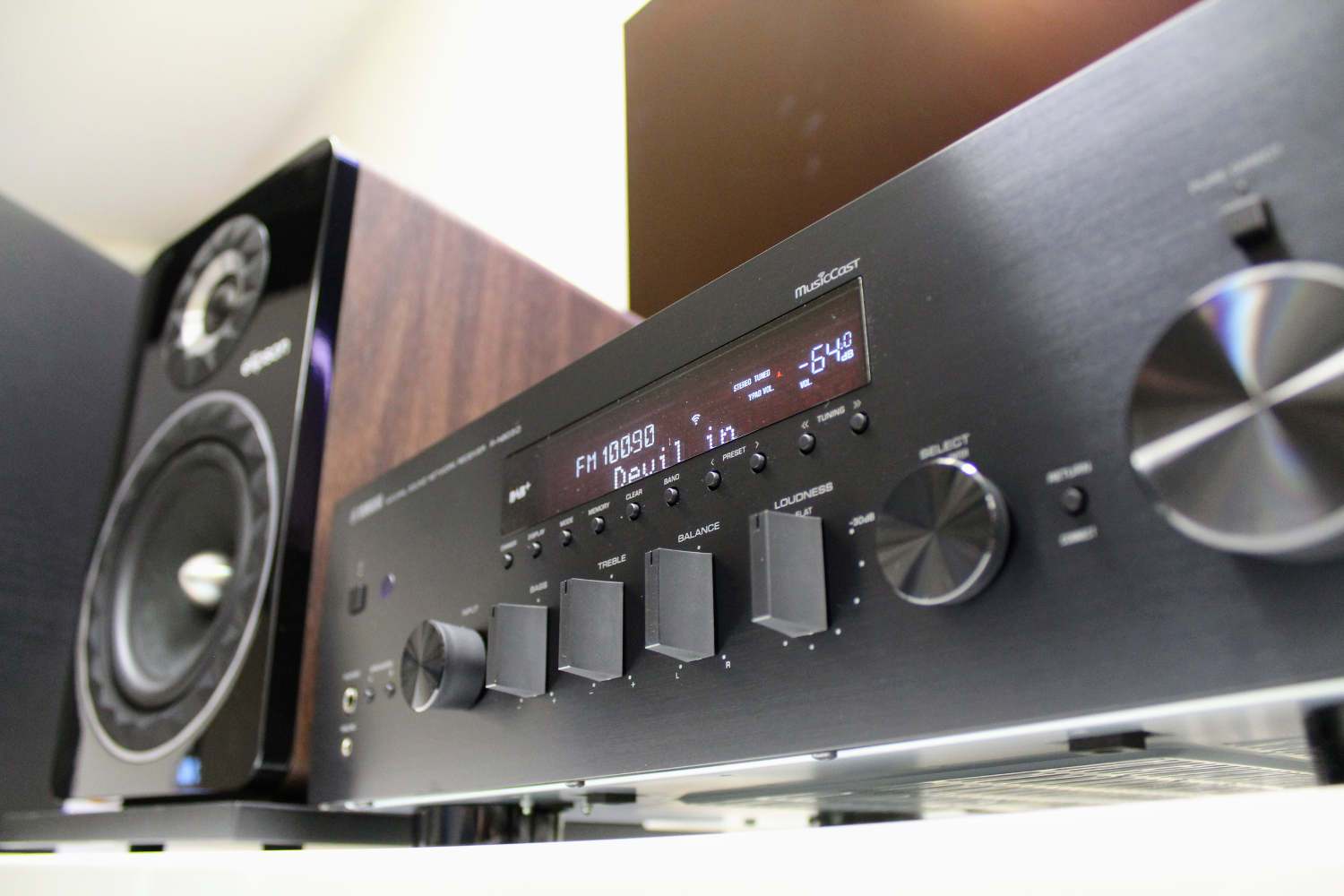 On paper Yamaha’s R-N803 D looks like a do-it-all solution loaded with clever stuff. While it is in essence a stereo amplifier, Yamaha’s description of it as a networked receiver emphasises its inclusion both of traditional radio sources (DAB+ and FM) and of networking plus online playback. MusicCast plays a large part in the latter set of abilities — Yamaha’s multiroom platform includes AirPlay and DLNA network playback, Bluetooth streaming, and app control of playback from internet radio and online music services.

So it’s as much source as amplifier — did we find compromises?

Yamaha makes some solidly hi-fi claims for the amplification — its ToP-ART (Total Purity Audio Reproduction Technology) design concept uses carefully symmetrical and short signal paths, and the chassis boasts a special ‘An Base’ resin frame to absorb vibration. The final output is via four bipolar power transistors per channel.

The DACs too are notable in being ESS Sabre 9006AS chips capable to 192kHz/24-bit for FLAC, WAV and AIFF files via NAS or USB stick, and Apple Lossless to 96kHz.

There are two sets of speaker outputs, A and B, which can be run simultaneously, though as on the lower R-N303 D model Yamaha again includes restrictive impedance limitations when doing so. In normal operation, you’re limited to one set of 8-ohm speakers, nothing lower, and this rises to 16-ohm speakers if you want to drive both together. Given that Yamaha has only 6-ohm speakers on its books, this is clearly a limitation too far. On the N803 D, however, you can change the speaker impedance setting through the front panel menus, allowing four-ohm speakers to be driven, or two sets of 8-ohm speakers.

For source selection you can rotate the left knob through all the available options, but there are a heck of a lot — 20 in all, including, surely unnecessarily, each streaming service in turn (including Pandora, see below), and AirPlay, which is self-selecting anyway, so that’s a bit longwinded.

But the physical remote control has separate buttons for each source, and best of all you can select using the MusicCast app.

Inputs are there plenty: four line-level inputs (the CD input is mysteriously separate to the others), a surprising two of which are blessed with record-out sockets also, a function seemingly dis­appearing on many amps or replaced by pre-outs, which are useless for recording. There’s a phono stage for your turntable, hoorah, plus two optical digital and two coaxial digital inputs. The USB slot on the front will play files from sticks, but not directly from smart devices, though it can charge them while you AirPlay or Bluetooth your tunes across. For radio there are DAB+, FM and AM tuners with two antenna connections; of course there’s internet radio via the MusicCast app. The only obvious omission is there being no USB-B input to play direct from computer.

Packed as it is with abilities, when you unpack the N803 there is some indication of where the money has been saved. The front fascia may be aluminium but the knobs are plastic, and feel it. The binding posts for the speakers on the rear are

lightweight and were soon pulled to slight angles by our heavy-gauge speaker cables, especially the posts we’d left slightly unscrewed after having to prise out their centres to make banana plug connections possible.

Yamaha has made one clever decision in that regard, supplying a plastic but stylish remote, which will after all be your main interaction with the unit. Yamaha tends to put as many buttons on a remote as can possibly fit in the space, so it’s all a bit fiddly, but this one is at least logically organised, with volume controls given a modicum of priority in both size and position.

It updated as soon as powered up and Ethernet networked, and we connected to it using the MusicCast app, and were also impressed later when we opened Yamaha’s AV Controller app by mistake (left over from a previous review) and this other app also spotted the 803 and immediately opened MusicCast for us — nice thoughtful work across the range. More localisation might be friendly — the first streaming option is a big white Pandora square, a service which died in Australia a year ago, and Yamaha’s Australian site has a similarly redundant supplement for Pandora flyer’, which then tells you it is available in the USA only (“this country” it calls the USA).

Otherwise MusicCast supplied its usual fine and easy control over streaming and source selection. Some services, such as Spotify Connect, will pop you out to that separate app; others, like internet radio, can play within the MusicCast app. 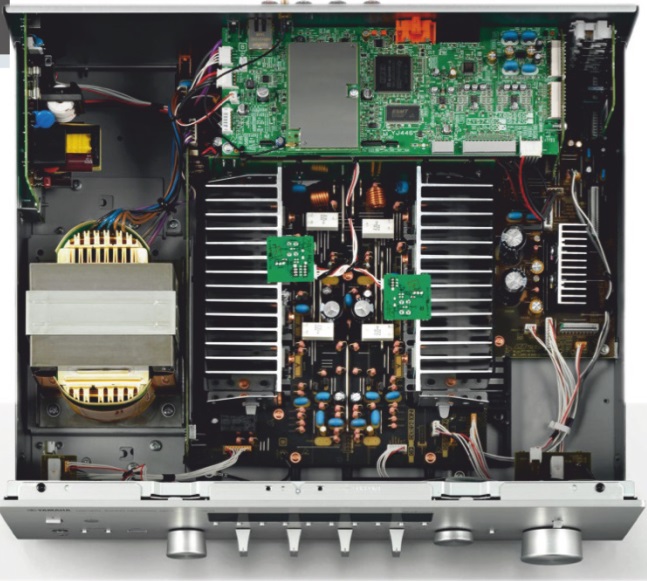 There are some surprising abilities via app, such as being able to select the speaker A/B options, usually a hardware selection. Note the impedance limitations mentioned above, however, and we’d recommend sticking to a single pair at once, of course. Mind you, our main listening speakers were six ohms and usefully sensitive at 91dB/W/m, and even when playing at some pelt, the 803 D didn’t get much beyond tepid in temperature terms. We also found a selector switch for showing audio information — it defaults off, likely to keep the clean look of the app, but we love that stuff! Also new, unless we’ve missed it before, is the ability to save a room preset which includes the source, the volume and even linked rooms, in a similar manner to the ‘scenes’ on the company’s AV receivers. This is a powerful and useful extra, saving significant time if, say, guests arrive unexpectedly and you can kick off party sounds in a preset combination.

Another surprise in a stereo receiver which is not expensive is the inclusion of Yamaha Parametric room Acoustic Optimizer (YPAO) — warning: “Test tones are output at high volume and may surprise or frighten small children.”

We held off on this until we’d done a week of listening au naturelle, but since we’d been fairly uninspired to that point, we plugged in the mike (there is enough cable on this mike to reach a listening position several suburbs away), we sent all the small children away and gave it a go. It was quite quiet really, the tones. It didn’t make much difference, either. We were beginning to wonder quite why our brethren at EISA had given this unit an award, as to be brutally honest, we simply hadn’t enjoyed much music during the previous week, and were finding the Yamaha to be a sur­prisingly unemotive listen.

Then while we were fiddling around on the front panel to see how to defeat the Acoustic Optimizer, we noticed one button we’d missed — Pure Direct. We pressed it. There were some clunks and the display turned off — and the sound changed far more than it had with the Optimizer. The slight thinness to the bass we had disliked was replaced with something more solid; the slight boxiness in the mids opened out. We were enjoying the music again. Paul Simon’s Song About The Moon had our hairs up, a clean, slightly bright presentation of its smoothness which highlighted the side elements of hi-hat left, synth right on the fade-out. How rich the textured opening of the new Dead Can Dance album — the fog horn, the big wide drumscape, the growing ominous synths… here at last was music!

What does Pure Direct remove? It blanks the display. So what! It still flashes up information if you change anything. Pure Direct turns off tone controls, loudness and balance. Good! Does it stop you using MusicCast? No. Spotify? Still works, and even with Spotify the difference was huge.

Huge. Rhiannon by Fleetwood Mac via Spotify went from having a nasty icky cracked snare sound to a properly weighted thwack.

We returned to vinyl; previously we’d not advanced the level much above -10dB from the phono input because of a slightly spitty edge that got uncomfortable at volume. All hail the magic Pure Direct button — edge gone, level up, and we discovered that when you reach 0dB the N803 D goes into positive figures — we couldn’t get to the top with our 91dB speakers but with music paused, we found it goes to +16dB. Woof! We closed off our reviewing with a highly enjoyable nostalgic prog session slamming out a couple of vintage 1970s Styx albums (forgive us our sins). Rich yet tight, they sounded, lively yet controlled.

Our advice: just live with Pure Direct all the time. Tape the button down. It’s a black and white difference. Choose white. And hey, a message to Yamaha — make the Pure Direct button big and red and write “Press this” next to it in 30pt lettering. Do everyone a favour.

One button makes all the difference here. Press Pure Direct and enjoy the sound capabilities, the music of the R-N803 D, as well as its great versatility of inputs and the MusicCast platform. Now we understand the EISA award!

“Just live with ‘Pure Direct’ all the time.

Tape the button down…”

Outputs: Subwoofer out, speakers out, Bluetooth out, control trigger out