There’s no mistaking a Vivid Audio loudspeaker design – but it’s not only their appearance that marks them out. We reckon you could pick them just as easily blindfolded, from their sound quality. Read our VIVID AUDIO Kaya 90 Review. 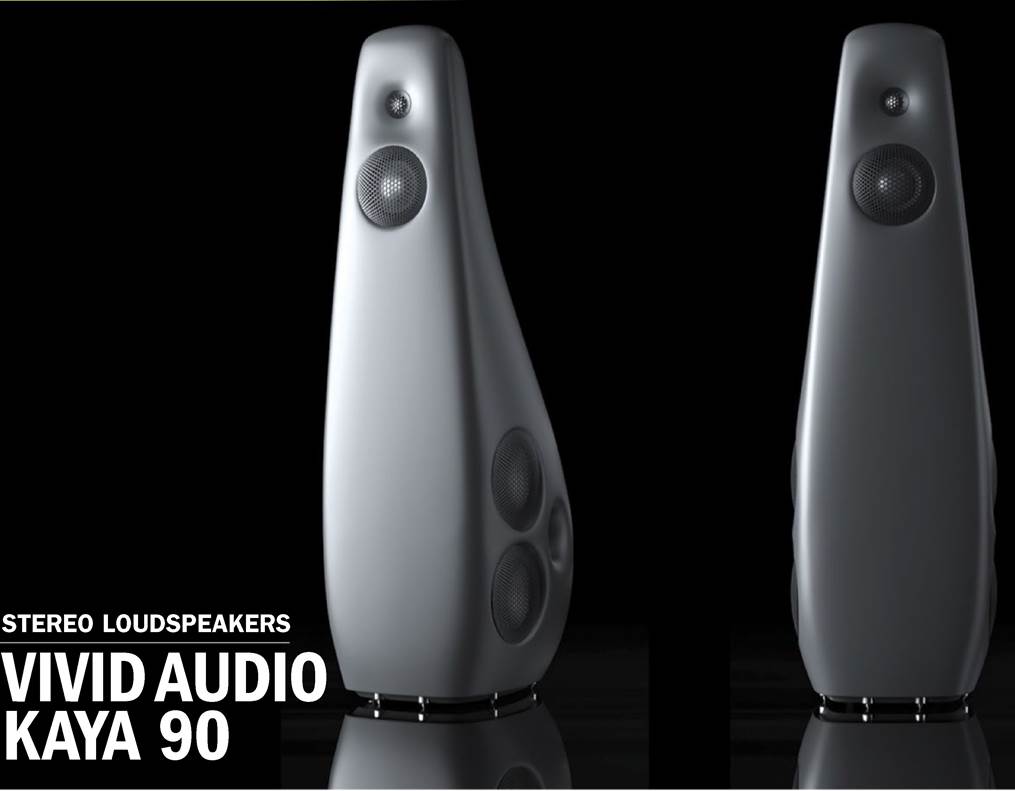 Vivid Audio’s loudspeakers not only look different, they sound different too, something that Vivid Audio’s lead designer Laurence Dickie knows all too well. But since that’s what they said about B&W’s flagship Nautilus — which he also designed — he’s not too concerned.

Putting aside for a moment the industrial design of the unconventional curvy cabinet, the acoustic design of the Vivid Audio Kaya 90 is also unconventional, because it’s a three-way, six-driver bass reflex system using four 125mm-diameter alloy-coned bass drivers, a single 100mm-diameter alloy cone midrange driver and a 26mm alloy dome tweeter. Both the midrange driver and the tweeter are ‘loaded’ at the rear by tapered tubes, and the two bass reflex ports are also loaded by exponentially tapered tubes. The purpose of these tubes is to eliminate destructive resonances and reflections.

The four bass drivers are mounted in pairs on opposite sides of the cabinet. Vivid Audio calls them ‘reaction-cancelling drivers’ but it’s actually the way the drivers are mounted that results in the ‘reaction-cancelling’ effect. The term describes a driver mounting arrangement that not only means the reactive force from the drivers is cancelled but also means that no vibration is transferred to the cabinet from the drivers.

As with all Vivid Audio drivers, the Kaya 90’s 100mm midrange is made in-house by Vivid Audio itself, using radially-polarised neodymium magnets. This makes for an expensive build, but has many advantages, including being able to use a more powerful magnetic material, the ability to focus the magnetic field more intensely in the gap, and the very low levels of magnetic leakage.

The D26 tweeter in the Kaya 90 has a 26mm anodised aluminium dome with a catenary — rather than a hemispherical — dome mounted atop an edge-wound aluminium voice coil that is driven by eight radially polarised neodymium iron boron magnets. The magnetic flux density in the gap that results is so powerful (2.4 teslas) that Vivid Audio had to commission Ferrotec Corp (USA) to create a special formulation specifically for the D26. Catenary domes are more difficult to manufacture than hemispheric domes, but are much stronger.

But let’s get back to the curvy nature of the Kaya 90’s enclosure (and, indeed all Vivid Audio loudspeaker enclosures). There are sound acoustic reasons for building loudspeaker cabinets from curved panels, based on solid research that goes all the way back to Harry F. Olson, who wrote the definitive work on loudspeaker enclosure design. Olson proved that all other things being equal,

the sound from a loudspeaker with curved walls will sound better than if any other cabinet shape is employed. The technical reasons include superior dispersion, reduced diffraction, and the elimination of interference effects. The shape of the cabinet and the location of the speaker terminals here do, however, mean that you’d be best advised to terminate your speaker cables with banana plugs.

The Owners’ Manual for the Kaya 90 states:

“The great clarity delivered by the Vivid Audio approach can be a little disconcerting at first if you have been used to the sound of midrange cone break-up, and the first reaction is that something is missing. Bit by bit you realise that nothing is missing and you are really hearing through to the original recording in a way that you never experienced before… suffice to say that you shouldn’t be too surprised if after owning your speakers for a few weeks, you really get very excited about what you’re hearing. ”

This advice is correct, but it seems to assume you have bought the speakers without first auditioning them! What it means is that you’re going to have to set aside some quite long periods of time in your friendly hi-fi dealer’s listening room, because the sound of the Kaya 90 speakers is so clean and free of distortion that initially it will seem somewhat ‘lean’ across the midrange, and the speakers will also sound a bit ‘light-on’ in the deepest bass. If your bass does turn out to be a bit light-on at home compared to what you experienced in-store, be aware that there’s a positioning issue that affects side-firing bass drivers, because you can fairly easily get standing-wave effects in rooms with parallel walls, especially if the left speaker is the same distance from the left wall as the right speaker from the right, so you should try to avoid symmetry in speaker layout, and preferably toe both speakers in so that the tweeter paths cross just in front of the listening position.

We started our listening sessions with Ed Sheeran… initially his album ‘:’ (Divide) which kicks off with a perfect demonstration of the sheer clarity and distortion-free delivery at which the Kaya 90s truly excel. Eraser has Sheeran rapping over an initially acoustic backing. His voice and the guitars are recorded dry, so you can hear how accurate the sound of the Kaya 90s really is. Then, when the full band kicks in, the electric bass and kick drum bring all eight of the bass drivers in the Kaya 90s into the picture, with a rhythmic drive that will have you tapping your toes in an instant.

But if you think that sounds great, just wait until you hear the Kaya 90s with Sheeran’s hit Shape of You. The staccato sound effects that mirror his staccato rap delivery are delivered with razor-sharp precision by the Kaya 90s and the multi-tracked vocals leap out into the room and hover in mid-air exactly midway between the two speakers. The ultra-low synth bass is perhaps a bit further back in mix than it should be, but it’s there, and it’s solid, tangible and ultra-clean. The phasing effects on New Man make the air in the room waver like a mirage, so you know that the Kaya 90 drivers are perfectly matched. Sheeran’s break-through album ‘+’ (Plus) is also a great demo for the Kaya 90’s capabilities, particularly Grade 8… just listen to the swish of those hi-hats!

You can’t play Ed without playing Taylor Swift, and so it was that her amazing All Too Well from 2012’s ‘Red’ was blasting from the Kaya 90s (well. emanating, they’re a little too polite to ‘blast’). Piano sound is so hard for speakers to do well, but the Kaya 90s make it seem easy.

The clarity of the Kaya 90s’ midrange allows you appreciate how well Swift manipulates her vocal characterisations to emphasise her lyrical content, from sugar-sweet to a bitterly harsh croak.

Although the Kaya 90s’ bass delivery is depthy, extended and perfectly paced, it’s certainly not ‘in- your-face’, partly because there’s only so much bass you can extract from four smallish drivers (whose combined cone area is roughly equivalent to that of a single 305mm bass driver) mounted in a 90-litre cabinet, but also because it seems Dickie has opted for realism in the department of low frequencies, rather than delivering a too-hot bass signature that would sounds impressive during a short session in a demo room, but become wearing once you had to live with it.

Given its pedigree, we were expecting great things from the Kaya’s catenary-domed tapered tweeter, and we weren’t disappointed. The very highest frequencies and their harmonics were etched cleanly, and despite the metallic nature of the catenary dome, the high-frequency sound we heard throughout our auditioning sessions was consistently sweet with no ‘forwardness’ at all in the upper highs.

An important characteristic of the Kaya 90s’ sound is that it remains properly spectrally balanced irrespective of the volume at which you’re playing, particularly at low volume levels where the sound is as ‘lively’ as it is at higher levels, which can’t be said of traditional ‘wooden box’ designs. The Kaya 90s are also very efficient, meaning that for a given amplifier power they’re going to sound noticeably louder than most other loudspeakers.

The sound quality of Vivid Audio’s Kaya 90s is so pure and clean that throughout our listening sessions we had it in the back of our minds that we could almost be listening to a pair of electrostatics. except that the front of our minds informed us that the Kaya 90s are more efficient, more dynamic, and have far superior bass. They are extraordinary loudspeakers… in every sense of that word.

INSIDE: Laurence Dickie’s tapering Nautilus-style tubes are evident in this cutaway image of the Kaya 90, along with the side-firing ‘reaction-cancelling’ bass drivers in the lower section of the curvy cabinet.