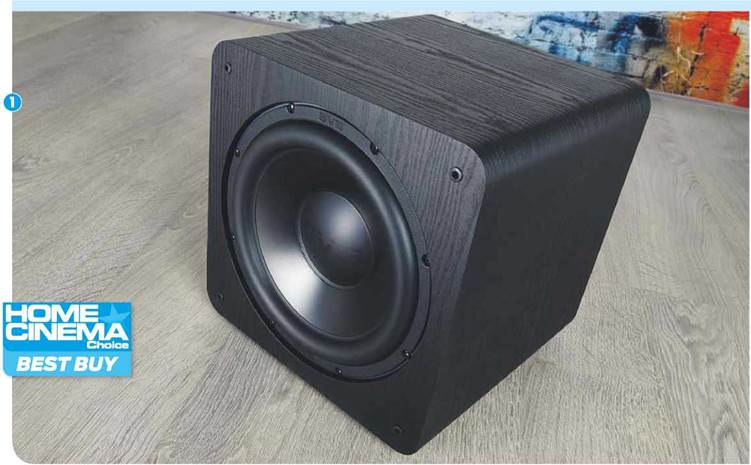 Front-firing sealed subwoofer with 12in driver

THE SVS 2000 Pro is a reimagining of the company’s most popular subwoofer series, integrating features found further up the range to produce a powerful performance at a competitive price.

In keeping with SVS’s usual strategy, the new lineup consists of three models: the ported PB-2000 Pro; the sealed SB-2000 Pro; and the cylindrical PC-2000 Pro. This pragmatic approach provides ample choice, with the ported model delivering low-end grunt for film fans, the sealed unit offering greater agility for those who also favour music, and the cylindrical option providing deeper bass from a limited footprint.

Regardless of which you choose, all three feature new technologies combined with tech filtered down from more expensive models. These include a newly designed 12in woofer, 550W of Sledge digital amplification, and the Intelligent Control Interface. Best of all, the 2000 Pro series now becomes the entry-point for SVS’s remote app.

This Bluetooth-based feature, available for iOS, Android and Amazon devices, provides an intuitive and efective method of controlling your bass bin. It also offers access to preset sound modes, crossover and phase adjustments, room gain compensation, and three-band parametric EQ. All from the comfort of your sofa.

The sealed SB-2000 Pro reviewed here manages to cram its forward-firing 12in driver, digital amplification and electronics into an acoustically inert and compact cabinet that’s only 15 inches cubed, making this sub ideal for those with limited space. It also weighs a sensible 17.5kg, so you can easily move and position it without risking a hernia. You can choose any colour you like, as long as it’s black, with ash or piano gloss finishes.

The front is dominated by the all-new woofer, which sits behind a removable black fabric grille, one of the more obvious differences when compared to the pricier 3000 Series. That’s not necessarily a bad thing though, as the latter’s steel mesh grille is an acquired taste.

The benefits of sealed subs extend beyond smaller footprints, and while not able to hit the absolute depths of ported models, they should deliver bass with greater 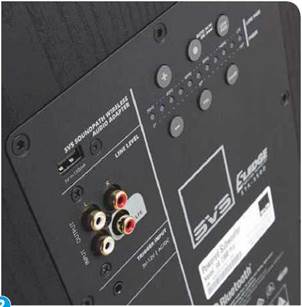 control and precision. And the SB-2000’s claimed frequency response of 19Hz hardly makes it shy and retiring. It should suffice, unless you have a large room, accommodating neighbours, or simply like bass that can kick your teeth in.

The calm before the storm

In essence the SB-2000 Pro is aimed at both film and music fans, allowing it to pull double duty where bass is concerned. In testing this proved to be the case, and using the Music preset it sounded both tight and highly articulate. The second track on Ben Watt’s new album Storm Damage employs a particularly deep bass note that almost catches you unawares. Not the SVS though; it handles the sudden changes with a crisp delivery and lightning-fast reactions.

This agility is demonstrated with Baby Driver (Blu-ray), a film that sports a highly musical soundmix full of eclectic pop songs. The SB-2000 Pro meshes perfectly with the

‘Wonderfully nuanced in its delivery, augmenting the impact of machine-gun fire with perfectly timed hits’

three MK S150 speakers at the front of my room, creating a fluid foundation of bass that underscores the music, adding emphasis where necessary. This is particularly true when it comes to the film’s clever use of gunfire, which is actually timed to the music. The kick of each shot is delivered with scintillating precision, proving the SB-2000 Pro can stop and start on a dime.

I’m all for a refined performance when it comes to subwoofers, but as a movie fan I also like to experience bass in a more primal fashion. So I decided to spin a classic demo sequence, the train crash from J.J. Abrams’ Super 8 (Blu-ray). This scene is justly famous as a low-frequency assault on the senses, and while you might question why a small pick-up truck would cause such a spectacular derailment, there’s no denying the ensuing destruction puts a woofer through its paces.

The rumble of bass gives the train a palpable feeling of weight, and its tumbling freight cars smash into one another with a seismic impact that shakes the ground. As the cars pile up and explode, a tangible low-frequency shockwave invades the room. A ported design might be capable of adding another layer of bass, making the experience more physical, but as containers fly though the air and pummel the ground, the SB-2000 Pro delivers each subsonic slam with exacting control.

Terminator: Dark Fate (4K Blu-ray) boasts the kind of soundtrack you’d expect from a film about unstoppable killer cyborgs, making full use of the entire low-frequency range. The SVS handles the obvious LFE moments with skill, adding full-bodied depth to an exploding drone, or giving two colliding airliners an epic sense of scale. Once again a ported model can probably dig deeper, but in the Movie preset the SB-2000 Pro is unlikely to leave you wanting.

It’s also wonderfully nuanced in its bass delivery, augmenting the impact of heavy machine-gun fire with perfectly timed hits. The same feeling of subtle low-end improvement is evident during a scene where a cybernetically enhanced human clobbers an attacking Terminator with a sledgehammer. There’s a discernible sense of the hammer passing through the liquid metal exterior, before hitting the exoskeleton with a thud.

There are plenty of more afordable subs available, including some ported models that can mine the depths in an unruly fashion. But none are as sophisticated, accomplished or musical as the SB-2000 Pro. It’s a polished performer, capable of delivering deep bass from a compact cabinet, while simultaneously remaining controlled and fleet of foot. Cracking value

This compact performer delivers deep but tightly controlled bass combined with higher-end features, making it a competitively priced option for both film and music.

SUPER 8: It’s now nine years since this Spielberg-produced monster movie debuted on Blu-ray, but the disc remains a must-have. Full HD image quality is exceptional, and the TrueHD 7.1 soundmix is a bass lover’s delight. Time for a 4K remaster, though?

$999.00
Added to wishlistRemoved from wishlist 0