Klipsch’s SPL-150 subwoofer is certainly big, but is it clever? And does that really matter when this bass beast sells for just £? Richard Stevenson investigates. Read our KLIPSCH SPL-150 Review. 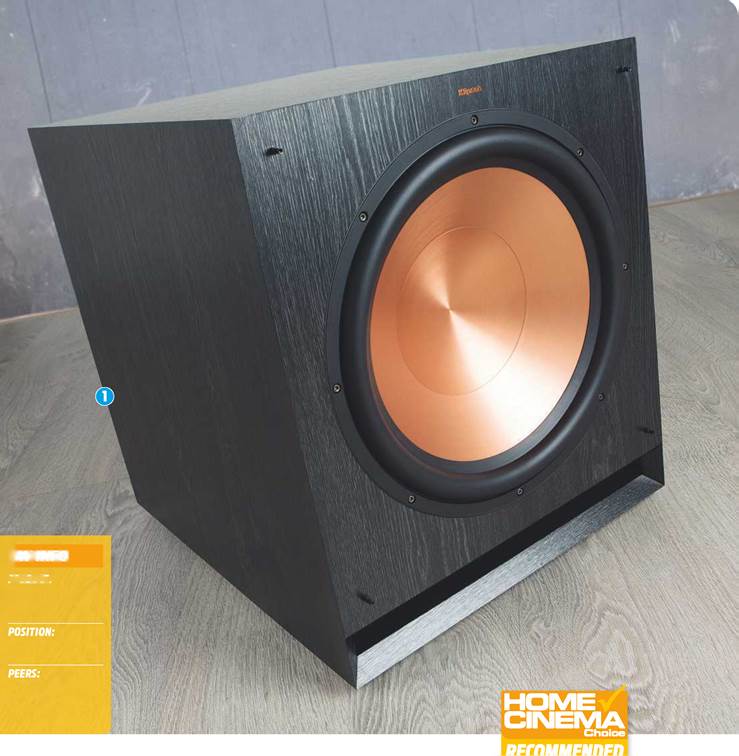 HOLD THE PHONE, is that a 15in subwoofer with a 400W amplifier for less than £? I believe it is, and quickly scrolling to the SPL-150’s entry on Klipsch’s website leaves little room for product positioning ambiguity. Under the heading ‘Badass Bass’, is the statement: ‘We’ve been pissing off your neighbours since 1946 – why stop now?’

I love it already.

In an effort to deliver maximum bass-bang per buck, Klipsch’s SPL series eschews fancy finishes and frivolous features in favour of big drivers, big amps and big, slot- ported boxes. The flagship reviewed here comes in at a whopping half-a-metre or more on every dimension, and its design makes no apologies for its 15in driver by giving it a stand-out copper colour finish. It wants to be seen.

This is Klipsch’s largest ‘Cerametallic’ driver, with a long-throw coil and bulbous rubber roll surround. We’re told the cone is remarkably light but very rigid, with exceptional LF response and very low distortion – but I’m yet to hear a subwoofer driver described in any other way.

While the metallic copper finish is eye-catching, should the look prove too much for your visual sensibilities you can tame it with a supplied grille. The steel mounting posts are on the cabinet and not the grille, and hence stick out if the grille is not fitted, which is a little odd.

The cabinet is a square-edged cube wrapped in ebony black wood-effect vinyl, with a front-facing slot port for bass-loading rather than a traditional tuned tube.

A slot port can reduce the port chuffing associated with a tube, and front-facing ports make a subwoofer easier to place in corners or near a back wall. The reason few subwoofer manufacturers opt for slot porting is that they are trickier to tune to specific frequencies, and the larger opening area can lead to a bit of gung-ho boom and bloom deep down.

Inside, there’s a Class D amplifier rated at 400W RMS and 800W peak. Combined with the high-efficiency driver and voluminous cabinet, the SPL-150 is said to hit 122dB.

Back panel controls, handily positioned near the top, are knobs for gain and variable low-pass, and switches for 0/180-degree phase and on/off/auto power. Connections are just line-level inputs and a DIN-port for the optional Klipsch WA-2 wireless kit, which will set you back £.

Loop throughs, balanced connections, EQ systems or even a remote control are conspicuous by their absence, although many other sub-£ woofers (and more expensive ones) don’t offer these either.

Positioning the SPL-150 is not the charade it could have been. Its relatively bijou 34kg makes it fairly easy to move around, and the rubber isolating feet soak up small flooring imperfections to stop it wobbling. The front port gives you a lot of confidence in backing it up to a wall too, making it a versatile woofer in terms of where you can put it.

Klipsch recommends corner placement to make use of the added boundary gain, and for the ultimate in-room LFE compression suggests one SPL-150 in each corner, run simultaneously through four WA-2 wireless kits. That would leave you lighter to the tune of around £ and very probably deaf by Christmas. I like the idea though.

Getting the LFE level right was equally straightforward after I abandoned using the rather coarse onboard low-pass filter. With bass management duties assigned to my AVR and the level knob set mid-way, the SPL-150 was ready to rock. ‘For god sake, strap yourselves in!’ I mused when

I slipped the Blu-ray of Flash Gordon into the deck for some high-camp, low-frequency fun.

My death-grip on the sofa arms, anticipating an uncontrolled assault of woolly LFE, transpired to be misplaced. Dialled in to the rest of the system, the SPL-150 neatly underpinned the thumping Queen soundtrack and did nothing to slow the infectious rhythm of Football Fight. While Klipsch’s SPL models are never going to bag awards for being neutral and understated, I was pleasantly surprised how well this flagship sub rocked along to the film’s aged score without turning it into a boom-a-thon.

Nudging up the volume, the Hawkman vs Ajax scene is a pure smile-fest, combining ridiculous sound effects, spectacular visuals and Bryan May wringing every last note out of his guitar. Brian Blessed’s dialogue benefits from the sub’s weight. The Klipsch keeps the pace well, backs up the fire-fight and does a reasonable job of turning the kitsch explosion of the Ajax into an almost modern LFE triumph.

For something altogether more high brow than Ming the Merciless’s high brows, 2004’s House of Flying Daggers continued the colourful cult movie theme. Thrown pebbles and drums – you know the scene – had the SPL-150’s copper cone in a visible state of flux, reaching a fair way into its throw range with the volume cranked right up.

There was no shortage of room-filling output, but the initial drum attack did lack the visceral feel of faster subwoofers and there was some smearing of the drum’s overall tone.

The SPL-150 is a fabulous concept in delivering big subwoofer bass at levels your mother would disapprove of, and for a relatively affordable outlay. Its lightweight cabinet is perhaps its weakest link, adding its own take on the overall sound, so it’s not a sub for those in search of razor-sharp edges to LFE transients. But it’s cracking value for money nonetheless, and lots of fun

KLIPSCH R-620F: Sporting the same copper/black aesthetic as the SPL-150, this Tractrix tweeter floorstander is a great starting point when building a multichannel Klipsch system. Easy to drive, with a thrillingly powerful and dynamic delivery.

The SPL-150 delivers on its 'badass bass' promise. Impressive LFE depth and energy for the price, but subtlety and speed aren't strong points.

See deal
Audio Visual Online
Last Amazon price update was: October 25, 2021 4:39 am
× Product prices and availability are accurate as of the date/time indicated and are subject to change. Any price and availability information displayed on Amazon.com (Amazon.in, Amazon.co.uk, Amazon.de, etc) at the time of purchase will apply to the purchase of this product.
MORE