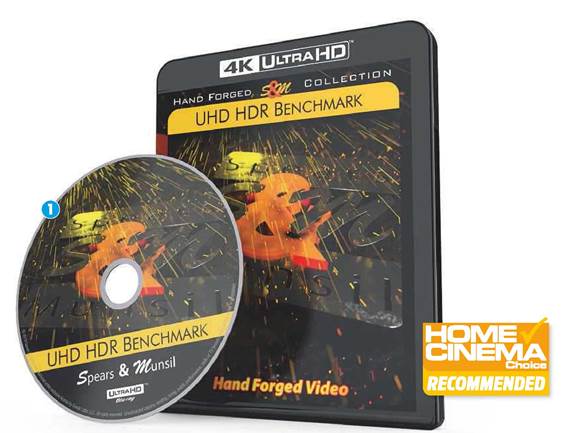 AV tweaking served up on a platter

Spears & Munsil is back with a new system evaluation disc that aims to leave no 4K HDR stone unturned. Jon Thompson sings its praises

DO YOU WANT to break your home cinema setup?

Push it to the limit and see where it technically falls over? Or, rather, just know how good your system is? Then this disc is for you.

If you are serious about your AV, you will have probably heard of Spears & Munsil, the company from pixel wizards Stacey Spears and Don Munsil. And you might already own its previous High-Definition Benchmark Blu-ray, produced ten years ago, or even the DVD before that.

UHD HDR Benchmark, released this year, is a similar proposition, but for the 4K HDR era. The first thing that was made very clear to me is that it’s not a ‘test’ disc; it’s an evaluation disc.

Existing Spears & Munsil disc owners will be very familiar with the layout here. There are setup patterns, evaluation patterns/charts, and montages of footage for further evaluation, all chosen to spotlight issues and failings in your playback system.

The idea is that you fine-tune your display with the patterns to minimise problems in playback. A step-by-step approach is encouraged, beginning with basic setup (brightness, contrast, overscan, sharpness, etc, in the Video Setup menu), and moving through more advanced features and processing tests.

UHD HDR Benchmark sells for £. Seeing as a full Tektronix HDR test and evaluation system would cost you over £, it’s a small price to pay for a taste of how to assess playback, processors and displays. A lot of the tests are intended for subjective evaluation; others do require a colour probe and dedicated software to get the most from them.

One thing this release doesn’t come with is a blue filter for setting colour saturation, as, I’m told, this simple and effective method (devised by the BBC in the 1970s) doesn’t work efficiently with OLED TVs. If you don’t have the original Spears & Munsil Benchmark disc which came with a blue filter, you can still purchase one online. Alternatively, your TV may feature its own blue-only colour filter mode.

To my knowledge, other than a few internal test discs this is the only platter that has HDR10, HDR10+, Dolby Vision and Hybrid Log Gamma (HLG) versions of all its demo material. For pixel geeks, this is a delight, as it is possible to see how the different High Dynamic Range formats affect the output of an image.

The evaluation footage itself is also fantastic, and possibly the highest bitrate encoded material seen so far, often peaking at over 110Mbps. It’s been shot on RED 8K and 5K digital cameras, the same hardware now being used in mainstream productions such as the Richard Curtis flick Yesterday. It’s about the highest-quality footage you can shoot digitally.

The charts and patterns here are too many to go into in detail, suffice to say there are tools anyone should be able to use to improve the accuracy of their display’s image beyond that offered by preset modes – even without a colourimeter.

‘This could be the best £ you ever spend on your setup, and ultimately will make movie-watching more fun’

For instance, one highlight is the sharpness control test – it is remarkable how many TVs out of the box have sharpness cranked up too high. I’ve found having a magnifying glass helps here. Observe the diagonal line, and adjust your set’s sharpness control until it looks as sharp as possible, increasing it only until it’s still a clean line, without pixelation or ghosting above and below that indicates it’s set too high. If it looks at all blurred, the sharpness setting is doing the opposite, and you need to increase it.

Another feature of the disc that should be investigated mandatorily are its sync tests (including one designed specifically for the SyncOne2 accessory I looked at in HCC #272). Many systems’ audio and video are actually out of sync (firmware updates come along like buses and it’s not uncommon for one to break the sync), not by much but by enough that if you fix it, the whole presentation just seems tighter. Thankfully, most AV processors will allow you to adjust sync, and the aforementioned SyncOne2 gives you the amount it is out by in milliseconds. So take the time to test, and correct if possible. You’ll find your action films now look, sound and feel more dynamic as the punches and explosions perfectly match the visuals.

When the disc is interested you have a choice of brightness – options are 600, 1,000, 2,000, 4,000 and 10,000 nits, with 1,000 the default. This allows you to check the tone mapping potential of your system, because while it’s possible your TV is able to show 1,000 nits native with no correction, a lot still can’t and have to remap the image into their brightness range. Using the nit brightness chart, you can see if your TV is clipping any highlights. With, for example, the 1,000 nit output, if the top few white bars all look the same, you know it’s not tone mapping accurately.

This disc’s Video Setup section and demo content is enough to make UHD HDR Benchmark easy to recommend to even AV novices, while the additional advanced tools are suited to calibrators and tech-heads. Use it to fine-tune 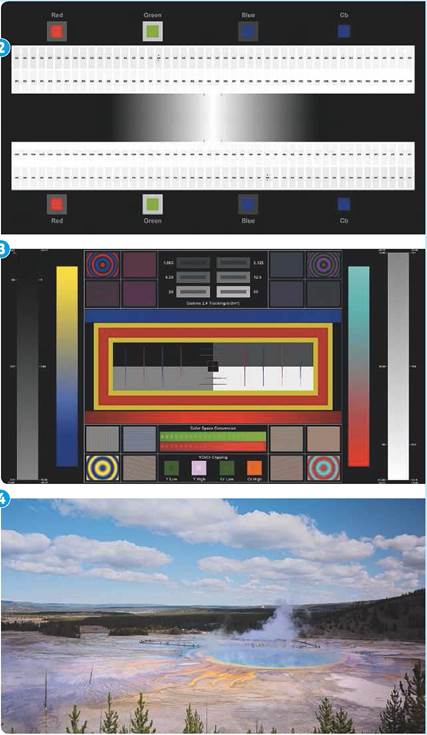 what you can (Spears & Munsil’s website is useful here as it offers plenty of information about what each pattern/test entails), and use the montage clips to ascertain the improvements you’ve made.

This could be the best £ you ever spend on your setup. Ultimately it will make movie-watching more fun, as you won’t be at the mercy of out-of-the-box settings that often harm a director’s intent. Yes, you can calibrate by eye or ear, but having a reference will always help

2. Spears & Munsil’s contrast pattern should be one of your first ports of call

3. The colour space evaluation chart is designed to show colour clipping/range and errors in 4:2:0 to 4:4:4 conversion

This is easily worth the money, even if it's likely you'll never make use of everything it has to offer. It's flexible, educational and will improve your AV.