Able to cast a big image in a relatively small room, positioned just centimetres from a white wall, it’s not difficult to see the appeal of an ultra-short-throw (UST) projector. Read our OPTOMA UHZ65UST Review.

There’s no fear of walking in front of the beam either, causing oversized shadows on the action. The downside is that almost all UST projectors look like escapees from the office Christmas party.

The Optoma UHZ65UST is very different. Here’s a compact beamer that even non-techies might covet.

With its brass feet and fabric frontage, it’s a remarkably handsome beast.

As tends to be the norm with these things, there’s a sound system built-in. But, again, here there’s real consumer sensibility about its design. Wearing the NuForce branding of Optoma’s audio division, this PJ’s sound engine is styled like a conventional soundbar. Placed on an AV shelf in front of you, it looks quite neat. 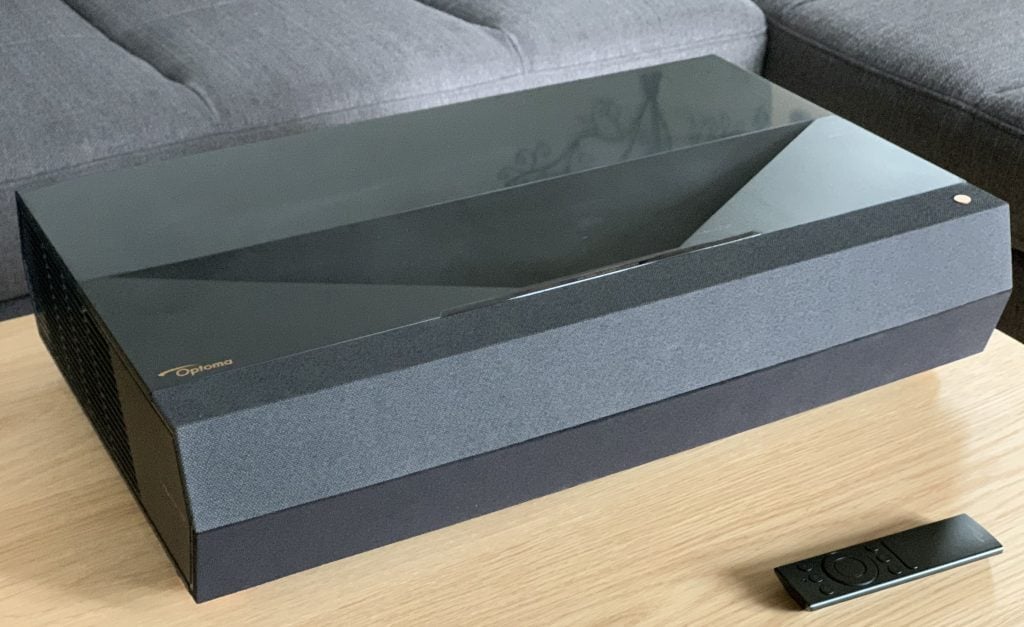 The UHZ65UST has a wide range of connective options too. On it’s right-hand side are USB and HDMI inputs for easy hook up, while to the rear are two additional HDMI v2.0 ports, one of which is ARC enabled. There’s also an optical digital audio output and 3.5mm minijack. For network services, the PJ features both Wi-Fi and Ethernet.

The UHZ65UST packs a single-chip UHD DLP device, which uses mirror flipping to deliver a 2160p pixel dense image, coupled to a bright laser light source. The latter gives the unit TV-like functionality. Switch on and you get an image; there’s no lamp warm up required.

The projector is HDR compatible, recognising HLG and HDR10 content streams. Of course, such compatibility is no guarantee of an HDR-like viewing experience as seen on a flatscreen. Our best hope is always that the projector doesn’t dull down excessively in order to favour highlights. As it happens, the UHZ65UST makes a valiant attempt at managing HDR content, retaining a bright average picture level without crushing blacks.

The UHZ65UST may wear a UHD badge, but it’s worth reiterating that no single-chip DLP model is natively 4K. Texas Instruments’ DMD solution is a variation on the pixel-shifting theme as embraced by Epson and previously JVC, albeit different in mechanics and given the 4K seal of approval by the Consumer Technology Association.

It’s not just the premium styling which sets this UST model apart from rivals. It also boasts some advanced functionality, including geometric correction, something that appears to have trickled down from Optoma’s professional AV projection lineup. This allows you to warp an image if you have something other than a flat surface to project onto. I suspect many will find the feature useful – not everyone has the luxury of a perfectly flat wall to double as a screen. For non-cinephile viewing, perhaps at a kid’s birthday party, it can actually make the most difficult of rooms bigscreen friendly.

Another welcome user innovation is automatic dimming. A sensor placed near the light path automatically dims down the projector’s light output, to protect the peepers of the inquisitive. This will be welcome in households where small children might be tempted to take a closer look.

Another nicety includes support for the DLP-link system for 3D projection, although no 3D glasses are included in the package.

If you’re not using geometric correction, setup is relatively straightforward. Just unbox and shuffle into position to get the required image size from its 0.25:1 throw ratio. A test pattern is available to fine-tune positioning. Typically, you need less than a metre from the wall to throw a 100in image.

While most owners will settle for displaying on a white wall, the projector might also be partnered with a fixed ALR (Ambient Light Rejecting) screen, which will significantly improve brightness and contrast. Optoma sells the 100in ALR101 just for the job.

Operation is slick, thanks to a friendly graphic interface and network apps to enhance usability. An integrated media player allows playback of sound and vision files from USB sticks, as well as access to networked devices.

The UHZ65UST has limited voice control for power and volume control, via Amazon Alexa or Google Assistant, although just because you can doesn’t necessarily mean you should. I preferred the Bluetooth remote control,

1. Optoma has given the UHZ65UST a living room- friendly styling

3. The remote jettisons much of the usual buttonry

which is uncluttered and looks like a distant cousin to that which ships with Amazon’s Fire TV devices.

Display presets cover dark and daylight viewing, and are generally benign and work well, with the exception of HDR Simulation, which just looks a bit odd. When projecting HDR material, the image defaults to a locked-down HDR setting.

Powered up, brightness and colour vivacity immediately impress. While it looks its most dynamic in a darker viewing environment, the UHZ65UST proves entirely usable in rooms with moderate ambient light, thanks to a light output rated at 3,500 Lumens.

This laser engine offers a convincing enough black level, but the output remains inherently bright. This characteristic makes the UHZ65UST a great choice for media rooms and gaming dens. But there is a caveat.

The Final Chapter, with its preponderance of gloomy horror. Chapter 11 sees Ali Larter taking on a giant axe-wielding monster amid a Flashdance-style torrent from sheared shower pipes. This PJ has no problem communicating detail or dynamics – the backlit water, contrasted against a reasonable dark background, looks suitably dramatic. However, while it offers decent contrast (pleasingly, I found DLP rainbow fringing almost entirely absent), there’s a limit to how much shadow detail it can resolve.

Amazing Spider-Man 2 (4K Blu-ray), Andrew Garfield’s second outing as the web crawler, gives the projector more scope in terms of colour vibrancy and overall brightness, and it really gets to shine. The neon-lit showdown with Electro in Times Square looks gorgeous. Blues and golds pop, and there’s convincing HDR dazzle to the action.

The colour purity of the laser light (Optoma quotes 87 per cent coverage of the DCI-P3 spectrum) is wonderful to behold; reassuringly strong, with deep, rich hues.

On the debit side, operating noise is a high 26dB.

The projector expels a lot of heat, and managing this isn’t particularly quiet. Still, the quality of the audio output goes

OPTOMA ALR101: This 100in 16:9 screen is designed to boost performance from Optoma’s UST beamer, using an ambient light-rejecting (0.6 gain) screen material. A slim 12mm border helps it blend in to your room.

a long way to compensating. The four-strong NuForce driver array delivers a convincing stereo spread, and while light on bass, the overall soundstage is crisp and detailed.

If you intend to use a Blu-ray player as a source, ensure you designate the audio output as PCM; while the PJ is Dolby Digital Plus compliant, it lacks a DTS decoder.

This doesn’t impact the overall performance, as the soundbar is stereo, but is worth noting.

This Optoma PJ’s footprint is small, it’s beautifully designed, audio is class-leading and it throws a huge, bright image up close to a wall. The in-built media player, app provision, Bluetooth audio streaming and features such as automatic dimming only add to its appeal. It can probably claim to be the best ultra-short-throw projector for home cinema and media room use available today

This compact Optoma is beautifully styled, and offers vibrant 4K imagery and fulsome sound. If you didn't think you could live with a projector, it may be time to think again.