50in VA TV – AN AWFUL LOT of budget TVs these days carry the HDR label, but it’s fair to say that none of them deliver the eye-popping spectacle of pricier sets. Trickle-down technology has done its bit to steadily improve HDR performance for some budget TVs, however, so when the UE50RU7470UXXU – the 50in model of Samsung’s new, HDR10+ supporting RU7470 series – landed in our labs, we were hopeful it might be able to serve up a little high-dynamic magic on the cheap. 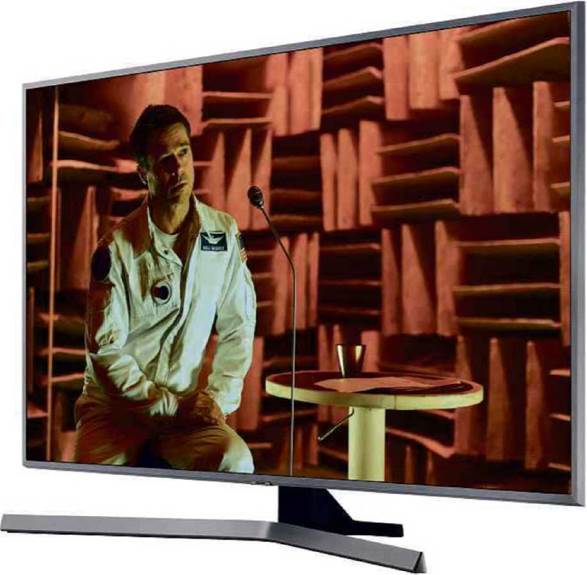 Its VA-type LED edge-lit LCD panel is fairly typical of TVs in this price range and, being 4K UHD, it has a resolution of 3,840×2,160. So far, so ordinary, and there’s little remarkable about the design, either. The display is framed with standard-sized bezels that have the same steel-grey colour as the rest of the chassis, and it stands upon a classic Y-shaped central stand. The built-in cable management at the rear of the TV is welcome, as this keeps cables neatly tidy once you’ve plugged devices into the UE50RU7470UXXU’s three HDMI 2.0a connectors.

Samsung has added Auto Low Latency Mode support to each of the three HDMI ports, which means the UE50RU7470UXXU will kick into gaming mode when it detects a signal from a compatible console, which helps keep input lag to a minimum by toning down the TV’s video processing. At only 15ms, the TV’s input time is as low as any competitor in this price range, making it an ideal choice for competitive gamers. The only disappointment is that the 60Hz panel rules out support for variable refresh rate or Game Motion Plus.

The UE50RU7470UXXU’s speakers aren’t bad at all; there’s even a touch of refinement to the sound here. Dialogue on films and television shows comes through loud and clear so you won’t have to rely on subtitles, but don’t expect room-shaking explosions from the latest blockbusters. As ever, we’d recommend budgeting a little extra for an affordable soundbar.

The VA panel’s semi-reflective gloss coating is less than ideal – a matt finish would have been preferable – but this screen has its strengths, too. By budget TV standards, the UE50RU7470UXXU’s VA panel has a high level of contrast, achieving extremely dark greys that get closer to true black than its IPS rivals. Image quality is pretty great across the board, too: colours are generally pretty natural-looking, human skin tones look impressively realistic, and overall colour accuracy isn’t far off the mark.

Further inspection reveals that the panel’s colour uniformity is also pretty high, apart from mild dark tinting at the extreme outer edges when displaying certain shades. Some shades also cause low-level Dirty Screen Effect, where a solid colour may not look entirely even when displayed across a large portion of the screen.

Even so, the Samsung UHD Processor does a fine job of upscaling 1080p content. It looks fantastically clean, with minimal junk pixellation and barely noticeable ringing around edges.

The video processing isn’t all-powerful, mind you. Overscan, the feature that sometimes cuts off the borders of images to help them fit the screen, cannot be turned off for non-4K content. Thankfully, you’ll only lose 5% of the image at the absolute most.

Sadly, the UE50RU7470UXXU suffers from narrow viewing angles – a common issue with VA screens. In dark scenes, the left and right of the screen glow more brightly than the centre of the panel even when sitting at the ‘perfect’ central position, and the effect worsens noticeably as you shift to either side. The cost-saving use of LED edge lighting rather than local dimming can also produce some jarring brightness fluctuations in transitions from dark to light scenes, and vice versa.

HDR performance isn’t up to much, either. In its favour, the UE50RU7470UXXU manages to cover a respectable 92% of the DCI-P3 colour gamut, but its backlight simply isn’t potent enough to deliver truly great HDR playback. We measured a maximum brightness of 260cd/m2, and this simply isn’t bright enough to do HDR justice.

When playing content mastered to 1,000 or 4,000 nits – as most movies and high-budget shows are – Samsung’s algorithms do their best to retain all the brightest HDR details by dialling down the overall brightness, but the result is that HDR content is robbed of its power and punch. As the TV already has a low peak brightness to begin with, the final result is an image that is far too dark.

Why, then, does the UE50RU7470UXXU score highly? While it’s true that this TV joins a list of budget sets that fail to deliver a worthwhile HDR performance, it also runs rings around these similarly cheap TVs in almost every other regard. Its superb upscaling, fantastic colour accuracy and ultra-low input lag mean that you may not miss HDR at all. This feature aside, it really is a superb all-rounder for the money.

Its HDR support isn't great, but there are plenty of other reasons to buy this affordable 4K TV