Is 8K really worth getting excited about? After checking out Samsung’s latest 75in 8K TV, John Archer thinks it probably is 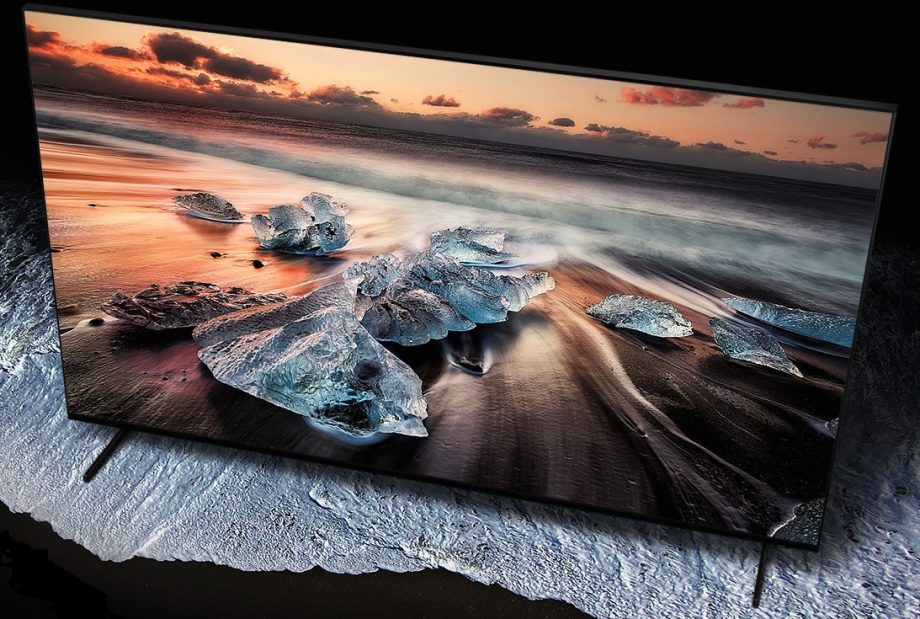 The very top of the current QLED range

WITH NATIVE 8K content potentially years away – and with no obvious method of delivery – plus the concept of 4K still filtering through, consumers seem understandably sceptical about investing in an 8K-resolution display. First-generation models, where Samsung is leading the charge with its Q900R series, are for early adopters and those with sizeable budgets. The 75in Samsung QE75Q900R, however, joins the previously reviewed QE85Q900R [see HCC #292] in proving that 8K TVs do have a point even now beyond mere future-proofing.

The first thing you notice about the QE75Q900R, though, is not how many pixels it has, but how heavy it is. If your body’s got any weak bits, setting up this TV will find them.

It’s also chunky by today’s standards, seemingly sharing the same diet as Samsung’s 4K QLED models. Yet while potentially irritating for people who wall-mount their TVs, I personally don’t mind the bulk. Much of it is down to the implementation of an advanced direct backlighting system, supported by 480-zone local dimming, and – all things being equal – I’d rather have this than an on-trend slender design.

The QE75Q900R also has two design flourishes to make it more welcome in your living room. First, it uses an external connections box attached to the TV via a slim, almost transparent cable. Second, a low-powered Ambient Mode can replace the usual gaping black screen when the TV’s not being watched with either digital artworks or your own photographs.

Of more interest to AV addicts will be the TV’s staggering claimed brightness of 4,000 nits, which aims to work in tandem with its precise light control to allow HDR to flourish, and meet the peak light values of today’s most aggressively mastered HDR content.

The QE75Q900R uses Samsung’s unique QLED technology, which sees Quantum Dots shrouded in metal. This, says the brand, enables them to be driven harder to produce higher brightness and richer colours with HDR10, HDR10+ and HLG sources. (Dolby Vision is not supported.)

A fly in the ointment is that this QLED currently only features HDMI 2.0 inputs, meaning it can’t accept the full 48Gbps feeds associated with 8K video at 50/60HZ via HDMI 2.1. Rival brand LG is gearing up to ship its 8K OLED (the Z9) with HDMI 2.1 out of the box; Samsung is promising a new connections box later in 2019 sporting a full-speed HDMI 2.1 port, which Q900R owners can get free on request.

While that will bring the benefits of the 2.1 specification, it’s not clear right now what external 8K sources this connection might be useful for. In fact, there are currently no real-world 8K sources the QE75Q900R can play.

For audio. Samsung offers a Smart Sound processing engine that does a good job of altering the tone of the sound based on the content you’re watching. But its overall audio performance is fair to middling. The integrated speaker system doesn’t project very well, leaving film soundtracks feeling slightly swallowed and inward-looking.

Native 8K video available for this test was a series of Samsung demonstration sequences provided on USB.

As a caveat, note that such supplied footage is always crafted to look spectacular – but there’s no denying that’s what it does.

Detail levels, particularly with shots across a cityscape, go clearly beyond what you witness on a 4K TV. This can be seen both in small texturing, such as brickwork, and in the overall sense of image depth. There’s no hint of jagged diagonal or curved edges, even if you get much closer to the screen than anyone sensibly would.

The boosted pixel density also creates a more realistic impression – that all-important sense that you’re looking through a window.

The 8K impact isn’t quite as dramatic here – understandably – as it was on the more immersive canvas of Samsung’s 85in 85Q900R.

But there is a difference, and it enables this largescreen TV to achieve the same sort of pixels-per-inch image density you get with small 4K mastering monitors.

With more widely available 4K content, this TV’s upscaling capabilities are all important.

Just as well, then, that they’re very impressive.

Good-quality 4K sources (think Ultra HD Blu-ray) actually look slicker than they do on the vast majority of native 4K TVs, with less noise, more pixel density, and more detail. And these improvements are delivered without the stressy lines and shimmering over fine detailing that can appear on 4K displays if you’re not judicious with their sharpness settings.

The upscaling, handled by Samsung’s AI Quantum Processor, takes source noise out of HD and even standard-definition sources remarkably well. You need to be careful with the upscaling settings – what works for 4K doesn’t deliver the best results with SD – but with a little care, watching non-8K content on this next-gen panel doesn’t feel like a compromise.

The 75Q900RI tested was using Samsung’s latest firmware build – one designed to tackle issues revealed during my previous 85Q900R review.

And. happily, this does deliver a much more immersive, consistent picture.

For starters, during the resplendent 4K Blu-ray of 2001: A Space Odyssey, there’s less backlight blooming when ships appear against the blackness of space.

The intensity of the spacecraft does seem slightly reduced (I measured 2,980 nits on a 10 per cent white window rather than Samsung’s claimed 4,000 nits, and this drops to 1,950 nits in Movie mode). However, this seems a prudent compromise, I and the picture still looks spectacularly dynamic and bright.

The blacks of space appear deliciously deep for an LCD LED TV. Again, maybe not quite as impressive as they looked on the old firmware, but there’s a positive side to this, in that subtle shading and tiny star detailing felt more noticeable.

I dug out The LEGO Movie (4K Blu-ray) once more to sample the TV’s colour handling. As with the 85in model, colours are explosively bright and intense, hitting volumes that are currently beyond the scope of rivals. But it’s not just about extremes; having so much colour range and brightness to play with also helps the 75Q900R deliver additional subtleties in 2001…’s gorgeously enriched 4K Blu-ray colour palette.

I couldn’t help wonder how the Stanley Kubrick movie’s Dolby Vision transfer might have looked on this TV…. but at least the HDR10 image is terrific.

The QE75Q900R is arguably a solution to a problem that doesn’t yet exist. However, if you can afford one, it future-proofs you for when 8K content is a thing, and in the meantime delivers spectacular images

In addition to being ready for 8K when it eventually arrives, the QE75Q900R presents 4K content with sharpness, dynamism and lush colour. An eye-opening TV.

Add your review  |  Read reviews and comments
Where to buy ?

The groundbreaking 1968 sci-fi scrubs up superbly on Warner’s 4K Blu-ray, benefitting from a nuanced HDR/wide colour grade and an 8K restoration.