Designed to bring some of the technology found in Rega’s flagship turntable to a more attainable level, Ed Selley is one of the first to go for a spin with the all-new Planar 8. Read our REGA Planar 8 Review.

Sometimes, the arrival of an entirely expected model can still be surprising. For the last couple of years Rega has been replacing its RP series of turntables with Planar decks, so it didn’t take an enormous amount of deduction to work out that this would continue up the range to include the RP8. What wasn’t so obvious is that the Planar 8 would be so different to its predecessor and almost every other Rega turntable that came before it.

The Planar 8 takes concepts that we have seen in the RP8 and Planar 6, but also borrows from the Naiad – the flagship design that’s built to order in extremely limited quantities that embodies design concepts that until now have not found their way into series production Rega turntables.

In the case of where it isn’t, the main area where this has been tackled is the plinth. At first glance, the Planar 8 is very similar to the RP8 once the outer plinth of the older model is removed.

In reality, the shape is different again

This is by far the easiest Rega arm to set the weight on that I’ve ever used and so is the construction and form (see boxout overleaf). The Planar 8 plinth is 30 percent lighter than the RP8 and concentrates this on the ‘stressed beam’ principle we’ve seen on other Rega designs. This is partnered with a new bearing assembly that holds a one-piece spindle and sub-platter in a brass housing that’s placed in the chassis itself. Significant parts of the Planar 8 are as light as they can possibly be.

With this done, Rega then adds mass at the locations of its choosing. The platter is made of glass, but it is rather more complex than it might first appear. It is a three-piece laminate of two different types of glass with the thickest section at the outer edge. This allows it to have the heavy, ‘flywheel’- like properties that are advantageous in a platter, but for this weight to be concentrated at the outer edge and away from the bearing – which in turn reduces noise in the process.

The motor and power supply are similarly an interesting mixture of design practice we have seen before combined with technology from the Naiad. The 24V Neo PSU is the same 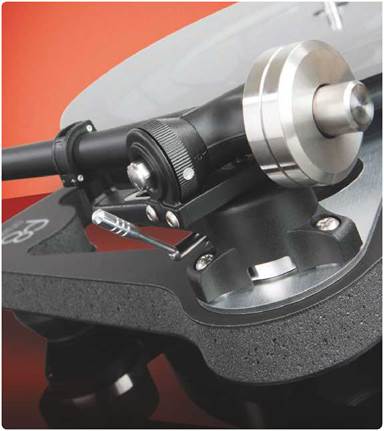 HOW IT COMPARES
Roksan’s Radius 7 (HFC 423) provides a rather interesting comparison. The Radius 7 may be more expensive considering it is not supplied with a cartridge, but it otherwise offers a similar spec. The Planar 8 is more dynamic and while both offer excellent bass, it has the edge here too. The Radius 7 fights back with the fluidity and agility that its Nima arm brings to music. VTA also means that it workswell with a very large range of cartridges. When the savings Rega offers with its cartridges are considered, it’s arguably the better value of the two.

as the one used in the Planar 6. It borrows DSP technology from the RP10 and each unit is paired to a specific motor for the best possible partnership. As well as a clean power feed, you also get selectable speeds and easy fine adjustment. The motor is mounted in the same manner that was developed for the Naiad, with the bottom firmly attached to the chassis and the sides clear to reduce vibration.

It acts on the platter via a belt made out a special rubber, again developed for the Naiad.

The RB880 tonearm is an evolution of the earlier 808. The main difference is a new bearing assembly that reduces the amount of unwanted movement to zero. A slimmer counterweight has been fitted that allows for greater fine adjustment. This latter innovation might sound superfluous, but it is by far the easiest Rega arm I’ve used to get the correct weight setting. Some enterprising dealers have already listed a moving-magnet option too, but Rega feels that the Planar 8 works best with moving-coil cartridges.

All of the flagship Naiad DNA has resulted in a turntable that has fewer of the standard Rega styling features than usual and seeing it in the flesh I’m entirely sold on the design. Like the Planar 6, Rega has done a fine job of making this very light deck feel substantial too. It might sound strange, but the Planar 8 manages to make the anachronistic business of vinyl playback feel like a 21st-century activity.

The review sample is supplied with a factory-fitted Apheta 2 moving-coil cartridge, but to get a better handle on the behavior of the Planar 8, I start by fitting a Nagaoka MP-200 moving-iron cartridge (HFC 434). Connected to a Cyrus Phono Signature (HFC 408) and Naim Uniti Star one-box system (HFC 433), the Planar 8 quite literally makes its presence felt. If this turntable doesn’t put to bed the notion that great analogue bass is tied to mass, I’m not sure what will.

The minimalist presentation of Zola Jesus’ Versions is underpinned by truly wonderful low end. It is tuneful, well integrated and delivered with plenty of force. A little less attention grabbing, the upper registers are equally as compelling and the Planar 8 gets all the basics right to make the vinyl sing. It is entirely pitch stable and silent at idle and this ensures that Nicole Hummel’s strong vocals are convincing and the interplay with the partnering string quartet is laid out in a completely obvious way. With no noise to affect your perception, the Rega is able to deliver a wonderful feeling of scale to even the biggest pieces of music.

Fitting the Ania moving-coil and stepping on to the first official rung of Rega’s cartridge ladder is an instantly worthwhile move. The Ania is slightly on the warm side of neutral and the partnership that this forms with the Planar 8 is extremely pleasant. Together they deliver a level of involvement to voices and instruments in particular that is beyond what the Nagaoka can achieve. The effect this has on White Winter Hymnal by Fleet Foxes is notable. Without losing any of the fundamental accuracy, there’s a level of emotional engagement that is hard to replicate in the digital domain.

One aspect of the performance that is immediate and ‘totally Rega’ is the effortless timing that the Planar 8 exhibits. It’s important to stress that this isn’t only with higher tempo The plinth construction of the Planar 8 is an interesting combination of the Planar 6 (HFC 427) and RP8. Like the Planar 6, it is made from a material called Tan-Cast 8. This is a polyurethane foam derived from the aerospace industry that is sandwiched between two layers of high-pressure laminate to further increase the structural rigidity. Unlike the Planar 6, the foam is now visible at the outer edge of the plinth in a manner similar to the RP8. This is possible because Rega has been able to work with the supplier to introduce a colour to it – it’s normally beige – and the development of a process of sanding and treatment to the outer edge.

One casualty of the development of this plinth has been the lid. Unlike the RP8, there is no outer plinth section and thus, nowhere to hinge it. Rega should be commended, though, for supplying a dust cover as standard and I also really like the use of a metal locator on the cover that slots into an alcove on the plinth to prevent you knocking the arm. The level of dust protection is similar to a traditional lid, but it doesn’t give the same level of protection to the cartridge. Happily, the missing piece to this particular puzzle is the new dedicated wall bracket, designed to keep the Planar 8 safely out of harm’s way as well as aiding its performance.

material. The shuffling time signature of Fink’s Cold Feet provides a fine demonstration of this and the Planar 8 makes it enormous fun. It attacks the raucous Dig Your Own Hole by The Chemical Brothers in a way that has me wanting to down tools and enjoy myself. This is neatly balanced with an ability to work with less than stellar recordings in a way that flatters without sacrificing fine detail.

Installing the Apheta 2 cartridge amplifies many of the attributes of the Planar 8. This is a very fast and potent-sounding cartridge. Connected to a device as agile and responsive as this deck is to experience vinyl as a high-resolution format. The result is much more unforgiving than the Ania, though, and some of the sweetness that the more affordable combination offers is lost. In return, you get a combo that will play anything you throw at it and make sense of it all, regardless of the number of musicians involved and levels they are playing at. The truly epic Star Furnace by The Comet Is Coming is usually a stern test of any turntable, but the Planar 8 handles it without breaking sweat.

Rega’s Planar 8 really advances the idea of what constitutes state-of-the- art vinyl playback at this price. Fitted with the Ania moving-coil cartridge it really hits the sweet spot of the format while the saving allows you to pick up the exceptionally talented Fono MC (HFC 427) phono stage. Almost regardless of the cartridge you end up choosing, it has the remarkable ability to thrill and entertain and is an exceptionally well thought-out design that really delivers

A superb turntable that delivers stunning performance across a huge swathe of different music.

Best REGA Planar 8 prices in the US ?

ES: What design principles found on the flagship Naiad have been employed in the Planar 8?

SW: The latest Planar models have all benefited greatly from the Naiad test bed design. This has played a big part in the huge success of this range. However, the Planar 8 was developed from the outset as a mini Naiad instead of an evolution of the RP8.

It incorporates advanced motor mounting, designed to remove unwanted stress on the motor and further reduce energy being transmitted into the plinth. The EBLT drive belts were originally developed solely for the Naiad and we have invested heavily in further tooling to increase production numbers to allow these advanced belts to be used on the Planar 8.

Does the Planar 8 mark the end of ‘full plinth’ turntables for Rega, at least at the higher end of the range?

I suspect it will. Full plinths will add mass back into the design, so it is hard to see us going back to full plinth designs at this price point and above. The introduction of the new removable dust cover – which uses a simple but clever anti-rotational device, which locates into the plinth to prevent it accidentally damaging the tonearm – was the final part of the jigsaw.

Will there be any future changes to the amplifier range to reflect the Planar 8’s new price point?

We still see the Elicit-R integrated amplifier as a perfect match for the Planar 8. However, we are continually working on a wide range of new products, and we recently introduced the new Aura MC phono stage. I can’t give you full details on other new products just yet, but we certainly have some very exciting new products scheduled for 2019.