Mark Craven auditions a soundbar with surround ambitions and an ear for dialogue. Read our POLK AUDIO MAGNIFI MAX SR.

Polk Audio is the latest brand to add wireless rear speakers to a soundbar/subwoofer system, therefore offering a 5.1 solution to those not interested in the more traditional approach based around a separate amplifier, 5.1 speaker package and oodles of speaker cable. 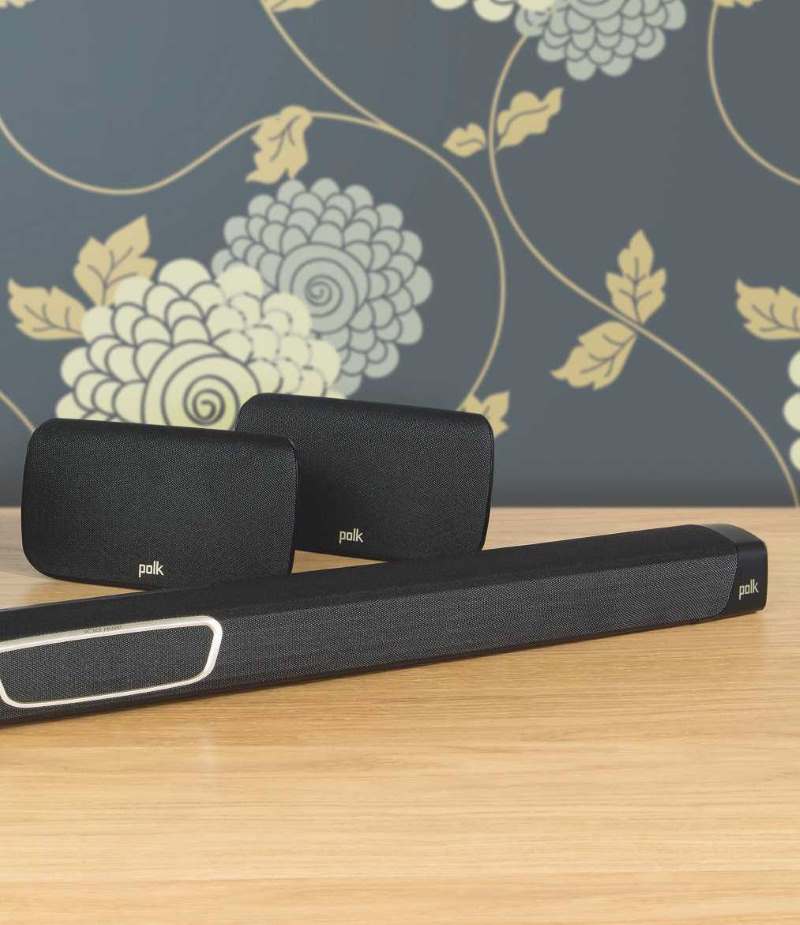 The system in question is the Magnifi MAX SR. It’s the expanded version of Polk’s 3.1-channel Magnifi MAX, itself a more serious proposition than the compact Magnifi Mini.

Polk Audio, now a sister brand of Denon via its umbrella corp Sound United, is well known in its native US for its floorstanding and standmount hi-fi/home cinema speakers, but its main push on these shores seems to be its soundbars. Also recently announced is the Command Bar, which integrates Amazon Alexa AI functionality.

While this feature is absent on the Magnifi MAX SR, it is Google Assistant compatible – set it up through the Google Home app and you can pair it with other Google speakers for multiroom audio.

The main soundbar is sized to be a natural fit to large (but not monstrous) flatscreen TVs and has a neat, curvy design. This round-edged aesthetic is mirrored by the two surround speakers and down-firing subwoofer. All are dressed in black (with some chrome details) and do their best to not dominate a room, although the woofer looks a little like an egg from Alien.

As befits a modern soundbar, the Magnifi MAX offers 3-in, 1-out 4K HDR- capable HDMI switching, plus Bluetooth for device streaming and Wi-Fi for Google Chromecast/Assistant integration. More prosaic connections are a digital optical audio input, 3.5mm audio input, and Ethernet. A USB port, located on the same rear panel on the soundbar, is for service use only.

For its drivers, the Magnifi uses four 1in x 3in oval midbass units, plus dual tweeters and a single mid-range, with a claimed 180W of power spread across them.

The subwoofer is rated at 160W, and packs an 8in woofer. Polk says the system’s frequency response goes down to 35Hz.

The surround speakers require a mains connection; unlike the units on JBL’s Bar 5.1 they don’t use rechargeable onboard batteries. Both sync wirelessly with the soundbar though (as does the subwoofer), making for a neat final installation provided you have handily placed wall sockets.

There’s no automated calibration here, but Polk has endowed the system with a reasonable amount of user control. The supplied remote offers tweaks for surround

1. The SR iteration brings wireless rears to the soundbar party

2. Sensible button placement, although the surround keys are a bit fiddly

channel volume and L/R balance, plus Bass and Voice adjustments in addition to master volume. The latter is a Polk speciality, designed to tackle poorly presented dialogue in TV/movies.

I’m yet to shake my addiction to Kong: Skull Island’s riotous Blu-ray soundmix – the disc never seems to make it back into its case – so I put the Magnifi MAX SR to the test with the movie’s Kong vs Helicopters sequence. 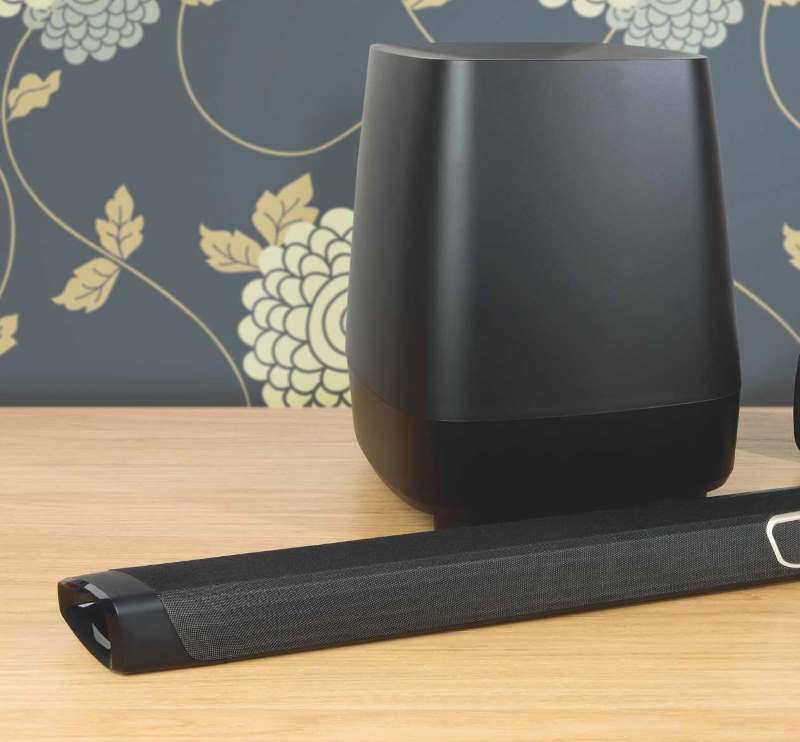 And as a 5.1 system (you wouldn’t buy this package to use without the surround speakers) it succeeds in enveloping you in the aural carnage; when Kong sends the chopper into a downward spiral, the swirling sound design whips around the listening position, with effective pans across the rear L/R channels.

The mains-connected design for the surrounds brings good and bad points. Compared to battery powered models, it’s refreshing to not have to worry about charging them, and their onboard amp implementation ensures they’re not short of grunt. But being tethered to walls affects their placement flexibility, which in turn affects the uniformity of the 5.1 soundfield you can create. To get them in an optimal position, I resorted to a mains extension lead (suddenly that wireless home cinema dream gets further way) and then used the remote’s balance/volume levels to dial them in as best I could.

The system does detail and articulation well. During the Skull Island set-piece, there’s a moment’s respite as a scientist bites down on his sandwich. This visual gag is delivered with clean, delicate and believable sounds. Effects, even amidst the chaos of Kong’s attack, are defined and well-separated, and earlier in the film, when Samuel L Jackson’s colonel takes a call in a phone booth as the rain teems down, the buzz of the army barracks in the surround channels blends in nicely.

Polk Audio’s Voice Adjust tool works considerable magic, effectively raising dialogue levels without making a mess of the soundscape – it helps that its impact can be tweaked incrementally, which is far preferable to a basic on/off choice. You can even lower it from its default setting, which seems a bit weird.

How much benefit it brings is content dependent, though. With Skull Island, I have no complaints about dialogue prioritisation, so while it succeeded here in making chatter more pronounced, is it necessary? I found it far more useful with TV. By knocking the system’s overall volume level down but setting Voice to its maximum, I was able to easily make out Chris Packham’s narration on natural history doc Nature’s Weirdest Events while minimising the inane background music. Handy.

Wonder Woman (Blu-ray) has a soundmix the Magnifi MAX SR can sink its teeth into. The climactic scenes at the German airbase present various challenges – an immersive surround ambience, crackling, largescale FX as Ares wreaks havoc, shouted/muffled dialogue, and the orchestral swells of the film’s superb score – and, overall, its presentation is rewarding. The 8in subwoofer laps up the ominous LFE throbs, and the whole soundstage seems to grow in size as music is used to ram home the sacrifice that Steve Trevor (Chris Pine) is about to make.

That said, the system can be tripped up by differences in low-frequency material. There were moments when I found the sub boomy and unsubtle (but, to be fair, other instances where it seemed well integrated), and lacking in the outright slam (rather than depth) the onscreen visuals deserved. This lack of attack is replicated at the other end of the frequency range, leading to a sound that errs on the side of caution rather than dynamics.

The ‘bar defaults to Music mode with Bluetooth, Chromecast or 3.5mm sources. In addition to whatever DSP this imparts, it lets you cycle between soundbar/sub delivery and all-channel playback. The latter is fun for uncritical listening; the pseudo surround generated if you choose Movie mode out of curiosity isn’t.

Straight-up soundbars have been robbing film soundtracks of their multichannel brilliance for over a decade now, so I’m all in favour of products that fight back against the stereo hordes. The Magnifi MAX SR has a few niggles, but otherwise holds up well

Bass handling and dynamics could be improved but this is still a pleasing concoction of multichannel sonics, superb connectivity and tidy design. Voice Adjust is useful, too.

Bass handling and dynamics could be improved but this is still a pleasing concoction of multichannel sonics, superb connectivity and tidy design. Voice Adjust is useful, too.

PHILIPS 55PUS6753: Keep overall system costs down with this 55in 4K TV from Philips. Direct LED lighting ensures a stable contrast delivery with HDR content, making up for a lack of real brightness. Packs Ambilight and Freeview Play.

3. The surround units can attach to supplied wall-mount brackets