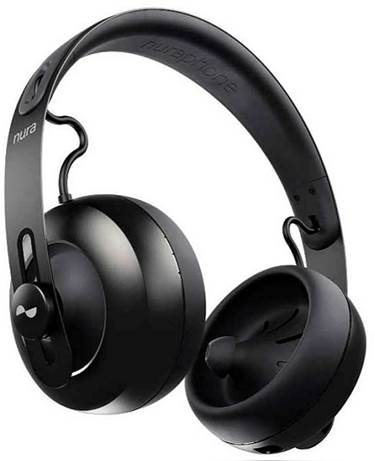 EVEN IN THE crowded, competitive world of headphones, the Nuraphone G2 manage to stand out: they’re quite possibly the weirdest pair of over-ears we’ve ever used, but are also some of the best-sounding.

That weirdness comes from how they sit both on and in your ears. Inside the cups are a pair of mushroom-like protuberances, which play the high mids and treble sounds, while the bass and lower mids are played through a larger driver in each ear cup.

What’s more, these two drivers use what the manufacturer calls ‘immersion’; in effect, haptic feedback that vibrates the outer body of the earcups to reinforce the bass.

These headphones are also different in the way they interpret music and audio. By using tiny, ultra-sensitive microphones embedded inside each earcup, the headphones detect the frequencies to which your ears are least and most sensitive, and will adapt appropriately. This G2 update also adds active noise cancellation (ANC), as well as spoken battery status, the ability to pair to multiple sources and automatic power-on and power-off.

All in all, these are some seriously high-tech headphones, but that doesn’t extend to comfort. They’re beautifully built, to be sure, with soft silicone ear cups and a durable headband, but their relative heaviness meant we were often taking them off just to let our ears breathe for a while. They also stick out a bit too far for our liking, and the fact that they can’t fold flat is a pain.

As far as other features go, the Nuraphones are best described as functionally minimalist. There are no physical buttons on the outside of the cups; instead, they have touch-sensitive ‘buttons’ on the left and right sides, allowing you to take control in a limited way. You can set them to adjust the volume, skip tracks, 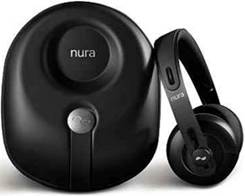 pause and so on with a single or double-tap, and these functions are customisable through the mobile app.

Wear sensors enable the pausing of music when you take the headphones off and resume it when you put them back on. We found this mode occasionally triggered when the headphones were around the neck.

Everything else about the Nuraphones is high class. Even the cables – which are used to charge the headphones or provide a wired connection via Lightning, USB Type-C or 3.5mm analogue sockets – feel luxurious, but the star feature is how the audio signal is personalised to your ears. They do this by playing a series of tones during setup, recording (via the aforementioned microphones) how your ears respond and then producing a custom EQ.

Setting this up is a bit of a faff, as you need to get a perfect seal then sit still while the measurements are taken, and it’s best done in a quiet room, as we got different results attempting it in a noisy office. Even so, it’s worth doing, as the degree of personalisation is very impressive. When we listened to the customised profiles of colleagues, they didn’t sound nearly as nice as our own, indicating that meaningful changes were being made.

ANC is another highlight, despite it merely being added via a firmware update.

By combining the passive noise isolation offered by the in-ear tips and surrounding earcups with active noise cancellation, the Nuraphones neutralise both high-frequency sounds and low-frequency rumbling with startling effectiveness.

They don’t block out quite as much sound overall as the Bose QuietComfort 35 II, but they do a better job of reducing high-frequency noises such as typing and the susurration of nearby conversations.

Sound quality might vary depending on your ears and how well the profiling process went, but in our experience the Nuraphones deliver a sweet balance between warmth and solidity in the mid- and low-frequencies and bundles of crisp detail, without ever sounding harsh or tiring.

Significantly, the sound has altogether more body and character than that of the QuietComfort 35 II, although we were less keen on the vibrating ‘immersion’ mode bass reinforcement: turn the slider up too high and it sounds artificial. We preferred to keep it set very low, so it subtly reinforced the lowest frequencies without negatively impacting on overall clarity.

There’s also a Social mode, which is just the name for a common feature on ANC headphones where you can activate an external microphone to listen out for important sounds or simply to speak to someone without removing your headphones. It’s a good idea, especially as a safety aid (such as when you need to listen out for traffic), but there’s one major flaw: engaging Social mode doesn’t sufficiently drop the volume of whatever’s playing, so you still either need to turn it down manually or take the headphones off regardless.

This is a small gripe, however, and in no way does it significantly undermine the appeal of the weird, wonderful Nuraphone G2. Add in both digital and analogue wired connectivity on top of Bluetooth aptX wireless music, excellent sound quality and a host of clever features you won’t find elsewhere, and you have a very fine pair of headphones indeed.