If you browse your dictionary for the word iconic, you’ll probably see a picture of the M&K Sound S150 next to the definition.

The company has had its up and downs – co-founder Ken Kreisel has departed – but the S150 has been a professional studio monitor of choice for decades.

1. The IW150s may fit discreetly in-wall, but the X12 subwoofer is harder to hide

Since its introduction in 1995, the speaker has been installed in film and music recording studios the world over, and it may well have been involved in the mixing of some of your favourite movies and songs. M&K Sound has recently released the larger S300, essentially moving the S150 down to a mid-range position; but that doesn’t detract from what remains a world-class speaker. 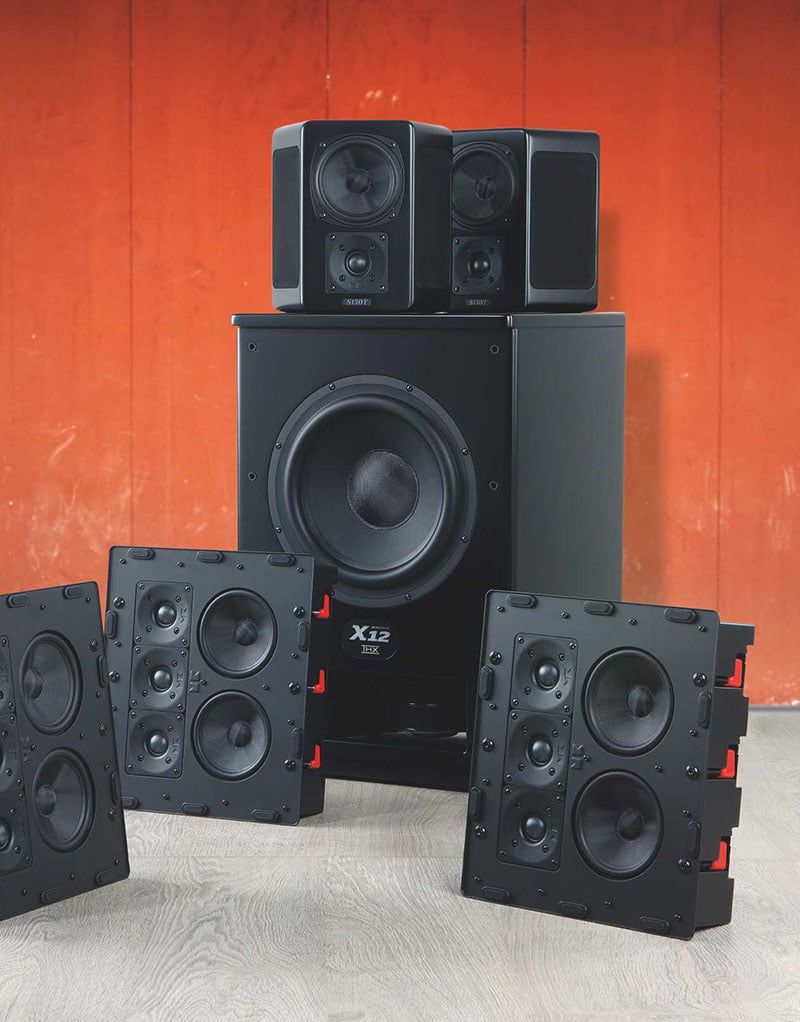 So if the S150 has been around for so long, what’s new from the company? A new approach to installation.

The original speaker uses a traditional box cabinet, which is designed to be positioned on stands or a convenient shelf. The IW150, as indicated by the prefix, is an in-wall version of the S150.

The appeal of in-wall speakers is undeniable; as soon as you can’t see the source of the sound it becomes easier for the listener to be immersed in the experience. This is especially true when it comes to movies, where the whole idea is to create the sensation of actually being in the film’s environment. And for some rooms/people, going in-wall is the only acceptable aesthetic option.

The problem with in-wall speakers is that, as the name suggests, you have to physically put them in the wall, which requires a custom installer, a gifted amateur, or the help of a friendly builder. The other problem is that by removing the speaker from its cabinet and sticking it in a wall, you might change its sonic integrity.

In the interests of full disclosure, I didn’t start attacking the walls of my home cinema with a sledgehammer in order to audition M&K Sound’s IW150s. Thankfully I didn’t need to because the speaker uses a sealed enclosure. While it didn’t look pretty, I was able to place the speakers right up against the wall on speaker stands. This will have had some effect on their overall signature, as the drivers are no longer interacting with an ‘infinite baffle’, but shouldn’t have aversely impacted the performance.

The 5.1 package reviewed here is composed of three IW150s for front left, right and centre, a pair of S150T tripoles for the surrounds, and the X12 subwoofer. It’s probably worth pointing out that neither the S150Ts nor the X12 are either in-wall or new, but M&K Sound deems them the perfect partners for its latest invention.

Of course, if you had enough space, you could use the IW150 for every channel. But the S150T’s proprietary tripole configuration is specifically designed for smaller rooms, where surround speakers are often much closer to the listener. The S150T is THX Ultra-certified, has a lovely cabinet with a black satin finish, and a bracket for wall-mounting.

The also-THX-certified X12 is a beast of a subwoofer, and uses a pair of long-stroke 12in woofers (in a push-pull configuration) in a sealed black-satin enclosure. M&K Sound knows a thing or two about building subs, and the driver array is designed to deliver a total surface area equivalent to a single 18in unit. In other words it should be more than capable of enhancing the bass performance of the relatively small passive speakers. For those seeking an all in-wall system, M&K Sound sells the passive 2 x 8in IW28S subwoofer.

From the front, the IW150 looks exactly like the S150: it has the classic M&K Sound driver layout of three vertically aligned 1in soft fabric dome tweeters down its left-hand side, and a pair of 5.25in polypropylene woofers ranged down the right. The speakers come with white magnetic grilles that can be painted whatever colour the wall is, blending them in with the overall decor.

M&K Sound’s aim here is to reduce the internal volume to 20 to 30 per cent of a normal S150 cabinet, while preserving the neutrality, realism and musicality associated with its design. As a result, the company claims a frequency response for the IW150 of 80Hz to 20kHz and a sensitivity of 90dB, which is very close to the S150 despite the lack of a traditional enclosure.

The cabinet is sealed to provide effective protection, and there are damping pads on the rear to eliminate vibration when in direct contact with the wall.

All the mounting hardware is pre-fitted to the enclosure, including metal clamps to fix speaker wire in the pre-cut grooves, and gold-plated push-on terminals for easy cable connection. There are torx mounting screws

A system with detail, clarity and transience to spare – it’s a performance you’ll instantly fall in love with

on the front baffle that turn special washers for a smooth installation, along with a practical and efficient self-tightening dog-ear clamp system for a flush seal between baffle and wall.

I set the speakers up as I would any 5.1 system, with the three IW150s at the same level along the front wall, just beneath my projector screen. The S150Ts were at a similar height, but to the side and slightly behind the main listening position; the X12 was at the front, located in a part of the room I knew would deliver a relatively neutral bass response. The speakers were driven by my reference Arcam AVR850 AV receiver.

As soon as I started listening to the IW150s, I could tell that M&K Sound had achieved the goal of retaining what makes its speakers so special, while also significantly reducing the size of the enclosure. The front three models perfectly match each other in terms of tonality, but are also utterly transparent when it comes to their delivery.

That’s what you’d expect from a speaker with a studio monitor heritage, but the fact the IW150s can do this given their slender dimensions is nothing short of a revelation.

Although they’re fairly sensitive speakers, they appreciate being driven with a bit of power, and the AVR850 is more than happy to oblige. Pushed into action, the IW150s are effortlessly capable of a pleasingly open sound that fills the room.

There’s a wonderful detail and clarity here, and a sense that you’re hearing exactly what the sound designer or mixer wants you to. The high-end is perfectly rendered, while the mid-tones are also well represented, resulting in an excellent performance across the majority of the frequency range.

Despite the difference between them in cabinet design, the IW150s at the front seem a perfect match for the S150Ts at the rear. As a result, the overall system delivers a beautifully cohesive 360-degree soundstage, allowing for precise steering of effects that remain tonally balanced as they move from speaker to speaker.

If I had one criticism of the IW150, it’s that it’s slightly lacking at the low-end, although to a certain extent that’s the point. These are satellite speakers (they just don’t look like much of the satellite competition) and are designed to be used in a system that’s augmented by a subwoofer.

The bold-looking X12 does this in spades, with a massive bass presence that ably delivers lower frequencies until it crosses over with the IW150s at 80Hz. It’s a top-to-bottom performance that sounds seamless in its integration, built upon a sub-sonic floor that’s evenly distributed.

Dunkirk (4K Blu-ray) has an exceptional DTS-HD MA 5.1 soundtrack, and I was looking forward to hearing what the M&K Sounds could do with it. This quintet didn’t disappoint, delivering the subtly layered mix with an incredible detail that creates a genuine sense of location; be it the sound of surf on the beach, wind blowing across the decks of boats, or the rattle inside a Spitfire cockpit.

The system also steps up to the plate when things kick off, absolutely nailing the terrifying high-pitched scream of the Stuka dive-bombers, and the earth-shattering explosions that follow. Hans Zimmer’s deliberately sparse score is conveyed with remarkable clarity; the ticking watch motif is evident throughout the soundtrack. The system’s superlative mid-range delivery is apparent during the sinking of a troop ship, while the X12 adds a deliciously cinematic low-end presence to the Spitfire’s wing-mounted machine guns. 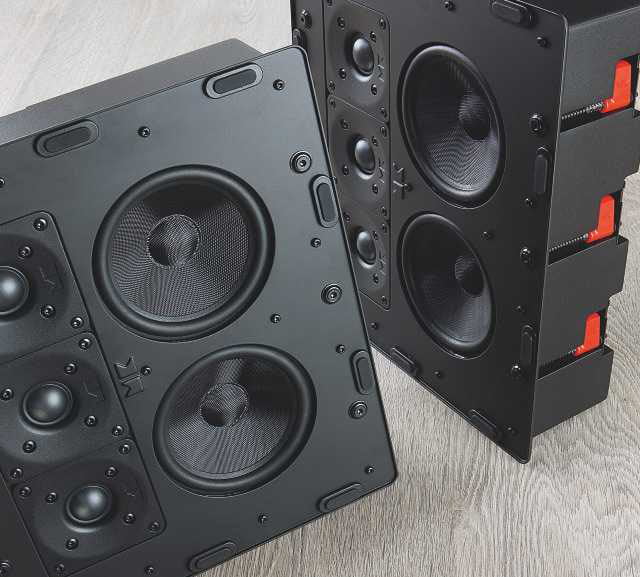 The Blu-ray of A Quiet Place is my new favourite test disc, with an incredibly complex soundtrack that manages the near-impossible task of creating silence. Despite the protagonists’ efforts to remain unheard, the mix itself is filled with subtle audio cues, such as wind rustling through the leaves, and the hums and clicks of insects. These all come through with exceptional realism and precise localisation, immediately immersing you in the world of the film.

It’s also a film that makes creative use of dynamic range, because when someone (or something) does make a noise, my God you know about it. The transient response of these speakers is incredible, viscerally delivering the scares as the soundtrack suddenly goes from relative silence to very very loud. The tendency of sound designers

Erik Aadahl and Ethan Van der Ryn to add plenty of low-frequency heft to these moments for greater impact finds the X12 in fine form – it handled the dynamic beats with ease, establishing a solid foundation and carefully locking in with the other speakers. 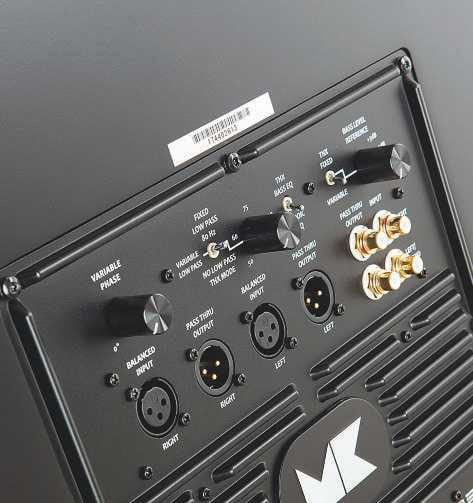 Dunkirk and A Quiet Place aren’t big on dialogue but when I moved on to Whiplash (Blu-ray) the abuse that J. K. Simmons hurls at Miles Teller is projected with spiteful precision. The main reason I chose this disc, though, was to ensure the IW150s had retained M&K’s musicality as well as its transparency. I quickly had my answer, thanks to a system that’s tighter than a syncopated jazz quartet, carrying off every high hat, cymbal and snare drum with excellent timing.

M&K Sound already has a solid reputation with home cinema fans, and the company’s new in-wall range makes for an interesting development. Its ambition has been vindicated with an exceptional speaker that achieves the goal of delivering the brand’s signature sound from an incredibly discreet enclosure.

Here they’ve been blended with other models culled from the M&K Sound range to produce a 5.1 system with detail, clarity and transience to spare. It’s the kind of performance you’ll instantly fall in love with – grab yourself an audition

All the transparency and detail of a professional studio monitor, in an enclosure that can simply vanish. If you're looking for in-wall speakers, look here.

This receiver uses Class G amplification to drive its seven channels, and Dirac Live room correction to fettle the surround performance. Dolby Atmos and DTS:X decoding are naturally on the feature list.

2. A tripole design, the S150T ensures a wide surround dispersion

3. The IW150s feature a trio of tweeters and twin midbass drivers