June 26, 2019 1113
$309.00 Buy It Now
This impressive system delivers a big and balanced performance combined with exceptional sensitivity, but visually the horn tweeters remain an acquired taste. 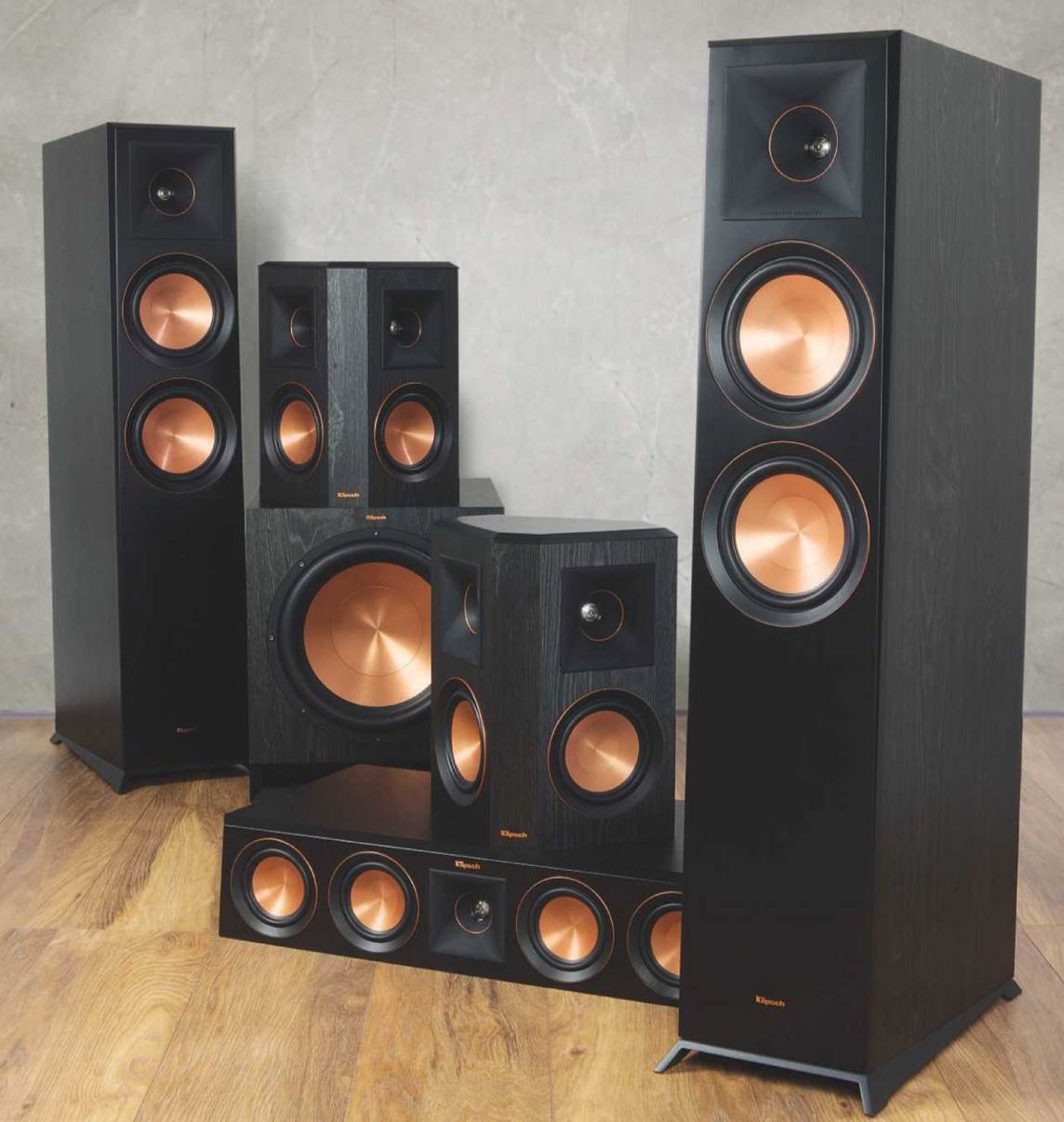 Hear the name Klipsch and chances are the first word that comes to mind is horn, or horn-loaded tweeters to be more precise. The US brand has been ploughing that particular technological field for over 70 years, from its first speakers to its new, updated Reference Premiere series.

The Reference Premiere lineup sits above the rather confusingly named Reference Series (reviewed in HCC #293), and is aimed at a home cinema environment.

The range has been expanded to 18 models and includes floorstanders, five different centre speakers, wide dispersion surrounds, a Dolby Atmos module, and specially engineered subwoofers. But it isn’t just a case of more models. There are also audio innovations, improved materials, and cosmetic changes.

Klipsch’s proprietary Tractrix horn technology finds the tweeter unit mounted inside a square horn assembly that retreats into the cabinet’s front baffle. This approach is intended to correct the difference in air pressure between the tweeter and the air in front of it, resulting in, says Klipsch, improved sensitivity and better HF dispersion.

The tweeter itself uses a ceramic magnet housing and venting, combined with a rigid titanium diaphragm.

The midbass drivers are Klipsch’s signature copper- spun Cerametallic designs, while the low-end is given a boost thanks to Tractrix reflex-ports that help work to limit distortion and maximise efficiency. The drivers have a striking copper colour that stands out against the black satin painted, scratch-resistant baffles, and the copper trim rings around the woofers and tweeters are a nice flourish. All models come with magnetic black fabric grilles, and the range also offers a choice of ebony or walnut vinyl finishes.

The overall design of the Reference Premiere series might not be to everyone’s taste. The horn-loaded tweeters give the speakers a slightly retro appearance, and if you can look past them you’ll notice the cabinets also have a boxy feel. But you can use the grilles to cover the tweeters and drivers, and whatever you may think of the aesthetics there’s no denying the MDF construction is extremely solid.

Another concern might be the speakers’ general size. The RP-6000F floorstanders especially might require some pre-planning – not because they’re overly tall (at just over 1m) but because they’re 43cm deep.

The 5.1-channel system reviewed here is built around the £ -per-pair RP-6000Fs, which are joined by the £ RP-404C dedicated centre speaker, two RP-502S surround speakers, and the SPL-120 subwoofer. Depending on your requirements there are plenty of options to expand the configuration into something a bit more immersive, including Klipsch’s RP-500SA Dolby Atmos module.

The RP-6000F is the middle of five floorstanding Klipsch Reference Premiere models and uses two 6.5in woofers, combined with a 1in tweeter and an inner-flared rear port. There are dual binding posts for those who like to bi-wire or bi-amp, and each speaker has cast aluminium feet that provide support and isolation.

Klipsch has taken an interesting approach to the design of the RP-404C centre speaker. It has the same 1in horn-loaded tweeter in the centre but uses four 4in midbass drivers – two on either side. This configuration reduces the height of the speaker, which is handy for those trying to fit it in front of a TV, while naturally making it rather wide. The idea, as seen on the Reference Series, is that the driver quartet equates to the same radiating area as the two larger drivers in the floorstanders. The RP-404C is also rear ported, has a single set of binding posts, and comes with stick-on rubber bumpers.

The RP-502S is a dedicated surround speaker that uses Klipsch’s Wide Dispersion Surround Technology (WDST). That means this (sealed) speaker has two 5.25in midbass drivers and two 1in tweeters firing away from each other at an angle (it’s basically a bipole design), distributing surround sound information across a wider area. On the rear you’ll find a keyhole for mounting it to a wall, a single pair of binding posts, and, again, rubber bumpers to save your paintwork.                                    >

All the speakers have a nominal impedance of 8 ohms and the RP-6000F and RP-404C claim a sensitivity of 97dB (the quoted figure for the surrounds drops to 95dB).

Speaker sensitivity is an interesting subject, and one that could take up an entire article. However, it basically relates to the amount of power required to drive the speaker.

The more sensitive (or efficient) the speaker, the less power is required. The measurements above relate to the sound output from one watt of power measured at a distance of one metre. An efficient speaker doesn’t just require less power, it also generates less heat and generally has a longer component life.

It features a 12in long-throw Cerametallic driver that is designed to complement the other speakers (even aesthetically), and is powered by a 300W RMS (600W peak) Class D amplifier. The enclosure is a bass-reflex design with a front-firing slot, and the sub has a claimed frequency response of 24Hz-125Hz.

The design essentially mirrors the rest of the system, aside from the black fabric grille which attaches using studs. Annoyingly these are on the sub itself, rather than the grille, so poke out of the front baffle when the latter is removed. For one less cable in your life, it can be used with Klipsch’s optional WA-2 wireless kit.

In honour of the 50th anniversary of humankind’s single greatest achievement, I decided to kick things off with the excellent Apollo 11 documentary on Blu-ray. The disc’s DTS-HD MA 5.1 soundtrack doesn’t muck about, and the Saturn V launch is about as big an audio sequence as you’re likely to hear. The sequence really builds in tension before reaching a crescendo as those massive engines fire, at which point the sensitivity of this Klipsch system is immediately apparent.

There was no need to push my Arcam AVR850 receiver at all for the room to be awash with the thunderous roar of that mighty moon shot. All the speakers are engaged, while the subwoofer patrols the lower frequencies and crosses over seamlessly to the rest of the system. The centre speaker is also very impressive, holding its own against the space age sonic maelstrom and ensuring the chatter of astronauts and launch control is presented with admirable clarity.

In anticipation of a new Men in Black movie arriving at our multiplexes, I moved on the 4K BD release of the original film. This has a new Dolby Atmos mix that I ran in 5.1, and the results were hugely enjoyable. The sequence where Agent J (Will Smith) touches a floating ball and it then zips all over the place provides plenty of opportunities for effects to flit from speaker to speaker. This package was thrillingly precise, with glass shattering clearly from various points of the room, as the whizzing ball zooms around.

This is noteworthy because it revealed that, despite the different-size midbass drivers across the Klipsch array, 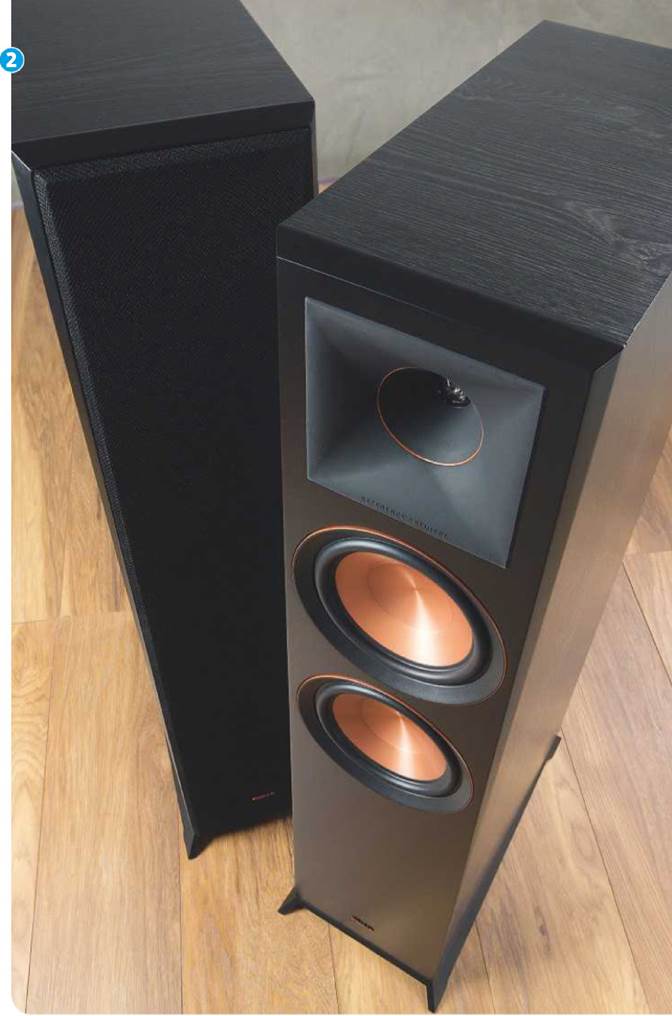 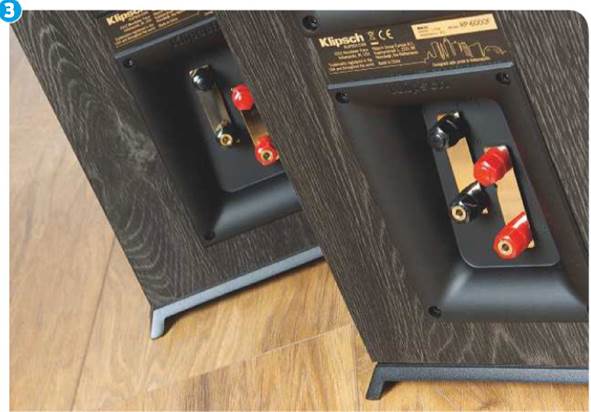 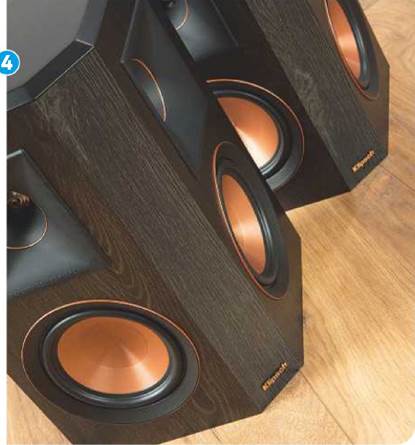 3. …while around the back, there are twin binding posts for bi-amping/wiring

4. Klipsch’s surround models aim for a wide dispersion via their dual angled baffles

the ensemble is able to retain a cohesive and tonally balanced soundstage.

It’s also able to deliver a big and bold cinematic audio experience. This was best exemplified by the final act scene where Agents J and K (Tommy Lee Jones) shoot down a flying saucer. You get a feeling of the size and weight of the saucer as it flies, before exploding and crashing at our heroes’ feet like a sonic shockwave. The RP-6000F floorstanders retain plenty of depth on their own (the suggested low-frequency reach is 34Hz), and the sub goes deeper still. The saucer slams into the ground and you feel it.

Looking at the speakers, their ability to hit hard and go loud is probably expected. Yet this doesn’t come at the expense of resolving power and subtler soundstaging.

With sequences from A Quiet Place (Ultra HD Blu-ray) – a film that’s primarily about not making any noise – the system proved capable of revealing effects that are kitten’s breath quiet. It pulled tiny acoustic details out of the

soundtrack, such as chirruping insects or gentle footsteps, and presented them with unerring accuracy and realism. But again there was no denying the dynamic strength of these cabinets, and the movie’s sudden loud noises are delivered with ear-shattering clarity.

The excellent centre speaker ensures the Klipsch front soundstage has plenty of width and scale, while also resolving dialogue with a clear focus. The wider dispersion of the angled surrounds adds to the effect, allowing the back of a soundmix to spread out, filling the spaces behind and to the sides of your listening position. With the new Black Hawk Down 4K Blu-ray, which boasts a Dolby Atmos track that puts you as close to combat as you’ll ever want to get – this equates to bullets ricocheting around the room and explosions seeming to rip through the walls.

The effective integration of the SPL-120 subwoofer finds these explosions hitting with plenty of delicious low-end impact, but there’s also a percussive thump to the large calibre machine gun-fire. The scene where the Little Bird helicopters strafe the buildings with a mini-gun was particularly brutal.

In fact, the Klipsch system loved everything about this soundmix, creating a convincingly, consistently immersive soundstage. Helicopters fly slickly through the room, shell casings tinkle to the ground, and the score is delivered with a pleasing musicality. The experience was visceral and thrilling. Which is what home cinema is all about.

Klipsch has been around for the better part of a century, and while its proprietary horn technology might look dated… if it ain’t broke don’t fix it. Those decades of experience have culminated in a line of speakers that’s wonderfully effective. The cabinets are unashamedly big and the performance has a boldness to match, but they also have a remarkable level of resolution and sensitivity.

If you’re looking for speakers that can deliver the highs and lows of a modern blockbuster without requiring a shed-load of power, this particular system makes perfect sense – and it’s not insanely priced, either

This impressive system delivers a big and balanced performance combined with exceptional sensitivity, but visually the horn tweeters remain an acquired taste.

$309.00 $339.99 15 used from $264.99 33 new from $299.00
in stock
View
Amazon.com
Last Amazon price update was: December 3, 2021 2:40 pm
× Product prices and availability are accurate as of the date/time indicated and are subject to change. Any price and availability information displayed on Amazon.com (Amazon.in, Amazon.co.uk, Amazon.de, etc) at the time of purchase will apply to the purchase of this product.

BLACK HAWK DOWN: A brilliant movie treated with the care it deserves on 4K Blu-ray. Impressive HDR grading and a Dolby Atmos remix make it an AV showcase, while a wealth of bonus material resides on an additional Blu-ray disc. See p92.