They may look like small loudspeakers but in fact the Klipsch Reference R-5IPMs are a complete hi-fi system, with 60 Watts per chan­nel plus an array of inputs and remote control. Unbelievable. But can they be any good at this low price? I measured them and listened to them and came away surprised. They are definitely worth knowing about if you fancy a budget all-in-one with some interest­ing strengths.

What you get at this price is a pair of compact MDF cabinets measuring 338mm (I3.3in) high, 178mm (7in) wide and 232mm (9.12in) deep, finished in artificial black ash veneer. With a modest weight of 4.8kg they’re easy to move around and can stand on a I0in deep shelf, for example, although I2in would give easier rear access since there’s quite a lot at rear including a rotary volume control. However, these ‘speakers are meant to be remote controlled from a small, light, plastic handset. It is very easy to use, being dedicated to the ‘speaker only, not to other Klipsch products, so there are no superfluous buttons to clutter the fascia.

One loudspeaker (Right) is powered and needs a mains connection, the other is a slave. A 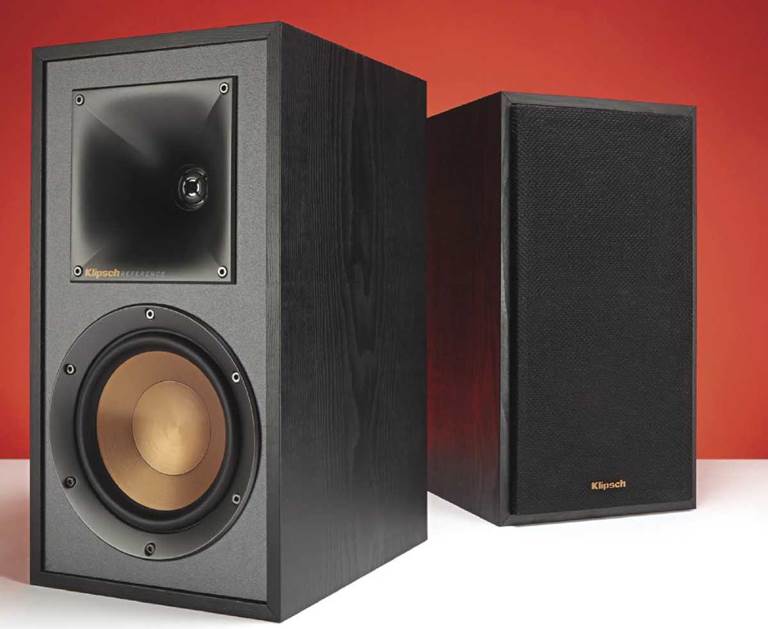 slim cable connects them through ordinary loudspeaker terminals; there’s no dedicated connector as with some interconnected loudspeakers, and this makes linking easy, the cable supplied measuring 4metre (12ft) long.

With no app or such like, set­up is quick and easy, the only slight puzzle being that if you want to use a turntable to spin LP then it will have to be placed close to the Right loudspeaker cabinet. I did this by placing the ‘speakers on stands, one being next to a rack system with our turntable at top. Best not to place a turntable on a shelf next to the Right speaker because it will suffer

So as you’ve now guessed, these active loudspeakers can accept a turntable, with moving magnet (MM) cartridge. But they can also accept much else, having analogue line inputs through phono sockets when LP is not used (switch selected Line/Phono), analogue line input via a 3.5mm jack, digital input via an optical S/PDIF cable or USB B computer 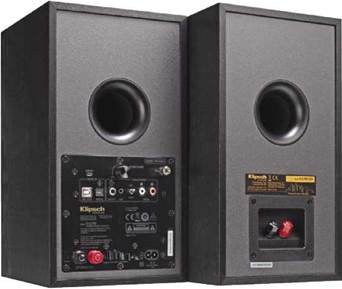 One loudspeaker (Right channel, seen at left from rear) carries 60 Watts per channel Class D amplifiers, a digital-to-analogue convertor, Bluetooth wireless and a phono stage for a turntable. A computer can be connected via USB B. The Left channel is an unpowered slave, connected by a slim cable.

connector, as well as Bluetooth wireless input from a smartphone, tablet or portable player.

Inside there is a “60 Watt all-digital amplifier” driving each channel Klipsch say, confirmed by measurement (see Measured Performance).

The treble unit is a 1in (25mm) aluminium dome behind a Tractrix profiled horn (see Wikipedia on this). Below lies a 133mm bass/midrange unit with spun copper front on what Klipsch describe as an IMG cone drive unit, so presumably a layered cone with frontal copper on a IMG base. This drives a rear ported cabinet. The grilles are magnetically attached and acoustically transparent our measurements showed, so can be used on or off.

I started out by running the digital optical output of our Oppo BDP- 205D Universal player to the Reference R-51PMs for CD from a good source. This ‘sort of’ went well and was impressive, showing 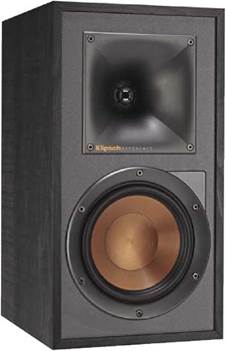 immediately that the ‘speakers have a grippingly large sound stage that makes them stand out. The Tractrix horn of the tweeter works well here, delivering a massively spacious sound that engulfed the area beyond the loudspeakers at left and right. There was a sense of height too, images occupying area rather than being pin-point. As I span a stream of uncompressed review tracks and moved around the room to grab CDs, I also became aware that the stage was vertically phase consistent, sounding much the same wherever I was in the room.

All went well with CD, Antonio Forcione’s guitar in Tears of Joy was large and forward, strongly lit but not spitty up top. Josefine Cronholm singing In Your Wild Garden was also pushed right out and took on big presence; there was almost a glare here. Klipsch’s R-51PM ‘speakers are detailed and insightful, forward and with large scale.

The bass line in this track was reticent until I selected bass EQ, but

this was in our large listening room. In smaller rooms, for which the R- 51PMs are designed, and near-wall placement they will better match work with room modes to give a balanced result that avoids room boom.

There are no tone controls, only dynamic bass EQ that lifts bass at low volumes, but less so as volume rises to avoid overload. It was easy to use and effective, adding obvious extra ‘boing’ (a slightly bouncy quality) without overdoing it, so the speakers remained in control – free of bass wallow. A matching sub-woofer is available.

It was when I got to Nigel Kennedy playing Vivaldi’s Spring that I felt the strings of his Strad, and those of the English Chamber Orchestra behind him, were a tad on the hard side. This property was there with Rock but less intrusive. So I jumped up and connected the Oppo’s analogue output to the Aux input, in effect bringing in the player’s ESS ES9018 Sabre32 Series DAC – and what a difference! Now there was tonal colour in the sound as if sunlight had flooded in, violins taking on an altogether livelier and natural quality, whilst still being strongly embodied on the big sound stage.

The message here is, then, that the digital section is not the sweetest and most tonally rich – but that’s what we know from budget digital. To get the most from these ‘speakers – and they really are very good – best to drive them from their analogue inputs. Bringing me to LP.

With an Audio Technica VM750SH Shibata tipped cartridge in our SME309 arm on Timestep Evo modified Technics SL-1210 Mk2 Direct Drive turntable, the R-51PMs came alive, throwing out a huge stage with nicely solid bass. Hand drums were dryly controlled, stabbing at me in Hugh Masekela’s Uptownship (180gm, analogue) and his trumpet blared out in big form. There was some slight glare again; the tweeter is forward but that’s where all the detail and projection comes from.

Similarly, Cheryl Porter singing God Bless America on Two Countries One Heart (180gm analogue) was dangerously close at times (!) when I turned volume up, but the images and the sound stage were so high and wide anyone would be impressed. For such a small loudspeaker they deliver a spacious sound unrelated to their size. The dryness of the sound (no bass waffle) kept LP neat but sweet – and certainly impressive.

The two went together very well.

These little loudspeakers outperformed themselves!

The Klipsch Reference R- 51PMs were beyond good at the price. Impressively large and open sounding, their huge sound stage suited Classical

and Rock equally. Where small speakers commonly sound pinpoint focussed, these put up a massive display. Being used to a large stage from our Martin Logan ESL-X electrostatics I was quite taken aback to hear the R-51PMs attempting to go there. 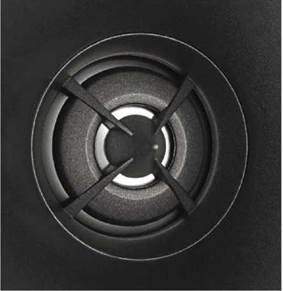 The aluminium dome tweeter has a front phase plate to smooth its output, before being guided into the room via the Tractrix horn.

They’re not electrostatics – far from it – but at the price they manage absurdly well. With so many inputs and such ease of use, plus a low, low price – well worth getting an audition.

Through analogue Aux input (3.6mm jack), frequency response of the R-51PM showed some small upper mid-band lift of a few dB around 4kHz. Measuring 20 degrees off-axis lessened this a little, but our third-octave analysis of pink noise (green trace) shows the ‘speaker still has a peak here and will sound forward as a result. It will also very detailed, especially as high treble is strong up to 12kHz. 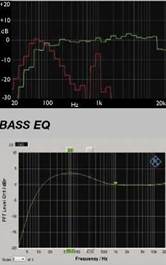 downward to 60Hz where it is -5dB down. This means it will be lacking in warmth unless placed close to a rear wall in a small-ish room (up to 14ft long or so). The port (red trace) provides extra output around 60Hz, giving fast if not deep bass. There will be no subsonics, as you might expect from such a small cabinet. Selecting EQ provided bass boost of +5dB at 70Hz at low volume (1 Watt out, 1V in) to lift deep bass and add a little warmth by lifting the lower midband.

Fed an analogue signal via its sensitive Aux input (3.5mm jack) the R-51PM delivered a loud 90dB sound pressure level (SPL) at 1m from just 66mV in, well within the output of a mobile ‘phone headphone socket (typically 800mV).

Unusual is the addition of a MM phono stage for direct turntable connection to this loudspeaker. Applying RIAA pre-equalised pink noise showed the R-51PMs were perfectly accurate here.

The amplifier delivered its rated power of 60 Watts into 6 Ohms and frequency response was as shown, with deep bass below 20Hz curtailed.

The R-51PM loudspeakers measured well, having a forward upper midband that will make them sound vivid.