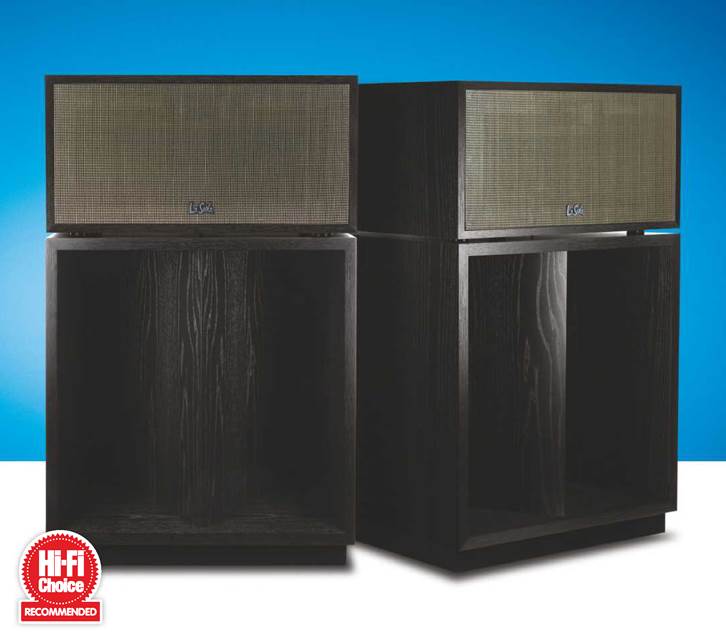 Loudspeakers hold a special place in my heart, as one of the most individualistic and characterful of things. It’s hard to accord ‘personalities’ to inanimate objects, but I find myself doing this with speakers far more than – say – streamers or preamps. The reason is that there’s no one single widely accepted way of designing the perfect one. Instead, engineers arrive at seriously high

performing designs by all manner of routes. In the same way that ABBA’s Dancing Queen and Van Halen’s Jump are both great – but very different – songs, so we have all manner of incredible yet distinctive speakers.

As with pop music, most speakers are fairly generic, purpose-built products to do a particular job at a certain time. There’s nothing wrong with that, but every now and again we come across something that’s special, regardless of its price, size, shape and/or type. From Quad’s brilliant first electrostatic, the ESL-57, to Wharfedale’s iconic original Diamond mini monitor, sometimes things just hit the spot. To this list you can now add the Klipsch La Scala. It was designed by Paul Klipsch for his friend Winthrop Rockefeller, to be used as a public address speaker for his Arkansas gubernatorial campaign back in 1963. Yet it soon became an official Klipsch product, selling as an ‘auditorium speaker’.

The La Scala AL5 is the latest and greatest incarnation of this, effectively a hybrid of the old and new. It visually dominates even a medium-sized listening room (it’s frankly too big for anything smaller), so you have to be a fan of its functional retro looks to live with it on a daily basis. Its vast two-piece cabinet isn’t something you can hide behind a picture frame and its hefty 91kg weight is such that you won’t want to be moving it around too much either. It comes with a choice of natural cherry, satin black ash or American walnut book- matched wood veneers, all hand finished in Klipsch’s factory from veneered birch plywood and MDF, with 25mm-thick walls. The upper section comes with a magnetically affixed grille, which tones this speaker’s striking looks down a little.

Inside, you find the three drive units that play such an important part in the overall sound. First, there’s the huge K-33-E 381mm woofer, which runs from a claimed 45Hz up to 450Hz. This sports a light composite fibre cone, and sits behind a two-fold birch plywood and MDF horn that’s said to be a smaller version of the Klipschorn’s three-fold design. Above this, the midrange compression driver takes over, a 50.8mm K-55-X unit with a phenolic diaphragm; this fires into a large exponential horn. At 4.5kHz, the 25.4mm K-771 tweeter kicks in; it

has a lightweight polyimide diaphragm that sits at one end of Klipsch’s 90° x 40° Tractrix horn. AudioQuest Type 4 copper cabling is used to connect everything up. This results in a claimed frequency response of 51Hz to 20kHz (+/-4dB) and a power handling of 400W, with a nominal impedance of 8ohm. These are very good numbers of course, but the real eyebrow raiser is the quoted sensitivity figure of 105dB/1W/1m. This makes it one of the most efficient commercially available loudspeakers in the world, and it’s a total game changer as far as the amplification you can use it with is concerned. Suddenly, some real exotica comes into play, like ultra-low powered parallel single-ended valve amps, for example. The Klipsch will go louder with 1W than most speakers will go with way more power. In terms of placement, the main issue is whether you have a house with a listening room that’s physically large enough. Another challenge is actually getting the cabinets inside; for example, those in a fourth-floor flat and no access lift should turn the page now! If you’ve got a decent-sized room, however, you’ll need to place each speaker at least 50cm from a rear wall, ideally twice this, and slightly toed-in. It’s also good for it not to be 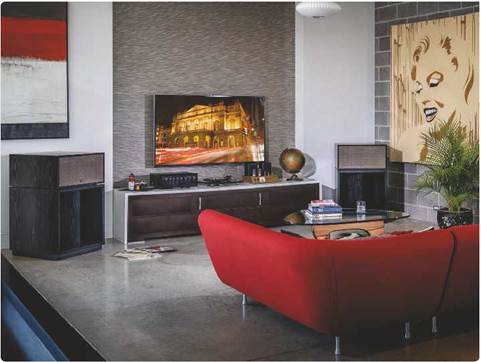 If space is a premium in your listening room, this probably isn’t for you…

too close to a side wall, as that can muddle stereo imaging.

Properly installed, run in and warmed up, you soon realise the La Scala AL5 is a seriously special performer. Super-sensitive loudspeakers tend to work really well in two respects. Because they give a lot of air movement for relatively little power, they often have great transient speed. It’s not as if the amplifier has to huff and puff to muster enough punch to get the driver moving. And so it proves that this is the defining characteristic here – it’s ultra-fast, and as a result, enormous fun to listen to. It makes music expressive and engaging in a way that precious few conventional loudspeakers can.

A great example of this comes from The Jam’s A Town Called Malice. By no normal gauge is this an audiophile recording; it sounds like it was done on a cheap eight-track in a tatty South London studio. It’s pretty compressed, has a narrow soundstage and none of the instrumental tracks are especially nice to listen to, while Paul Weller’s voice is nasal. Yet the big Klipsch makes it riotously good fun, thanks to the visceral speed of the sound. Basslines are super fast and taut, snares and hi-hat cymbals are sharp and propulsive, and the band sounds brilliantly syncopated with one another. The Jam was a famously ‘tight’ band, and suddenly I can hear why.

Secondly, because a speaker such as this is so easy to drive, it doesn’t burden the amplifier. Most amps are happiest when they’re in the middle of their operating range, because distortion tends to rise with power output. Because this is so sensitive, you can use low-powered amplifiers and run them relatively unstressed even at high-ish volumes. This contributes to the general sense of ease and poise; you never get the feeling that things are struggling as the amp tries to force the sound out at you. When the volume is turned up on the aforementioned Jam track, there is no sensation of the speaker sitting on dynamic transients; I can really hear the accenting of the organ and guitar work, alongside the restrained anger of Paul Weller’s vocals. Even though the sound is dramatic, it is never strained – and that’s a classic big Klipsch hallmark.

Another memorable facet of this loudspeaker is its bandwidth. There are few designs that properly cover everything from low bass notes right up to high treble – and fewer still that actually do justice to them. Yet here the La Scala AL5 shows the benefit of its sheer physical presence; listening to it never gives the sense of music being squeezed through a toothpaste tube. It’s physically possible for this big banger to cover all the bases, from bottom to top on the frequency spectrum. Through most speakers, REM’s Maps And Legends is a murky, muddy-sounding recording because it has lots of deep bass guitar work that can over power the midband, or drown out those lovely ride cymbals.

803 D3 floorstander is as good a comparison to the Klipsch as any. It’s a conventional bass reflex design that succeeds by the superb quality of its drive units and build. It is more detailed and incisive with lower colouration and a more even and accurate tonality. Yet it’s nowhere near as much fun to listen to, making music sound more matter of fact. Though technically more correct sounding, it’s very much a heart versus head decision. 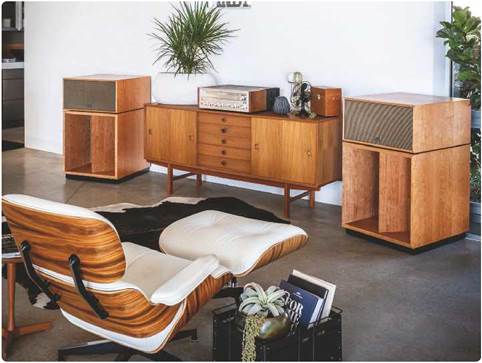 Even at high volumes, the big Klipsch stays completely in control, effortlessly – nonchalantly even – carrying the propulsive bass guitar playing while keeping the midband clean and open. So many conventional floorstanders either show strain with this track, or don’t do it justice because they’re out of their comfort zone – but the Klipsch laps it up and asks for more.

No review of what was originally an ‘auditorium’ speaker would be complete without a discussion of its stereo imaging. The La Scala 5 has lost nothing of its distant ancestor’s ability on this score, for it can fill even a large sized listening room at the drop of a hat – and would, I imagine, love the chance to do its thing in 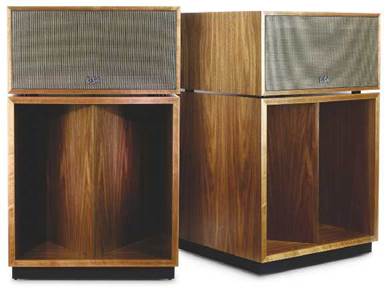 something the size of a village hall. Isaac Hayes’ spacious-sounding Cafe Regio’s is cued up, an exquisite early seventies Stax record that can sound vast on the right equipment. The big cabinet duly does its job, serving up a highly expansive soundstage that is also very tightly defined. Image location within it, for example, is extremely good, with all the different strands of the mix placed in space just as they should be. The only downside – if you can call it that – is that the soundstage doesn’t drop back as far as some other high-end speakers I’ve heard. Instead, the sound always comes out to meet you.

This hefty speaker has a multitude of talents then – speed, dynamics, rhythm, bandwidth, soundstaging and definition – but like every other, it is not without its imperfections. Some will find the La Scala AL5 a little tonally dry, because it lacks the warmth and sweetness of certain other designs. This is most noticeable on acoustic music, such as orchestral or jazz. For example, Beethoven’s Pastoral Symphony with Karajan conducting the Berlin Philharmonic is wonderfully powerful, punchy and dramatic, yet the tone of the string section seems a little too thin for my tastes. With jazz, Herbie Hancock’s I Have A Dream doesn’t quite have the

warm sumptuous feel it normally delivers, and the flugelhorn is just a little too lively and shiny for my taste. Happily though, thanks to its immense sensitivity, many jazz fans will be using super-sweet tube amplification, which will better complement the Klipsch – so this won’t be so much of an issue.

One of my favourite loudspeakers currently on sale, Klipsch’s La Scala AL5 is a mighty design that sounds like few others available and makes music absolutely captivating to listen to in the process. Although huge and heavy, it’s not actually the company’s flagship – that accolade goes to the Heritage Klipschorn AK6 – but is a far more practical proposition for anyone in terms of space. It’s far from perfect – as are all speakers – but it has a unique charm and an enthusiasm for music that’s hard not to love. Match carefully to a smooth sounding source and amplifier, and you’re close to hi-fi nirvana