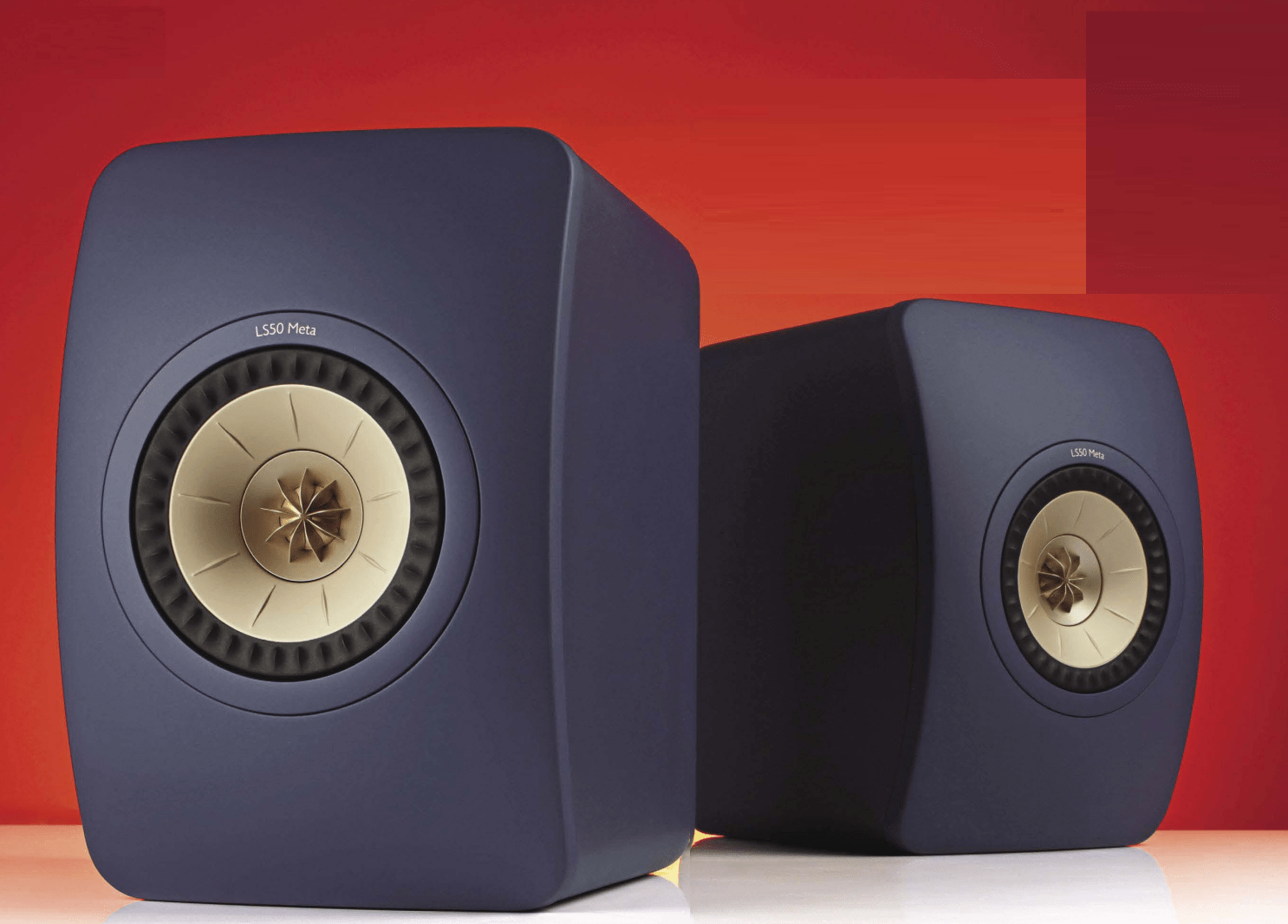 KEF’s Uni-Q driver array has been the centrepiece of the LS50 for ten years, the original model first appearing in 2011. I had the privilege of hear­ing the Uni-Q driver system slightly earlier than that – when it featured in KEF’s Concept Blade loudspeaker, launched at the Bristol Hi-Fi Show in 2010. I didn’t book myself in for the show demo – never an ideal listening environment – as I knew they would later be heading to the show organiser’s acoustically tailored listening room and an invitation would be forthcoming. Attached to top-of-the-range Naim electronics, 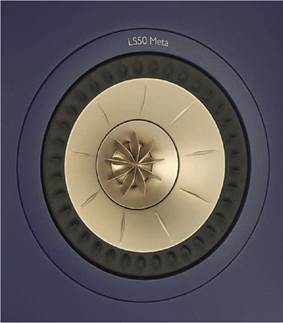 The 12th generation Uni-Q unit now incorporates MAT technology to absorb 99% of unwanted sound from the rear of the tweeter.

they produced a full-range yet utterly focused sound that remains one of my all-time favourite listening experi­ences; I’ll never forget it.

When the first LS50s became available I made it my business to hear a pair and shortly thereafter recommended them to a friend who still uses them with no intention of changing.

The new LS50 Meta shares the visual style of the older model but there have been many significant improvements, not least in the Uni-Q driver array, now in its 12th generation. The word Meta is important here. One definition of Meta is ‘referring to itself or to the conventions of its genre; self- referential’, which makes perfect sense when you look at the lineage of this new loudspeaker, however that’s not the reason for its appendage here.

Metamaterial Absorption Technology (MAT) is the main improvement in the Uni-Q design and is a joint development with the Acoustic Metamaterials Group. I could provide a lengthy explanation of this technology but it would make your eyes water. I’ll leave it to KEF to give the concise report: “Metamaterials are specially developed structures that use existing materials in such a way that they exhibit new, desirable properties that are simply not found in naturally occurring substances”. All clear? In practice, MAT works by absorbing 99% of the unwanted sound produced at the rear of the tweeter, reducing distortion to vanishingly low levels, for a cleaner and more accurate sound.

Other improvements are evident in both the cabinet and the rear­firing flexible port, making use of state-of-the-art technologies, three of which also boast their own 3-letter acronyms.

“A superb example of point source performance, a master-class in coherence, articulation and focus.”

Technical innovations aside, the LS50 Meta remains a 2-way bookshelf loudspeaker inspired by the legendary BBC LS3/5a monitor. KEF produced the drivers for that classic design but that’s where comparisons end. Most LS3/5a wannabes follow its conventional design principles – separate woofer and tweeter housed in a traditionally styled infinite baffle (sealed box) cabinet. The Meta is no ordinary foursquare box design; its curved dimensions are not only sleek 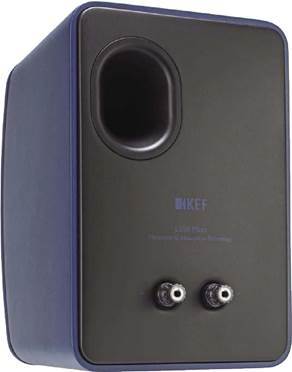 The flare and profile of the offset port is calculated to delay the onset of turbulence and the flexible port walls prevent resonances from colouring the midrange.

Available in four silky matte finishes; black, grey, white and the Royal Blue Special Edition of our review samples, the LS50 Meta sports a contemporary modern look quite unlike wooden BBC-type designs. Those who find the form and finish of the LS3/5a to be dull or even dowdy will appreciate the more

high-tech visual appeal. They certainly look cool in blue with champagne­coloured Uni-Q drivers, though my friend’s original black and copper LS50s have earned themselves a 2- word nickname from me too rude to print here. Let’s just say they remind me of the rear view of one of our feline friends with its tail raised.

Dedicated stands are available but not supplied for review so the LS50s replaced my LS3/5as atop Target stands, 7-inches from a rear

wall and toed-in just enough for the cabinet’s inner surface to be visible.

Out And In from The Moody Blues’ To Our Children’s Children’s Children (Threshold 1969) is a lovely Decca studio recording with a surprisingly modern sounding stereo mix – no wacky hole-in-the-middle 60s stereo here. Through the LS50s, the track was masterfully delineated in perfect proportion, presenting a wide and deep soundstage that betters the LS3/5a’s imaging capabilities by some degree. Filigree detail was revelatory, allowing me to hear a strummed acoustic guitar usually buried beneath a sea of Mellotron, while tonal balance was spot-on. Bass, aided by near rear wall placement, was deep and expressive yet also fast and fluid with no boom or audible overhang. Midrange clarity was outstanding too, with no discon­certing honks or artifice of any kind, while integration of bass, middle and upper frequencies was seamless; a brilliant performance.

Laura Marling’s Alexandra from her 2020 album Song For Our Daughter (Partisan Records) is a recording in the style of singer/ songwriters from the Moodies’ era (think Joni Mitchell) but with a modern, up-front production style. Here, the LS50’s impeccable timing and control was on display, with no smearing of the leading edges of acoustic guitar and percussion. This wasn’t at the expense of body and soul as these speakers can play a tune and cut a rug with the best of them.

Playing some forward thinking (for 1959) jazz courtesy of Ornette Coleman’s The Shape Of Jazz To Come (Atlantic 1959) confirmed the LS50’s ability to faithfully replay acoustic music convincingly. I welcomed some honk in the midrange listening to this LP; that’s how the recording should sound. Smooth as they are, the LS50s do not smooth over tone or dynamics present in the original recording.

For my money the new LS50 Meta is the best small speaker currently available at the £ price point. They are playing as I write and the LS3/5a pair shall remain silent until it’s time for them to go. A superb example of point source performance, they offer a master­class in coherence, articulation and focus. That’s not a keyhole surgery, small-scale type of focus though, as they effortlessly fill a (smallish) room with a wonderfully all-of-a-piece sound. The best just got better.

I listened to the LS50 Meta’s and was immediately drawn to fabulous filigree detailing in the treble; the benefit of Meta technology is quite obvious. As measurement suggests they do not have a warm sound, but are lively and vivacious in modern fashion, spectacularly clean and revealing. Impressive, especially at the price.

Our frequency response analysis of KEF’s LS50 Meta clearly shows this is a very well engineered loudspeaker, running almost academically flat from 80Hz to 16kHz. The lack of peaks and dips indicates low level of narrow band mechanical/acoustical resonances, so low colouration. That makes the LS50 Meta technically a very accurate reproducer. There is some slight lift around the 4kHz-5kHz region, enough to ensure a sound on the bright rather than dark side, but with strong delivery of detail. A modern forward sound balance rather than a traditional one.

The port output (red trace) is tuned to 50Hz, extending output down to 40Hz, so deep bass is possible. The forward response has been proportioned for near wall use, rolling down below 80Hz to lessen the effect of room resonances (room boom). The KEFs are for small to medium sized rooms, no larger than 16ft long or so. They are not bass heavy our analysis show.

Sensitivity was as expected at 84dB sound pressure level from one nominal Watt (2.8V) of input; a 100 Watt amplifier would be best. As a load the LS50 Metas measured 6 Ohms with

The LS50 Meta is very accurate in tonal balance, but it will come across as bright. Smoothness at high frequencies suggests quality treble. NK 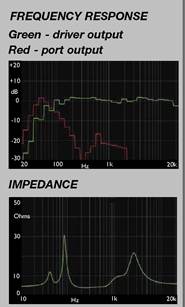 Superb sound far beyond their size and price.