July 10, 2021 1491 0
OUR VERDICT
Articulate and expressive with a tonal balance darker than most. Unforgiving of poor recordings.
SCORES 8/10
TODAY'S BEST DEALS 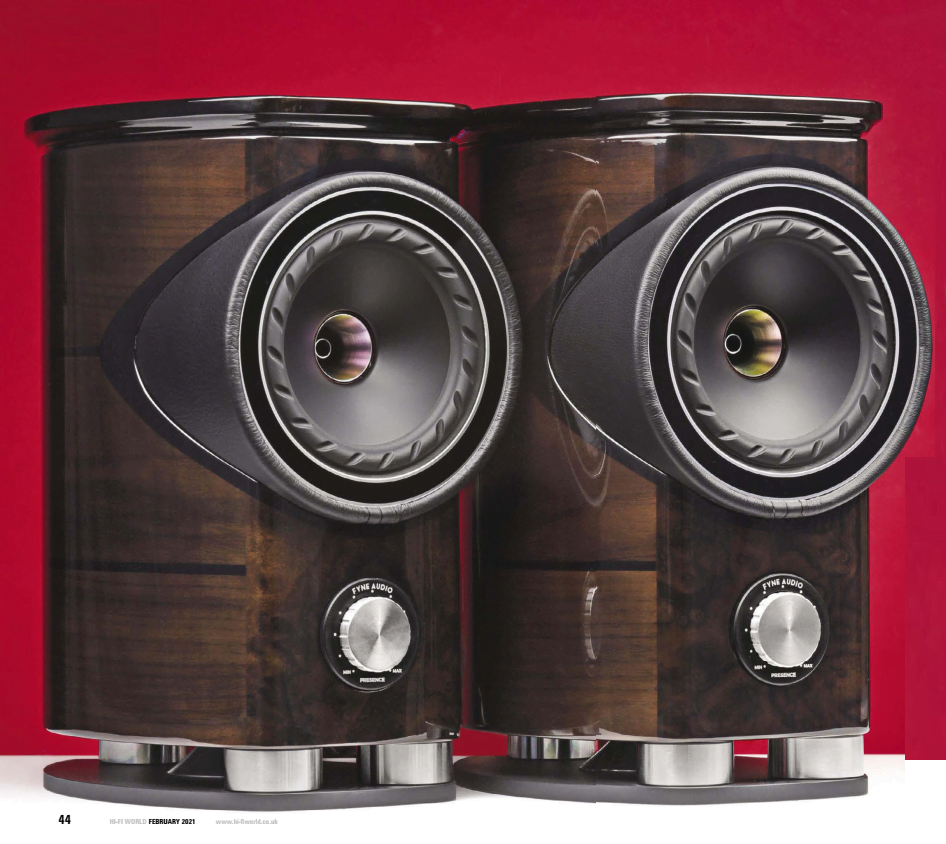 It’s hard to look at these com­pact speakers and not think ‘tiny Tannoy’. You wouldn’t be too far from the truth if you did, because Fyne Audio is a company founded in 2017 by ex-Tannoy employees.

The company offers several ranges with the F1 series sitting at the top of the tree, which means the F1-5s are expensive; a penny shy of three grand to be precise. Still, that’s a snip compared to the two floorstanders that complete the range and cost circa £ and £ respectively. They are beautifully finished in Piano Gloss Walnut, giving them an antique appearance that belies the

The tweeter features a rigid titanium diaphragm and fires from the centre of the multi-fibre paper cone woofer to provide point-source sound.

modern hi-tech componentry inside the box. All inductors, resistors and capacitors are premium grade items, while the Neotech internal wiring attaches to WBT Nextgen gold plated terminals. There is a third terminal that grounds

“I was able to appreciate their strengths, such as their extremely articulate sound.”

the driver chassis to prevent RF interference, an uncommon feature, which I found unnecessary in my system.

The most obvious Tannoy-like feature is the IsoFlare drivers, which look and perform along the same lines as the classic Dual Concentric drivers Tannoy

produced. Rather than having two or more drivers situated on the front baffle, like most conventional loudspeakers, the IsoFlare’s ‘high frequency unit’ – tweeter to you and me – fires from the centre of the mid/bass driver (woofer) to create a point source. I’ve always liked this type of design for its excellent phase coherence and focus, hence the huge I 5- inch Dual Concentric Tannoys I regularly use.

Unlike those big Berkeleys, the FI-5’s IsoFlare drivers do not make use of a protective dust cap covering the HF unit, as it’s naked for all to see. There is plenty of high technology on board though, such as the tweeters’ titanium diaphragm, Neodymium magnet with vented rear chamber and edge-wound aluminium voice coil.

The multi-fibre paper mid/bass section of the IsoFlare unit features the company’s proprietary FyneFlute surround, designed to terminate cone energy and reduce colouration, while the whole unit is built into a cast aluminium chassis and coupled to the cabinet’s internal bracing spars.

More proprietary technology – well, patent pending anyway – is evident with the Speakers’ BassTrax Tractrix low- frequency diffuser system, which features “a twin cavity cabinet design with a tuned waveguide port firing downwards from the reinforced lower panel of the cabinet”. Phew! And did I mention that the crossover is Deep Cryogenically Treated (frozen)?

No wonder this compact bookshelf design is so costly then; the machined aluminium plinth attached to the ‘heavily braced’ cabinet must be another high-cost component.

First impressions were a bit discon­certing as the speakers have a noticeable mid-forward balance. No one could reasonably expect the sort of bass weight and depth you get from a larger cone yet I was quite impressed by their low-end quality, so no problem there. No, my initial concern was the lack of top-end sparkle, giving the F1-5s an obviously dark tonal character. As I had previously been listening to the brighter-balanced KEF LS50s, I switched back to my LS3/5a monitors to get my bearings, so to speak.

Once accustomed to the Fynes’ more muted character over a wide range of music, I was able to appreciate their strengths, 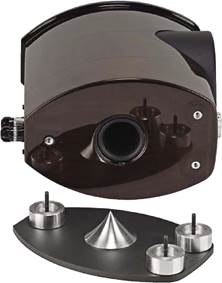 such as their extremely articulate sound. Dynamic expression was also strong and the combination of midrange detail and micro-dynamics made for a startling rendition of familiar material.

Richard Thompson’s guitar work on Fairport Convention’s Who Knows Where The Time Goes was reproduced with all the delicacy I’ve experienced through Quad electrostatic speakers, however Sandy Denny’s vocals sounded a little on the cuppy side, 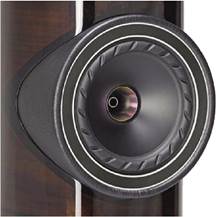 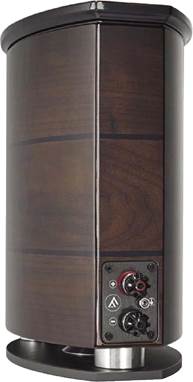 The F1-5’s cabinet has a furniture-standard finish and is attached to a heavyweight machined aluminium plinth. Adjacent to the gold-plated speaker terminals is an earth terminal that grounds the driver chassis to avoid radio frequency interference.

with a tendency towards aggression during louder passages, especially at higher volume levels. I missed the sense of air and space around cymbals and turning up the front panel presence control (+3dB at 2.5kHz – 5kHz) impaired midrange accuracy without adding any useful gloss.

Listening to poorly produced pop music was pointless. However, Dave Holland Quartet’s Conference of the Birds, beautifully recorded for the ECM label, played to the F1- 5s strengths, sounding nimble yet fulsome with a gorgeous bass tone. Imaging was precise and focused, as you might expect from a point source design, if not particularly panoramic.

Jose Feliciano’s version of California Dreamin’ was also successfully reproduced, proving the speakers can replay rhythms as well as deliver delicacy and detail. The smooth string sound coated in a dark reverb suited the F1-5s tonal balance well and, for once, I didn’t miss atmospherics at the highest frequency extremes.

Many potential users will love the immersive insight on offer here with the Fynes sounding convincingly communicative and dynamically expressive. For me, the lack of high frequency extension coupled with a slightly papery midrange character make them too music dependant to be a truly satisfying long-term listen.

Well worth auditioning with your favourite test-tracks but beware of side-by-side comparisons that will show how much brighter the competition is.

In our large room (6550 sq ft) the first thing that hit me from these speak­ers was their glorious Tannoy-like sound staging. I know and love Tannoys and these little things were trying their darndest to be dimensionally impressive in similar fashion. This seems to contradict John’s comments but I suspect room acoustics are the confusing factor here. Otherwise, the bass/mid cones have a well damped (dark) sound but the treble horn is forward, making for incohesion. Super-high treble (the hissy bit) is missing too. I thought “characterful and engaging but could usefully be tweaked for a more svelte result”

Frequency response of the Fyne F1-5 extends reasonably flat from 60Hz to 5kHz our analysis shows (green trace) before slowly rolling down toward 16kHz, with front panel control at central zero. The high frequency roll-down was consistent at all froward positions, being slightly less pronounced off-axis. Symmetrical high frequency horns are smoothest slightly off-axis and our trace shows this. The front panel control introduced +2dB plateau lift from 2kHz to 5kHz, enough to raise midband detail and add in some brightness. Turning the control down made no difference at all, so it adds lift but not cut.

The port is tuned to 55Hz the impedance trace shows by the port imposed dip, and the frequency response shows in the red trace. The width of the red trace of port output suggests good acoustic damping and well controlled bass as a result. The F1-5 reaches down to 60Hz, the port helping extend this down to 40Hz.

A peak in the midband at 1 kHz coincides with a peak in port output (red trace), suggesting a strong internal cabinet resonance at this frequency, likely from the rear panel, causing brightness colouration.

Sensitivity was fair at 84dB sound pressure level from one nominal Watt (2.8V) of input; a 100 Watt amplifier may be best. As a load the F1-5s measured 7 Ohms with pink noise, dropping to a minimum of 4.7 Ohms (dcr). The impedance trace shows this – and that crossover to the tweeter occurs at a very high 6kHz, so it covers little of the audio band; the single bass/ midrange driver does most of the work.

The Fyne F1-5 is reasonably accurate in balance, but has a mid-band peak and lacks upper treble. NK 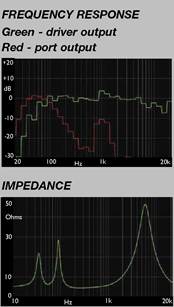 Articulate and expressive with a tonal balance darker than most. Unforgiving of poor recordings.