Here is the big one: Hegel’s top of the tree. The H590 from Hegel Music Systems is not only the biggest integrated amplifier the company has ever produced, it’s the most connected, the most forward-thinking, and – in outright performance terms – probably its best yet. Granted there are a couple of pre/power combinations in the line-up that might have something to say about that (especially the 1,100W H30 mono brutes), but I’m holding to that statement.

The H590 is the synthesis of the best of the latest line of integrated amplifiers (such as the innate flexibility of the Hegel Rost and later designs), coupled with the most up- to-date versions of all the  amplifier technologies Hegel has incorporated into its amplifiers for the longest time. Now mix in the kind of ‘best in show’ components and technology so new it gets its first outing here and you have an unbeatable combination.

The Hegel H590 adds more power to the likes of the Rost, H90, and H190, and it brings more power and connectivity to the H360. With its strangely precise 301W per channel, you could be mistaken for thinking the H590 occupies the top slot of Hegel’s integrated amp line-up simply by virtue of power delivery. If you need a bigger amplifier and the H360 won’t cut it, then the H590 is all you need. While true on the surface, this is too simplistic a reading of the situation. Interestingly, the price of the HD30 flagship DAC from the company and the H360 is not that dissimilar to the full-up H590, and until this model shipped, this was probably the best Hegel set-up you could buy. The H590 effectively obsoletes that combination, as you won’t buy both when the H590 performs this well.

Like the other integrated models in Hegel’s line-up, the H590 features an extensive on-board digital audio section and analogue inputs. Unlike those other integrated models, however, the H590 does not place limits on either in order to fit on the back panel. So, you get a trio of stereo RCA line inputs, and two sets of XLR balanced line inputs (as well as fixed and variable RCA stereo outputs) on the analogue side, and two coaxial (one of which uses BNC), three optical, USB, and Ethernet digital inputs, and even a BNC coaxial output.

That is an exceptionally comprehensive line-up for an integrated amplifier, reflecting the does-it-all nature of the Hegel H590. There are a couple of obvious omissions, however; no phono stage and no headphone socket. The first is perhaps more understandable than the latter, as Hegel has long eschewed turntable as one of its regular sources, preferring instead to allow the end user to specify their own analogue front-end. While those seeking an all-Hegel electronics solution that includes turntable replay might want a standalone phono stage from the brand, the on-board equaliser in an amplifier is now a rarity.

Hegel’s design criteria is reduced to a series of pithy names that aptly describe aspects of the technology, including the localised feedforward amplifier circuit called SoundEngine, DualAmp (which separates out the voltage and current gain stages) and the related DualPower (which provides specific power supply feeds for those separated parts of the amplifier circuit), and finally OrganicSound that requires careful voicing of the amplifier against a known reference of acoustic instruments and vocalists not known for their love of AutoTune. There are a similar group of names for the digital audio side of things, including SynchroDAC (synchronised – as opposed to asynchronous – upsampling) that goes with the company’s LineDriver technology (high- frequency filtration), a similarly synchronous USB technology, all controlled by pico-second accurate MasterClock. All of the technologies underlying these names have been improved in the process of developing the H590, and you can hear this.

Stepping out of HegelWorld for the moment, the nuts and bolts of the H590 are extremely impressive. That power amplifier stage delivers its 301Watts in Class AB, but it’s a high-bias Class AB making it run in Class A for longer. The power amp’s output is achieved by using 12 output devices 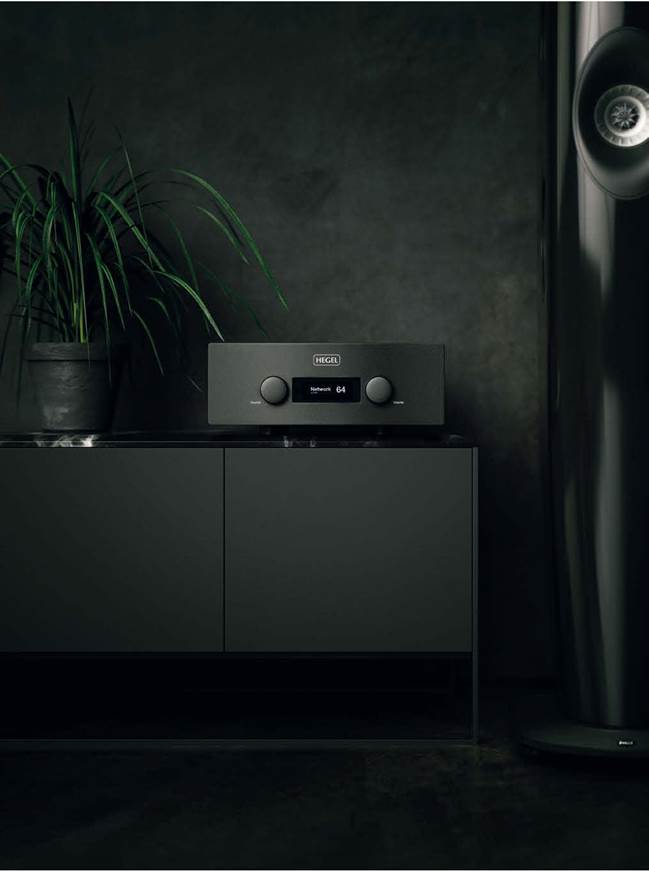 ► per channel, and a huge power supply transformer (which accounts for the height of the amp). On the digital side, this is the first domestic product in the audio world to sport the latest AKM chipset and this meant a lot of coding performed by Hegel’s team itself. The benefit of this is it brings the second- generation of MQA processing to the table, alongside PCM to 32-bit /384kHz and DSD 256 (on USB).

The coding part is really clever, because it allows the user to very simply utilise Tidal’s services and leverage MQA extremely easily. It allows true second-generation MQA unfold internally, which means you tell Tidal (via your phone or tablet) to send an authenticated MQA file direct from a router to full decode inside the H590, with no intermediary unpacks or handshakes. Making Hegel’s H590 the Steve Austin/Six Million Dollar Man version of MQA decoding: better, stronger, faster (although without the Bionic Eye and Power Arm).

Setting up the digital side is extremely easy now. The amp has its own Network Configuration page and if connected to a wired router, press and hold a button a couple of times and up pops the name and IP address of the H590. Type that into a browser on a computer and you can update firmware, reassign the name and IP address for a more complex multiroom system, or play dating agency between the H590 (acting as media renderer) and a UPnP/DNLA compatible media player. Similarly it’s easy to hook the H590 to AirPlay or Spotify Connect by adding an Ethernet cable to the appropriate wireless router. Both AirPlay and Spotify ‘see’ the H590 as a compatible/available device, and you simply connect your iDevice or similar to the H590 and away you play. This is one of those installation concerns that is more complex to describe in detail than it is to do in reality (rather like making toast – imagine describing the process in minute detail and it appears mindbendingly difficult).

I have a bit of a problem with ‘flagships’. Sometimes, they have an alarming habit of going for the impressive so much that they undermine what was so good about the more attainably-priced models. It’s a belt-and-braces approach that makes for a bigger amplifier, but not necessarily a better one. It’s a problem in reverse, too; the company that started out at the top of Mount Olympus often fails to make the less expensive models live up to expectation. So, there was a bit of a concern that Hegel might go a bit ‘flashy’ in making The Big One.

I needn’t have worried. Given its northerly latitude (shared with Disenchantment Bay in Alaska), it’s probably not that difficult to retain a cool head in Oslo, and cooler intellects than mine made the H590 retain the advantages of the smaller Hegels, with just the right amount of extra heft and all-important resolution to more than justify its position at the head of the family. Just give it an hour to warm through.

There are a few electronics companies that gain a lot of support and followers among loudspeaker designers because these brand’s amplifiers ‘do no wrong’; in other words, they make a great neutral platform for the loudspeaker designer to weave their own product, and a perfect demonstration product for the company to showcase their new loudspeakers, knowing the amplifier will handle everything thrown at it. These are ‘…just add loudspeakers!’ designs that dealers love, too. Hegel is one such company and the H590 extends that ‘…just add loudspeakers!’ ethos to some very demanding partners and spaces. From the perspective of an audio reviewer, there is nothing better than an amplifier that I know will satisfy the majority of prospective buyers regardless of their tastes in music, the loudspeakers they currently use, or the loudspeakers they might intend to buy next time round. And, while Hegel gets demonstrated a lot of the time with Nordost

$143.99
Added to wishlistRemoved from wishlist 0

£499.00
Added to wishlistRemoved from wishlist 0