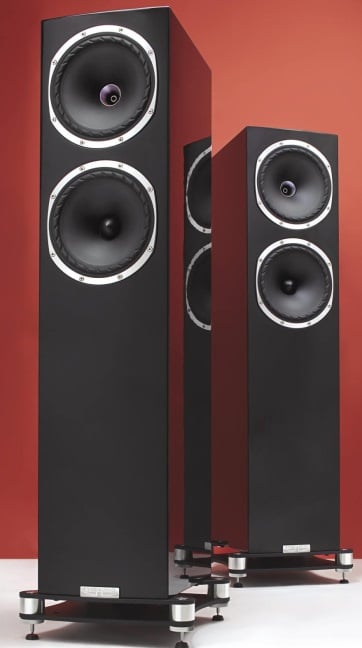 We expect big bass from big loudspeakers – and you get both here! Fyne Audio (Scotland, so as in Loch Fyne) build ‘em big and strong, the F502SP I am reviewing here standing 1110mm tall – a tad higher than most. The company being formed from ex-Tannoy personnel, you can expect similarities with Tannoys of the past, this loud-speaker having a large bass/midrange unit with treble unit placed at centre, firing out through a small horn, for point-source dispersion that gives stable and concise imaging. This is a loudspeaker with presence.

Let us talk bass, since it forms a weighty part of this ‘speakers design essence and sonic character. The fibreboard cabinet, braced for rigidity, has a “conical Tractrix profile bass diffuser” we are told, that fires downward to a port on the bottom panel – think downward firing cone. Like all loudspeakers with downward firing ports the F502SP has a plinth that lifts it off the floor, in this case a substantial one of cast aluminium with adjustable spikes, twiddled by a supplied tool. ‘Tractrix’ refers to a horn profile developed long ago as optimal by Paul Voight and we described it in our Nov 94 DIY Supplement; Wikipedia has a very interesting explanation with animated diagrams. Klipsch also like to mention use of the Tractrix profile, so it well respected.

Fyne Audio are saying then that they use this optimum profile for bass port that loads the lower 200m drive unit.

Above the bass unit lies their 200mm Isoflare concentric drive unit with magnesium dome treble unit at centre, firing out through a short horn. The treble unit plays a strong role in the F502SP I found, coming in at 1.7kHz Fyne say – and our measurements show the ‘speaker is forward at this frequency and above, making for strong projection of detail. Think vivid vocals.

Our pictures show the F502SPs are well finished and at rear have sturdy gold plated bi-wire terminals with removable straps that, in place, allow mono-wiring. The plinth 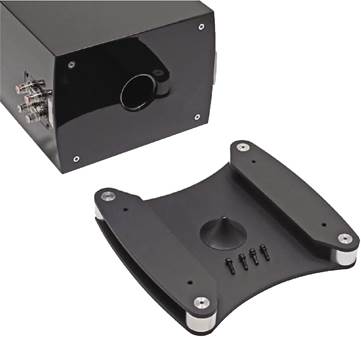 The downward firing bass port with a diffuser on the plinth that contributes to Tractrix behaviour.

Counter-intuitively, large loudspeakers need less power than small ones. The Fynes are massively sensitive, needing just 20 Watts or so to go very loud. A 40 Watt amplifier would be more than enough for most rooms and listeners.

The F502SPs proved to be charismatic loudspeakers. I first drove them from Audio Analogue’s Puccini Anniversary amplifier and got more than expected. There was great clarity and stage depth, plus massive opening plucked bass in Loreena McKennitt’s Gates of Istanbul (CD). But with Willy DeVille’s Spanish Harlem the brightly projective midband of the F502SPs moved into edginess as Willy DeVille spat the word “Spanish” into the microphone –  not something I recall hearing before from this uncompressed CD track I often use for sound quality assessment. Pondering this I realised that I was hearing distortion from the Puccini Anniversary, being emphasised by the loudspeaker’s horn loaded tweeter: so, two culprits as it were.

I moved on to our trusty Creek Evolution 100A for a softer sound – and that is what I got. Gone was some of the Puccini Anniversary’s glorious clarity and detailing, but retained was massive bass, on Gates of Istanbul in particular – but without treble edginess. Bass quality was fulsome rather than tight.

Not entirely happy about this either, I hooked up our Icon Audio Stereo 30SE single-ended valve amplifier and this largely sorted out the unusual and obvious issues I had bumped into. Back came glorious clarity and stage depth – and now Willy DeVille could spit the word “Spanish” into the microphone and get away with it. Bass quality changed completely and largely for the better, becoming lighter but more fluid and communicative. And to explain this

I need to get a tad technical.

The F502SPs draw heavy current from a transistor amplifier at low frequencies (very low impedance), fully driving the bass unit. The Stereo 30SE, even on 4 Ohm tap, could not deliver as much, so the deep rumbling I heard with the Audio Analogue and Creek was missing – for the better I felt.

There’s a lot to say about all this. First is that the forward and highly projective sound of the F502SPs emphasises and projects problems from elsewhere, making them engaging but overly critical. Willy DeVille at the microphone was powerfully delivered by the Puccini Anniversary amplifier – I enjoyed that bit – but I did 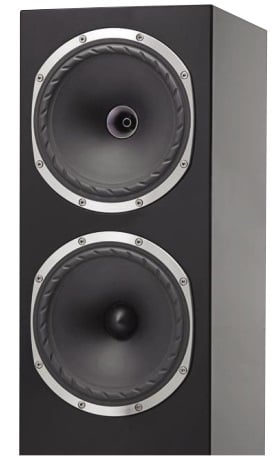 The Iso flare drive unit (top) has a tweeter at centre, so is two drivers in one. Below sits a bass unit.

not enjoy hearing its distortion harmonics.

Most potential listeners will not be using such an amplifier and here our Creek Evolution 100A brought everyday balance to the issue. Think massive rolling bass and forceful midband projection but without edginess – but these ‘speakers will still jump out in a showroom demo. The tweeter is fast but quite hard in rendition, made obvious by its enhanced contribution to proceedings.

Massive sensitivity suits low power amplifiers and our Icon Audio Stereo 30SE had no trouble driving the F502SPs, in particular showing they resolve detail and stage depth superbly – even dramatically. It made the point that this loudspeaker is amplifier critical and needs a great source. Bass wise, the Stereo30 SE reduced low- end rumbling, improving temporal resolution. I felt it got it right, but this will not be the everyday experience; most people use transistor amplifiers after all.

After running through amplifier options to find out how the F502SPs interface, I stayed with Creek’s Evolution I00A to hear what most listeners would hear. With Classical and Nigel Kennedy playing Vivaldi’s Spring (CD) his violin was brightly lit and forward, strings sounding a tad metallic. Since violin strings can be metallic this may have been correct, the F502SP making this obvious through deeper insight into Nigel’s

these ‘speakers will jump out in a showroom demo

Stradivarius and his string choice, helped by raised midband output. It’s impossible to be certain. Whatever, Mr Kennedy’s violin was certainly prominent and vivid here, given different treatment to the XStat electrostatic panels of our Martin Logan ESL-X reference loudspeakers that offer a smoother rendition.

Orchestral scale wasn’t in doubt, the London Symphony Orchestra playing Mars, from The Planets, filling our room with a thunderous performance. Strings were forward and sheeny, but well delineated, solo horn and backing trumpets given a firm and obvious presence. Backing timpani had great weight, laying down a thunderous presence, in keeping with the spirit of the piece.

As with Rock, singers like Renee Fleming were forward on the stage, with clear but sharp presence.

Summarising, the F502SPs have strong bass able to move any room; they are for larger rooms rather than small ones, meaning less than 16ft long as a rough guide. They are also mid-band forward, projecting vocals with force. Putting these traits together the speakers deliver a sound with massive power and presence, beyond most else.

Fyne Audio’s F502SPs are a vivid listening experience. Massive bass and a fast, forward midband make for a sound few other loudspeakers come close to. More charismatic than smooth they offer an alternative to the commonplace. Being very revealing though, as well as demanding, they do need careful amplifier matching.

Our analysis of frequency response (green trace) shows a peculiar dip around 250Hz, likely due to the use of a slow first order high pass filter feeding the upper Isoflare 200mm point source driver. Below 250Hz the lower bass unit takes effect, lifting output back up quite strongly to a peak at 60Hz before a slow roll down to 30Hz. 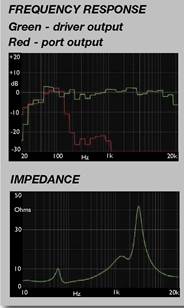 The downward firing port (red trace) is tuned high to 100Hz, providing some fill-in in this region it appears. The ‘speaker has very strong bass, but weaker upper bass, divorcing one from another.

The upper midrange is very strong around 4kHz which will add some bite to the sound. Higher treble rolls down slowly. Our response shows grille on, but removing the grille made little difference. Needless to say the ‘speaker, being a point-source, has good lateral and vertical dispersion so will give a consistent sound whether seated, standing, walking around.

Sensitivity was high, 91dB sound pressure level (SPL) from one nominal Watt of input (2.84V), so amplifiers of 20 Watts or more will be enough to go very loud. With a low overall impedance of 5 Ohms, measured with pink noise, and a very low DCR of 2.5 Ohms the F502SP draws current and needs a sturdy amplifier, or a valve amplifier set to 4 Ohms.

There may be slight lack of lower midband warmth with the F502SP but bass will be strong and the midband forward.

A big, detailed sound, but forward and a bit hard.