ELIPSON PRESTIGE FACET 7.2.4 Review: Audio all around you

You may not be that familiar with French audio brand Elipson, but you’ll certainly recognise its most famous speaker. The company’s spherical Planets are iconic, if slightly bonkers, but Elipson also makes traditionally shaped speakers, and that includes its Prestige range. 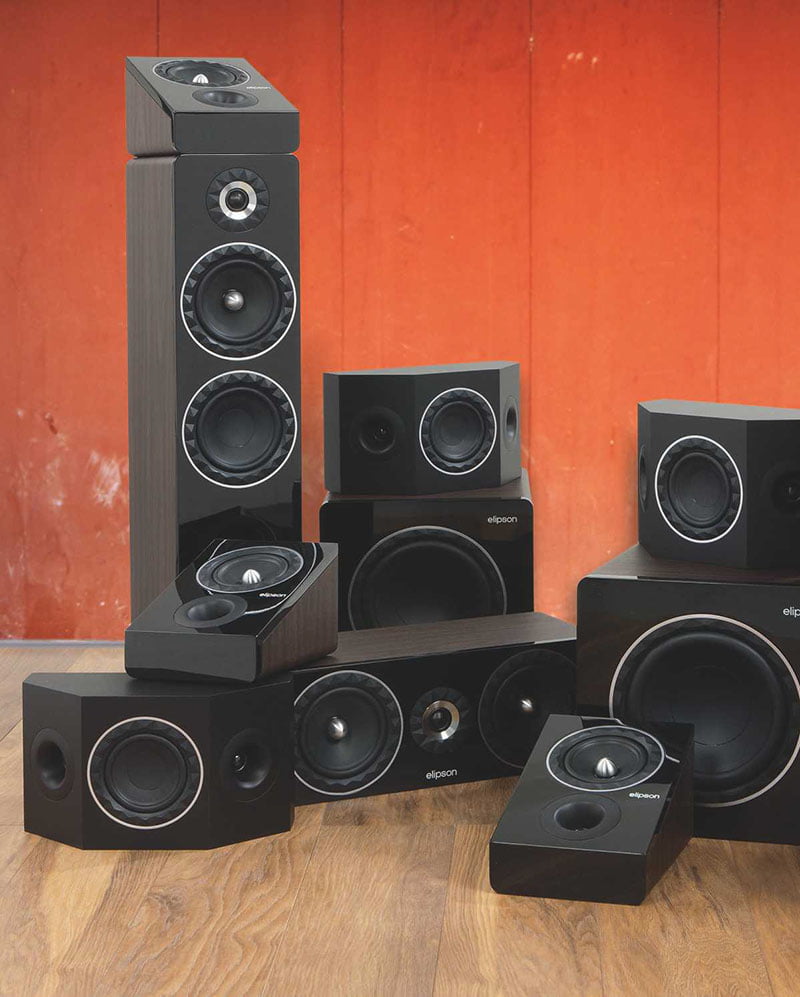 Position: One of Elipson’s more traditional ranges, next to the in-wall/on-wall Infinite series

The original Prestige models launched in the 1970s, with the aim of audio fidelity and sonic neutrality. Yet Elipson eventually felt there was room for improvement, and in 2016 it revamped the entire range, overhauling the design to include a reinforced cabinet, double-layered fronts, tweaked crossover filters, and dual binding posts.

Central to this new Prestige design are the sculpted facet silicone rings surrounding each tweeter and mid/bass driver. These look like cut diamonds and are designed to reduce baffle-borne diffractions, resulting in a smoother listening experience.

This aspect of the design is not only visually distinctive, but important enough to inform the range’s name: Prestige Facet.

The facet rings really stand out, while the curved cabinet edges and meticulous lacquered finish ooze class. There’s a choice of three colours – black, white, and a more traditional black/walnut (pictured), and if the facet design isn’t to your tastes, you can cover the drivers with black magnetic grilles.

Prestige Facet is composed of floorstanders and compact models, along with subwoofers and specialist home cinema speakers. Although each model is available separately, Elipson also offers various packages, one of which is auditioned here: a full monty 7.2.4-channel system.

The main speakers are the 14F 2.5-way floorstanders, which are equipped with a 1in soft dome tweeter, a 6.5in woofer, and a 6.5in midbass driver. The latter is fitted with a bullet-shaped phase plug intended to limit vibrations, and all drivers are surrounded by the multifaceted silicone rings. For this speaker Elipson claims an impressive low-frequency response of 38Hz.

1. The system uses Atmos up firers and dipole surrounds

At the back you’ll find dual silver-plated speaker terminals, which offer the possibility of bi-wiring and bi-amping. The speaker is extremely solid, weighing a hefty 20.5kg, and sits on a removable plinth with the option of rubber feet or spikes.

The 14C centre channel model largely mimics the 14F, with multifaceted rings, a 1in tweeter and brace of 6.5in midbass units. The claimed low-end extension is a decent 43Hz, and the use of the same tweeters and drivers should result in a uniform performance across the front three channels. The 14C sits on a similar plinth stand.

The four 7SR surround speakers retain many of the features found on the other models, but use a dipole design with a 5.5in midbass driver mounted in the middle, and out-of-phase 1in tweeters on either side. This results in a dispersed surround soundfield, but low-frequency response rises to a claimed 65Hz. The 7SR is designed to be wall mounted, and unlike the other speakers is only available in black.

The included quartet of 6 ATM upward-firing speakers were developed in conjunction with Dolby for use with Atmos, The 5.5in midbass driver and 1in tweeter aim at a 15-degree angle toward your ceiling, reflecting back to the listener. The speakers retain many of the other features found in the rest of the range, and have the same low-end extension as the surrounds.

Finally this system uses a pair of Elipson’s SUB10 forward-firing subwoofers. As the name suggests, they use 10in drivers (married to down-facing bass reflex ports) along with Class D amps claiming 250W of power. The rear panels are uncluttered, but an LFE input, level, phase and crossover controls are all a user is likely to need. The sub sits on a removable plinth, and while the build quality is very good, the supporting silver columns look a bit tacky.

Since the 7SRs are dipoles, you need to position them correctly in order to get the desired effect. Elipson recommends a height of 60cm above the sweet spot and thankfully each speaker is marked Surround Left and Surround Back Right or Surround Right and Surround Back Left, making installation simple.

The Atmos modules also require some careful positioning to create the illusion of overhead audio. That means you need a fairly low, flat and reflective ceiling for

the best results, and for the desired effect you place two speakers at the front and two at the rear.

The locations of the front positions are fairly obvious; you just put them on the 14F floorstanders and they pair up quite nicely. For the rear I’d recommend putting them over the two surround back speakers, but they don’t really fit atop the 7SR. This means you’ll either need to use a shelf or do what I did and resort to Blu-Tack, which isn’t the most attractive solution.

From the perspective of mounting the Atmos speakers, the Prestige Facet 8B standmount (not tested here) might be a better choice for the surround back channels.

If Elipson really wants you to use dipoles at the rear, then I’d suggest a new model with built-in upward-firing drivers.

The sensitivity/impedance figures suggest these speakers won’t be a difficult load for the current crop of 11-channel AV receivers. My reference Arcam AVR850 and P429 combo certainly had no trouble, with its Class G amplification delivering plenty of oomph.

So, how did the system sound? In a word: amazing. I have always advocated a full 7.2.4 system for those wanting a truly immersive experience and the Prestige Facet package does exactly that.

Despite being delivered via Dolby Digital Plus, the Atmos soundtrack on Iron Fist (Netflix) sounds stunning. The first episode of Season Two ends with a scene of Danny Rand practicing his martial arts, and it’s the perfect example of the creative use of object-based audio to enhance the visuals.

Danny’s down in a basement and you can hear subway trains rumbling overhead thanks to the upward-firing drivers. The dipole surrounds ensure his breathing echoes around the room, and the front three speakers pick out the higher frequencies as the metal door he’s punching buckles. The impacts of his glowing iron fist are given greater weight as the punchy subs fill the room with bass energy.

Ready Player One (4K Blu-ray) has become a favourite test disc and has an incredibly frenetic Dolby Atmos soundtrack, designed by the legendary Gary Rydstrom.

It’s an immersive mix, especially when the action moves to the virtual world of the Oasis.

Elipson’s 7.2.4 speaker configuration takes full advantage of this track. During the opening race sequence, cars and other vehicles seamlessly move from front to rear, demonstrating the excellent tonal balance of the system.

At one point Parzival is driving under the race track, facilitating plenty of overhead effects that the Elipsons deliver with real precision.

The race ends with the arrival of King Kong (it’s that sort of movie…), and the combination of the tangible low-end of the front floorstanders and the excellent bass extension of the subwoofers makes sure the venerable ape’s presence is well and truly felt.

The system takes the dynamic swells in the soundmix in its stride. It also copes with the multiple layers of effects; the inherent fidelity and neutrality of the speakers ensuring every carefully positioned sound and object is perfectly delivered, allowing me to pick each one out with genuine clarity.

There’s a scene towards the end of the film where a bomb called the Cataclyst is detonated and there’s a massive sonic shockwave that moves from the front of the room to the rear like a tsunami of sound. I’m pretty sure every speaker was energised at this point, and the system as a whole seemed in unison, with the subs plumbing the depths of their claimed bass extension.

The Atmos units might have been co-developed with Dolby, but they work just as well with DTS:X. The fortuitous arrival of Jurassic World: Fallen Kingdom on 4K Blu-ray (US import) gave me the chance to put this system through its paces. There’s nothing like a dinosaur movie to get the audio juices flowing.

The jungle sequences prove great for testing the Elipson system’s ability to create a believable sense of location.

All those carefully designed Foley effects are intended to immerse you in an environment, and this 7.2.4 array was so successful at replicating them that I started to sweat and swat mosquitoes.

That same sense of realism also applies to later scenes that take place in a mansion being pummelled by a suitably horrific storm. Thunder cracks overhead and dinosaurs tear their way through the walls and across the roof. The localisation of effects is again precise and dialogue is well defined.

A scene where Chris Pratt’s character is stuck in a trailer with a T-Rex gives the twin subwoofers another chance to shine. They deliver real weight to the dino, to the point where you can feel each breath. Then, as the beast attacks, its jaws snap shut in the middle of the room, causing me to duck.

Possibly the standout scene concerns the eruption of a volcano, which feels terrifyingly ferocious. This system crafts an abundance of subsonic energy as pyroclastic clouds tear through the room and lava rains down on me. Yet the over-the-top nature of the scene notwithstanding, the sounds never feel overblown and the speakers are always in control. The plaintive cries of dinosaurs trying to escape are carefully positioned within three-dimensional space, despite the cacophony of effects that abound within the mix.

Elipson’s Prestige Facet range offers plenty for system builders, and a sound that’s rich in fidelity and neutrality. The clean and thoroughly modern appearance is a major plus point, while the build quality and finish is exceptional. Most importantly, this 7.2.4 package is about as immersive as you can get, with a dynamic and forceful performance that’s sure to please. The fact you can get all of this for just three-and-a-half grand makes it a bit of a bargain

This beautifully made and cleverly designed speaker package is not only great value but fully immerses you in a way that few other systems can.

Considering it packs 11 amplifier channels, this Denon receiver is well priced at just £1,400. Handles Atmos, DTS:X and even Auro-3D mixes, and boasts a detailed, quick-footed and articulate sound.