First impressions were good: with the two 120mm fans attached to the radiator, it’s only 52mm thick, which meant we had no issue slipping the assembled unit into the top of our PC case, even with high-profile RAM sticks in the way. The box includes almost everything you need, including a tube of thermal paste and a universal mount that permits the cooler to be used with a wide range of Intel and AMD sockets. 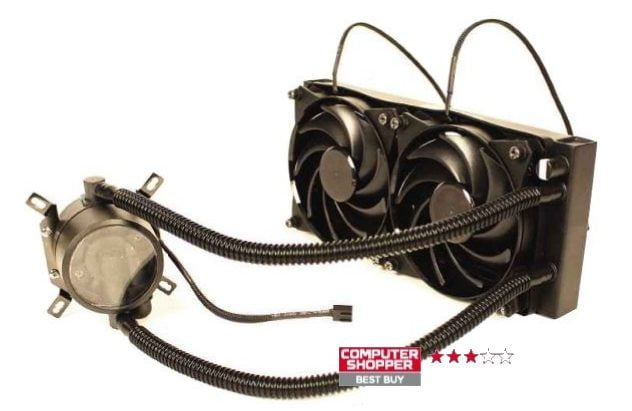 Sadly, there are a few quirks which made this one of the fiddlier AIO cooler installs we’ve performed. For instance, the fans and radiator are separated by a rubber gasket -this sounds good as it has the potential to reduce vibration sound, but it doesn’t actually wrap around the fans that tightly, only forming a strong seal around the corners. That means you’ll spend time wrangling the wobbly gasket into position for the reward of only very minor dampening.

Even worse is the mounting bracket, especially if you have an Intel socket motherboard. It works by having four bolts poking through holes on the end of the bracket’s arms, which are then pushed through from the rear of the board, allowing the water block to attach to the other side with four nuts.

The tricky part comes from actually ensuring that the bolts are held in place on the bracket in the first place; this is done by sliding a plastic clip over both the end of the arm and the top of the bolt, but most Intel sockets require the bolt to be held precisely in the middle of an elongated hole, so pushing on the clip can in turn force the bolt out of place. It’s very tricky to remove the clip and try again, too.

Owners of Intel LGA2011 and LGA2011-v3 motherboards, however, can skip this inconvenience, as the water block can screw directly into the motherboard itself.

We’re also not too keen on the bundled thermal paste, which was so thick and viscous that it just stuck to the piece of card we were using to spread it. In the end we just gave up and used a different paste instead.

If all that sounds like the MasterLiquid Pro 240 is some kind of nightmare to set up, rest assured that it isn’t, on the whole. Everything is doable with your own two hands and a couple of screwdrivers, and there are some particularly user-friendly additions, such as a splitter cable that allows both fans to draw power from a single motherboard connector – great if you’ve got a lower-end board.

It also performs well. Paired with an Intel Core i7-4770K running at its stock speed of 3.5GHz, it kept the chip’s four cores at a comfortable 33-39°C when idling, with a peak temperature of 46°C. When running the Metro: Last Light Redux benchmark, it only increased to 45-47°C per core, with a rare peak of 50°C.

For reference, the stock Intel air cooler produced temperatures of 33-37°C (peaking at 44°C) when idling, and 51-55°C (peaking at 61°C) while Metro was running. So, while the MasterLiquid Pro 240 doesn’t produce much benefit when idle, it’s much more frigid than the stock cooler under load. 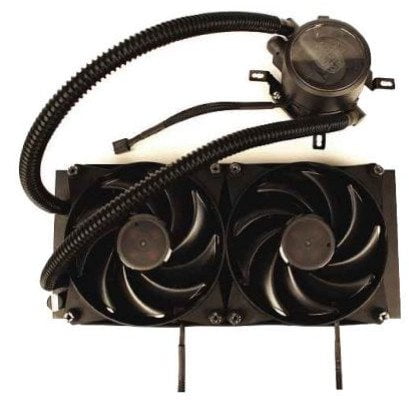 There are a couple of catches, though. For one, this can be a rather loud cooler, but not for the reasons you might expect The fan noise is fine, even when dealing with an overclocked chip on the hottest September day since 19T1, but their spinning created such strong vibrations that our PC case started to rattle Even with all eight mounting screws as tight as they could be, there was the unmistakable whine of metal shaking against metal where the radiator met the top panel, and even the side door shook a little, producing a moderate hum.

To be fair, we were using a completely unpadded NZXT Source 530, which is constructed largely of thin metal; you might have a quieter experience if your case is made of sturdier stuff. Still, we’d rather it wasn’t an issue in the first place, which brings us on to the main issue: the Arctic Liquid Freezer 240 (Shopper 343) is not only devoid of any similar noise problems, but produces lower temperatures and has a slightly easier setup process, all for a more affordable price.

The Arctic Liquid Freezer 240 would therefore be our first choice of 240mm AIO cooler, even if the MasterLiquid Pro 240’s performance goes a long way towards making up for its less agreeable aspects.

It will keep your CPU suitably chilly, but the MasteriJquid Pro 240 has more than a couple of rough edges.

It will keep your CPU suitably chilly, but the MasteriJquid Pro 240 has more than a couple of rough edges.