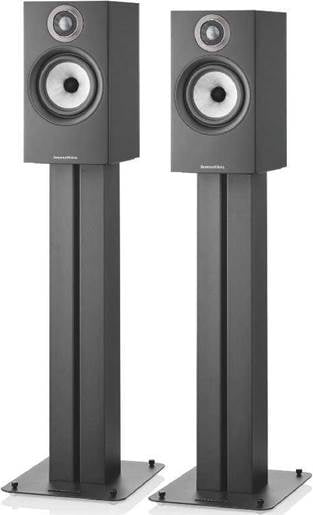 Is it that time already? It feels like I’ve reviewed every generation of Bowers & Wilkins’ entry-level 600 Series speakers across its entire 25 year lifespan. It’s the longest serving B&W range apart from the flagship 800 Series line, and therefore a big deal when it’s changed.

Every time a new one comes along, it’s been better than the last. This is because technology is trickled down from its high-end designs. The original 600 started by borrowing Kevlar mid/ bass drivers from the higher ranges – and in 2018 the sixth-generation 600 Series got the new Continuum cone. Now, this latest range has been given a slew of further revisions, including a new name – the Anniversary Edition.

This is the entry-level standmount, and has a number of improvements over the previous generation. It’s a conventional two-way design with a rear-firing bass reflex port. Most visible are the new finishes; the existing matte white and black are joined by cherry and oak – the former for Asia and the latter for the rest of the world.

The changes brought by this new version are more than skin-deep, though, and centre around subtle tweaks to both drive units that, as we’ll see, amount to more of an improvement in sound than you might think. Starting with the

tweeter, the 607 S2 Anniversary uses its predecessor’s 25mm aluminium dome high-frequency unit, that’s decoupled from the main cabinet. However, the assembly has been revised to improve performance – so B&W says – with an upgraded neodymium magnet from the 700 Series, as well as getting the latter’s attractive grille mesh. Behind this, the dome is repositioned within the diaphragm mounting plate to improve time alignment. The result is a quoted 38kHz first break-up mode for this drive unit – I can’t speak for yours, but that’s comfortably beyond the limits of my hearing.

Moving down, and the Continuum cone – first introduced on the 800 Series Diamond and subsequent 700 Series – appears here in a less expensive form, but still features its main benefits. As far as B&W’s engineers were concerned, this has more gentle and better controlled break-up modes than the Kevlar cone used until recently. Like the latter, the Continuum cone material is a woven composite, but has noticeably more

Its level of musicality, refinement and detail is top notch at this price point

benign characteristics under normal operating conditions. This 130mm mid/bass unit crosses over with the tweeter at 4kHz, and uses the same chassis, motor and anti-resonance plug as that of the 700 Series.

The crossover has also had some work done; 600 Series Anniversary Edition models have what Bowers & Wilkins calls: “greatly improved” bypass capacitors specially treated by Mundorf. Identical to those recently deployed in the 700 Series Signature, these new tweeter caps promise a tangible sonic improvement. They connect to the usual set of bi-wireable speaker binding posts around the back, above which you can see the company’s familiar Flowport reflex port. The cabinet itself seems pretty inert as budget boxes go; I’ve heard many that sound far more lively when you rap them with your knuckle. The white matte finish of the review sample is good – if not lavish – giving a clean, modern look.

The manufacturer claims a frequency response of 52Hz to 28kHz (±3dB), 8ohm nominal impedance and a recommended amplifier power of 30W to 100W (into 8 ohm). The claimed 84dB sensitivity isn’t great, 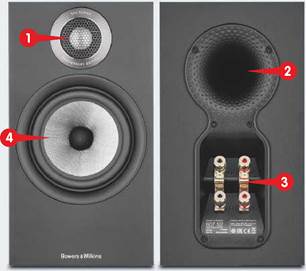 yet isn’t unusual for a small cabinet; it just means that low-powered valve amplifier owners need not apply.

I find the 607 S2 Anniversary to be most user-friendly. My pair works very well close to a boundary wall, when I insert the supplied foam bungs. Should you wish to un-bung them, you’ll need about 25cm of free air from the back wall. Listening, as I do, to lots of different loudspeakers all the time, one soon learns that 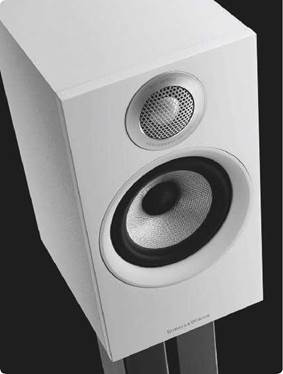 budget offerings can be enjoyable if they manage to retain the essential ingredients of the music. To do this, the ability to start and stop in time with the beat, have a reasonably quiet cabinet and just enough focus and detail to hear roughly what’s going on in the mix, are all essential ingredients. Some budget boxes manage this, others do not – and this sits firmly in the former camp.

Considering its price tag, it does more than expected – and better than any previous entry-level B&W standmount I’ve heard. Its overall level of musicality, refinement and detail is top notch at this price. It has a clean, lively, upbeat character that enjoys music with a strong beat, yet there’s enough delicacy to enrapture the listener with more subtle and/or cerebral music. Compared with the company’s budget boxes of five to 10 years ago, it’s far less coloured too – letting you hear more into the mix.

Let’s address the basics first. Its bass is decent; taut and tuneful, if lacking in extension and power – of course, it’s a small £ cabinet so it’s never going to distinguish itself there. The good thing is that the 607 S2 Anniversary’s bottom end never draws attention to itself, letting you focus on its capable midband and treble. High frequencies are about as crisp and smooth as it’s possible to get from a budget metal dome; indeed I think this is a really strong point for the little B&W. Hi-hat cymbals for example, sound more lustrous and sparkly than all its price rivals that I’ve heard – yet there’s never any harshness to speak of.

Electribe 101’s You’re Walking – a classic nineties techno track – is surprisingly smooth with a decently warm and propulsive bottom end and subtle and etched drum machine hi-hat sound. Its midband is really nice too, with an expansive soundstage and surprisingly mature treatment of female vocals. Moving to some heavier rock courtesy of Neil Young’s Like A Hurricane, this speaker shows similar signs. It doesn’t put a foot wrong, handling the close-miked, edgy and shrill vocals with surprising elan. The result is a big, powerful and engaging sound with plenty of nice details.

More surprising – given the 607 S2 Anniversary’s price – is the emotion coming off the record. This baby B&W really catches the windswept feel of the song, with those plaintive vocals and big rock riffs. Indeed, it proves more able to reach inside a recording than expected. I find myself listening to some rather dour and downbeat new-wave from Japan (the band not the country), and really getting into its enveloping and atmospheric sound. Swing isn’t a rousing pop number at the best of times, but this speaker evokes the minor key mood of the music powerfully nonetheless. I’m normally only able to enjoy this sultry, introspective track through far higher resolution loudspeakers, costing three or four times the price.

More than just a range refresh, B&W’s baby box has had new life breathed into it, in a rather skilful and expert way. The new 607 S2 Anniversary seems more than the sum of its parts, when budget standmounters are so often less. I find it enjoyable and highly engaging across all types of music, communicating just enough of what’s really important to remind us why we love music. At this modest price you can’t say fairer than that, so it comes heartily recommended