As Audiolab joins the stream age, Ed Selley sees whether its off-the-peg platform and audio prowess are a recipe for success. Read our Audiolab 6000N Play Review.

For a company with such a strong presence in the affordable audio sector, it might seem rather counter intuitive that this is the first streaming component to be released by Audiolab. The 6000N Play is the latest addition to the entry-level 6000 Series, but unlike the 6000CDT CD transport, the 6000N Play is not dependent on the matching 6000A integrated amplifier for its decoding. It has a built-in DAC in the form of an ESS Sabre ES9018K2M chipset – the same version found in the 6000A. Interestingly, there’s still a pair of digital outputs – one coaxial, one optical – at the back for those that already own a 6000A (the Audiolab website suggests this is a superior connection method) or to connect an external decoder. A USB-B port on the rear connected to the 6000A via the supplied cable allows the amp’s volume to be controlled using the 6000N Play’s app.

Perhaps because the matching amp has digital inputs, there are no additional inputs on the 6000N, which could be an irritant if you have chosen to partner it with a different amplifier, but there is a USB-A port for updates and remote input and output triggers for complete system integration. Despite what might seem like a basic set of connectivity options, it doesn’t place the 6000N Play at a significant disadvantage when compared with rivals (see boxout).

Rather than develop its own operating system, Audiolab has incorporated DTS Play-Fi. As the name suggests, this is a streaming platform offered by American multi-channel audio company DTS that is used by a number of networking component rivals. Wired and wireless networking options are

It gives a balanced, unembellished and extremely evenhanded presentation

supported and, as all Play-Fi devices appear on the same app, this offers the possibility of a very flexible multi-room system that isn’t tied to any particular brand. Simply hit the Groups option in the app and you can select which compatible products to play together.

As well as the ability to stream from a physical library of music at PCM resolutions up to 24-bit/192kHz (DSD is not supported), there is an excellent spread of integrated streaming services including Tidal, Qobuz, Spotify, Amazon Music and Apple Music with some less well- known options making up the numbers. There is no Bluetooth, Chromecast or AirPlay support, which my be a limitation for some buyers.

With the 6000N Play fully updated to the latest software version, this is the fastest and most stable Play-Fi device I have experienced, although browsing the contents of my music library still feels a little haphazard. There is no grid view of albums and there doesn’t appear to be any way to display only the streaming services you’ve subscribed to, but the most frustrating thing is the lack of gapless playback which means it won’t play any album from my music library without unwanted pauses – although we’re told this will be addressed in a future software update.

In keeping with a number of streamers we’ve looked at recently, the 6000N Play has little in the way of controls on the chassis. The front panel is almost completely blank, save for a power button on the right-hand side and six preset buttons. These can be assigned to internet radio channels and even specific albums for quick access. I would still like the ability to stop playback on the front panel via a means less drastic than the power button, but it is in keeping with many streaming products at this or any price. Build quality is excellent and fits with the high standard we’ve seen from the two other components in the 6000 Series. In a field of competition that is usually half-width (or less) and frequently made from plastic, the full-width, all-metal 6000N Play feels very substantial and looks really rather smart on my equipment rack.

Having completed the relatively straightforward setup process, the 6000N Play clearly demonstrates Audiolab’s understanding of digital decoding and the means by which it gets the best from the ESS DAC chipsets. The way it delivers the 24/96 OKNOTOK remaster of Radiohead’s OK Computer is understated but supremely accomplished. On first listen it can come across as almost a bit subdued, but after about half an hour it becomes clear that everything in the mix is there for you to enjoy in a balanced and extremely even-handed presentation that does without any embellishment. Thom Yorke’s wonderful vocal turn in No Surprises is placed centre stage in the mix with supporting instruments perfectly located behind him. More than anything, it sounds fundamentally right.

This understated ability extends to the timing and immediacy that the

Rather than develop its own operating system, the Audiolab adopts DTS Play-Fi

6000N Play brings to music. Again, on first listen, you might feel that compared with some other streamers, the Audiolab feels almost gentle in the way that it delivers something like Lissie’s Why You Runnin’, but while it certainly isn’t adding any impetus of its own, it never loses any of the head-nodding funkiness that underpins the music.

It also means that when you really don’t want a surging intensity to the music, such as with Nils Frahm’s lovely Wintermusik, the presentation is simply gorgeous.

The 6000N Play also does a fine job of extending this even handedness to the frequency extremes. The top end never feels curtailed or lacking, but it has a truly outstanding level of 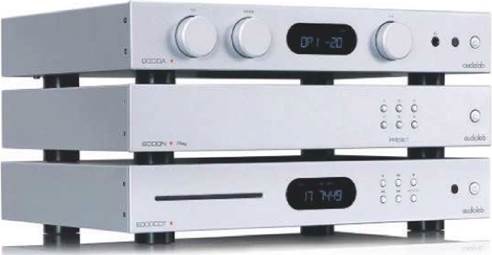 refinement. Playing the edgy and somewhat compressed Echo Park by Feeder, it loses none of the intensity of the album but still does a fine job handling the worst excesses of its production. If anything, the bass response is even more impressive.

This isn’t the most seismic performer I’ve encountered and there are a number of similarly priced rivals with a little more punch to them, but the integration and tonality is consistently impressive, never dominating the upper registers while avoiding leaving the performance feeling lightweight.

It feels entirely ‘undigital’ to listen to with a natural, unfatiguing and effortless way it goes about making music and has an engaging manner that many rivals will struggle to emulate. Used with a lossless streaming service – in this case Qobuz – it is possible to play a wide spread of music across many hours of listening without meaningfully wrong footing it. Even with compressed material such as BBC 6 Music and Deezer Premium at 320kbps, it is a very easy product to listen to and enjoy for extended periods. If, as Audiolab seems to suggest, performance can actually be improved by connecting it digitally to the 6000A, that particular duo of components becomes something of a no-brainer option.

On balance, the performance of Audiolab’s 6000N Play is impressive enough to overlook some of the foibles of the DTS Play-Fi platform – which does at least seem to be making progress of its own with software updates to overcome the lack of gapless playback on the horizon. It might not be as slick as many we’ve seen, but even so this is the best-sounding streamer under £, balancing realism with refinement and engagement. With some tweaks to the software, the 6000N Play could be a beautifully judged and potentially outstanding product. As it stands, though, it’s merely a very good one

The 6000N Play is similarly priced to Volumio’s Primo, which doesn’t support as many streaming services (although with AirPlay and Bluetooth on board, it doesn’t need to), but as a control experience it is better than the Audiolab. When it comes to sound quality, the experience Audiolab has here makes itself felt and the 6000N Play has the edge and is more satisfying to listen to for extended periods. Given the Primo will also output to a USB DAC, it has more upgradeability but if you simply want the best-sounding streamer at the price, the 6000N Play is the pick of the pair.

A great streamer, but needs OS update to make it an outstanding one

£449.00
Added to wishlistRemoved from wishlist 0