Audio Analogue’s Puccini Anniversary 80 Watt amplifier is almost bizarrely simple. I barely knew what to plug in. No digital, no phono stage, just a few analogue Line inputs. Very little to see or play with on the front panel too.

This is a stripped down audiophile design, reminding me of early Naim and Exposure ampli­fiers that similarly sold on such an approach, relying in particular on massive power supplies that gave conspicuous low end grunt. Audio Analogue similarly focus on low end performance here, but additionally claim this is a “zero-feedback inte­grated amplifier”, suggesting sound like that of a valve amplifier – more later. 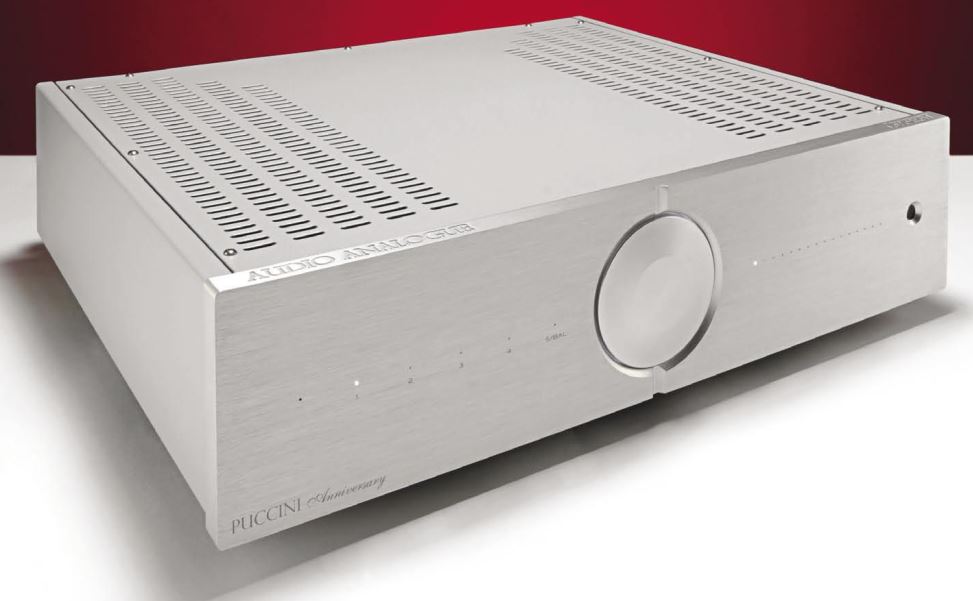 The Puccini Anniversary is big, measuring 445mm wide (17.5in), 390mm deep and 120mm high, its weight a sturdy 1 5.5kg. It will fit a 1 9in rack OK, but with not much to spare. The thick brushed aluminium front panel may look barren but in fact to right of the central control 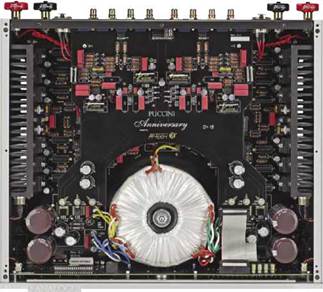 A big white toroidal transformer of the linear power supply lies just behind the front panel, with brown smoothing capac­itors at either side.

Along the left and right side panels sit heatsinks to keep the ON Semiconductor output transistors cool.

A sturdy little remote control changes volume and inputs too, like the control disc. There is no headphone output, nor loudspeaker switching, but the amplifier can be muted, LED brightness altered and the volume control over-ridden for fixed gain, known as Direct Mode. Inter-channel balanced can also be adjusted.

Feedback is necessary in transistor amplifiers to lessen distortion, widen bandwidth and – especially – compensate for variability in operating parameters. It’s unrealistic to operate transistors without feedback; the term ‘zero-feedback’ usually means no loop feedback but feedback can be applied in other ways, such a degeneration and/or servo-feedback of individual stages.

Valve amplifiers by their nature cannot use heavy feedback and, moreover, can be used without feedback at all – especially triodes. Some feel this benefits sound quality – and I certainly hear a tight, arguably over-controlled sound from high feedback transistor amps. My 300B World Audio Design triode amplifier meanwhile, with switchable feedback, shows that zero feedback offers the most spacious sound, but it also results in loose bass. There does seem to be optimum between no feedback and high feedback. A little feedback is best to tidy things up.

This is all very well with valves, that are reasonably consistent in their device parameters (gain, bandwidth, linearity etc) but less so with transistors, that are inconsistent. Also, most are not designed for audio work. Sanken (japan) make matched, thermally tracked audio power output transistors, as do ON semicon­ductor (USA) who, Audio Analogue say, supply the output transistors within this amplifier.

But feedback is still necessary even with dedicated audio devices – and the Puccini Anniversary suffers by lack of it, with distortion levels up to 0.8% our measurements revealed – high. Harold Leak (Leak amplifiers) said long ago that around 0.1% is a threshold and this still applies today.

I hooked up the Puccini Anniversary to our Martin Logan ESL-X hybrid electrostatic loudspeakers, using Chord Company Signature Reference cables. CD was fed in from an Oppo BDP-205D via Chord Company Epic balanced 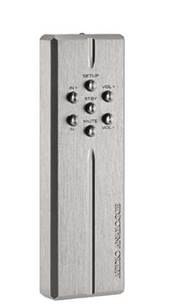 A simple but solid remote con­trol, honed from aluminium. It alters volume, selects inputs and can put the amplifier into standby power mode.

cables, and hi-res from an Astell&Kern AK120 portable player connected to the Oppo via a short optical digital cable.

This is a very, very, very good sounding amplifier. Sorry for the repetition but as transistor amplifiers go the Puccini Anniversary was immediately and obviously striking. Unlike most solid-state amplifiers it had stage depth, a strong sense of perspective being brought to the choir behind Mercedes Sosa singing Misa Criola (CD). This certainly brought the Pucinni into valve amplifier territory. But in addition to stage depth the Puccini had powerful bass delivery, the Chieftains bodrans jumping at me in the opening of Sinead O’Conner’s Foggy Dew (CD), taut and dynamic with vivid sense of resonance from the body of the instrument.

Whatever I played through the Puccini Anniversary, I was greeted by a powerful yet open sound that was both lovely and exciting at the same time. This amplifier goes one step beyond most other all-transistor designs. The only

drawback being – distortion. At times, with the lacerative steel strings of Nils Lofgren’s guitar in Keith Don’t Go for example, a smidgeon of edginess was apparent through our revealing electrostatic panels. Hard hit cymbals were less than pure in their brassy shimmer. Not a big issue at first listen but in the long term some may not be so happy. Trade offs here – and a personal decision on acceptability.

In my Fyne Audio loudspeaker review I also note that Willy DeVille spitting the word “Spanish” into the mic from the song Spanish Harlem (CD) was edgy, due to the forward upper midrange of the Fyne adding emphasis to distortion harmonics. I think here the Puccini Anniversary

needs careful auditioning: it certainly grabbed my attention straight away with its dramatic sound quality, but there is a drawback: you can’t have it all with transistors!

In sound quality Audio Analogue’s Puccini Anniversary amplifier was impressive. This is an amplifier worth hearing. Massively powerful bass, fast and tight yet with glorious sound staging, the only drawback being some edginess at times, evident with strong treble. It’s a purist design and achieves its designer’s aims as such, I suspect. But bereft of facilities and costing £ this stripped down amplifier is a speciality product.

The Puccini Anniversary delivered 80 Watts into 8 Ohms and doubled this to 160 Watts into 4 Ohms, with distortion of around 0.2% (8 Ohms), just before output clipping. It has a very sturdy linear power supply with good regulation, explaining its weight and the ability to double power from 8 Ohms to 4 Ohms, suggesting strong transient bass delivery. 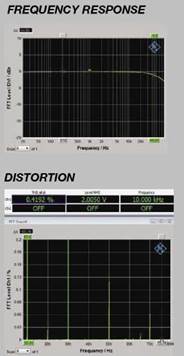 Output impedance measured 0.23 Ohms, giving a damping factor of 35 – satisfactory for good electrical damping if on the low side as transistor amplifiers go, possibly because Audio Analogue choose not to use heavy feedback.

I say this because distortion levels were on the high side, 0.4% third- harmonic at 1 Watt into 4 Ohms at

Frequency response measured flat from 3Hz to 44kHz (-1dB), a good result. Sensitivity was adequate at 0.5V for full output, fine for silver disc players (2V out) if a little low for low gain phono stages (0.2V out).

Audio Analogue’s Puccini Anniversary has strong current delivery from a sturdy power supply, but distortion levels were on the high side. It is likely to sound vivid, if not as smooth a some.