It might not be a popular opinion, but in my view Acoustic Energy is an illustrious loudspeaker brand that has been resting on its laurels until fairly recently. For a while, ownership and management changes cast the ship a little off course. Yet of late the company has regained its mojo, launching a series of impressive and characterful loudspeakers. Now fully independent, it’s run by a close-knit band of real enthusiasts – if you ever get to meet the chief designer Mat Spandl you’ll soon sense his passion. 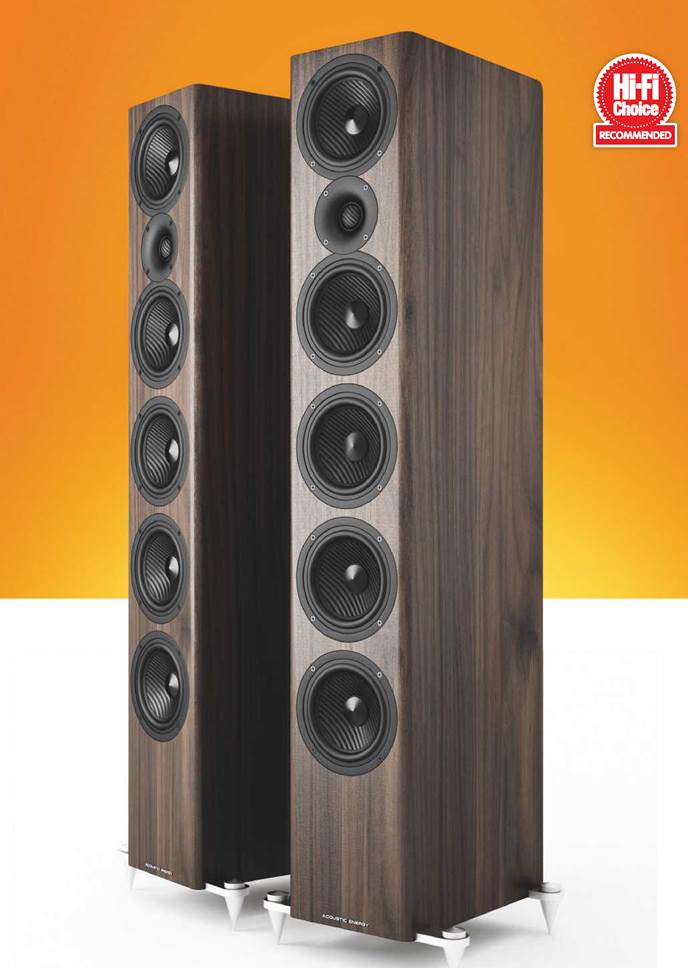 Tonally it’s lovely; it has a richness you don’t often hear from modern speakers

points. The AE500 standmount and AE509 floorstander are great loudspeakers for the money, for two reasons. First is the use of high- quality carbon fibre drivers and second is the proper job the designer has done with the cabinets. Now, along comes the third piece of Acoustic Energy’s 2020 saw – the AE520.

Essentially an AE509 on steroids, this new floorstander is noticeably taller, deeper and heavier – but shares the family look all the same. Unlike its two-way little brother, this is a true three-way design with a claimed frequency response of 30Hz-28kHz (+/- 6dB), a valve amplifier-friendly sensitivity figure of 90dB and a peak power handling of 300W. The latter is a direct result of the design brief “to produce a true free-space design

capable of driving large rooms to realistic sound pressure levels”, according to Spandl.

AE has been using interesting driver materials for a long time, but thinks its new carbon fibre designs are the best so far. Spandl claims it has the same stiffness and pistonic qualities as hardened aluminium, yet half the mass. “This gives improved transient response and low-level detail retrieval.” At the same time, the compound construction of carbon and resin helps to smooth break-up modes usually associated with stiff drivers. “It behaves far better out of the driver’s main operating band, requiring a less complicated crossover and removing the need for heavy-duty surround materials.”

The tweeter is a new 25mm carbon fibre dome design with a cast aluminium WDT waveguide. It’s set between the AE520’s twin 125mm midrange drivers, which sport carbon fibre cones with rubber surrounds, oversized 35mm voice coils and optimised motor and suspension systems. Treble-to-mid crossover takes place at 2.8kHz, above the critical presence region where the ear is most sensitive. Then comes the cavalry – three new specially designed carbon fibre coned woofers take care of the bass from 373Hz downwards. Spandl says: “The trio of 125 mm bass drivers give the authority of a single 250mm woofer, but in the same slimline cabinet.”

That’s only half the story, though. Like its smaller, older floorstanding brother, the cabinet sports Resonance Suppression Composite material – Acoustic Energy’s own version of constrained layer damping.

It makes the cabinet walls far less resonant. Both midrange drivers are mounted within their own dedicated, sealed sub-enclosures while the three low-frequency drivers are reflex loaded by a large rear-facing slot-shaped port, in a common lower sub-enclosure. Extra internal bracing is used, compared with the 509. Externally, there’s a choice of piano gloss white or black and American walnut wood veneer. The supplied magnetic grille fits on cleanly, but is best left off for critical listening. Floor coupling is achieved by the supplied solid aluminium bars.

Interestingly, the extra internal cabinet volume of the AE520 hasn’t been used to get deeper bass; it goes down just 2Hz lower (according to the manufacturer) than the AE509. Instead, Matt Spandl says it has been designed with a little more efficiency in mind. The accent has been on quality, not quantity – as evidenced by the 14-element crossover, which has air core inductors and polypropylene film capacitors in the signal path. The low-frequency circuit is physically isolated on a separate PCB to reduce crosstalk between the components. Wiring is oxygen-free multi-strand copper throughout. “We’ve found this is the best wiring for this application in testing”, explains Spandl.

The AE520 is not one of those weedy, anaemic-sounding floorstanders that have you wondering why you didn’t buy the standmount version at half the price. Instead, you get a large, 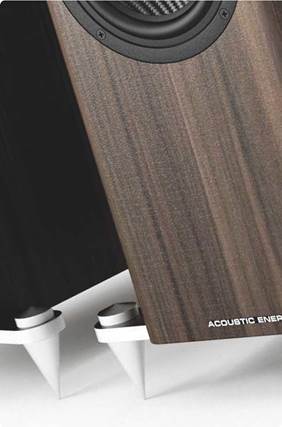 The aluminium bars and spikes efficiently couple the AE520to the floor

muscular and full-range sound that has weight, grunt and go.

That’s not to say it’s lazy and unwilling to pick up its skirts and run; indeed, it offers an interesting mix of deep, fulsome tonal balance and seriously quick transients. That’s quite a rare combination, and a good one too. Level 42’s Something About You, which is dominated by Mark King’s sinewy bass guitar running right through, sounds really snappy and propulsive – as well as having lots of bottom-end weight. The result is an extremely engaging sound that isn’t in the least bit forward.

There’s a caveat here, however, firstly I find that despite its highish quoted sensitivity, it really likes a powerful solid-state amplifier with plenty of bass grip. It doesn’t sound at

all bad with my World Audio K5881 tube amp, it’s just that Exposure’s 3010S2-D (HFC 397) transistor integrated with its many extra watts better suits its gutsy, rigorous sound. Also, this speaker needs a largish room as it can overpower smaller spaces. You want it to be at least 50cm from the rear wall, to avoid all that low-frequency energy.

Tonally it’s lovely,; it has a richness that you don’t often hear from modern speakers. It’s not quite colouration as such, rather it doesn’t shout at you in the way that some contemporary designs do. Put on James Taylor Quartet’s Wait A Minute, and what’s normally quite a forward ­sounding track takes a slight step back; things don’t sound quite so chromium plated or shiny. This is very much a facet of Acoustic Energy’s carbon fibre drivers, and key to the success of the AE500 and AE509. It also shares their lovely integration; there’s a dark, velvety sheen to hi-hat cymbals, that drops right down to its smooth handling of midband vocals.

One key improvement over the AE509 is the level of detail coming out. You can hear behind the leading elements of the mix better, to take in what’s happening at the back of the mix. That’s a classic characteristic of a well-designed three-way; the sound isn’t all squeezed out of a toothpaste tube at you. I hear the overdubbed party noises on the James Taylor track better and it’s especially apparent on dense guitar rock like REM’s Welcome To The Occupation, where I’m able to follow Peter Buck’s Rickenbacker guitar noodling all the way through the song, as well as a layer of strummed steel strings behind it. At the same time, the band’s famous vocal harmonies are easier to discern than you normally get from a speaker of this price, set behind Stipe’s double-tracked lead. This is all the more apparent when the volume is cranked up, with the AE520 showing great composure under pressure.

Sound staging is most impressive too; not in an overblown, throwing-it- at-you kind of way, but in a well- proportioned and natural manner. The first movement of Vaughan Williams’ A London Symphony performed by the London Philharmonic under Bernard Haitink is beautifully carried, the AE520 digging deep to convey the immense spatial precision of my reference Chord Hugo 2 DAC (HFC 428) feeding it. There is an extra level of breadth and depth here, which makes for a really immersive experience; it’s so tangible that I almost feel like I can get up off my sofa and walk around inside it.

Overall then, this is a most impressive new flagship floorstander. It’s an excellent all-rounder with no obvious vices and a lot to be proud of. The only qualification that needs to be made is that it’s not quite as ‘characterful’ as its smaller AE509 brother, which has a puppy-like enthusiasm for everything it plays. The AE520 is more mature; it’s more transparent and less interventionist, telling you what’s on the recording rather than simply making it sound good. In other words, you need decent ancillaries to really get the best from it. Suitably equipped, you’ll find it hard not to love

Bowers & Wilkins’ mighty 702 S2 has ruled the big floorstander roost for a good while. The AE520 gives a tonally richer, more subtle and ultimately insightful sound, with an extra dose of lower bass grunt tagged on for good measure. The B&W is clearly lighter, brighter and shinier in character, giving a more ‘hi-fi’ sound compared with the AE’s smoother, mellower and yet more tuneful nature. Ultimately the choice will come down both to personal preference and the partnering ancillaries that are being used with it.

$143.99
Added to wishlistRemoved from wishlist 0

£499.00
Added to wishlistRemoved from wishlist 0