A CD player with valves.

Even better with Vincent’s CD-S7 you get a valve in a window. It excites audio enthusiasts attracted by the warm sound and warm glow of a thermionic device from yesteryear. In case you are won­dering, the idea here is to get the spacious sound stage and easy going smoothness that valves typi­cally provide, as a balm to the at-times harsh sound of CD. Hot things in windows are not the point! 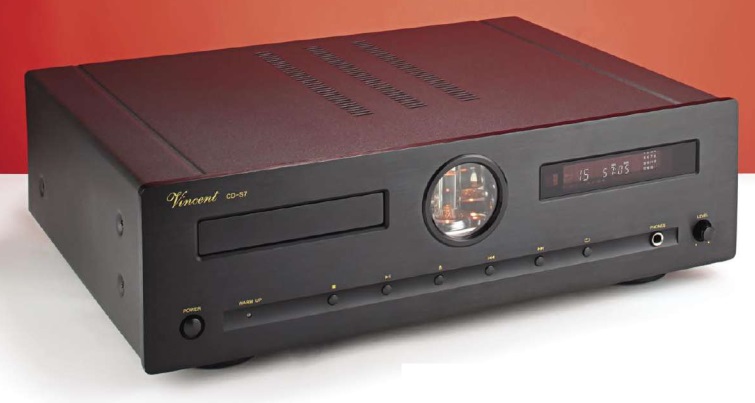 I carefully said “with valves” because the CD-S7 is not an all-valve CD player; no such thing is possible nor exists. It is, like other valve CD players, a normal chip- based player with a valve output stage. All the same Vincent capitalise on its inclusion of valves by putting one in a window, stark centre, as you can see from our shots. As usual, there’s an orange LED backlight to provide faux-glow just to make the point this player is different to most, and also to make it stand out, unlike bland black-box CD players. Small-signal valves like the 12AX7 have a life of around 10,000 hours and are cheap to replace – around £ apiece.

I’m very happy with valve output CD players as a concept, but the digital front-end feeding the valves must work well in itself, in order to feed the valves a clean signal they can work with. Often the valves do little, being used as line drivers with no gain. Here the CD-S7 looks different, even very different, because two 12AX7 (6922) double-triodes are used, one per channel, suggesting the valves provide both gain and impedance conversion (cathode follower) to drive an external cable effectively.

Even more surprising was Vincent also use a valve mains supply via a 6Z4 rectifier – the one in the window. So the valve stages of this player have been extensively crafted in true audiophile fashion to give purist valve sound quality. I was impressed to being taken-aback by the complexity, something seen in the player’s circuit board that is both very large and very complex.

It’s easy to cram in one 12AX7 to provide line drive on each channel, but Vincent have gone much further.

On review here is the CD-S7 player, not the CD-S7 DAC. Vincent don’t identify the DAC chip in this player but peering inside I found it’s a top quality Burr Brown PCM 1796.

Size wise the unit is large, 430mm wide, 356mm deep and 132mm high. With so much inside, including valve power supply, it is also weighty at 9kgs. But some of the weight is down to sturdy build, with a thick extruded alloy front panel, anodised black in our sample; silver is an option. Behind it lies a strong sheet steel chassis and cover.

The remote volume control varies output to the rear sockets whilst the headphone rotary control attenuates this to a headphone amplifier feeding the headphone socket. It delivers a massive 7V (max) to headphones measurement showed, way more than the rear outputs. It’s a comprehensive arrangement giving remote control of both line output and headphones. Vincent specify suitable headphones as 32 Ohms minimum, which accommodates most headphones, 40 Ohms being a common minimum.

At left lies the power button and a blue LED that flashes for 25 seconds until the valves have warmed up, creating a short start delay.

The rear panel has only unbalanced phono-socket analogue audio outputs, even though the handbook states (p28) there are balanced XLR sockets, but this applies to the CD-S7 DAC – the player lacks XLR outputs. There is a single S/PDIF digital output through ‘coaxial’ electrical output (RCA phono socket), allowing connection of an external DAC. Vincent fit a lamp brightness slide switch with three brightness positions and Off, plus a 12V trigger input for on/off control from other items. Power is via an IEC socket for a mains connector.

The player’s remote control is large, weighty and comes with a wealth of options, including remote control of volume. This allows it to be connected direct to a power amplifier, forming a simple but pure system. The remote has a full array of controls including track programming, a numeric keypad, fast forward and reverse, a dimmer (no less!), plus much else not commonly seen nowadays, like A-B play and Intro play. All a bit yesterday, but useful to some perhaps. For me, its the inclusion of volume control that’s important – a 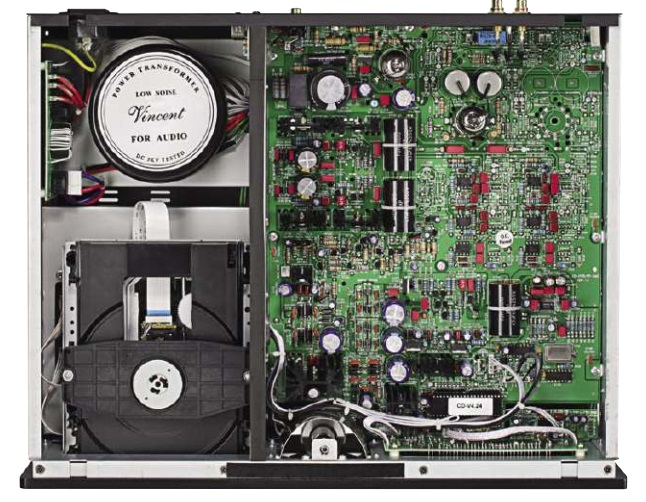 Inside the CD-S7 lies a large circuit board of unusual complexity, partly due to the need for valve power supply built around a 6Z4 valve rectifier. The 12AX7 (6922) valves can be seen at rear, whilst the Burr Brown PCM 1796 DAC chip is at right, surrounded by red capacitors.

The player was nice to use. It sits firmly and feels solid. The CD mechanism has the traditional flimsy sliding plastic draw – it isn’t a slot loader. The remote is button-heavy and has small legends – not so easy in a dimly lit room. Rear outputs are Spartan. All the same, the CD-S7 remains a complex player internally and can do a lot externally, so although in some ways it appears simple, it is not.

Vincent’s purist approach to its valve stages more than paid off in sound quality – it was nothing short of eye poppingly dramatic in visceral power. The player had subterranean bass with Lady GaGa’s Bad Romance and the slowly plucked bouzouki in Loreena McKennit’s Gates of Istanbul permeated our large listing room in eerie fashion. Whatever I span the CD-S7 had a full and rich low end that was not only spacious but powerful and embracing beyond any CD player I recall reviewing. It was sort of like listening to a 16bit steamroller, normal players being bicycles. In this respect the Vincent stands out clearly from all else

A very simple rear panel with little in the way of outputs, specifically no balanced XLRs. But there is an LED dimmer/off switch and S/PDIF digital output (electrical, via RCA phono socket).

around, including other valve output CD player’s I’ve heard that, whilst sounding very nice were not so conspicuously dramatic.

Generally, the sound was easy going, although I wouldn’t say mellow. The guitar of Antonio Forcione playing Tears of Joy overwhelmed with its vivid and full bodied presence, but there was no laceration to the strings – not the hard edge I am used to from this wide dynamic range test track. It sounded like an acoustic guitar, rather than a ‘hi-fi version’. This encompasses the rich resonant sound of the instrument, so commonly and carelessly bleached by CD players.

A hugely spacious sound stage and feeling of deep power pushed Josefine Cronholm’s In Your Wild Garden out at me, her voice hauntingly powerful.

The Vincent’s panoramic sound stage and glorious dynamics suited Classical, orchestras like the Royal Philharmonic playing Tchaikovsky’s Symphony No6 all but burst from our ‘speakers. Instrumental strands such as violins were freely separated and easy to follow, whilst large percussion, tubas and bassoons had lifelike presence in front of me.

Vincent’s CD-S7 hybrid CD player is, behind its simple physical interface, a complex machine well thought out and executed in design terms. 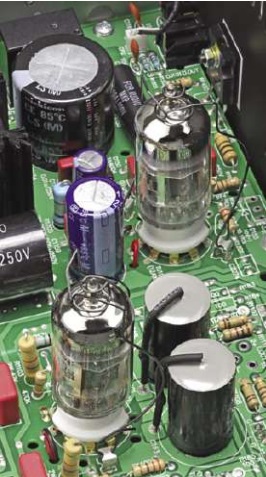 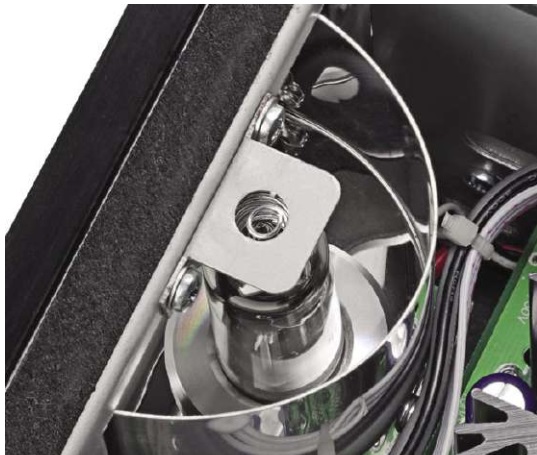 Behind the front window lies the 6Z4 rectifier valve; it is back-lit by an orange LED. Brightness is switch adjustable.

The output valve stage, with its valve rectifier, delivers a spacious and powerful sound of enormous presence, largely due to fluidly delivered low frequencies that add massive sonic weight. Orchestras loom large and Rock has a drive few others can match. I was taken aback by the S7’s sonic ability – a great player well worth hearing.

Frequency response of the CD-S7 measured flat to 21kHz our convolved impulse response analysis shows, a fairly normal result with – in this player – no influence from the use of valves. There are no filters to change this result.

Whilst valves can just accommodate the dynamic range of CD there is always some distortion at peak level (0dB), in this player measuring a small 0.17% – above the usual 0dB level of around 0.003% but still low enough not to be an issue.

At -60dB distortion measured 0.27%, as our analysis shows. Again it’s close to the usual figure of 0.22% that is set by 16bit quantisation noise and harmonic distortion from CD. This resulted in an EIAJ dynamic range value of 98dB – a tad low by current standards where 102dB is possible. Although quoted noise looks low at -107dB this is due to muting; the dynamic range figure is a measure of the noise floor (+thd) without muting.

Output measured 2.5V, a little above the usual 2V standard. There are no balanced XLR-socket outputs. The headphone output with volume control gave 7V out at full volume.

Vincent have balanced this player well to avoid distortion at high output and noise at low output, giving a good all round set of performance figures from CD, when using valves. 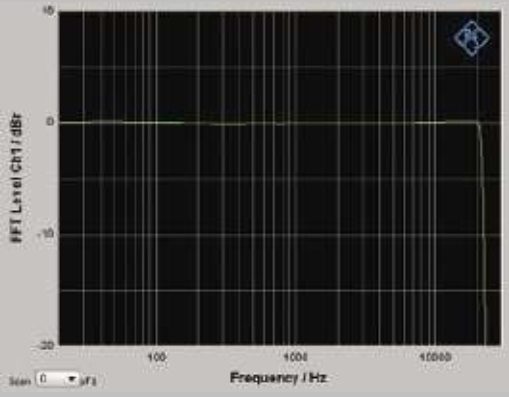 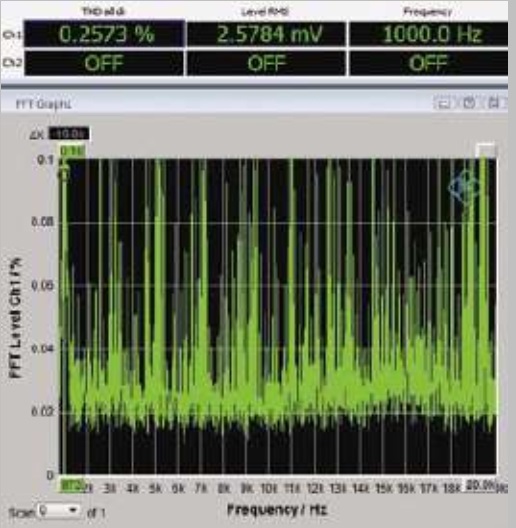 Mighty sound of enormous presence from CD. Quite different from most else. Deeply impressive.