Would you trade immersive audio for kick-ass stereo? Steve May ponders the allure of Teufel’s premium Cinebar Pro soundbar/subwoofer system 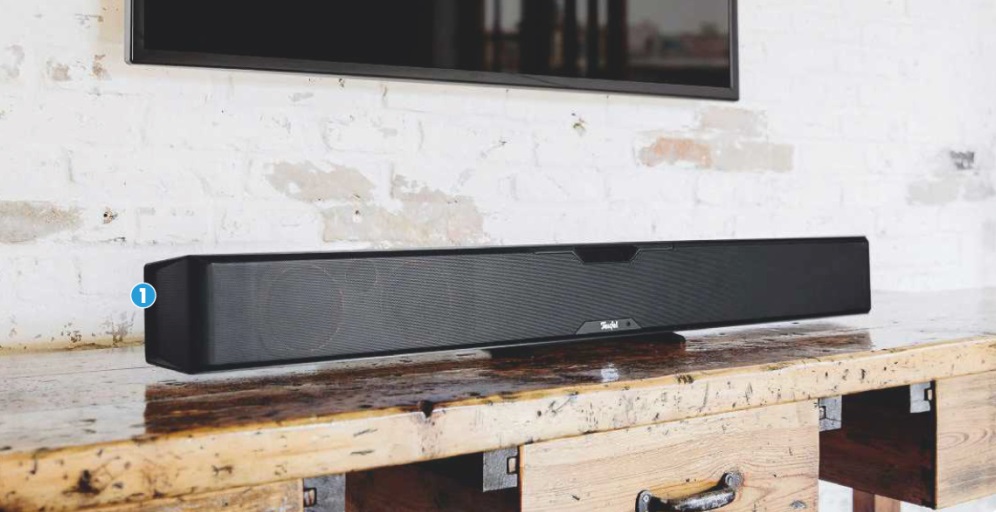 Top-tier, alongside the 3.1-channel Cinebar Trios

Like the average dino, it’s huge too. Measuring over a metre wide (best not to partner it with anything less than a 55in screen, and find plenty of below bezel space to accommodate its 14.7cm height), it lumbers onto the scales at 11kg and will test the mettle of any wallmount.

So best give the Cinebar Pro a wide berth? Hardly. The thing sounds great.

As befits its price ticket, build quality is exceptional. The soundbar cabinet has a smart hairline finish, while the non­removable grille is metallic. Behind, in a stereo configuration, are four 4in midrange drivers and two tweeters. These have a subtle metallic red trim, just visible through the grille.

The Cinebar Pro doesn’t just use a forward-facing array to create its soundstage; two additional side-firing 4in midrange drivers are positioned at the bar’s ends, to add extra sonic width.

Setup is old school. If you own a mothballed SPL meter, here’s your chance to give it another whirl and set levels. There’s no calibration microphone supplied; instead you’ll need to manually enter distances between the soundbar. subwoofer and listening position. The main ‘bar also requires a distance from speaker to either side wall.

The user experience is not all primeval though. Wireless functionality extends to Bluetooth, Spotify Connect and Google Chromecast, and the soundbar itself is a fully equipped system hub, offering a quartet of HDMI inputs, plus an HDMI output with ARC. CEC control and 4K passthrough are on the spec sheet (Teufel makes no claim on HDR support, but the ‘bar did successfully pass an HDR10 signal). Audio-wise, it’s compatible with base-level Dolby Digital and DTS sources, although multichannel soundtracks are down-mixed to 2.1.

Additional connectivity includes coaxial and optical digital audio (helpful if your pre-diluvian telly does not offer HDMI with ARC); two 3.5mm inputs; and a wired subwoofer output (which you won’t need). There’s also a 3.5mm headphone jack; the soundbar does not support Bluetooth headphones. There’s no dedicated USB media player.

Basic cable management comes in the form of a trio of red rubber bands on the rear, designed to stop cables drooping. A rear-side cavity gives HDMI inputs/output plenty of space.

Two Wi-Fi aerials can be raised devil horn-style when required. It’s worth remembering these when positioning the soundbar, as the last thing you want is for this plastic pair to block your screen view. Personally I’d rather use wired Ethernet to get connected, but surprisingly there’s no hardwire option here. It’s Wi-Fi or bust.

The second part of Teufel’s premium system is the accompanying T10 subwoofer.

This is a similarly large, ported beast, with a 10in driver and claimed 150W power plant.

It connects wirelessly to the soundbar.

No dumb boom box. the T10 offers plenty of control.

Interestingly, the subwoofer’s driver can be orientated either downward or forward-facing. The former is a good option when you have a hardwood floor and need it to be positioned relatively close to a wall (perhaps alongside your TV). The resulting bass ripple is generally uniform. Opt for forward-facing when you have a larger space, and can sit the sub away from a wall. The sub’s supporting feet can be arranged accordingly.

The soundbar’s onscreen display is a simple overlaid text box. A settings menu allows you to determine HDMI

The latter noticeably strips back the bass output and is best avoided.

Getting the basics right

While there’s nothing particularly pretty about the Cinebar Pro, it doesn’t disappoint where it counts: sound quality. Teufel has opted to fine-tune the basics, rather than defy the laws of physics or dabble (much) in psychoacoustics.

The result is enormous dynamic wallop, with an engaging mid-range that suits everything from The Chase to Baby Driver. The soundbar presents beautifully, locking dialogue dead-centre. High-frequency details are crystal- clear, never sounding pitchy or acerbic.

The integration between subwoofer and soundbar is also impressive. There’s no doubting the former’s slam and weight, which is just what you need to enliven onscreen action. However, you’ll want to tailor the bass output (both via placement and level adjustment on the remote) to best suit your listening room. When first set up, mine had a habit of suddenly booming with the most innocuous of material. 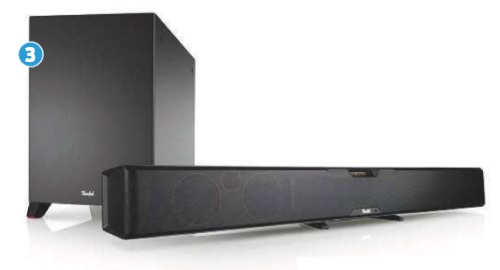 During the unscheduled intrusion in comedy thriller Game Night (Blu-ray), Teufel’s Cinebar Pro effortlessly scales up from social chit-chat to full-blown bedlam. Flying bottles shatter brightly across the front soundstage. while the driving electro score pumps low below like a racing heart. When a head collides with a frying pan, there’s a satisfying weight to the centrally placed ‘bong.’ The soundbar’s side-facing drivers kick into action when Teufel’s Dynamore surround feature is selected.

This processing mode creates an impressive, wide spatial sound, and provides options for Wide or the more exaggerated Ultra. I found Wide the most consistently entertaining. It enhances the stereo presentation without losing solidity, and offers a sense of epic size that works really well with soaring orchestras and Starfleet fly-bys alike.

Yes, the Cinebar Pro hails from a home theatre time forgot. It doesn’t acknowledge next-generation audio codecs and makes no attempt at modern, lifestyle design. It’s also expensive, at least when compared to more sophisticated high-end offerings from the likes of Sony and Samsung. But it’s a titanic soundbar all the same.

Remember: dinosaurs once ruled the Earth. Perhaps they were made by Teufel?

This heavyweight soundbar revisits old-school values to offer a superior 2.1 listening experience. Not a bargain, but certainly a banger.

This active stereo speaker pairing (each with separate midrange and tweeter units) delivers a wireless upgrade to a 4.1 experience. The usual retail price is £, but a bundle with the Cinebar Pro gives a £ saving.

$199.95
Added to wishlistRemoved from wishlist 0

$485.95
Added to wishlistRemoved from wishlist 0