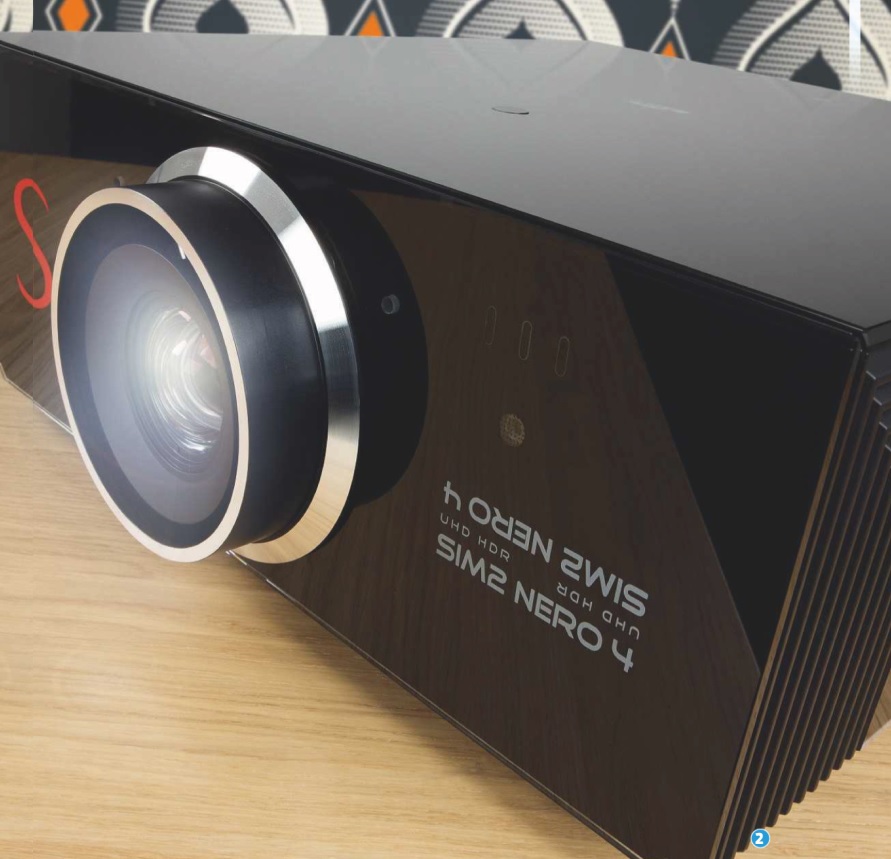 Here is a projector much more worthy of both SIM2’s premium heritage, and its (take a deep breath) asking price.

The changes between the Nero AS and the original Nero 4 begin as soon as you look at it, thanks to a dramatic and huge red S that appears to the left of the new model’s gaping lens.

SIM2 also now plants its branding and model name twice on the projector’s front – one upside down for those who will be mounting the projector to a ceiling.

Otherwise the bodywork is the same: a large, heavy, extremely angular black box clad in a very fetching transparent glass finish. It certainly continues SIM2’s history of producing projectors that can function as objets d’art as well as serious home cinema machines.

Let the light one in

It’s what’s going on inside the Nero 4S compared with its predecessor, though, that really matters to us. Significantly, SIM2 has upped the maximum brightness to a claimed 6,000 Lumens from the original Nero 4’s 5,000. This puts it in a brightness league of its own for the price point. Even Sony’s laser-driven VPL-VW870ES only musters 2,200 Lumens. 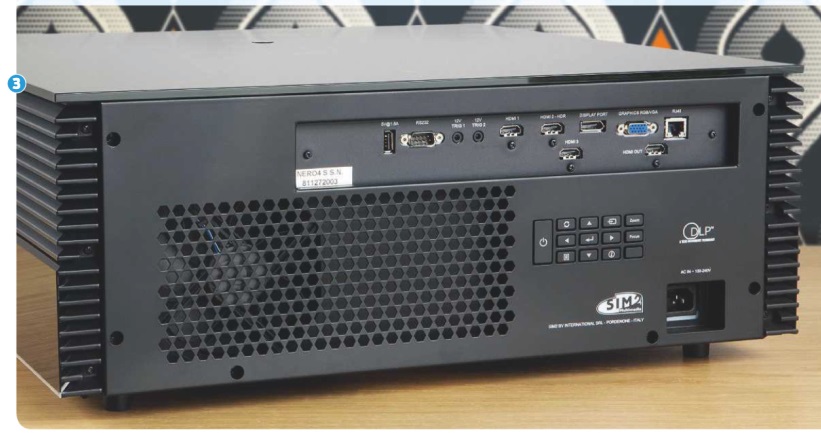 SIM2 has also introduced four new HDR settings calibrated to suit different screen sizes (choose from either 100in, 120in, 140in or 160in). Selecting the right option for your setup has a dramatic impact on picture quality, and is a feature I’d like to see other projector manufacturers introducing too.

Most importantly of all, though, SIM2 has completely overhauled the projector’s handling of HDR content. And it’s here, as we’ll see, that the really transformative stuff is going on.

The Nero 4S’s connectivity matches that of its predecessor. This means you get three HDMIs where most projectors only manage two, although it’s disappointing that only one of the HDMIs (HDMI 2, for some reason) is v2.0a and able to handle 4K and HDR signals. There is, though, a DisplayPort (highly unusual on a consumer product), as well as an HDMI output that provides a loopthrough from the third HDMI input. Other connections are two 12V triggers, a VGA/ component D-Sub input, an Ethernet port, a wired remote port, a USB service port, and an RS-232C control socket. Plenty for system integrators to get up and running with.

SIM2 partners the Nero 4S with the same plasticky, unhelpfully organised remote control it provided with the original Nero 4.1 suppose, however, that this projector will almost exclusively find itself installed in a high-end home theatre environment where control will be handled by an external system. Indeed, some end users may never have need for the remote at all.

Some aspects of the Nero 4S’s setup reflect the fact that it will likely be installed by a professional rather than yourself. The horizontal and vertical image shift adjustments, for instance, are tweaked via an Allen key inserted into holes on the projector’s front. There’s a hugely impressive amount of flexibility in these adjustments, as there is with the 1.96x optical zoom. 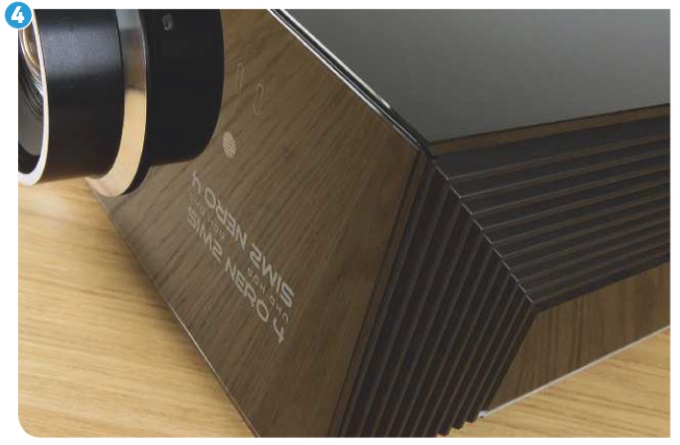 Installers will appreciate that the Nero 4S is compatible with SIM2’s latest Live Colors Calibration software, to help get the optimum results for any room environment.

The remote could be more user-friendly, but at least it’s backlit

The huge performance improvements SIM2 has delivered with this S edition of the Nero 4 are apparent the moment you feed it a 4K HDR source. Straight away I clocked that the image’s typical brightness level looks palpably higher – something that instantly makes HDR feel more convincing, and more of a step up from standard dynamic range.

Even more dramatically, the Nero 4S crafts remarkably extreme peak brightness levels, so that shots of direct sunlight, flickering flames, artificial lights and so on appear with a level of intensity that’s staggering. These light peaks even with content mastered to 4,000 nits, such as the 4K Blu-ray of Pan – are handled without succumbing badly to ‘clipping’ (lost subtle toning). The orange cloud sections as Peter first arrives in Neverland still glow a bit unnaturally, but nothing like as unconvincingly as they did on the first Nero 4. And this PJ handled almost every other bright HDR element that caused its predecessor trouble extremely effectively.

world of television screens. In terms of both its typical brightness level and its management of peak light areas, though, the Nero 4S is a class apart from any other projector I’ve seen.

Its best-in-breed brightness is joined by equally stunning sharpness. It uses a re-engineered, higher-quality lens than its forebear, and the extent to which this – together with SIM2’s single-chip DLP optical system – helps the Nero 4S render every tiny pixel of detail in a pristine 4K image is frankly incredible.

Mr Jang’s shiny silver suit in Lucy (Ultra HD Blu-ray), boasts ultra-fine details and texture I’ve never noticed before. And when Lucy opens the briefcase that might have a bomb in it, you can see that the case lid is textured even from a distance – again something I’ve never been able to resolve on less-quality projectors.

Extrapolate this genuinely stunning level of detail reproduction across the whole image and you’ve got the most spectacular 4K picture – and best argument for 4K technology – I’ve tested. Honestly, it’s that good. There’s no hint of over-sharpness or forced edging, and the best-quality 4K BD images – such as Lucy and John Wick 2 – just look real, for want of a better word.

SIM2’s Nero 4S is also a colour master with 4K HDR content. Due in part to its innate brightness, and in part to its exceptionally deft colour rendering (even in its out of the box state), pictures look dynamic, vibrant, and enhanced beyond SDR (despite the projector not really having any wide colour technologies at its disposal). They’re also utterly and completely natural. This holds true, moreover, regardless of whether you’re watching the direct digital, mostly natural tones of Lucy or the deliberately over­wrought, thematically dramatic tones of the Bad Times at the El Royale Ultra HD Blu-ray.

I only noted extremely minor colour banding with HDR material, even during notoriously difficult shots, such as those featuring the aliens in their white room in Arrival (Ultra HD Blu-ray).

For most of the time – particularly with HDR material mastered to peaks of 1,000 nits (which much of it is) – black levels are far more satisfying than they were on the original Nero 4. Dark image areas look both convincing in their depth and full of shadow detail. 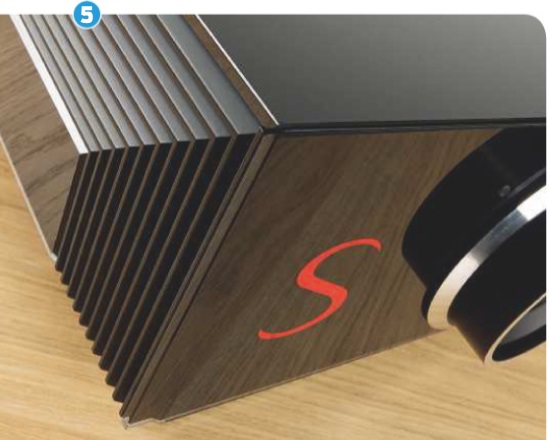 The PJ’s impressive balance between light and dark is achieved without distracting interference from any dynamic iris (though I personally opted to use SIM2’s Dynamic Contrast option).

Motion looks pretty convincing with 24p content too, aside from a touch of ‘billowing’ with vertical objects during camera pans. Don’t bother with the onboard motion processing (Pure Motion, part of the Pure Engine suite), as this causes too many unwanted side effects for comfort, even on its lowest power setting.

Dragging myself away from the Nero 4S’s HDR and 4K visuals, the news isn’t quite so positive with HD SDR Blu-rays. The thing is, the key to its sparkling performance with HDR is that it’s a light cannon beyond anything else in its price range. This means, though, that black levels with SDR content can look washed-out in comparison to rivals. And SDR playback means the projector doesn’t have the punchy bright highlights of HDR to help counteract the lack of black depth.

Switching the SIM2’s lamp to Eco helps, as does nudging the brightness down a point or two and narrowing the iris. But my overall impression is that while bright SDR/HD content looks good – rich and reasonably (rather than emphatically) detailed – dark scenes struggle to completely convince, and it’s here where I’ve felt it right to mark the Nero 4S down.

Black levels don’t hit the sort of depths that JVC’s non-laser D-ILA projectors do with HDR material, either. However, dark areas within HDR images are nuanced and deep enough to provide a likeable foundation to all that brightness; screen/push off the black bars when you’re watching 2.40:l-ratio movies if you can.

There are other negatives to report. One is that I did occasionally notice DLP technology’s rainbow effect, where stripes of red, green and blue appear momentarily over stand-out bright parts of the picture. To be fair, this problem didn’t crop up as often as might be expected of a single-chip PJ running so brightly, but it was apparent with white on black content, such as the ‘chapter headers’ in Bad Times at the El Royale or the white space-ships against blackness in the 4K BD of 2001: A Space Odyssey.

The Nero 4S’s cooling fans run quite noisily in the Bright lamp setting required for HDR viewing. This is barely an issue, though, as prospective setups will likely have the PJ ceiling-mounted high above the seating position, or enclosed in its own hush box.

Finally, the Nero 4S is let down as a potential video gaming beast by a rather high input lag figure of 70ms, but I’m not sure console junkies are its target audience.

Feed the Nero 4S a diet of predominantly 4K HDR movies and TV dramas and none of the above niggles are a major distraction. During my audition, it routinely delivered far and away the most compelling, detailed and dynamic 4K HDR experience I’ve seen from any consumer PJ. That S must stand for Super…

While the Nero 4S is a bit lacking in black level with SDR sources, it’s in an absolute class of its own with 4K HDR. Premium cinema owners should hunt one down.