Studio, by Monitor Audio, is a one-off design by the company, one of the last to spring from the pen (well, the pen on the tablet of the CAD/CAM computer) of Dean Hartley, who stood down as technical grand fromage of the company earlier this year. The Studio is not intended to be a part of a range, nor is it intended to replace any of the company’s Bronze, Silver, Gold, or Platinum models; it’s a purely standalone project, although one that has more than a little bit of flagship PL500-II loudspeaker in its DNA.

The name ‘Studio’ itself harks back to a long-discontinued top of the Monitor Audio tree, although about the only things this loudspeaker has in common with that old range-topper is the name and the use of metal as a diaphragm material in all its drive units. The Studio, 2018-style is a far more down- to-earth model, set in a classic D’Appolito or MTM (mid-treble-mid) design, in line with the central section of the present PL500-II flagship. Of course, that is a cost-no-object, heavyweight multi-driver tower design, and the Studio is a slimline standmount that gets you change from a grand.

Most importantly, what it takes from the PL500-II (and, in fact, all of the Platinum range) is what it calls a MPD or Micro Pleated Diaphragm high-frequency transducer (tweeter). This uses a pleated aluminium film diaphragm bonded to Kapton. This aluminium is then etched away leaving a resistive trace (akin to those on a PCB), which effectively acts as a voice coil. This diaphragm is then held in place by steel plates, and when an electrical signal is passed through the traces, 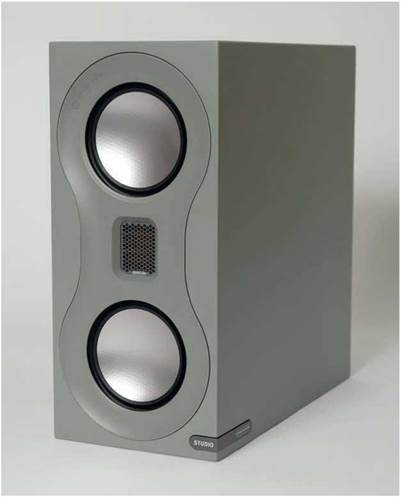 the resultant force makes the diaphragm’s pleats squeeze laterally in a manner akin to an accordion (only much, much smaller). By now, keen-eyed audio enthusiasts will be jumping up and down saying ‘It’s an AMT!’, but they are only part right; the MPD variant made by Monitor Audio uses larger rolls than typical Air Motion Transformer designs, to eliminate frequency nulls up in the 30kHz-40kHz region, and phase shift issues in the audio band. Monitor Audio gives credit to Oskar Heil for the original AMT design but thinks its MPD variant improves upon the original.

Want to know if that was an alto sax playing low or a tenor sax playing high? The Studio will let you into the mix.

Coupled with that Platinum Series driver are a pair of 100mm RDT II mid-bass units, bolted to the rear panel. These are also taken directly from the centre of the flagship PL500-II. First seen in 2016, this hybrid diaphragm features a C-CAM aluminium/magnesium cone front skin bonded to a central core of Nomex, finally with a rear skin of carbon fibre. This sandwich construction is – according to Monitor Audio – ‘just like a perfect piston’ in that it is very light, yet very rigid and very strong. Monitor Audio have been developing hybrid cones for many years, and this is perhaps the company’s lowest distortion model to date.

Even the cabinet has elements of the PL500-II central section in its design, with its curved, elongated figure-of-eight front baffle section, although this is a far cry from the more complex raised and scooped shape of the flagship’s centre section. The cabinet itself is a relatively standard, if tall, rectangular box, albeit finished in satin black, white, or grey to give it that studio appeal. It also features twin HiVe II flow-tuned ports, top and bottom, to give the symmetrical layout of the loudspeakers an equally symmetrical port output. In between these two letterbox ports is a single set of beefy, custom-made rhodium plated terminals, designed to accept spades, 4mm plugs, and bare wires. A matching pair of stands are available and – because the Studio’s footprint is relatively narrow compared to most stands – are recommended.

The difficulty a comparatively new Monitor Audio product has to face – especially one that sits outside of the standard ranges – is inertia. People over the years have come to love what the standard ranges do, and often look to more of the same, so when something comes along that does the same things differently, the reactions can be mixed. And the Studio lives up to the name – it’s a very resolving studio monitor-style loudspeaker that would not look or sound out of place sitting atop a mixing desk. If you look to your speakers to add that little bit of warmth, smoothness, or richness, look elsewhere. The Studio is all about speed, detail retrieval, precision, and focus. It also has surprisingly good bass given the size of the cabinet and the drive units.

It’s not just about the bedroom DJ or home studio market – although the Studio does fit these markets almost unfeasibly well – it’s about those who want to hear the bare-faced truth about their music, in a way that one doesn’t normally expect at anything near this price. That might be something of a double-edged sword (the electronics the Studio is likely to partner and the musical material it is likely to be fed is unlikely to be carefully massaged audiophile-grade stuff, and the Studio will lay those limitations bare), but coming from the high-end on down, many will see the Studio as an inherently ‘right’ – if uncompromising – transducer in the Magico vein. Which means that those wanting a pair of Magicos that have neither the room nor the depth of wallet to own them now have something with a broadly similar sonic performance at an affordable price. It’s strange, but this is more likely to attract new customers/ listeners than those from the existing Monitor Audio market. 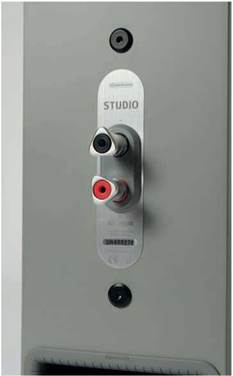 That’s missing the point; the Studio is all about detail retrieval. If a guitarist uses a phaser pedal and they meant to use a flanger (one of the differences between the sound of Jimi Hendrix’ and David Gilmore’s FX-laden sounds) you will hear the mistake effortlessly. If a singer needs a spot of AutoTune, you’ll quickly learn to recognise its processing engine’s sonic signature, even at subtle levels. Want to know if that was an alto sax playing low or tenor sax playing high? The Studio will let you into the mix. This is standard fare for more high-end designs. Normally, at this point, you either get something effortlessly musical, but not very revealing, or a loudspeaker that equates ‘detail’ with ‘high-frequency energy’ and the Monitor Audio Studio is one of the rare exceptions to both. It does the detail thing well, without falling into the brightness trap, but it doesn’t fall into the other great pitfall of trying to sound a little bit too ‘nice’ in the process. Studio is meant to be revealing.

The surprising part of the Studio’s sound is the depth of it. There shouldn’t be this much bass coming out of this small a loudspeaker. I played some nasty old school dub through the Studio – the title track from King Tubby Meets Rockers Uptown [Clocktower] – and OK, while it didn’t have the teeth- loosening bass I once heard from a sound system at the Notting Hill Carnival a few years back, the level and precision of bass coming out of these, that deep bass-line wasn’t lost in depth, weight, or intensity. Full-range it is not, but it is still deeper and more honest in the bass than a speaker this small has any right to be. The speed of the Studio was also clear from those rim-shots and the detail let you hear the truly dreadful quality of the echo (which paradoxically kind of makes the track). This is the kind of track that needs the loudspeaker to start and stop almost instantly because there is so much being fed through the reverb and echo, and these need to be very clearly delineated, and the Studio does this exceptionally well, making most loudspeakers sound sluggish by comparison.

This is more than speed of attack, though; the Studio also preserves the harmonic structure of that sound. In fact, it’s a lot better at unveiling the harmonic structure of more sensitively recorded music (dub’s great but was never recorded for its audiophile qualities). And you don’t get much more harmonic than Cannonball Adderley on his legendary Somethin’ Else album [Blue Note]. Here, the richness of his playing (especially through a CD made before the late Rudy Van Gelder took to remastering his own recordings in his twilight years) comes through well, with the sax soaring away into the upper registers, the underpinning of the piano, and the overall focus of the sound extremely beguiling. Add to that a very precise image, with instruments easy to place and position within a surprisingly large soundstage, and it’s clear the Studio punches above its weight. But most of all, it’s that midrange clarity that is most seductive; the speaker simply draws you into the mix, unobtrusively and uninterrupted. It’s a very transparent presentation that befits the name. And similarly befitting the name, it’s more about detail retrieval than dynamic range. The dynamics are ‘good’ (especially the micro-dynamics and that way of resolving small musical details in the midst of lots of musical ‘goings on’), but don’t expect musical fireworks to be overstated. This is not an over-refinement, but a part of the Studio ethos, because dynamics are often something to be tamed in the studio.

The downside to the Studios is they are demanding of installation and equipment partners. The comprehensively-languaged manual limits the instructions to three feet from the side walls, eight-to-eighteen inches from the rear wall, and six to ten feet apart, with a proviso about experimenting with toe-in, and a hundred-hour run-in. It makes almost no recommendations about electronics and speaker cables. That will get you a sound that is detailed and – if you get them the right distance from the rear wall – with good bass, but musically soulless and undynamic. Throw some good electronics at them (this doesn’t need to be a power-house, I used the Sugden Sapphire pre/power amp combination tested in issue 158), some really good cable (The Chord Company is your friend here!), and approached the installation with the kind of OCD intensity. In return, the Studio eventually unveiled the more dynamic, more expressive, and more passionate performer inside the boxes.

The Monitor Audio Studio doesn’t re­write the rulebook, it doesn’t change the laws of physics (Cap’n), and it doesn’t spell the death-knell for the rest of the Monitor Audio range. Instead, it’s a worthwhile addition to that portfolio, more than living up to its name with an incredibly detailed performance in the near-field that is hugely reminiscent of the sound of the control room. It might not be for everyone, but if more recordings were mastered through these loudspeakers, we’d have better recordings!

A studio speaker rarely needs to be dynamic (dynamic range is never an issue that close to the original instrument) and the Studio reflects that up to a point, but careful installation and partnering can expand the perceived dynamic envelope considerably. If you look to loudspeakers as providing a window on the recording, the Monitor Audio Studio is one of the cleanest windows you can get for the money. +