This 16-channel AV processor promises to sound perfect in any room. Steve Withers pricks up his ears. Read our LYNGDORF MP-60 Review.

Any company that christens its room correction system RoomPerfect must be confident it can live up to such a moniker. It’s right there in the name. Anything less than sonic perfection and you’re opening yourself up to a world of criticism. The MP-60, the new 16-channel AV processor from Danish manufacturer Lyngdorf, is designed to deliver exactly that: the perfect room.

Under the auspices of audio whizz Peter Lyngdorf, the company has been pioneering digital solutions to acoustic problems for decades – from the first Class D amplifiers to sophisticated room correction. The latter stems from years of research into compensating for the negative impact of a listening environment; four iterations and over eight million dollars later, the result is RoomPerfect.

Lyngdorf offers products ranging from digital amplifiers and CD players to speakers and subwoofers. The MP-60 is its new top-flight AV processor, although those who want

to save themselves one-and-a-half grand, or simply don’t need 16 channels of processing, have the option of the 12-channel MP-50, which also benefits from RoomPerfect.

The MP-60’s room correction prowess notwithstanding, it’s impressively specified: there’s Dolby Atmos, DTS:X (the Pro version will be added via a firmware update in the summer) and Auro-3D decoding; balanced XLR outputs for 15.1 discrete channels; a host of connections; and plenty of high-end features. About the only audio format it doesn’t support is IMAX Enhanced DTS:X.

A gorgeous piece of industrial design, all sharp lines and Scandinavian cool, the MP-60 is fantastically well-made. The gloss and matte black finish is extremely eye-catching, and the large display is simple, clear and informative. Aside from a standby button and a source select knob, the only control on the minimalist chassis is a large volume dial that’s wonderfully granular in operation.

It’s the kind of AV kit you really want on show, rather than hidden away in a rack – although that is an option. The good news is that if you do have it in the room with you it’s effectively silent, only needing basic ventilation rather than noisy fans to stay cool.

Lyngdorf’s dedicated remote control is as sleek and stylish as the processor itself. It’s a slender wand that’s intuitively laid out, and offers a choice of IR or RF control, which is a nice touch. There’s no backlight, though. The MP-60 is primarily aimed at the custom install market and supports systems such as Control4, along with a web-based interface.

For those married to their smart devices, there’s a remote app that provides basic functions like input selection and volume level, along with direct control of a built-in media player. There’s also support for Spotify, vTuner and AirPlay, with Roon to be added soon.

The MP-60 has an onscreen menu system, but this and its controls are also accessible via the excellent web 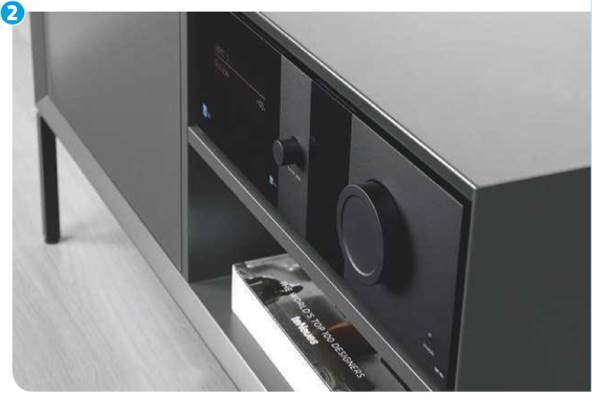 1. A large display and volume control dominate the front panel

interface. There’s no Wi-Fi, so you’ll need an Ethernet connection, but it’s useful being able to perform a detailed setup and run RoomPerfect remotely.

The processor’s rear panel is dominated by the 16-channel XLR output bank. Sitting below it are eight HDMI 2.0b inputs, two HDMI 2.0b outputs (one supporting eARC), and an HDBaseT output. The lack of HDMI 2.1 is disappointing, but Lyngdorf has already announced an upgrade path for the MP-50, so it would be fair to expect similar for this model.

On the audio side of things, there are coaxial and optical digital inputs, a coaxial output for a second zone, USB-B and USB-A ports, and custom install features including IR inputs and outputs, 12V triggers and an RS232 connector.

Considering the complexity of this processor, it’s surprisingly easy to set up. The user interface is intuitive, and while there’s plenty of opportunity to customise the input and output settings, the majority can be left at their defaults. In fact, a reasonably clued-up enthusiast will have no issue configuring the speaker layout, selecting the crossovers, and running RoomPerfect. Or you could just get your dealer to do it.

The MP-60 ships pre-configured to 11.1 channels with four auxiliary outputs, but you’re free to select any layout you want within the limitation of 15.1 channels of processing. That means you can go all the way up to 9.1.6 channels with Dolby Atmos and DTS:X Pro, or 15.1 if you choose an Auro-3D layout.

I opted for 9.2.4, using a combination of Emotiva XPA-11 (see p42) and Lyngdorf SDA-2400 power amps. I then selected the crossovers, and measured the distances from the initial microphone position to all the speakers and subs using a laser measure, which I then loaded into the MP-60. This is about the only manual aspect of RoomPerfect.

A calibrated microphone hooks in at the rear, and using the included stand you position the mic at the main ear-level sweet spot, pointing directly forwards. RoomPerfect uses test tones to measure each speaker/sub from here, before telling you to move the mic and measure again.

You keep taking measurements from random positions in the room, at various heights and with the mic pointing in different directions, until RoomPerfect has built up a room knowledge of, says Lyngdorf, at least 98%. This is how its approach differs from room correction systems from Trinnov, Dirac or Anthem, which tend to concentrate on measurements around the listening position. The idea is to create an acoustical picture of the entire environment, compensating for aberrations related to placement or the room, while retaining a speaker’s characteristics. Less of a problem with my neutral MK S150s, but a benefit if you favour a warmer sound.

The calibration process produces Focused and Global settings: the first is optimised for the sweet spot, while the second is designed to ensure everyone enjoys a superior sonic experience.

Lyngdorf’s approach doesn’t go for the graphical representation favoured by other systems, but it does provide the opportunity to adjust the voicing. This is an equaliser filter that can amplify or attenuate certain frequencies according to personal preference, and you can save up to 32. You can also backup all your settings to an SD card in the rear, handy if you ever have to switch units.

While RoomPerfect is user-friendly, it’s also quite time-consuming. It took me over two hours, but in fairness I was measuring for 13 speakers and two woofers. But it’s worth putting the effort in, because the results are simply extraordinary.

Picking out the pebbles

The first port of call was my trusty Blu-ray of House of Flying Daggers, with its thrilling drum sequence. This found the MP-60 making light work of integrating my two subs, and rendering the 5.1 soundtrack with exceptional ‘RoomPerfect produces a perfectly integrated, joined- up soundstage. The bass management is flawless’ precision and detail. As each pebble hits a drum, bass is unbelievably tight and exquisitely timed. The steering is also remarkable, not only tracking each pebble, but the corresponding drum too, eliciting a nuanced thump wherever it is in the room.

When Andy Lau hurls his bowl of pebbles at all the drums simultaneously, the processor corrals the amplification at its disposal; there’s an eruption of high-frequency effects, followed by a tsunami of drums. This is the best I have ever heard this sequence in my own room, and put a massive smile on my face.

You can toggle RoomPerfect between Focused, Global and Bypass. Doing so immediately reveals the impact the acoustic correction is having, creating a soundfield that’s cohesive, detailed, accurate and perfectly balanced. You get the sense that everything is arriving in the right place at the right time.

If you want to make the most of all speakers with non-immersive soundtracks, you can choose between Dolby Surround, DTS Neural:X and Auro-3D Auromatic upmixers. These can be very effective, but at present Dolby and DTS require that their upmixing apply only to their specific soundtracks. This mandate should be relaxed when the DTS:X Pro update is released.

The single-take conceit of war drama 1917 (4K Blu-ray, US import) lends itself to a highly directional Dolby Atmos mix. The MP-60 steers its audio objects around in three­dimensional space like a home cinema conductor.

The performance is totally evocative. Our heroes venture into no-man’s land, passing dead horses surrounded by buzzing flies; you can almost smell the rotting corpses. Two bi-planes fly overhead, both distinctly moving from rear to front in the Atmos canopy. A collapsing bunker envelopes you in effects, and as flares fall through the sky during a nighttime scene, the precision of the Lyngdorf’s performance is preternatural.

Actually, the MP-60 is so good that I found myself re-watching old favourites. The DTS:X mix on Jurassic Park (UHD BD) is a triumph in sound design, and none more so than the T-Rex attack. The bass impact of the approaching dino locks in with the telltale ripples in the cup of water, while rain pours down from my cinema ceiling. The beast’s ear-splitting roar slices through the soundfield, while cables snap and ping, and again the output of subwoofers and speakers is expertly intertwined, giving the creature enormous weight and scale.

The MP-60 is a seriously impressive high-end AV processor that looks as good as it sounds. It’s certainly not ‘affordable’, but the best rarely is, and it delivers an exceptional performance with Atmos and DTS:X mixes. RoomPerfect produces an integrated, joined-up soundstage. The bass management is flawless, and you don’t need a PhD to get the most out of it. After living with the Lyngdorf MP-60 for quite some time, I’ve come to the conclusion it’s the best home cinema processor I’ve ever heard.